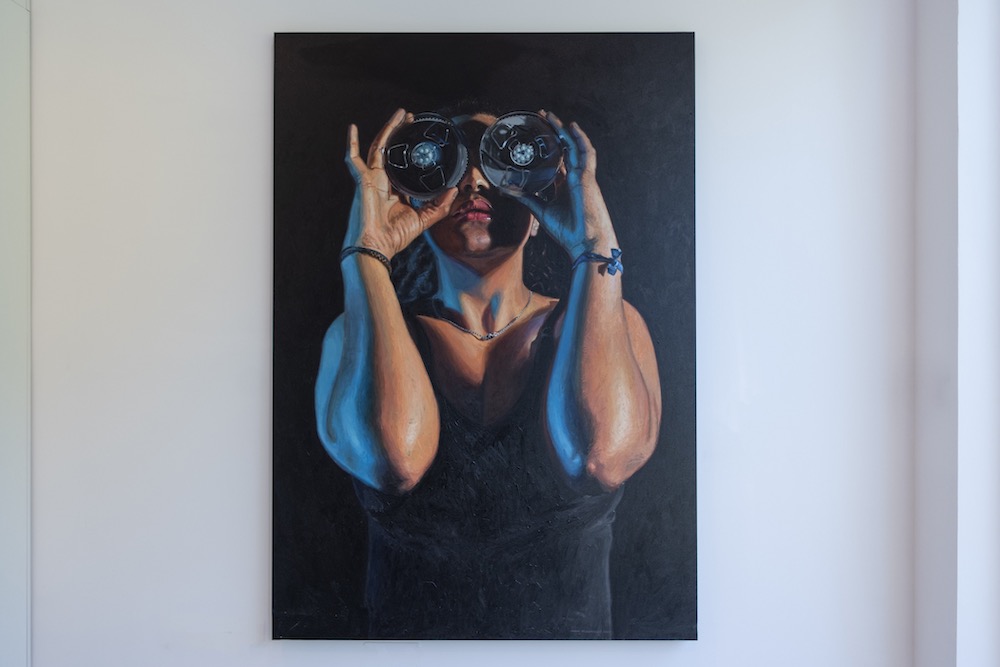 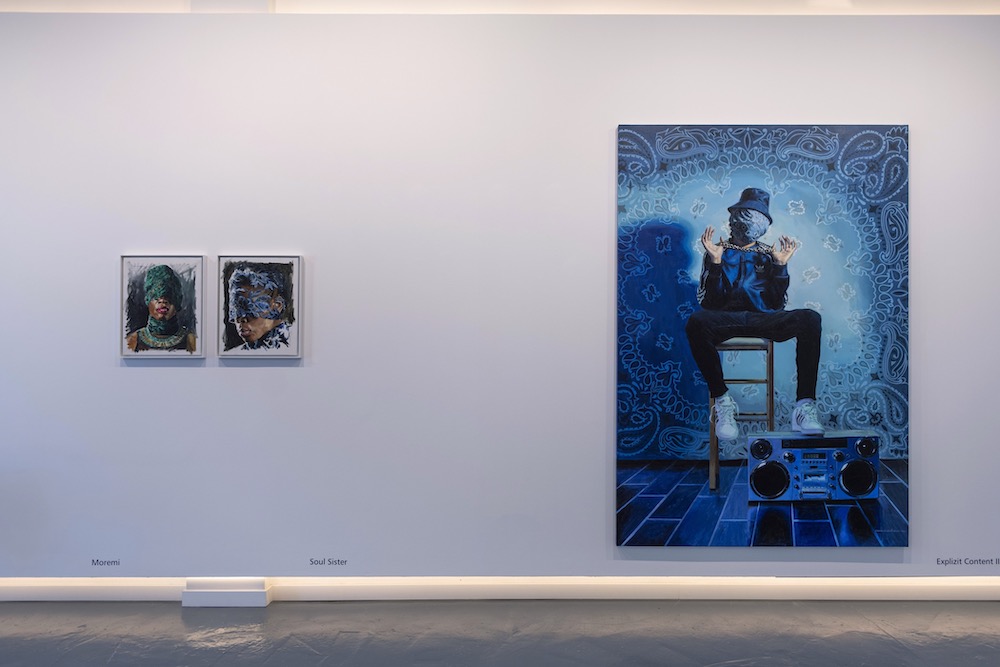 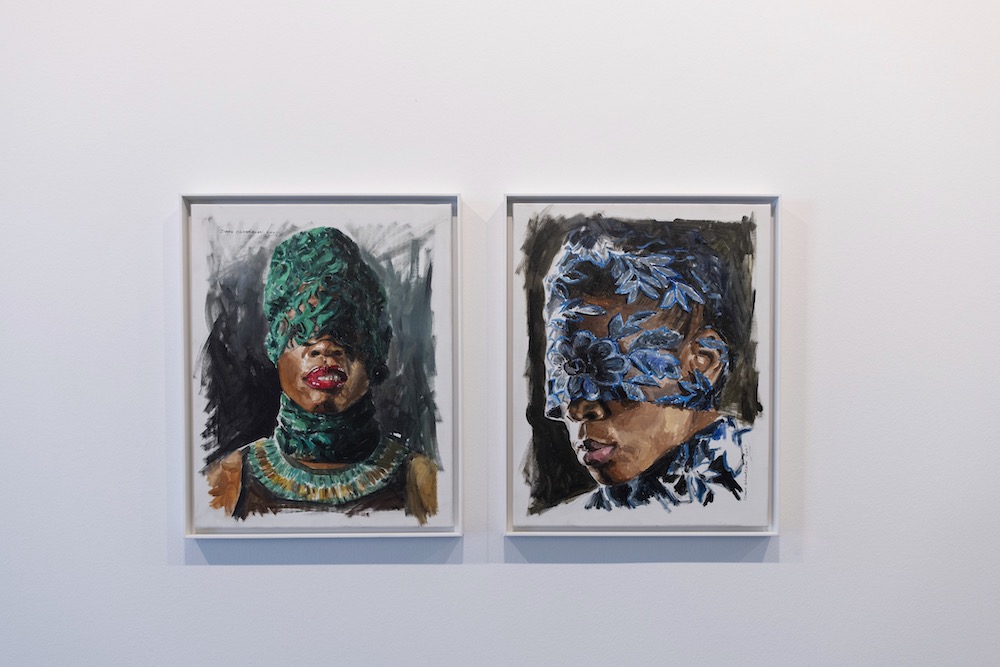 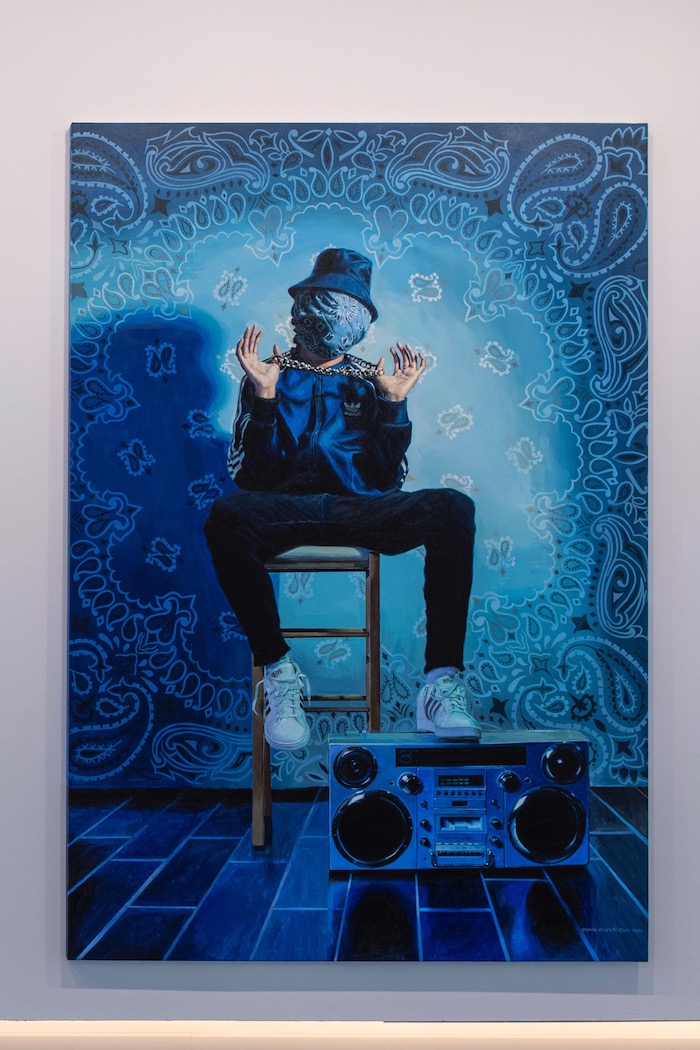 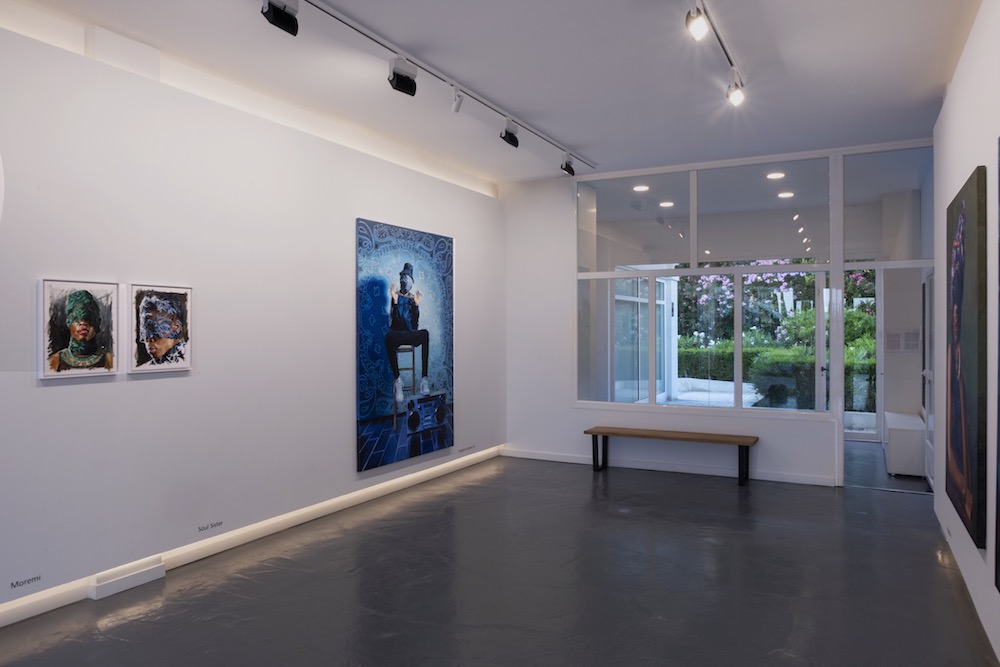 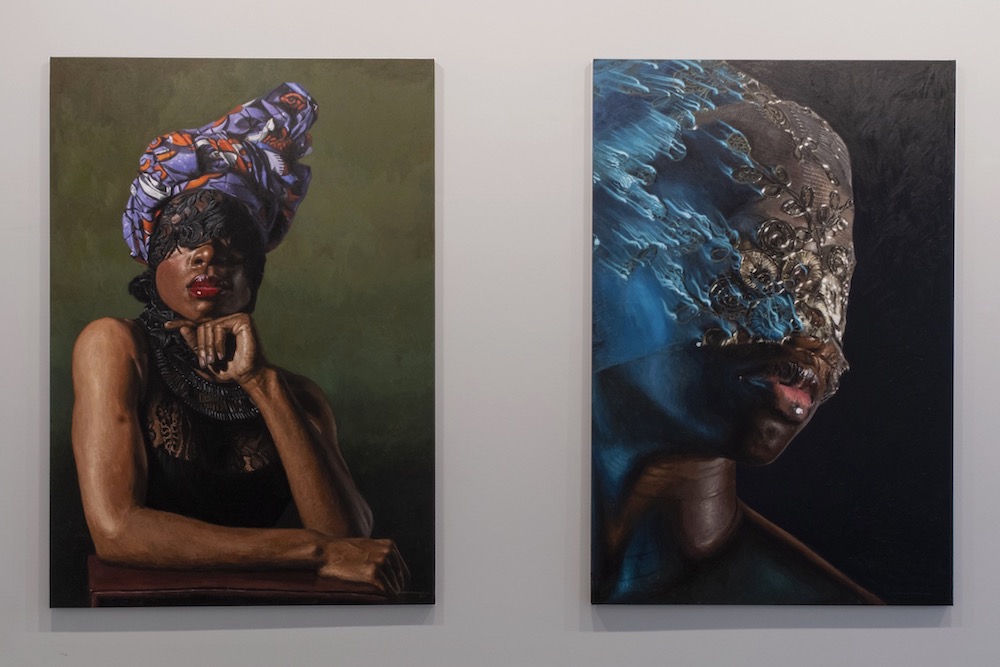 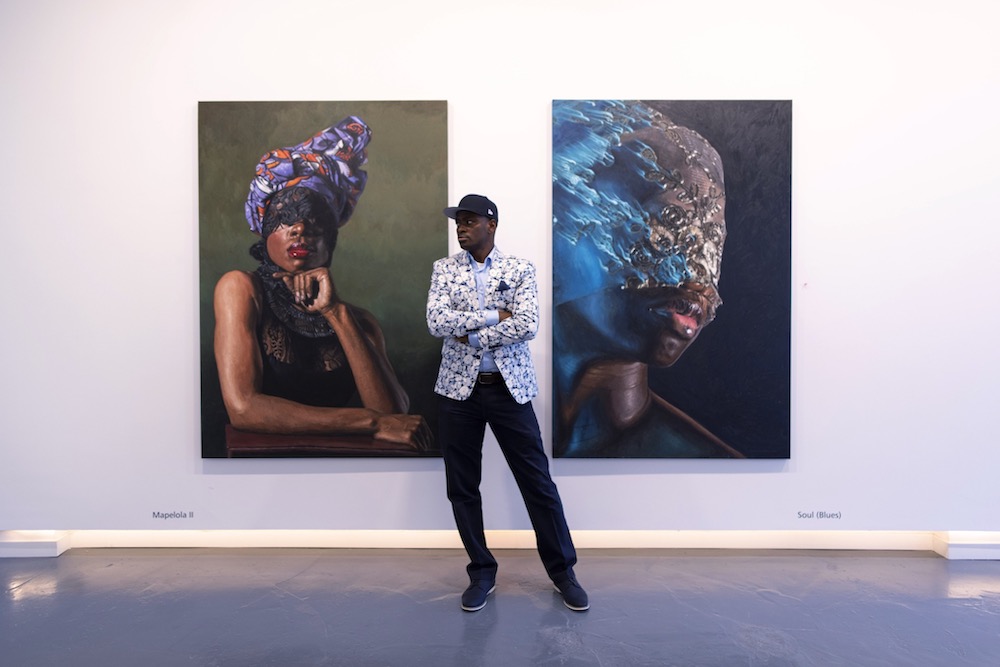 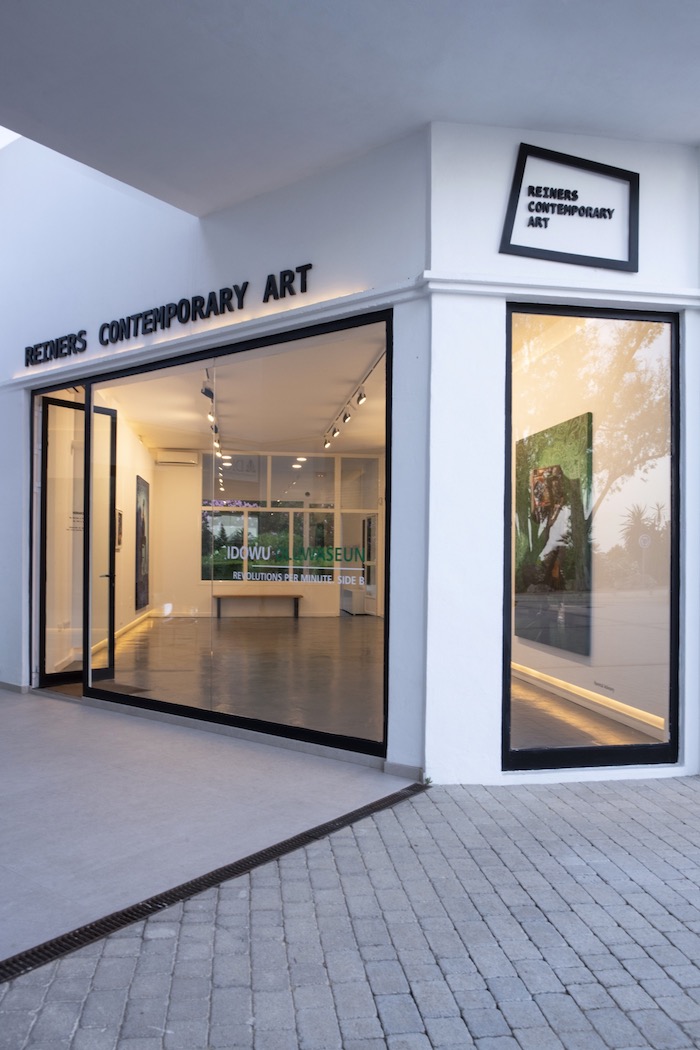 After introducing the Side A of this body of work with Galerie Voss in Düsseldorf, Germany in October 2020, Nigerian-born and Houston-based artist is currently presenting the "Side B" of this series with Reiners Contemporary Art in Marbella, Spain through August 28th, 2021. Comprising new big-scale acrylics on canvas, along with acrylics on linen studies, the exhibition will continue Oluwaseun's exploration of his own culture through reinvention of evocative elements from his upbringing. With a focus on music and fashion as some of the most impactful elements that resonated with him and his generation worldwide, the artist constructs poetic metaphors about his homeland past, present, and future, while creating an emotive and empathic link with the rest of the world.

Growing up in a country deeply scarred by its unjust past, Oluwaseun was regularly exposed to traditional photo portraits of the local people proudly presenting their trade, promoting their business, and displaying most prized possessions. Often dressed in traditional robes, these composed images had a goal of displaying the likeness, personality, and even the mood of the person, with a focus on the eyes which were meant to engage the subject with the viewer. Painfully aware of how difficult it was for these people to achieve such a level of success and recognition, the artist started painting anti-portraits of sorts, in which the eyes and the faces of the sitters were obscured with pieces of cloth.

The same vibrant colors and flowing patterns that were flaunted proudly to express community status and cultural bond are turned into a symbolic social nuisance. As a sobering reminder of the historic atrocities that shaped up the country and the region, these images are also a striking metaphor for the global disregard of the culture and the people of Nigeria as well as Africa as a whole. And aside from these locally engaged themes, his lace-covered female portraits are speaking of subjects’ vulnerability in regard to social and economical justice, clearly tapping into the pressing topic of gender inequality. Hiding behind the delicate see through fabric, these women are tirelessly yet vainly seeking an escape from their unfair surrounding which evaluates them based on their appearance.

In order to further connect his native tradition and history with the rest of the world, Oluwaseun’s work is permeated with broadly recognizable references to music, fashion, and popular culture. Thoroughly employing the power of music as a universal language, the artist regularly includes imagery of record sleeves, boomboxes, or cassette tapes, to construct relatable yet thought-provoking visuals. His fashionable subjects dressed in Adidas tracksuit, Chucks sneakers, Kangol hats, are transferring the viewer to the 90s while exposing a striking difference between how those years might have been experienced in different parts of the globe. At the same time, such a refined approach to choosing and depicting the outfits, connects the artist’s deeply rooted interest in fashion along with his sincere enthusiasm for painting the fabric folds and the play of light on its surface.

As a nod to the works of old masters, Oluwaseun puts a lot of attention to the composition and the mood setting of his reference imagery with a major accent on the anatomy, volume, flow, color scheme, and the light play. At the same time, although working within a realm of meticulously refined realism, he insists on keeping his brush strokes, pigments, and textures visible and leaving an evident human mark on the surface of the canvas. Each of these technical elements are carefully chosen and adjusted so they contribute to the very essence of his practice - passing his emotive message across.

Finally, Oluwaseun’s fascination with music surpasses the general connection with certain melodies and is instead celebrating its healing, uplifting, encouraging, and strengthening abilities. Reminiscing of songs and artists that kept the spirit of his people high at the darkest of times, he appropriates melody, harmony, and rhythm with almost magical abilities. Cleverly integrated in his borderline surrealistic imagery with accentuated and suggestive light settings, these elements add to the mystic ambiance in which his dignifying subjects exist. This interdependence between the identity and the music extends all the way to the poetic yet resolute title of the two presentations and the body of work as a whole. As the beat of the tune stimulates the heartbeat of the people, inspiring and supporting the continuous struggle for fundamental changes towards justice, equality, and recognition, the artist portrays the subsequent Revolutions Per Minute. —Sasha Bogojev