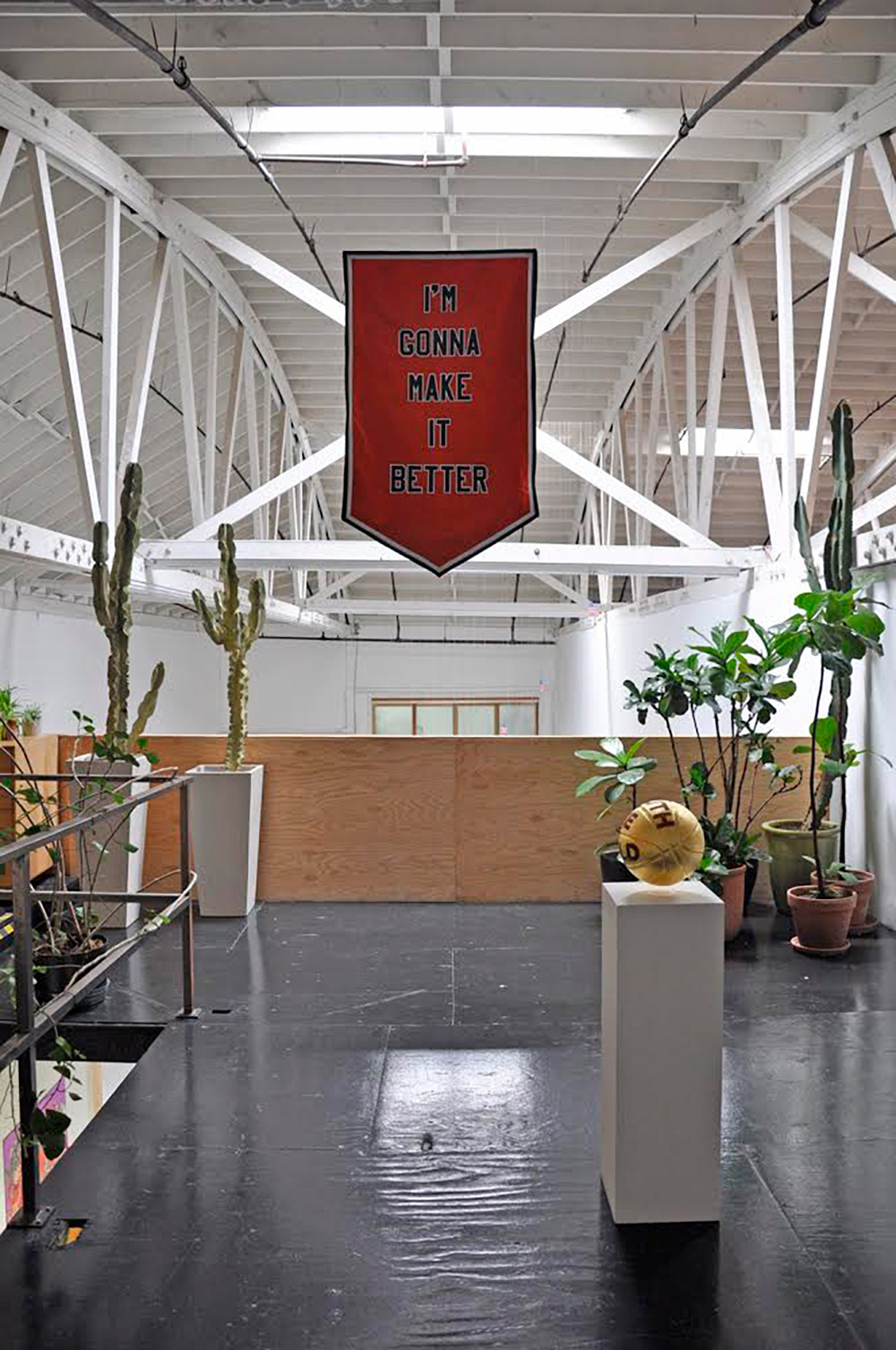 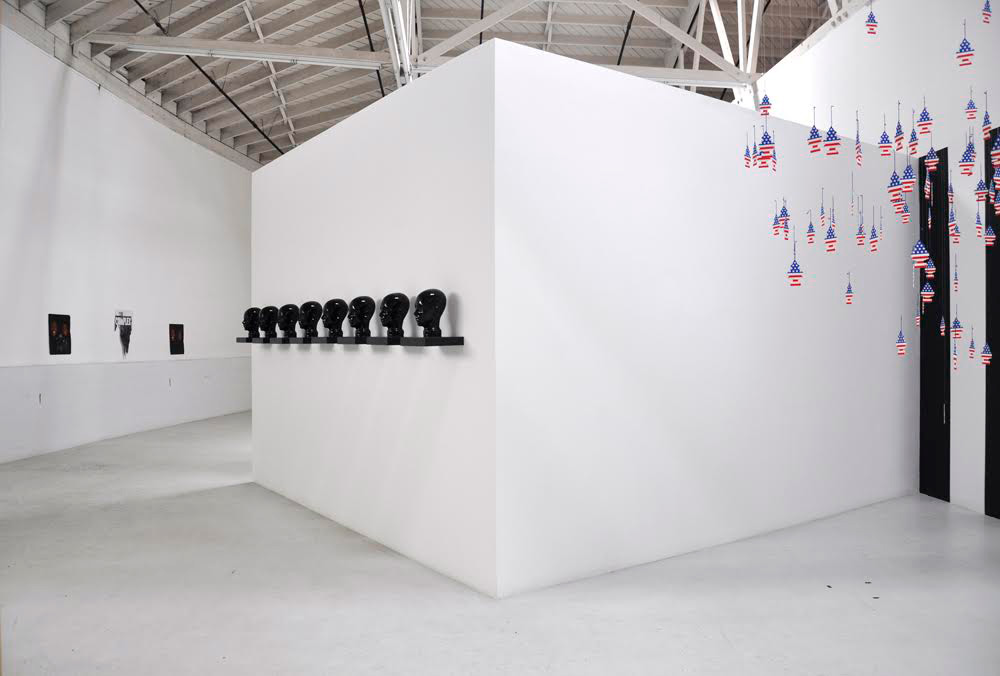 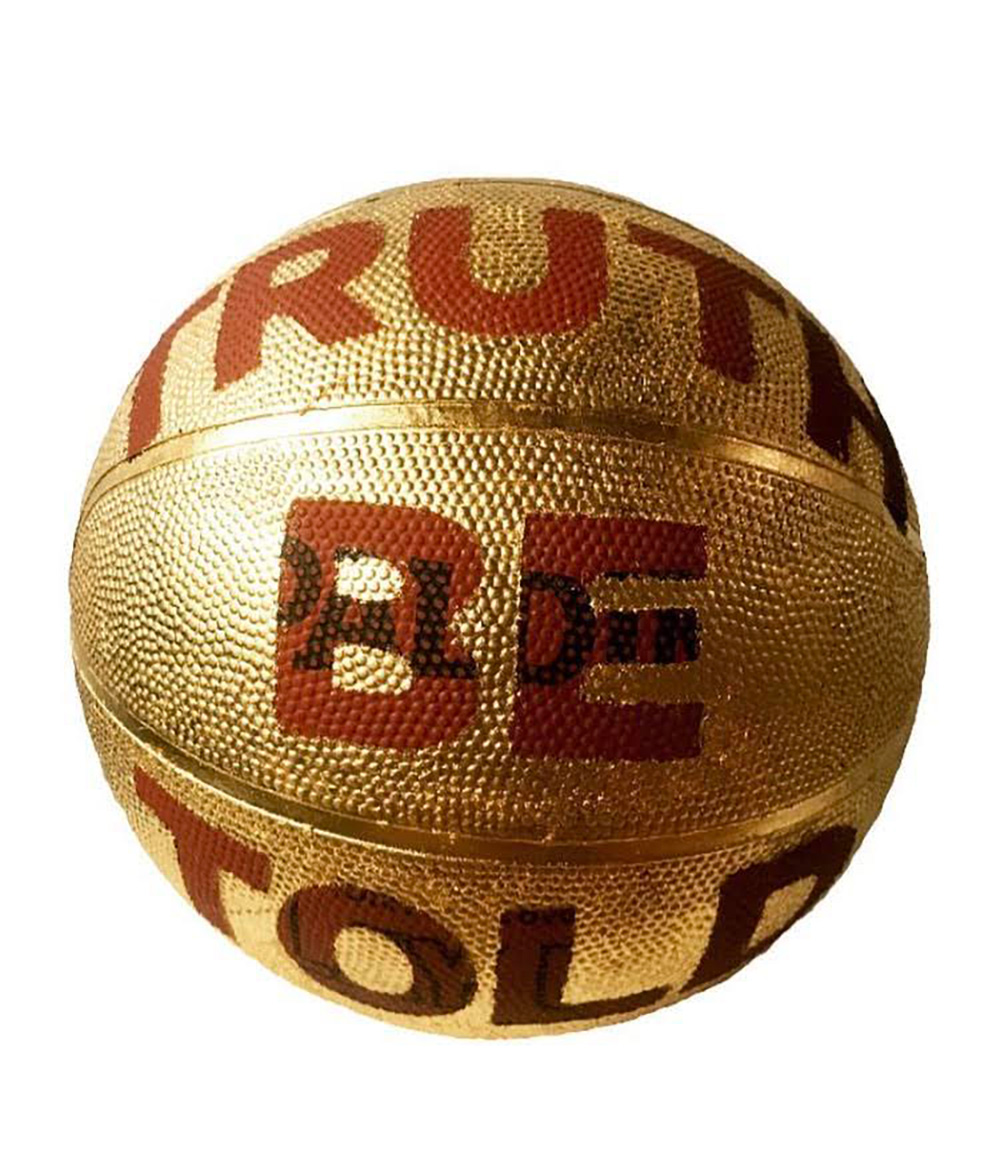 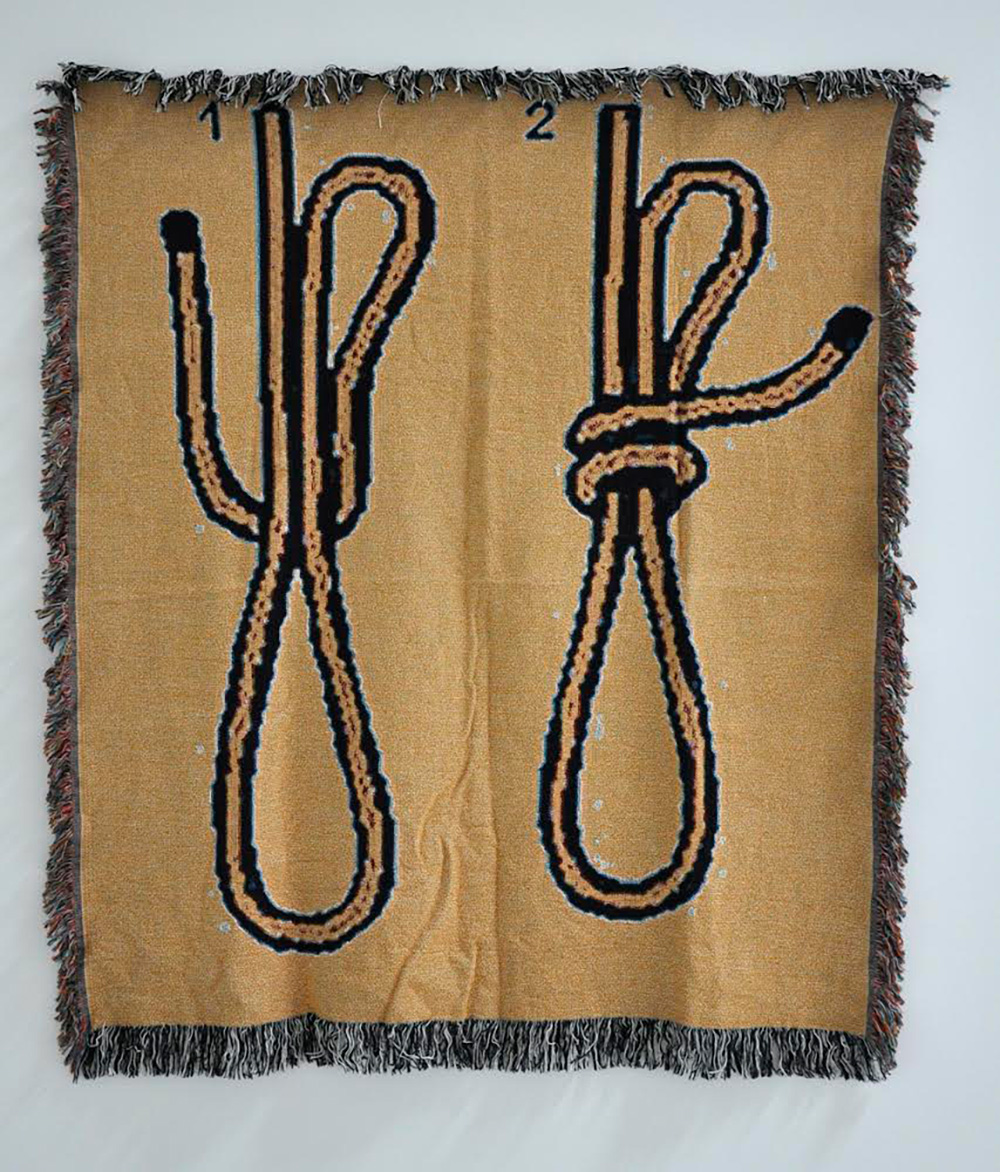 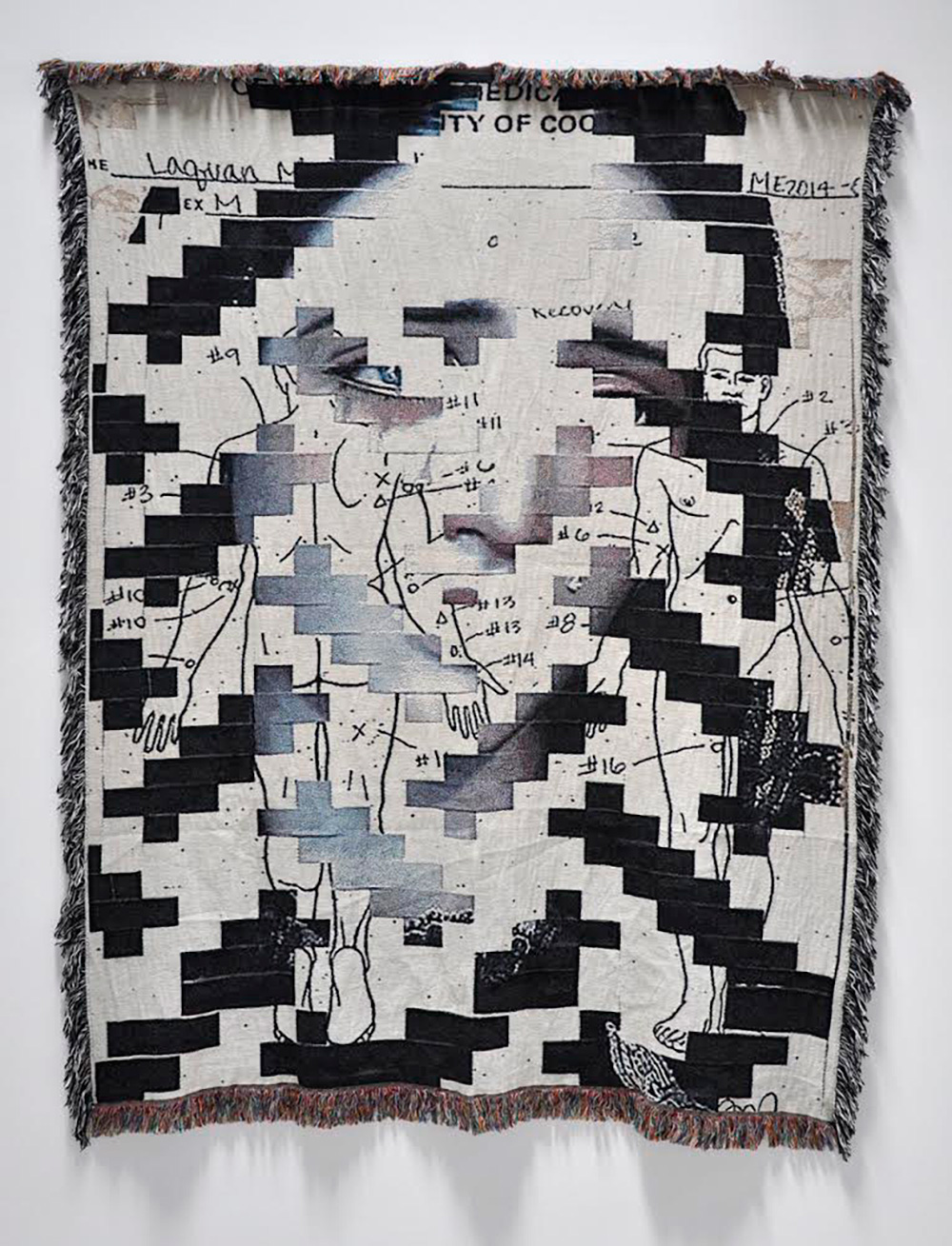 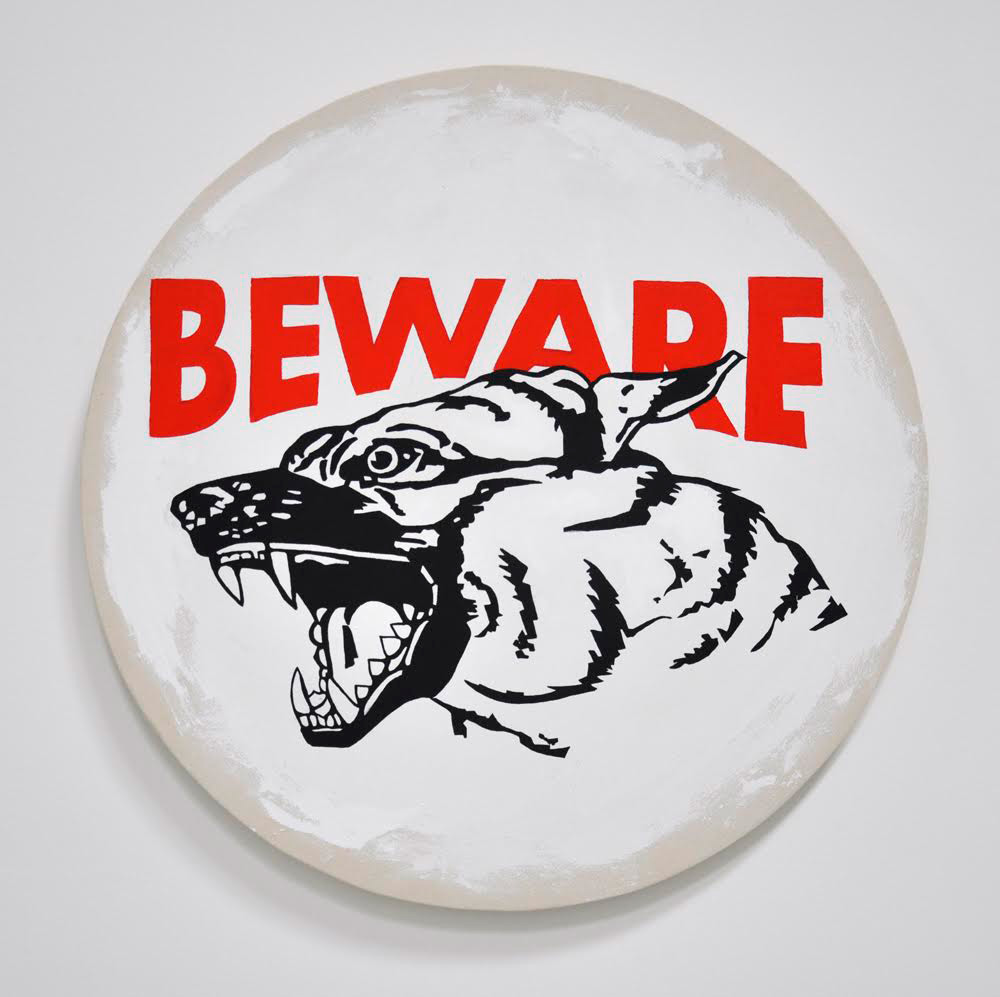 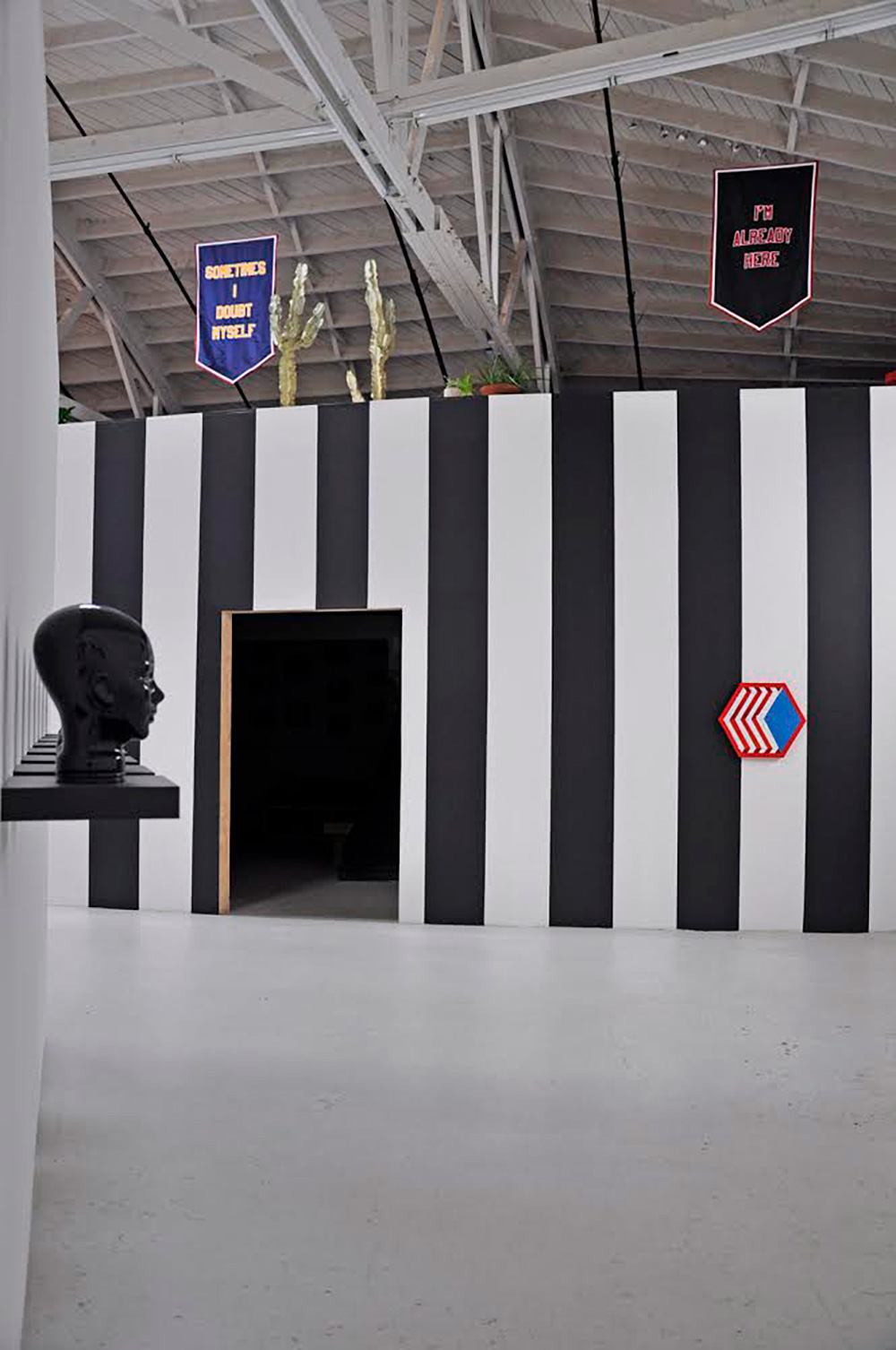 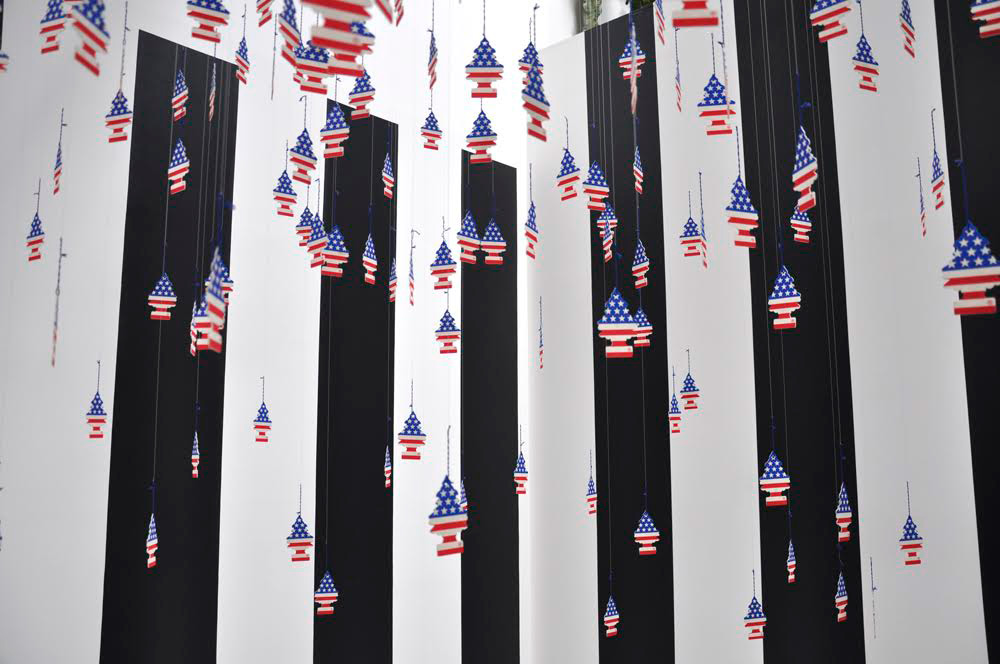 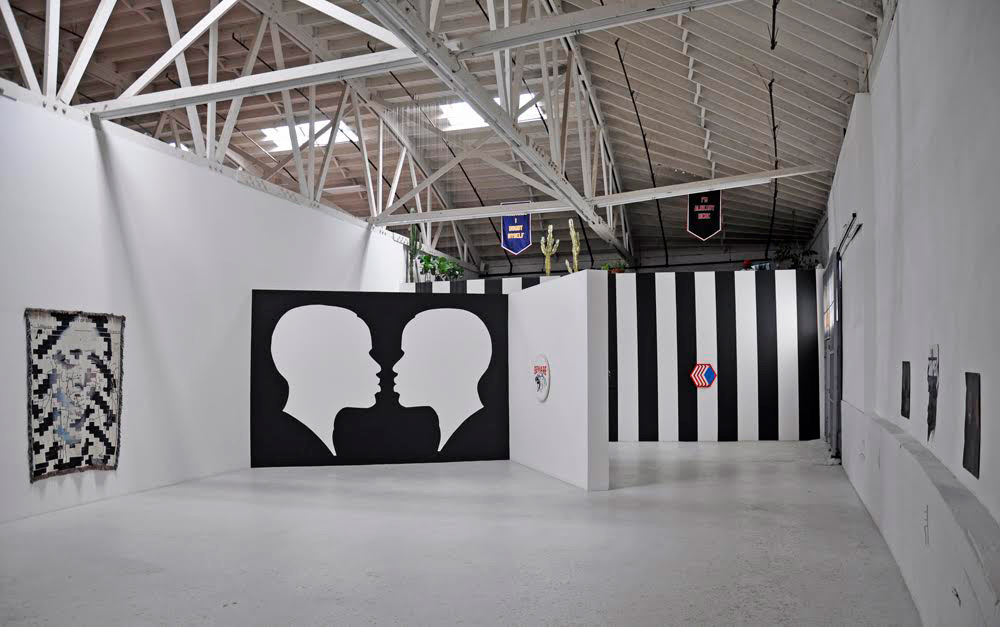 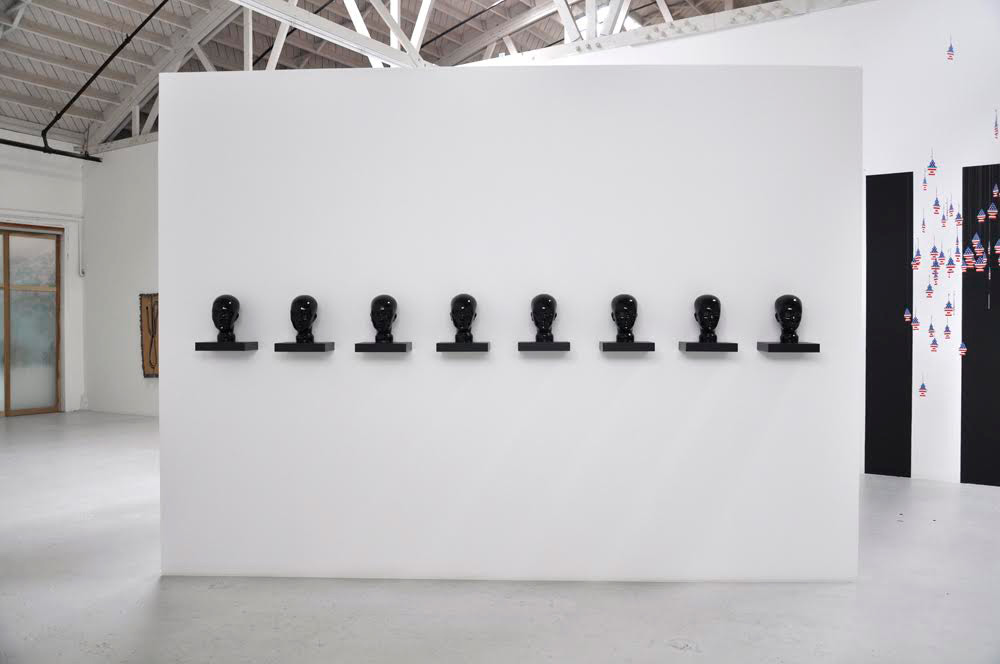 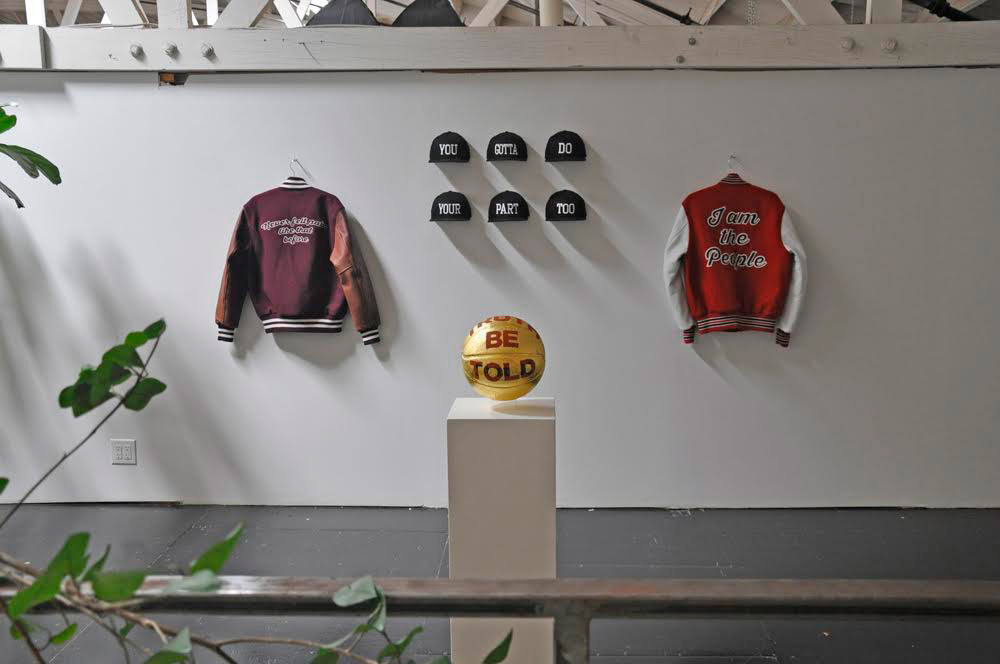 Guerrero Gallery opened two new shows for the month of June. On one side of the gallery is Tosha Stimage's 'A' and 'Op' Position to Nation, and on the other side, Cheryl Pope's TRUTH BE TOLD. The interplay between the two shows highlights culturally introspective works that explore race, politics, nationhood, victory, belonging, and struggle. Read on below for more in depth descriptions of the two shows, with quotes from the artists.

Tosha Stimage, 'A' and 'Op' Position to Nation

“I am fascinated by the negotiation of historical and present black existence and it’s mediation through symbols. Christina Sharpe’s In the Wake: On Blackness and Being, describes blackness as ‘irresolvable abjection’, and suggests that we navigate this space of blackness and death not by trying to define them but rather to live being cognizant. This show grapples with themes of death, violence, color, nation, and citizenship in a suggestive manner. These objects give voice to a collective social reality, question the shared relationship to space, and reveal the problematic breakdown in their attempts to coexist.” - Tosha Stimage

The Columbus, Ohio-based artist uses a rich symbology to explore themes surrounding the ways in which language often falls short, and how this relates to our concepts of race, history, and self-identification. The exhibition’s title, ‘A’ and ‘Op’ Position to Nation functions much like Tosha’s visual works, with a fluidity in meanings based on the relationships of one thing to another, and the larger effects and significances this shares within our histories and present state of reckoning. Stimage’s impactful exhibition hinges on larger questions of belonging: who does and who doesn’t, how we build meaning and gravity through context as it relates to color and thereby race, and how the pitfalls of language serve to narrow our experiences and understandings not just of one another but ourselves.

Sitting quietly on glossy black shelves affixed to the wall are 8 translucent black glass heads, a monumental wall-painting sits on an opposite wall consisting of a google image search of Moor’s heads floating adjacent. What began for the artist as a simple search on ebay for “black heads” resulted in a deep dive through algorithmic logic and the ways in which it’s defined by and defines our cultural rationale and approximations. The combination of readymade glass mannequin heads and disembodied Moor’s heads floating on crests and flags of European countries strikes an immediate yet unforeseen connection, speaking to a long history of the black body’s depiction, exoticization and malleability throughout European cultures and beyond. The gnashing jaw of a German Shepherd adorns a circular canvas on the opposite wall, with the stark text “Beware”–the aggressive yet simplistic ambiguity hinting to a perpetual state of caution and potential danger.  

Around the corner we’re struck with an odd manufactured scent that feels at times familiar, wafting from a meandering line of automotive air fresheners hovering above. The traditional cut out pine tree design has become emblazoned with a strange and unexpected display of nationalism, stars and stripes replacing the more familiar forest green. A materials list reveals that these are in fact “Vanilla Pride” scented, a coyly constructed display of (white) nationalism–which upon closer sniff reveals itself as a thin veneer of a smell, a cheap and saccharine sweet aroma that should serve not as calming but repellant. And despite the almost comical portrayal of “old- fashioned (vanilla) pride,” we’re left with the lingering questions that weave through Stimage’s, namely of (dis)unity, nationhood and belonging, as well as the underlying anxiety of how we move to Nation.

The raising of a championship banner for any local sports team amounts to a milestone achievement, worthy of widespread celebration and a pause for reflection by all those involved with the game. A banner represents the culmination of a collective dream, from the players involved to those on the sideline. Yet what role does a championship banner play when it’s emblazoned with the thoughts and dreams of those who are still developing and growing–when we instead choose to celebrate the climb instead of those at the pinnacle?

During the summer of 2016, Chicago-based artist Cheryl Pope spent weeks listening to young people playing on New York’s city basketball courts, parlaying loaded snippets from these conversations into the satiny block text and rarefied space of the banner. From statements loaded with confidence and idealism to vulnerable admissions that seem to defy the logic of the space in which their placed–Pope’s project empowers the voices of young people as they define themselves and their worlds through their experiences on the court.

Below the banners are five letterman jackets, six snapback hats and a basketball, all carrying the same statements, with each permutation making us question as much the functions and significance of the objects on which their adorning as the impactful statements themselves. From the significance of the democratic space that is the city park, to the underlying question of why as a culture we choose to champion those who have achieved victory instead of those vulnerable populations who are struggling to do so, Pope is able to redirect our attentions through engaged listening, a practice that we should all engage in more during our troubled times.

Text and images provided by the gallery