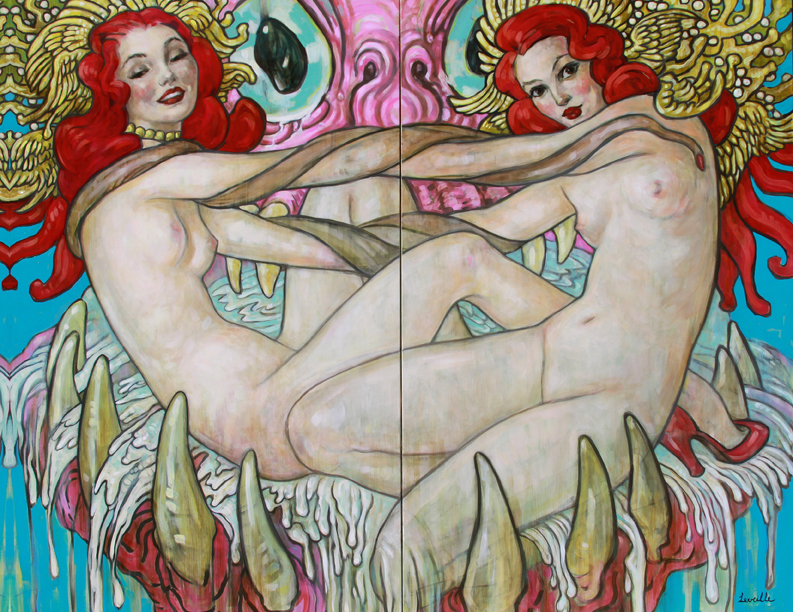 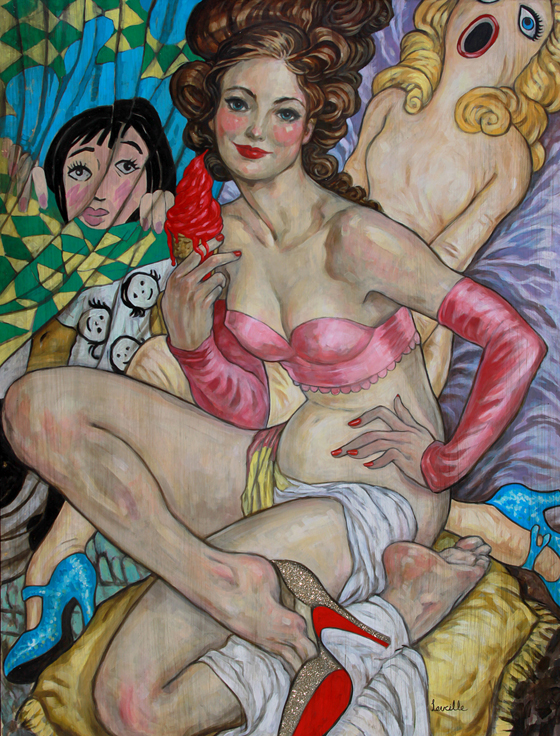 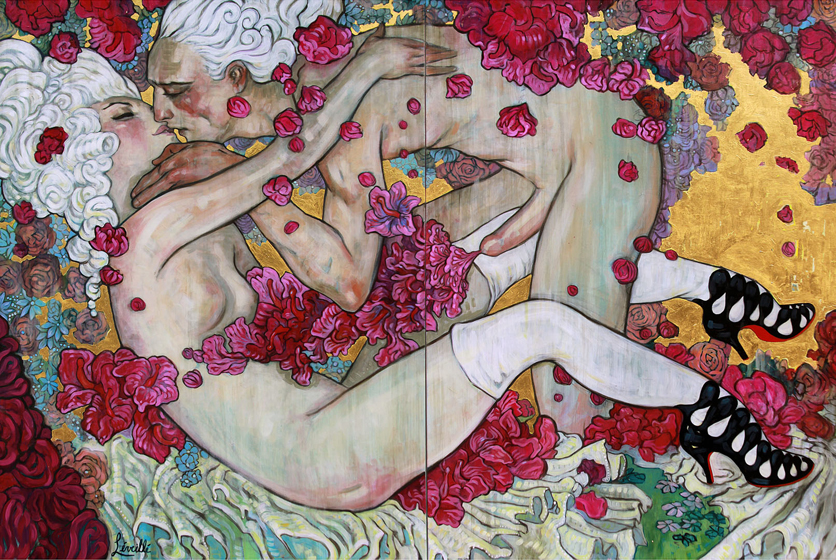 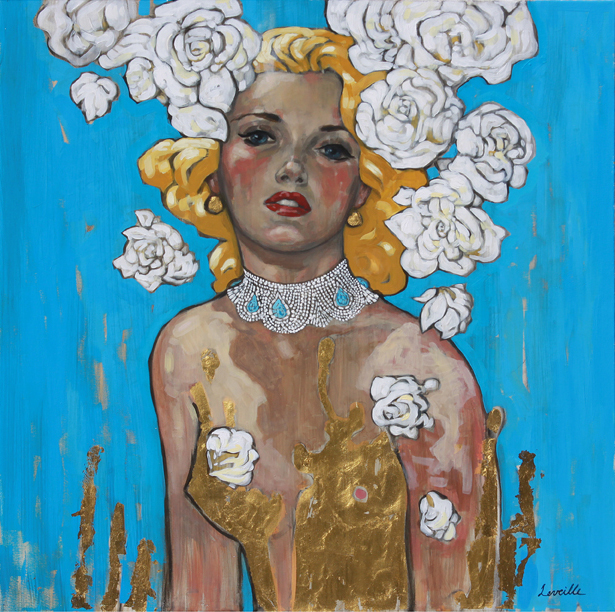 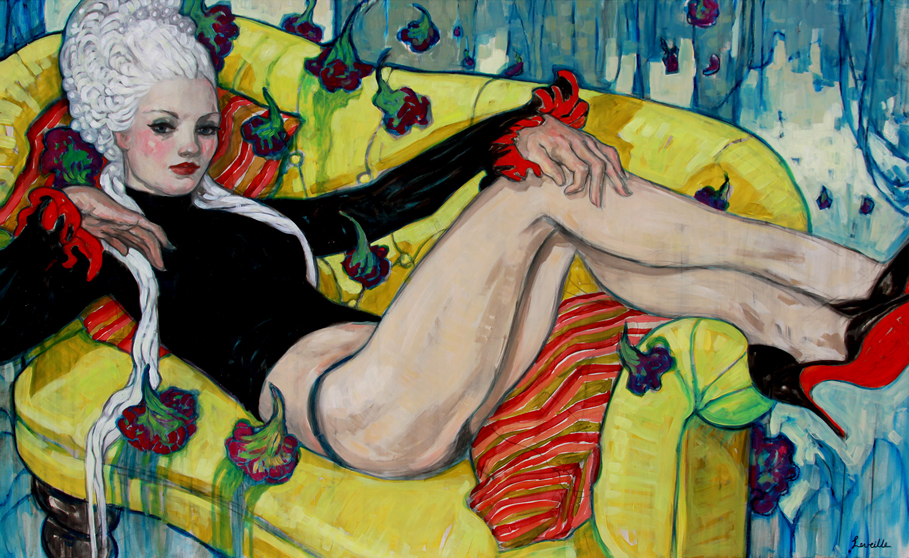 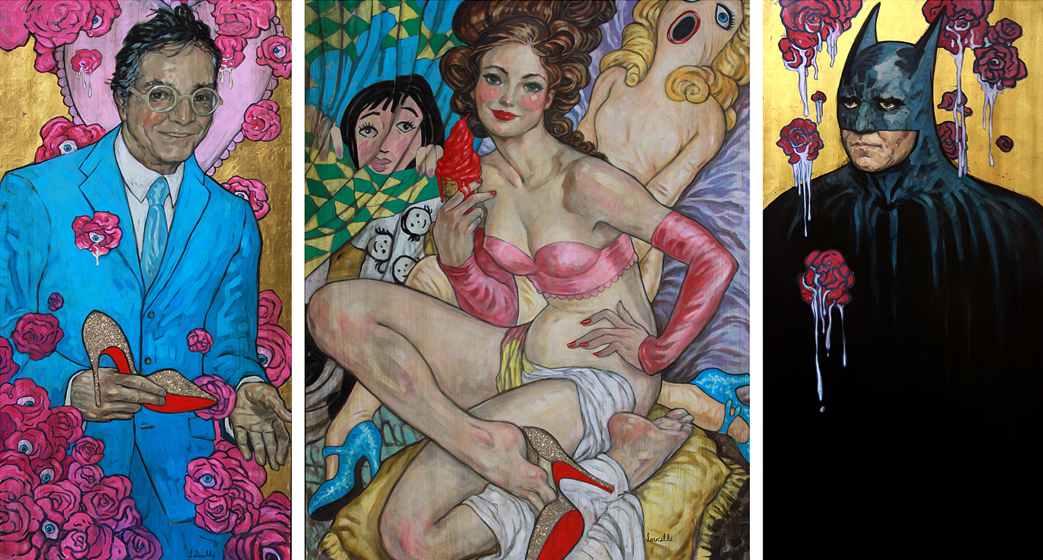 Leveille’s exhibition titled “Savage Garden” presents a series of fourteen paintings that delve into colorful new territory. “In the work there is a very deliberate choice to bring in multiple references and stylistic modes of how the figure, the female form and sexuality has been referred to and combining it with my perspective as a present day woman artist”, she says. Key to Leveille’s work is her unique palette and design sensibilities; her paintings embrace a play on the iconic stylings of Pre-Raphaelite to Modern artists throughout history, from Titian and Vigee Lebrun to Gerda Wegner and Jim Shaw, mixed with a combination of gold leaf and bright colors that guide the emotion of her portraits.

“The images in “Savage Garden” are provocative, playful and pointed. They are a sort of present “passion play” of reality and unreality. Louboutin stilettos are frequently represented alongside 18th century wigs and octopus tentacles, Jeffrey Deitch as Prince Charming, Larry Gagosian as Batman, and direct and luscious sexuality, to deliberately draw the curtain on the stage of the moment we are in right now.” Her new paintings also experiment with traditional symbolism, as in her portrait of a couple making love titled “Flowers”, which re-appropriates the femininity of flowers. “Reinterpretation of symbolic elements are throughout the works. Taking the imagery of flowers, historically used to represent female sexuality, and redefining it as boldly masculine. Using the somewhat manic faces and features of the mid century pin-up aesthetic with the fluid nubile bodies of 19th century feminine artistic ideals. And how that combination feels and creates something new,” she explains. “Reinterpreting often sexist imagery and depictions of women as a woman painter is a way to own the images in give them back again through a different lens.”

The opening reception for R. Leveille will be hosted Saturday, March 26th, 2016, from 7-11pm at Corey Helford Gallery.