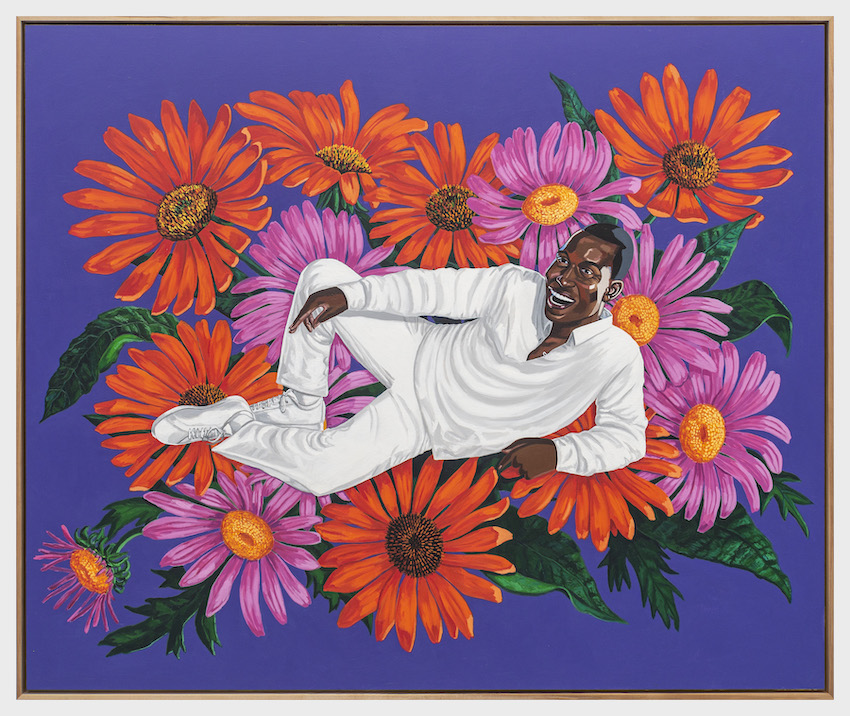 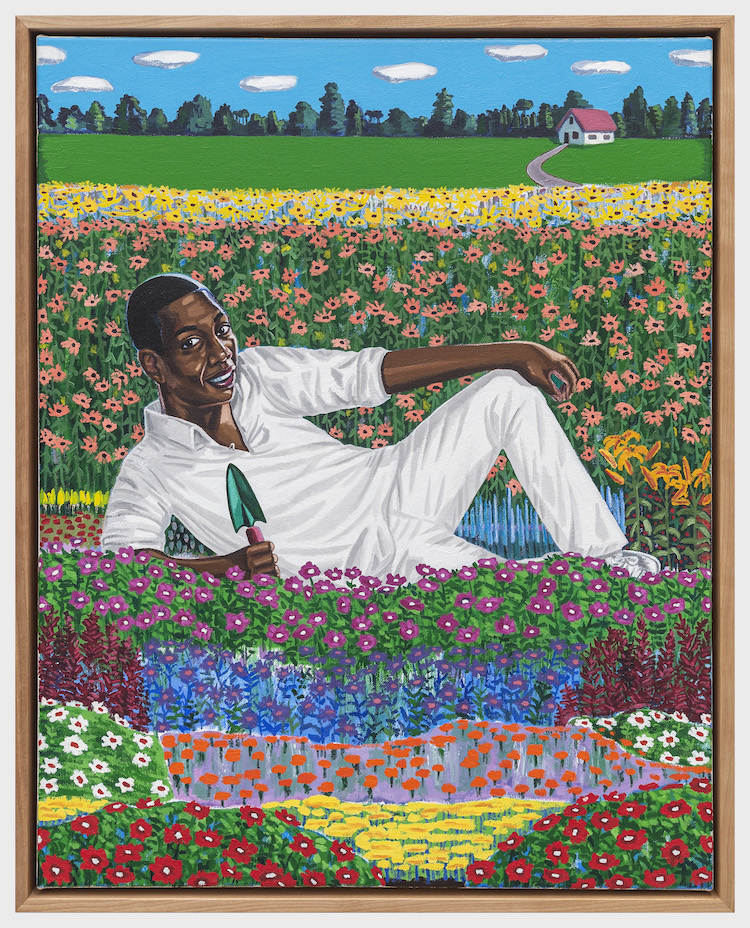 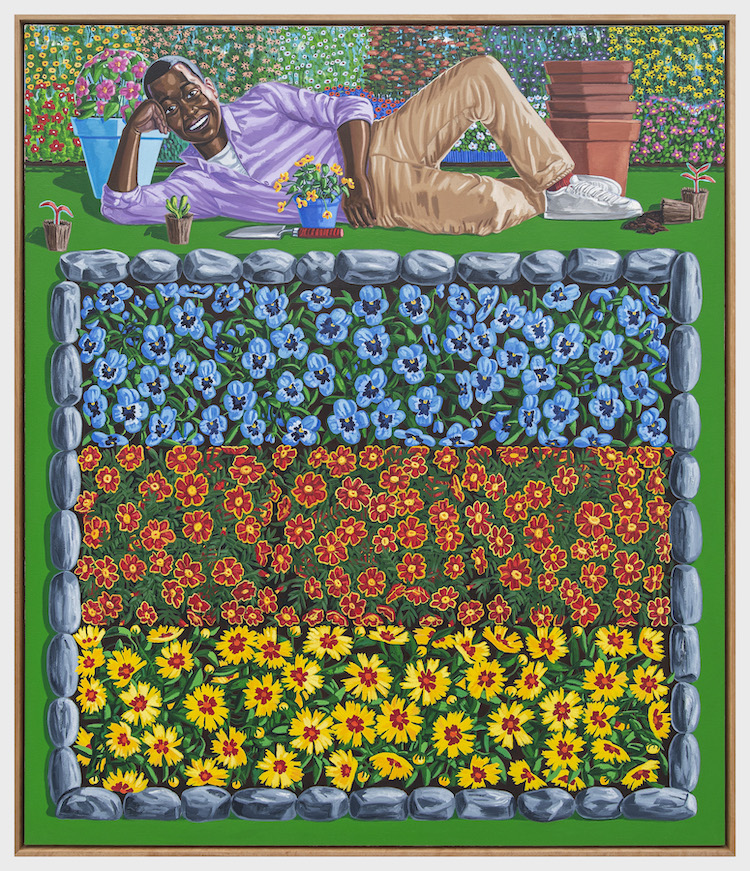 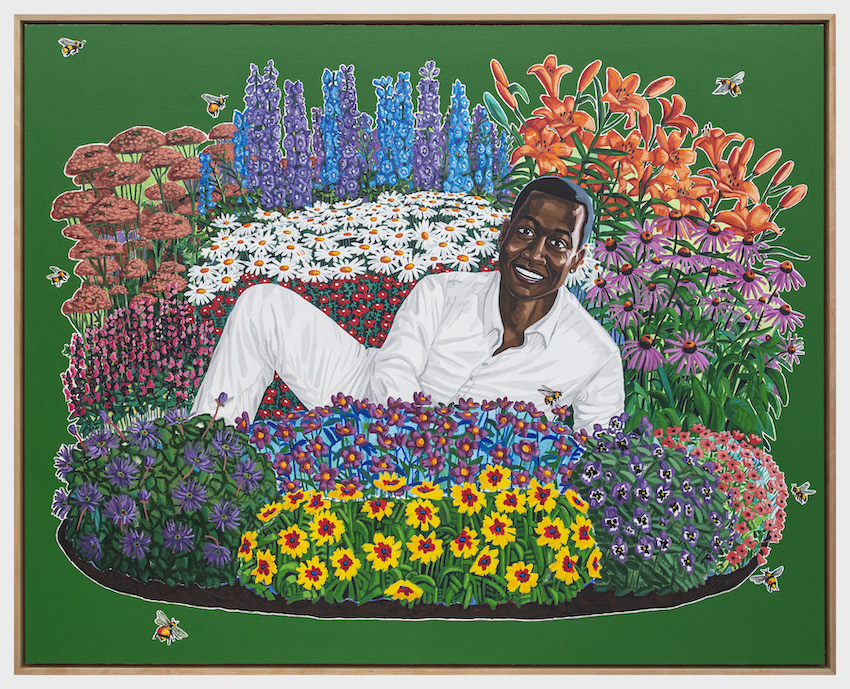 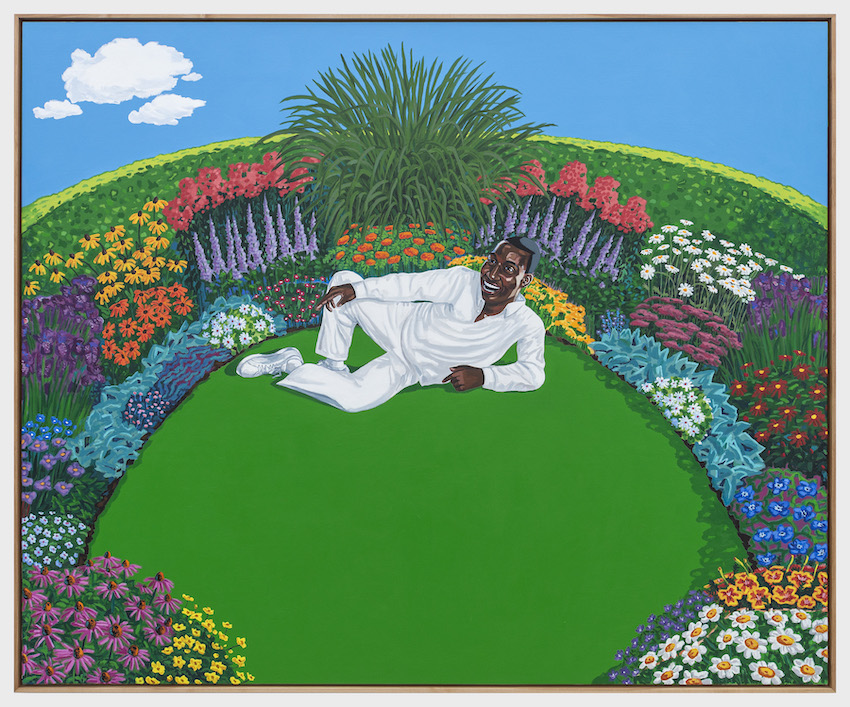 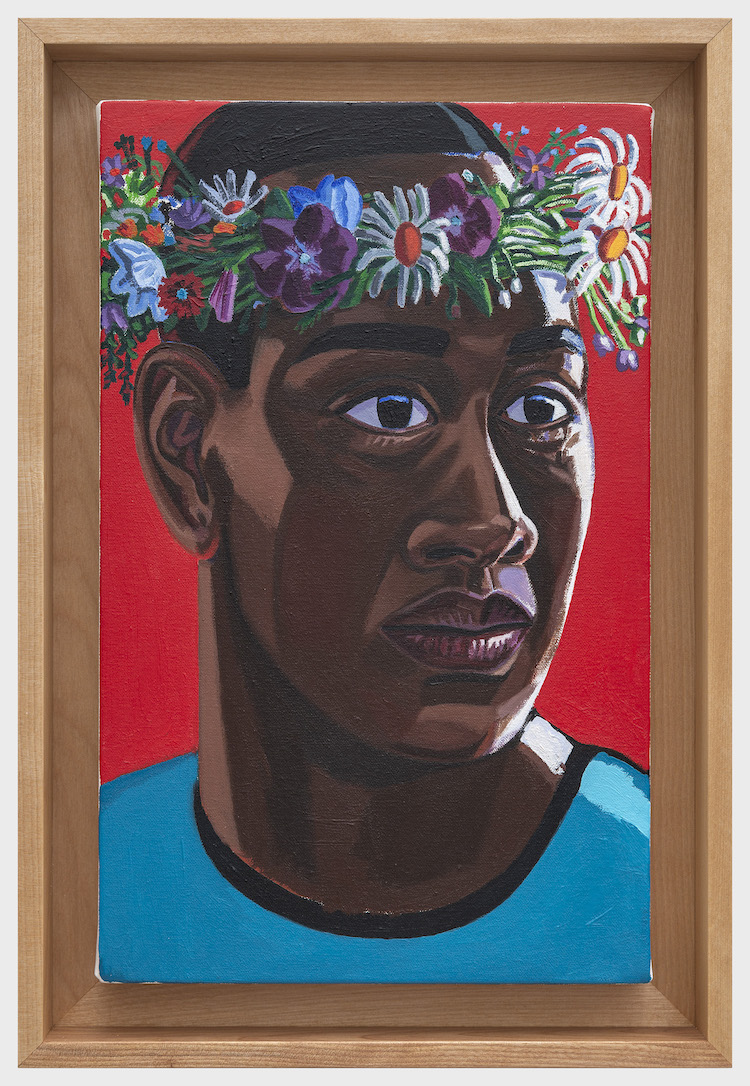 We got a preview teaser this morning of one of our favorite painters and past collaborator/featured artist, Lamar Peterson, as he preps a new solo show, Proud Gardener, at Fredericks and Freiser in NYC.

Occupying a liminal space between the sublime and the quotidian is the inhabited sphere of Peterson’s figures. Bright, candy-colored hues meet graphic figuration that combines the pursuit of painterly flatness with perspectival depth. Brilliant white smiles and relaxed poses heighten the sense of uncanny beauty signaling possible anxieties simmering beneath the surface. In this series of works, Peterson’s distinctive smiling Black man amidst florae remains the central linking character who engages in daily activities like gardening and strolling through nature.

Peterson’s protagonist has served as an explicit proxy for the artist. In works like Lavender Fog (2022), the artist maintains his interest in the modern flâneur which he developed throughout the Covid-19 pandemic as a means of processing the despair, fury, and fear that bubbled around the twinned public health crises of coronavirus and murders of Black people at the hands of public officials. In this painting, a man ambles through green space – he is rendered dozens of times. This small army walks towards the same direction: he is mid-stride, projecting at once agency, determination, and disquietude. Sometimes the negative space between his legs is colorfully amplified as if by an invisible flashlight. Other times, the background seems to wash over the figure, as if drowning his actions.

In Stacked Pots and Flowers, a man lies proudly on the edge of a garden bed replete with vibrant flowers: the flatness of the work and the deliberate framing allows the viewers full access to the organized splay of goods that topple before him. However, this maneuver also lends itself to illegibility as it is unclear if it’s a flowerbed as suggested visually or if it digs into the ground with the man sitting atop, like we’re seeing a sliced excavation of that which has been buried. In the titular and expertly composed The Proud Gardener, a man approximating the godly with a smile that matches the blinding white of his outfit takes position amidst the curvature of Earth. He sits atop the globe, reveling in his strength and labors that have brought to fruition the delicate flowers around him.

Other paintings feature Peterson’s non-definitive proxy closer-up, allowing the audience more intimate access to him. In The Spring Crown, the now familiar figure sports a crown of flowers, collapsing any notion of masculinity that would deny itself the natural pleasures that border his head. Similarly, soft pleasure is communicated in Garden Salad, as a smiling man in a purple apron boasts the literal fruits and vegetables of his labors as he prepares a salad and enjoys an apple. In classic Peterson fashion, the colors are deliberate in their seductiveness and in their refusal to adhere to realism: the man and his salad, along with a sliver of background behind him are rendered in an upside T zone of color while everything else is outlined in black, like a color book waiting to be filled in. This technique unites the artist’s newest works on paper, as if daring his audience to complete this life-giving process of color.

The result of the artist’s rich palette, graphic compositions, orientation of figures in nature, and rigid and angular framing is a tension between what the audience sees and that which is hinted at. Exploring a pleasurable hobby not always associated with or afforded to Black men, Peterson paints seemingly gleeful gardeners who take advantage of moments of respite. Perhaps the artist is flipping the legacy of the enslaved Black field laborer on its head, reclaiming a copacetic and consensual relationship with land. Peterson’s protagonist appears happy, confidently taking pride in his lush gardens. Above all, he appears as the proprietor; often imaged in repose. The man seems gleeful and noble, yet relaxed, as he lies on his side, props his head on his hand, and beams a contagious smile.