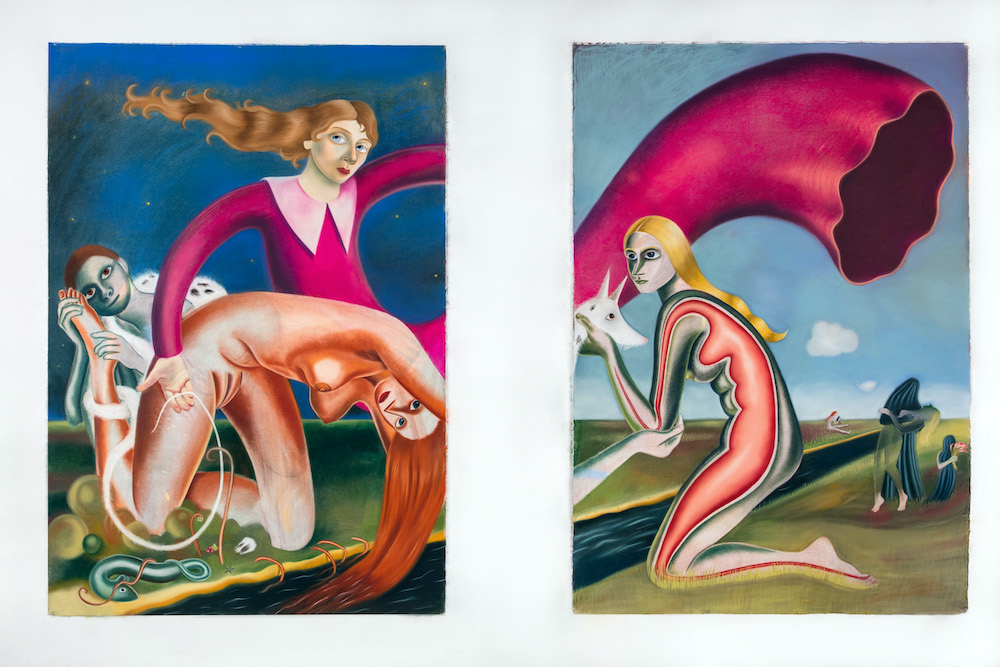 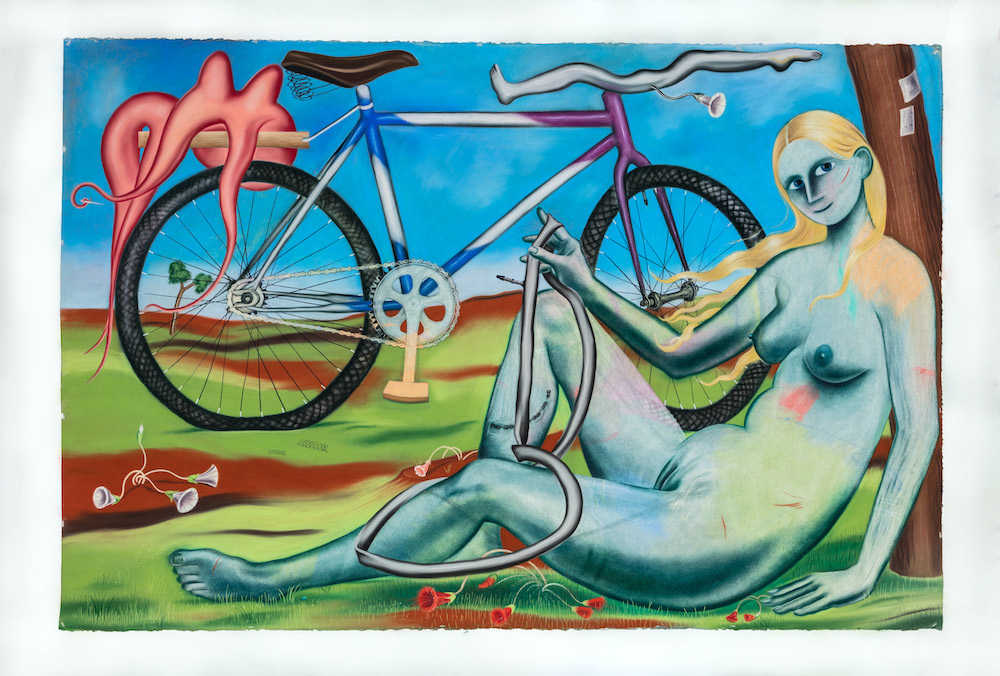 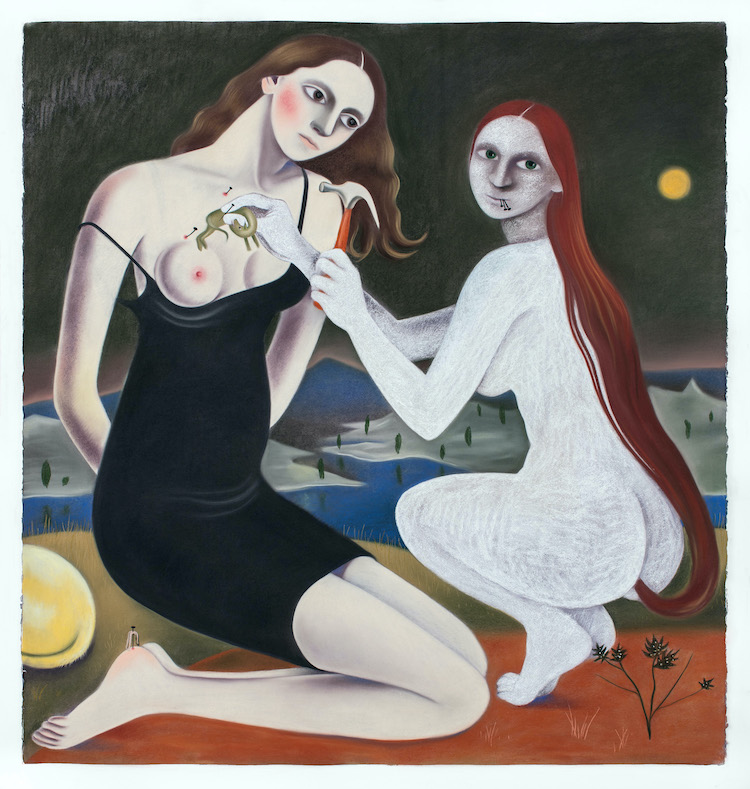 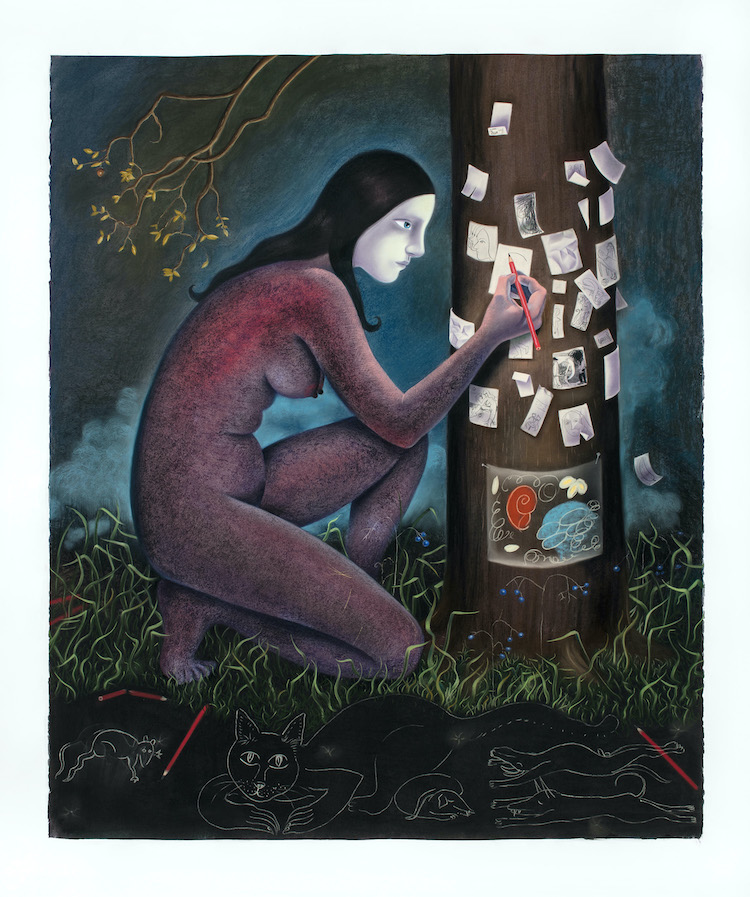 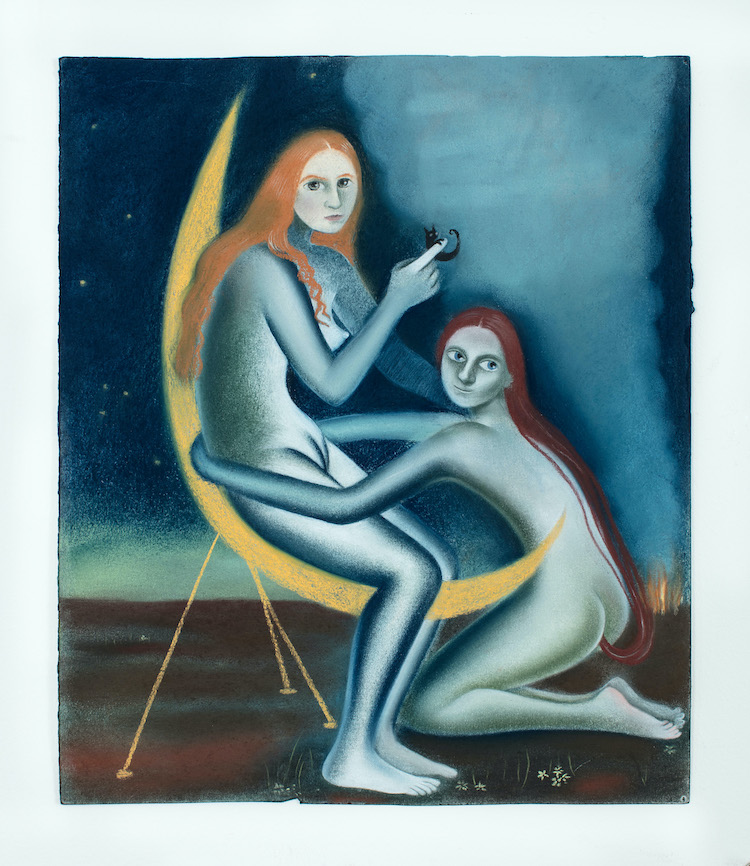 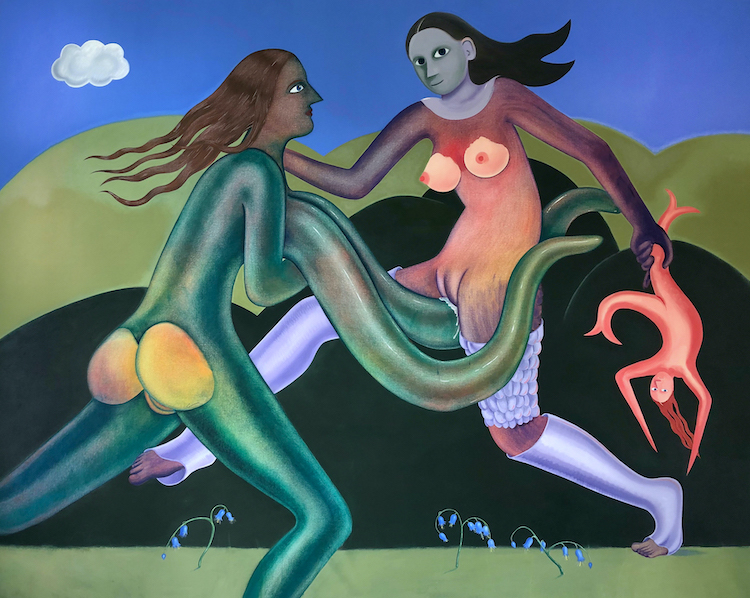 It was a bit over a year since we first introduced the works of Sara Anstis, enthralled by her trippy visuals dominated by almost exclusively nude muses. And while the exuberance of the visuals clashed with the intimate format of her pieces on paper, the artist had scaled up her work significantly for the upcoming solo presentation with Galerie Fabian Lang in Zurich.

Opening on May 7th, Pencil Of Rays brings together the largest body of work by the Swedish Canadian artist, comprising 9 pastels on paper and one oil and casein on canvas. Still building her images around the archetypal feminine subjects, Anstis is utilizing a bigger scale to create more elaborate, narrative-richer compositions. Evoking medieval art in a way the scenes are depicting depth and perspective (Silken Windhound, January, both 2020), the artist is using such an outdated approach as a stylistic choice that allows her to highlight certain allegorical details. Putting emphasis on the main figures in the front, just as early Christian art was accentuating the importance of Christ and/or other main characters, the artist is subtly subverting this tradition with her unapologetic visuals. Further heightening the feeling of godliness and timelessness, the scenes are regularly placed under a wide big sky with carefully chosen elements suggesting the presence of civilization and/or technology. It's the objects such as clothing, tools, furniture, a bicycle, that makes these long-haired muses feel more earthly, while some of their features and their behavior would suggest otherwise.

The sense of voluminosity permeates the visuals as Anstis uses fingers to rub the pigment and create smooth gradients which build the forms. This approach is especially important in the way she is rendering her protagonists' bodies as she puts a lot of accent on their physical features, often elongating their breasts, accentuating their vulvas, or allowing their hair to live a life of their own. At the same time, she is able to subtly distort certain imagery with anthropomorphic qualities. Such a delicacy of the medium also enables the artist to construct a wide range of intricate surfaces that are used for everything from different types of skin, to light and shadow play, as well as landscape elements. And while the images might feel stylized or simplified at the first glance, a close inspection reveals just how much attention to critical detail is put into these surreal pictures. Whether it's greasy chain marks on the leg (Flat Tyre, 2020) or the earplugs on the nightstand (The Reader, 2020), Anstis insists on making her muses flawed and human, while frequently attributing them with otherworldly features and abilities. If anything, their almost featureless expressions are suggesting content, yet the complexity of their surroundings, the creatures, other protagonists, and objects, indicate a highly uncertain state which can slide at any point in either direction (Dogged Moon, 2021). As is the aforementioned duality of visual elements, this cognitive tension is a strong tool for the artist to capture the interest and trigger the curiosity of the viewer. —Sasha Bogojev