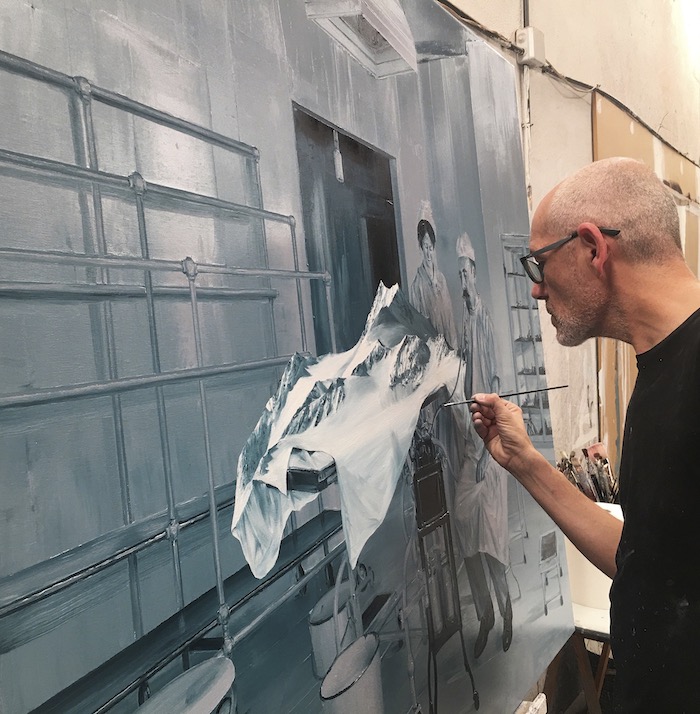 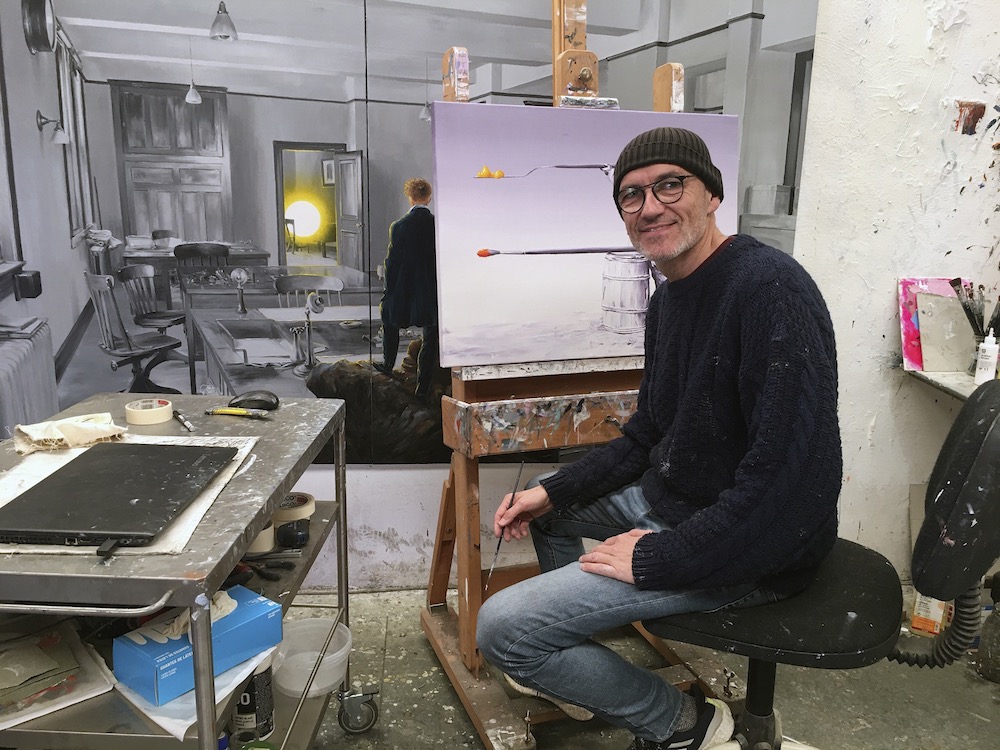 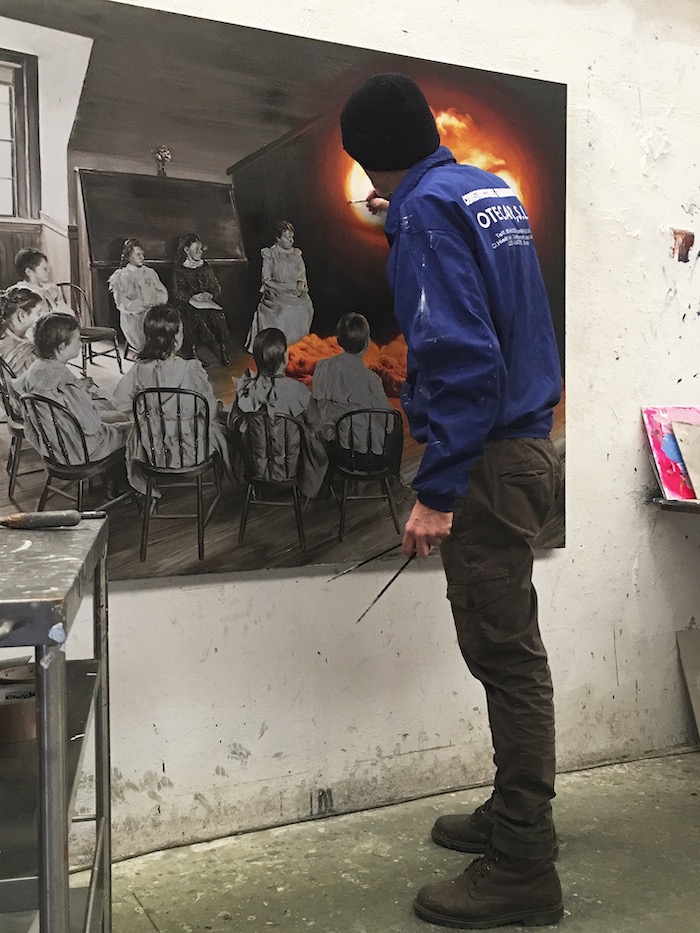 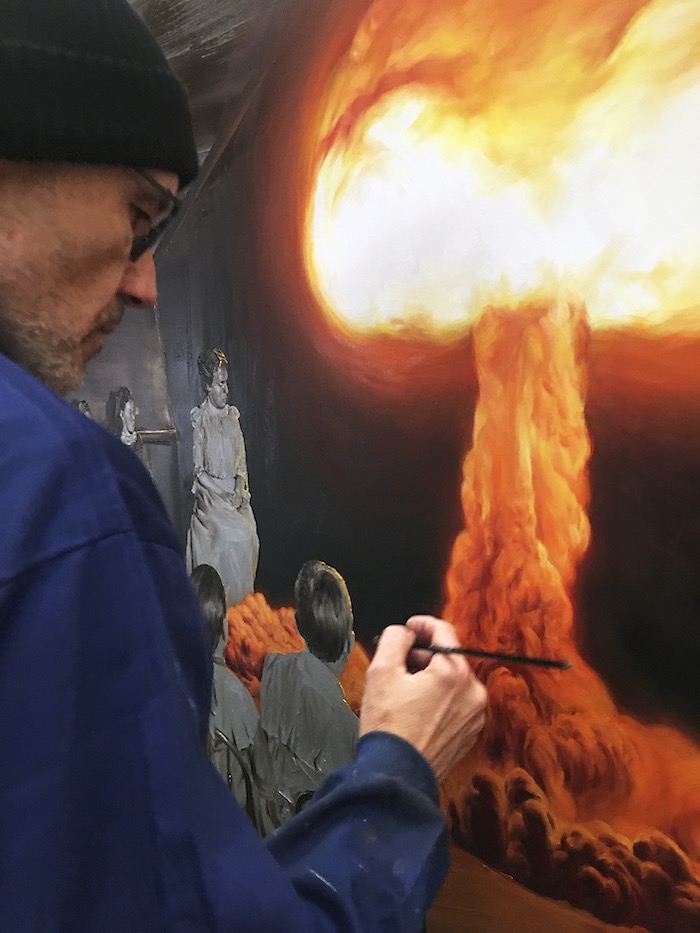 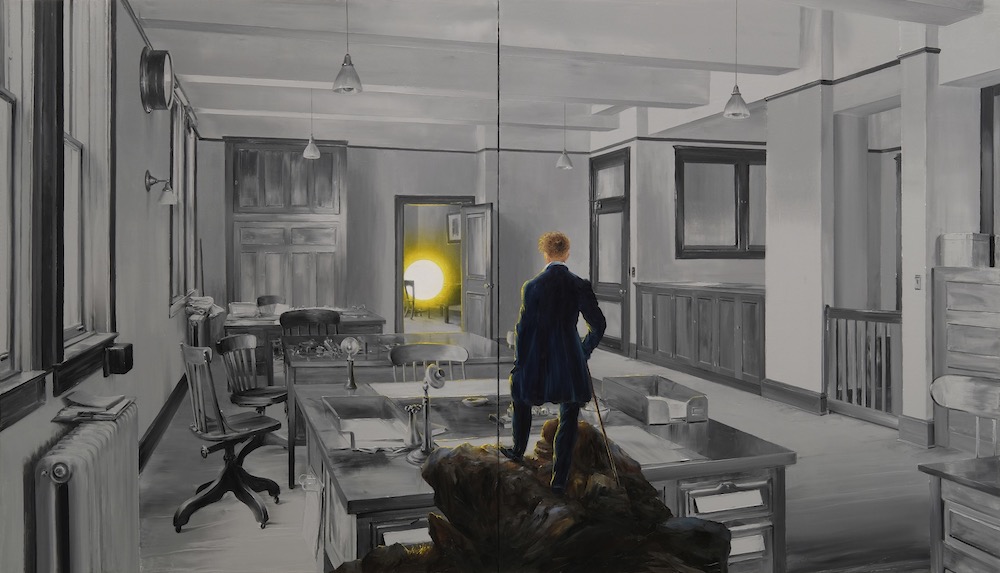 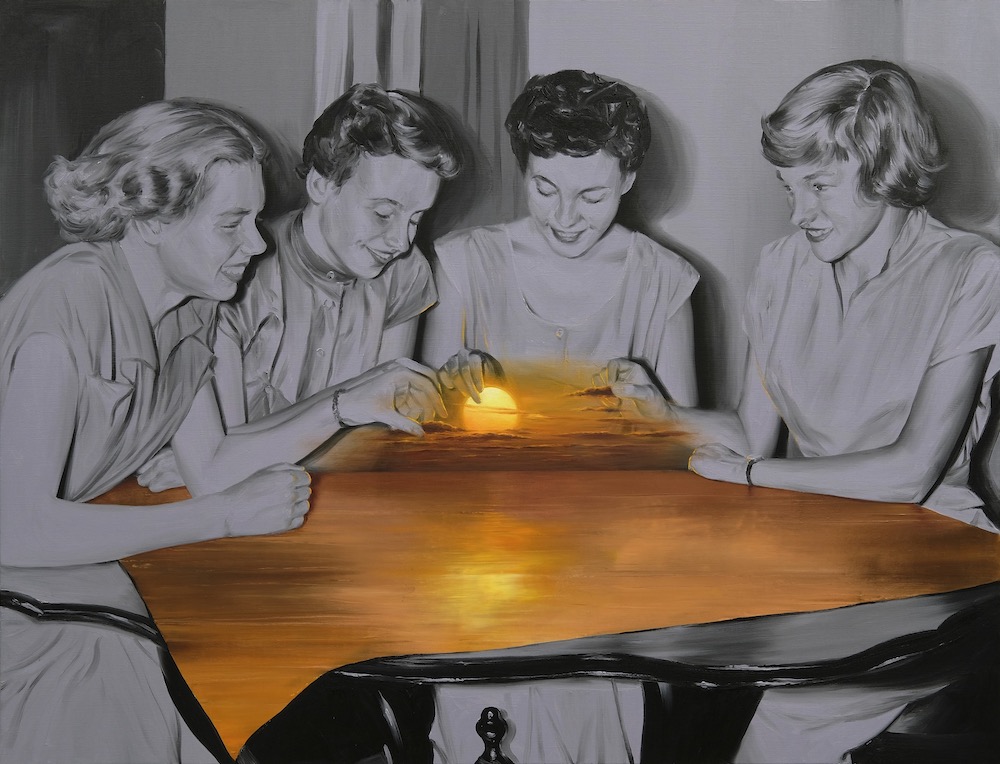 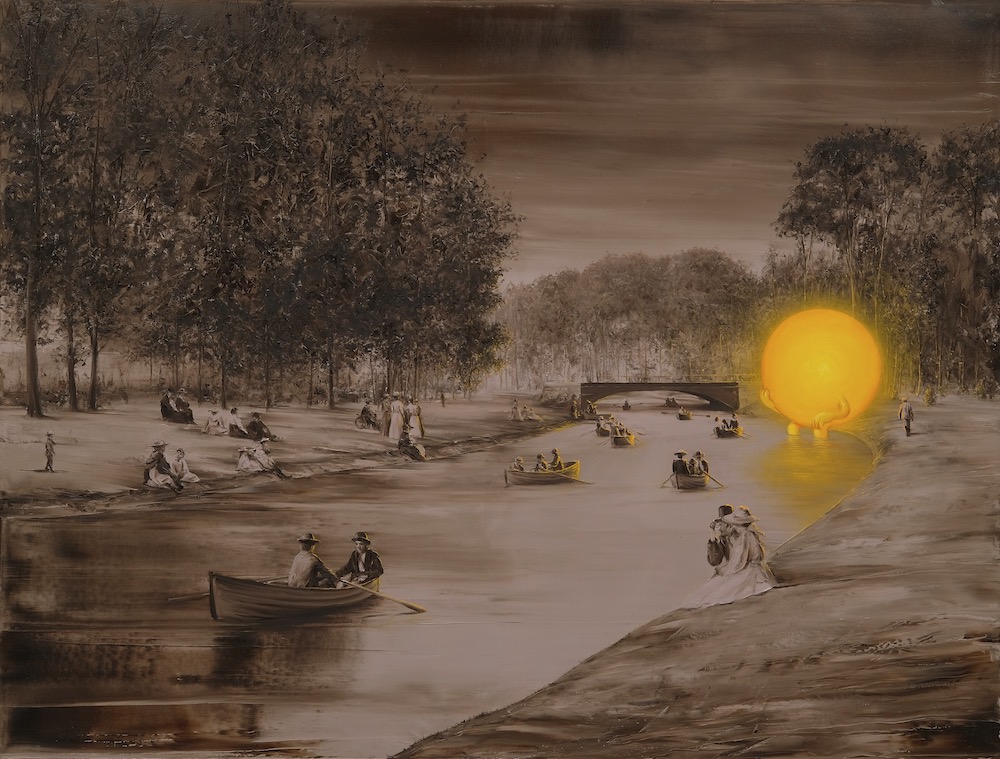 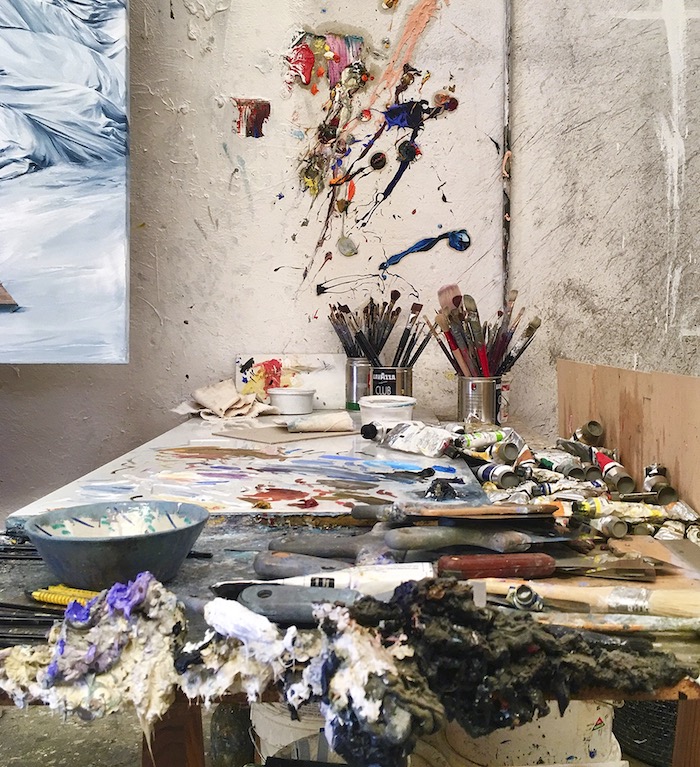 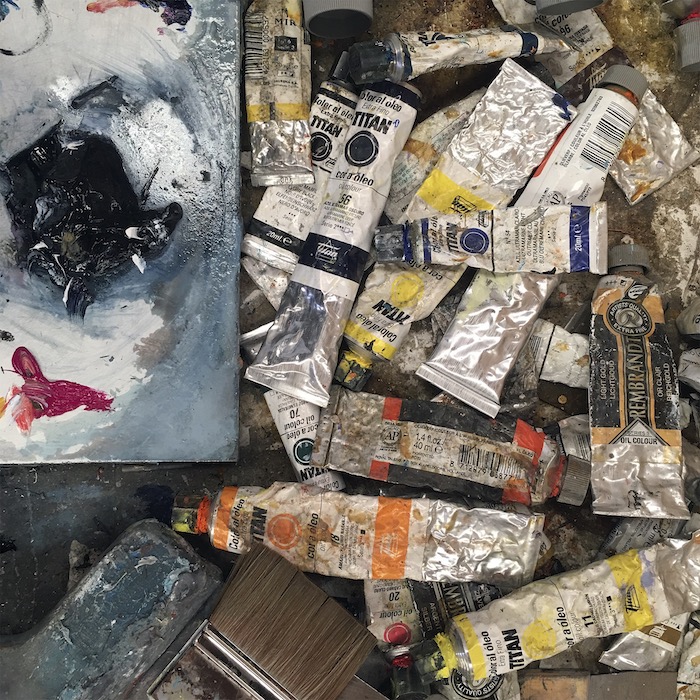 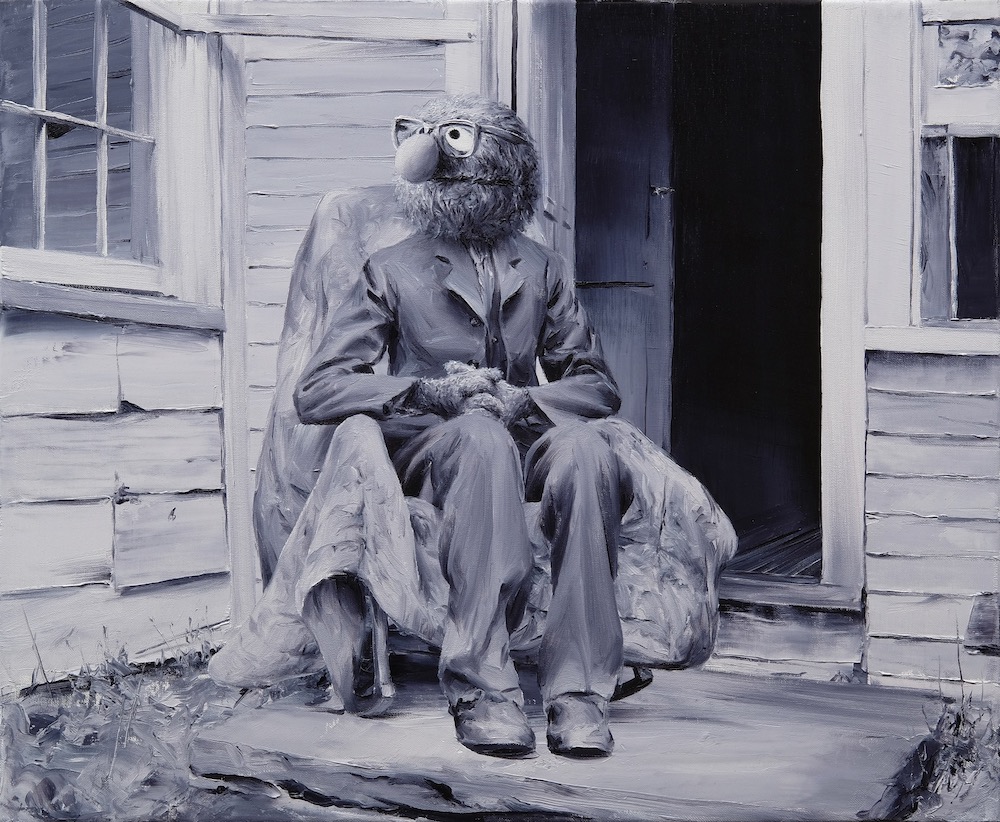 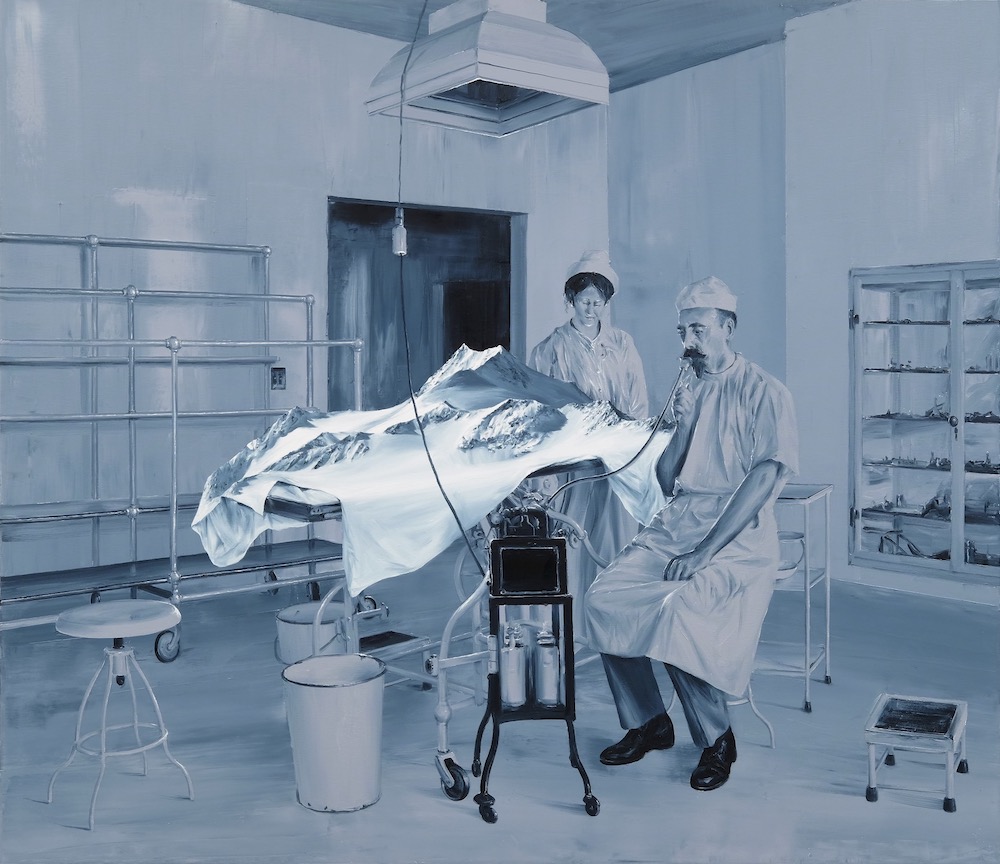 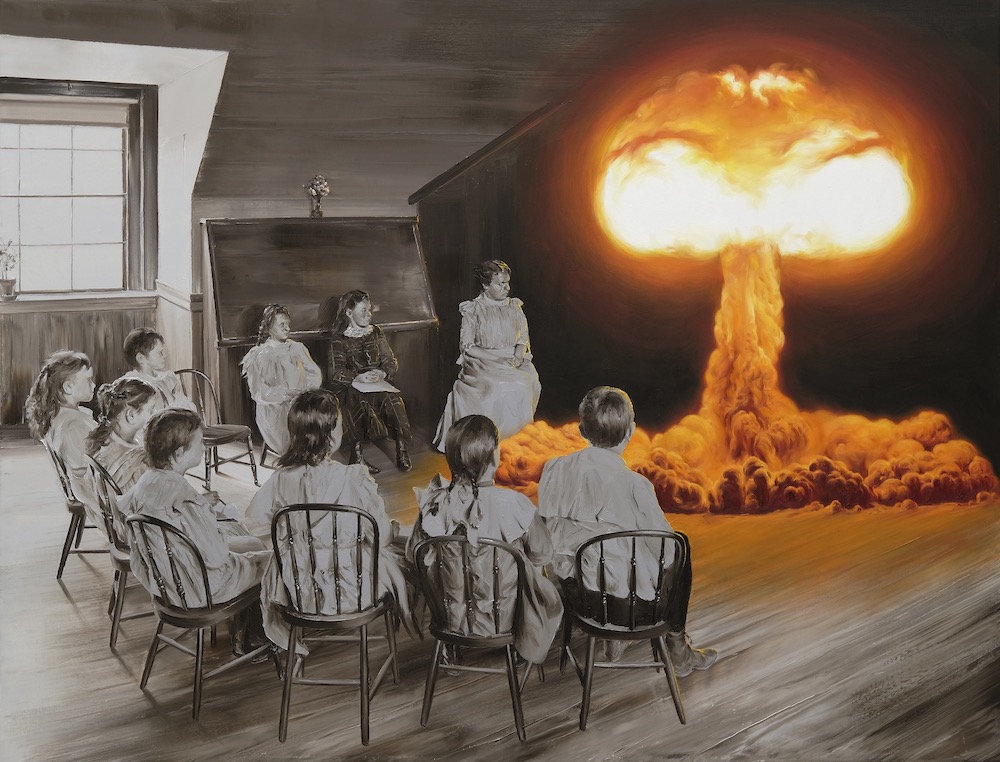 A fresh, or at least another start, a new page, a chance to try new things, or familiar ones but armed with experience, the beginnings are usually seen as an opportunity and therefore a positive predicament. Yet, the cold truth is that they are merely a logical follow-up of endings, a term with downright opposite connotations. And this interconnectivity of the beginning being a consequence of an ending, is what prompted Paco Pomet to choose such a momentous title for his 5th solo show with Richard Heller Gallery. Seduced by the idea of approaching this body of work with a vision of commencement instead of closing one, Beginnings is the artist's response to the profound awareness of finitude, limitation, uncertainty, and precariousness in times of the global pandemic.

A focus on suggesting a narrative that led towards, or will revolve from a certain scene is one of the main qualities of Pomet's unique visual language. By collaging and blending non-related imagery from different times, sources, and contexts, he is creating seemingly rational realities in which our experiences and logics are both irrelevant and crucial. An aged Grover sitting alone in Sunset Porch (2020), or Francisco Ibáñez' character Superintendente Vicente running frantically alongside a couple in Middle Age Crisis (2021) are both connecting with the viewer through their instantly recognizable appearance while pushing away any notions of logic and reasoning. Capable of capturing the attention of the viewer only to leave it stranded in an unknown environment, these nostalgic visuals are jumpstarting our imagination as we start to conceptualize possible connecting scenarios.

And these pairings are by no means accidental or superficial. Undertaking thorough research in order to source the most intriguing yet authentic reference images, Pomet's seemingly documentarian scenes are both humorous and thought-provoking, light-hearted and critical, grotesque and appealing. Undoubtedly amusing at the first glance, they abruptly instigate most unexpected relationships between historic events and actual reality, popular culture and imagination, technology and cinematography, in a way that they feel both indisputable and impossible. It's this peculiar duality that enables the artist to tackle a variety of subjects and express his opinions in a subtle, unobtrusive manner. In such regard, he is able to pay his tribute to Munch's Melancholy with Little Big Grief (2020), convey his feelings about the assimilation and the importance of Picasso's legacy into our history and culture with Classicism (2021), or hint at his opinions regarding the importance of the likes of Magritte or Warhol in Fake (2020).

Technically, the works are a blend of diverse styles used to construct believable visuals in which traditional painterly techniques are utilized in a unique, contemporary way. The masterful, confident mark making and expressive application of paint through which the almost tactile renditions are constructed are often juxtaposed with finely rendered realistic sections. Simultaneously, comic or graphic elements are applied to otherwise photographic images creating baffling pictures that both feel real and look surreal at the same time. And finally, carefully selected light or color effects are applied through the body of work, working as a leitmotif alongside Pomet's signature monochrome palette.

With the pandemic reality bringing up the issues that the artist has been interested in previously, such as finitude, the fragility of life, and the different ways of fighting against those, Pomet felt urged to face them more directly and delve further into them with the works that comprise Beginnings. Continuing onto the feeling of inertia that was imbued through his latest exhibition with the gallery, Melancholia in 2018, most of the images are suggesting surreal scenarios that the Grenada-based artist is so skilfully assembling. Using the powerful way of conveying the consciousness of the passage of time through the recurring setting/rising sun image, the artist is looking back to a tradition in painting in which motifs of nature served as a perfect scenario to illustrate ideas that dealt with intense feelings. With a show itself being rescheduled twice since April 2020, the passage of time captured in Little Big Grief (2020), Hesperides (2020), Melancholy School (2020), or An Ending (2020), earns a personal milestone significance. "Romanticism with a twist of irony is a very powerful visual engine," the artist describes his winning formula on which Beginnings is built on. —Sasha Bogojev