On January 15, 1941 French composer Olivier Messiaen premiered his seminal work “Quartet for the End of Time” within the confines of Stalag VIII-A, a Nazi prisoner-of-war camp in Silesian Germany. The ensemble (clarinet, violin, cello, and piano) played upon broken instruments in front of an audience comprised of his fellow prisoners and prison guards in the brutal cold. 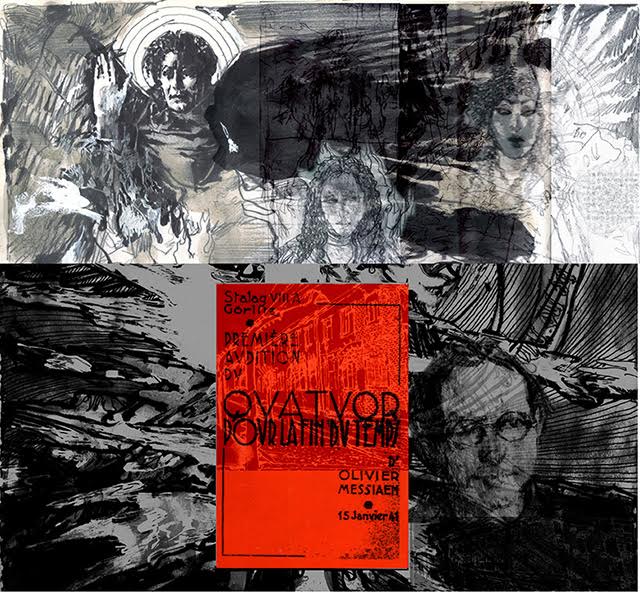 “Messiaen’s “Quartet for the End of Time” has always moved me. The composer’s concepts of musical structure have influenced my own music for many years. It was, then, a delightful surprise to hear of Freya Seeburger performing the piece and an amazing example of synchronicity to be invited to accompany the performance with my artwork. The Quartet is not just an admired masterpiece to me, it is my favorite string quartet in classical repertoire, one that consistently brings me to tears. The pure beauty and the profound contrasts, hearing the songs of birds as the composer notated them in the cold forest adjacent to a Nazi concentration camp, the crashing fury of the sixth and seventh movements and the spiritual elevation of the final violin in the eighth, ascending to an eternity beyond time...this is music for the soul, written by a daring, innovative and fearless man of genius, composed and premiered by captive musicians before an audience of prisoners. Come listen!” —Barron Storey

This presentation at Anno Domini is a small immerssive theater event building on Cellista’s work in storytelling and interweaves San Jose’s narrative into a piece, showing the immediacy of the Quartet to San Jose’s past, present and future. Performing the Quartet is the Juxtapositions Chamber Ensemble: violinist Ishtar Hernandez, cellist Freya Seeburger (Cellista), clarinetist James Pytko and pianist Naomi Stine.

An artists reception will be held First Friday February 5th 7–11pm. Barron Storey will be in attendance. Cellista and the Juxtapositions Chamber Ensemble will perform excerpts from Messiaen’s “Quartet for the End of Time.” Cellista will also present a preview of her concert monologue to be performed in conjunction her February and March concerts.