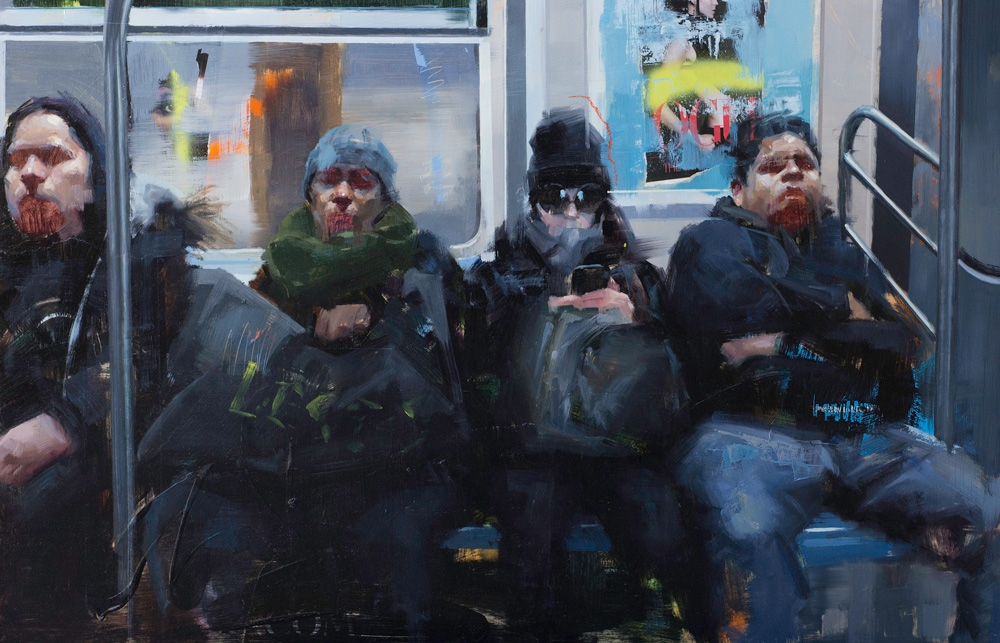 Hashimoto Contemporary is showing Navigation Unknown, a solo exhibition by John Wentz. The show will introduce a new series of mixed media paintings examining the transitory space of the urban environment. Navigation Unknown expands the artist’s ongoing exploration of portraiture through process and mark making. Wentz’s expressive style delicately balances loose and defined detail, creating human likeness within gestural abstraction. Influenced by his recent time spent in New York, the work is a direct response to the physical textures of the city. Wentz collages advertisements, spray paint and other media to construct dimensional portraits, physically unifying the paintings to their references.

Hashimoto Contemporary is showing Navigation Unknown, a solo exhibition by John Wentz. The show will introduce a new series of mixed media paintings examining the transitory space of the urban environment. Navigation Unknown expands the artist’s ongoing exploration of portraiture through process and mark making. Wentz’s expressive style delicately balances loose and defined detail, creating human likeness within gestural abstraction. Influenced by his recent time spent in New York, the work is a direct response to the physical textures of the city. Wentz collages advertisements, spray paint and other media to construct dimensional portraits, physically unifying the paintings to their references. 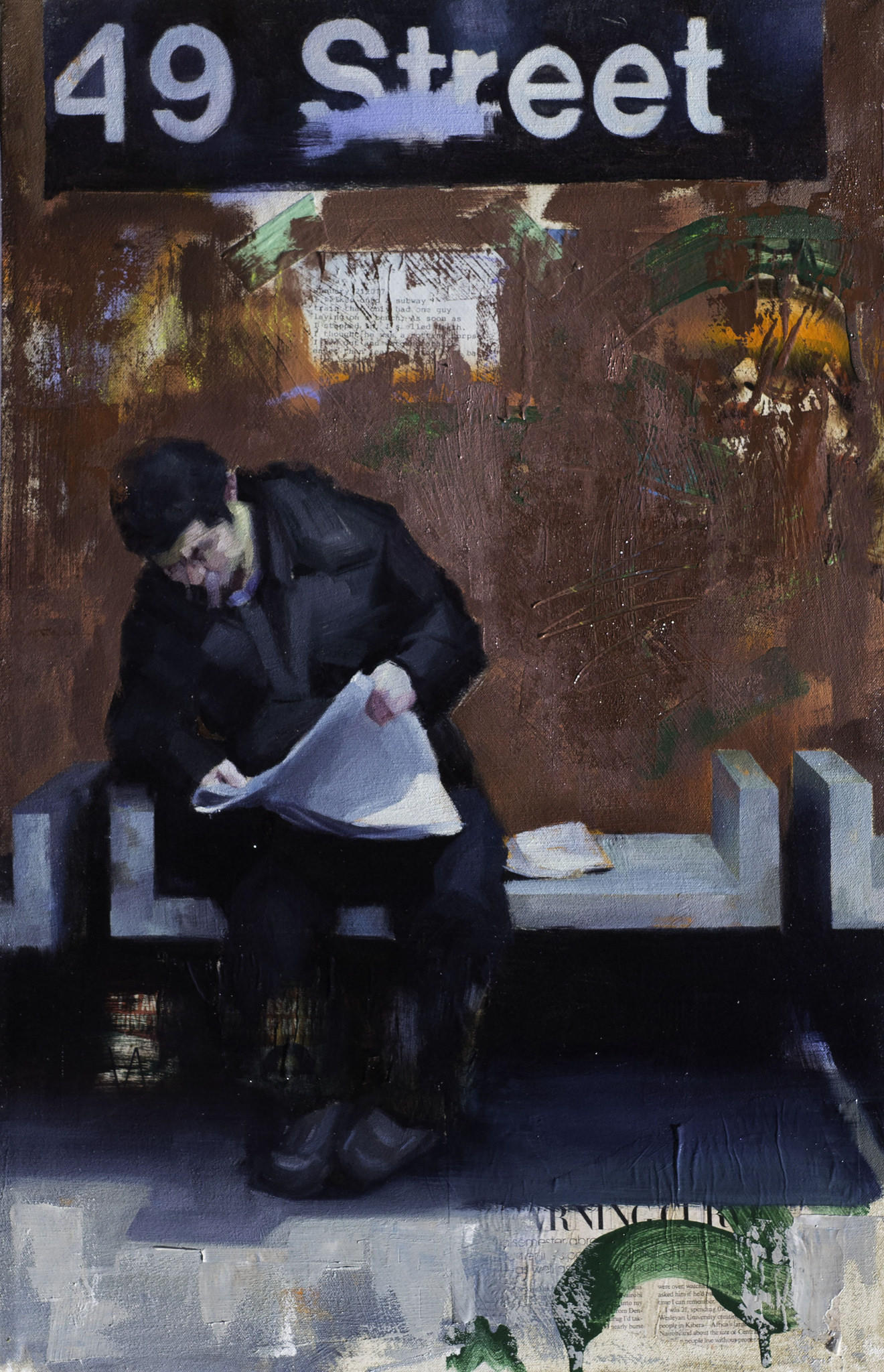 What have you been inspired by recently?
I spent 5 months in New York so that has been my inspiration as of late. I really became obsessed with the many layers along the city. My favorite were the random doorways that have layers of stickers, flyers, wheat paste, graffiti and many other things stacked upon each other. It’s almost like a time capsule. Somehow it all comes together like some sort of beautiful collage art. But I also became inspired by the people. I didn’t really paint while I was there, I was just taking photos. Every day I would wake up early and just walk and take the subway. I would do this until 1 or 2 in the morning. Sometimes later. I would people watch and take photos. I still can’t really explain it but that was really inspiring. Probably because painting can be such a lonely and monastic thing. I think it’s kind of rare that we get immersed in a place then paint it. You either go around taking photos and paint which “looks” best or you’re scouting to find a location to paint from life. I walked almost every square inch of NY. It was really freeing not thinking in terms of looking for something to paint. I think I was interested in experiences. I met strangers, snuck into abandoned subways, crashed on couches...there was no plan and no end in sight. It was all inspiring. 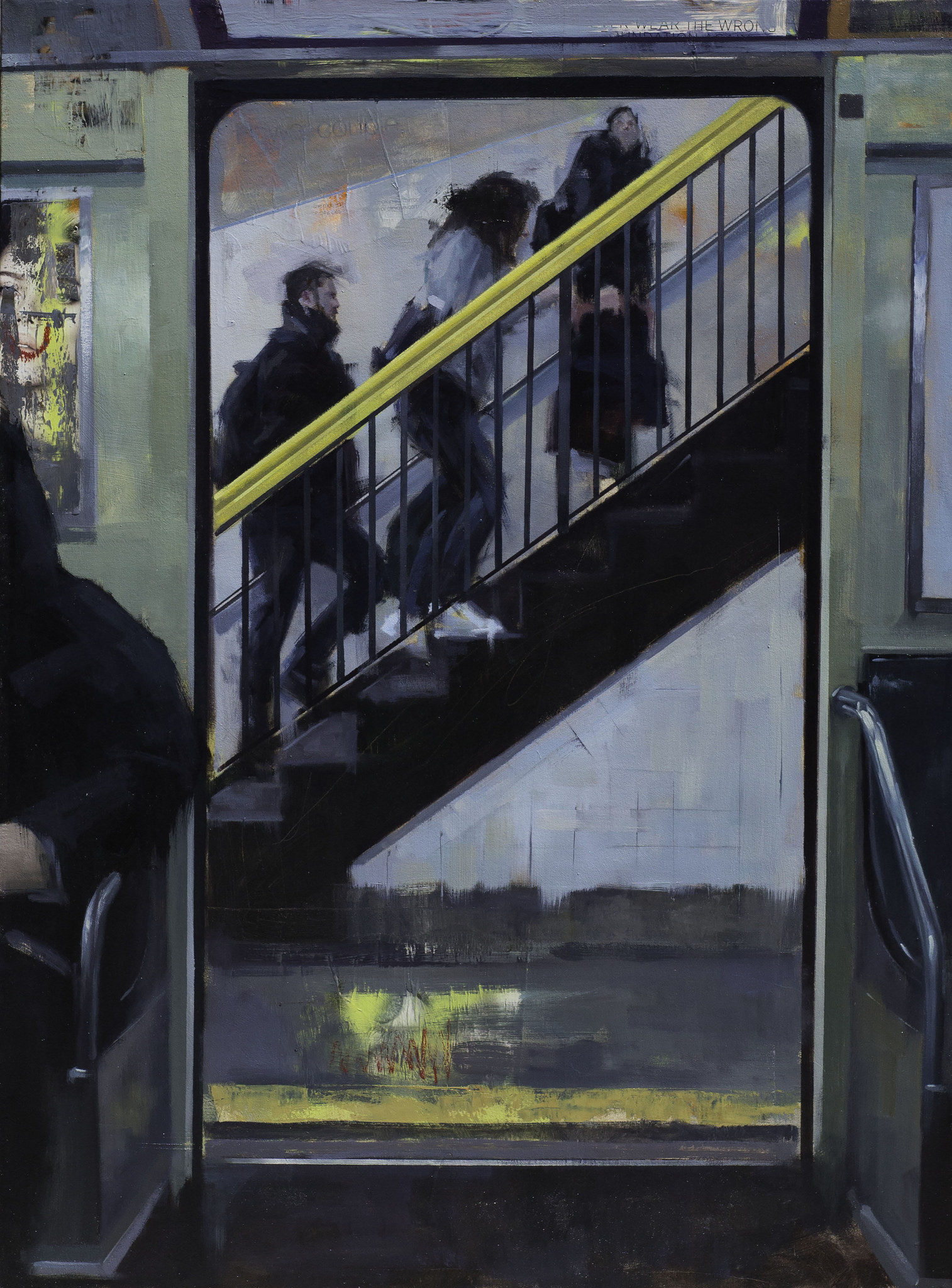 Can would walk us through your painting process? How does the work take shape from the initial idea to the finished work?
It changes a bit from each body of work but for this one it started by going through my journal/sketchbook and my photos. As I said, I didn’t really do any painting there. My sketchbook turned into a journal where I’d just catalog my thoughts and what was going on that day but I’d also collect the scraps I came across, museum tickets, Metro cards, etc. I just started collaging these things and writing. When I got back the first thing I did was go through all of my writings. Then it was a process of going through all of my photographs. I believe I had over 10,000 photos to go over. I hadn’t intended to use any of them for paintings. I really wanted them to just stand alone as photos. But as I went through everything a narrative started to develop. I realized what I was really fascinated with was transitory spaces such as the subways and subway stations. I did a lot of my writing on the subway and tons of photographing. With this body of work I really wanted to utilize the layering and collaging I had become fascinated with in NY. So, the painting starts with a basic image that I sketch onto the canvas. I then start collaging with magazine articles, ads, restaurant menus...anything. I’ll also begin layering spray paint and other mediums to add to the effect. When I’m using a photo reference, I generally have it in black and white so I’m thinking more of value and I can interpret color. Then I’ll work portions from imagination. Making up figures or other elements of the painting. It’s a lot of sitting and staring at the painting then making a few marks, checking the balance then sit and look some more. Wash, rinse, repeat. What I’m really after is energy and emotion. I try to only spend a day or two on most pieces in order to not lose those elements. 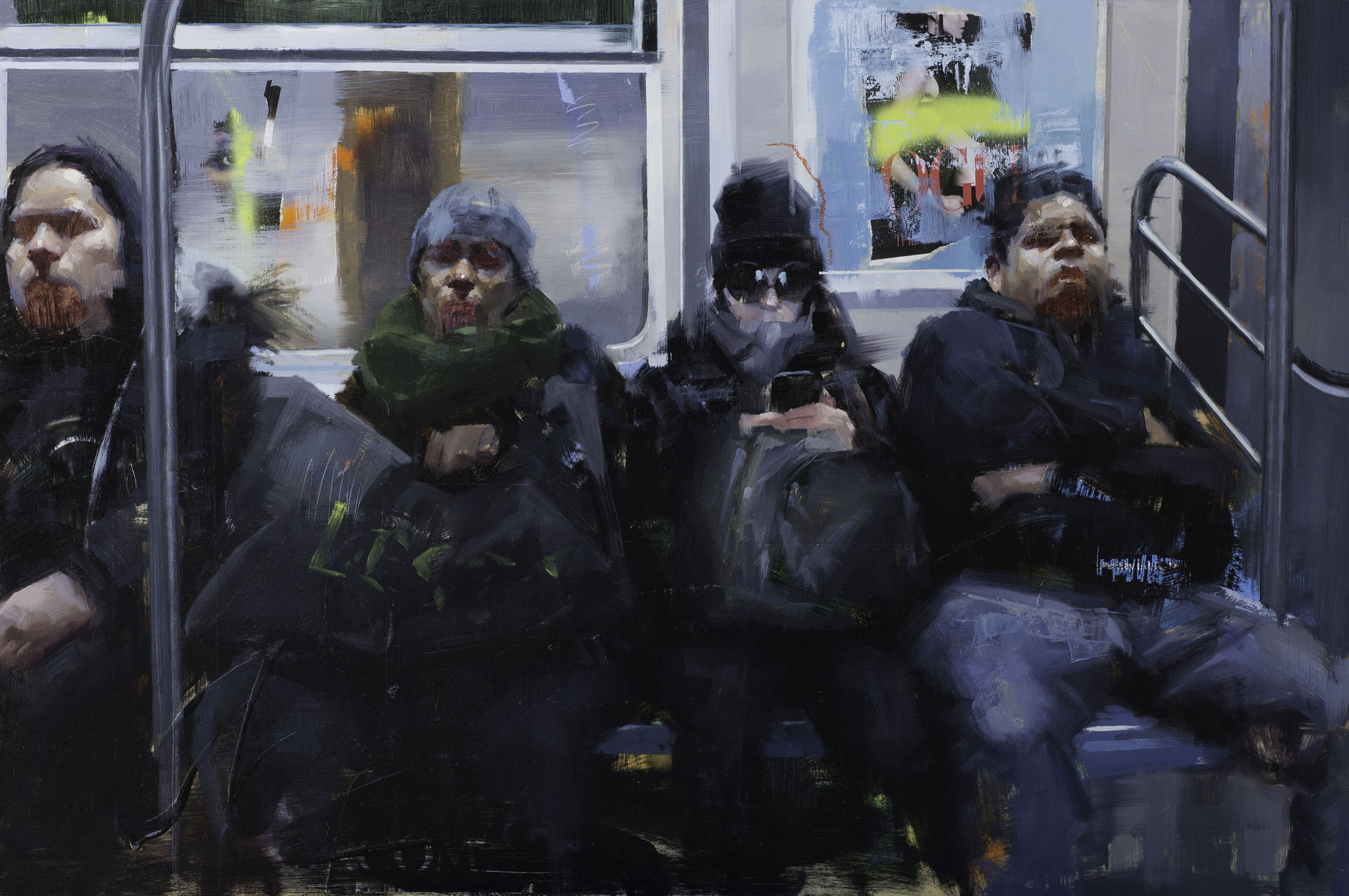 This new body of work focuses on figures in transit, particularly within urban environments. What draws you to this subject matter?
It’s really something I haven’t thought about until now. I initially decided to go with something that just fascinated me and not really knowing why. I wanted to go with my gut more than my brain. I think it’s inevitable that what you paint is somehow a reflection of yourself in that moment of time. During this period I was personally going through a lot of changes in my life and I think this served as a visual metaphor. But I was also attracted to this subject because I think it’s a really vulnerable state to be in when you’re neither here nor there so to speak. People in transit are unrooted. It’s been somewhat of a theme through a lot of my work, actually. We are in a constant flux going from point A to point B. I’m interested in the area between those two points. Maybe it’s a yearning to be in the moment. In the now. With this series in particular, I also found it fascinating that in these particular spaces such as the subway we are not in our own comfort zones. A person most likely just left a space of comfort such as there home and are going to another such as there job. But in between, we have to congregate in this temporal shared space. Everybody is vulnerable. What’s really fascinating tho is every now and again you’ll have an unfortunate person, maybe a homeless person, who is in this space and quite comfortable. The entire city is here home. Yet, they’re the ones that are ostracized in this space. They are the only ones comfortable yet made to feel uncomfortable.

Your practice has recently expanded into street photography. How do you see these varying mediums interacting?
That’s something I’m still exploring. As painters, photos generally just work as references or springboards for paintings. I really wanted to integrate the two because they have such a wonderful juxtaposition in both their similarities and differences. I first tried integrating the two by collaging my own images in the paintings. They are mostly painted over with just bits showing, but they are in there. I’ve also been exploring with painting on my photographs which is fascinating because it can complete change the narrative. I have other ideas I want to explore in the following months. 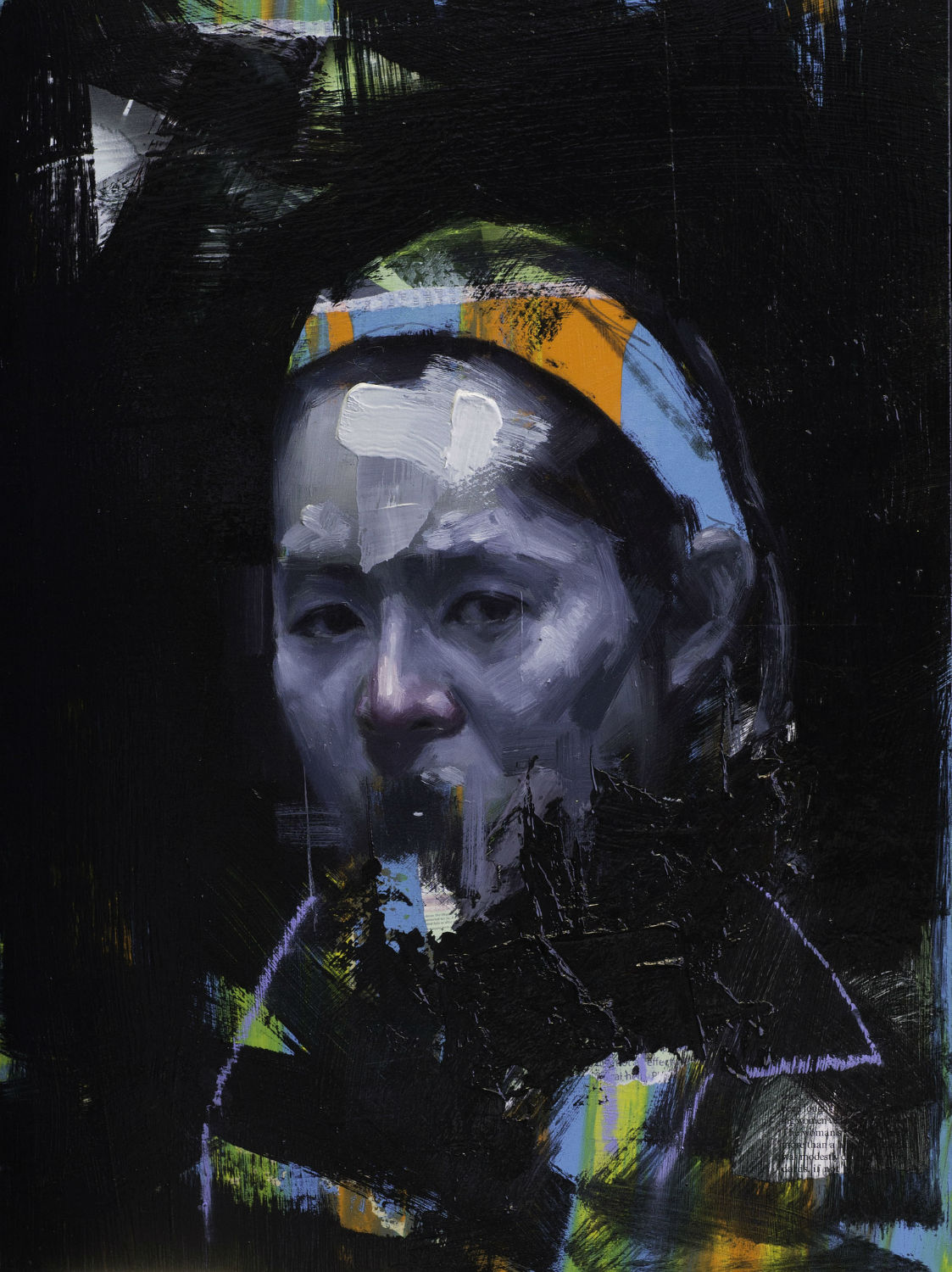 How do you see your work in relation to contemporary painting? Who are the artists working today that you see your work in relation to, or influenced by?
I’m not really sure because I don’t know if I understand what contemporary painting is anymore. Things change so quickly and the impact of social media seems to have blurred a lot of boundaries. I don’t know what artists working today I see my work in relation to but I have been very influenced by Gerhard Richter, Kerry James Marshall and Bast. The influence is not on the surface though. My work looks nothing like there’s nor do I see myself anywhere near them. I’m influenced by their creativity and urgency to explore their mediums. While in NYC I was able to see the Kerry James Marshall retrospective and Bast’s solo show at Allouche Gallery. Their creativity, ability to weave in and out of various mediums and energy and emotion in their work is something that inspires me to no end. 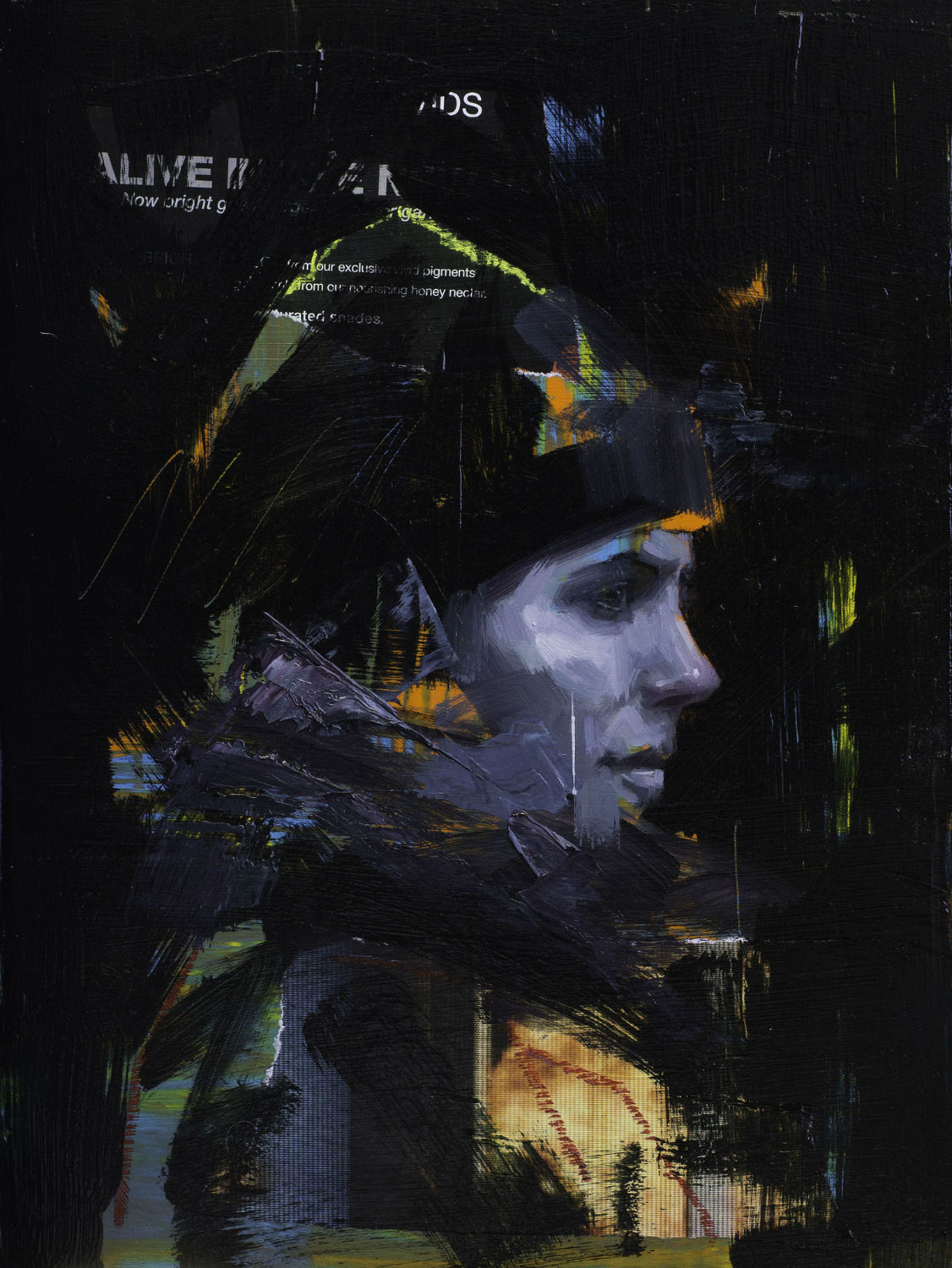 What can we expect from your upcoming solo exhibition “Navigation Unknown”?
It’s going to be a really different show for me compared to my last. In exploring people in these transitory spaces, I focused on two aspects; the macro and the micro. About half the show is mixed media paintings exploring people in groups while the other half are portraits of passengers. The former has a very different language than the latter. They are in context and recognizable spaces, which creates an interesting dialogue and set of emotions. The portraits are all on black background, void of context, color and even titles. I wanted to remove as many things as possible which could be read into. I wanted to bring it into a raw state and also use it as a visual metaphor that you have absolutely no information about this person aside from they’re facial features. That’s the feeling I would get riding the subways for hours. You view everyone as a group, just people watching. And sometimes you focus on a particular person. You know nothing about them but they can be fascinating for one reason or another. Some people just mutter to themselves, some are reading bibles, others just read their phone and others will stare directly at you in a menacing way. I really wanted to communicate this with this body of work. 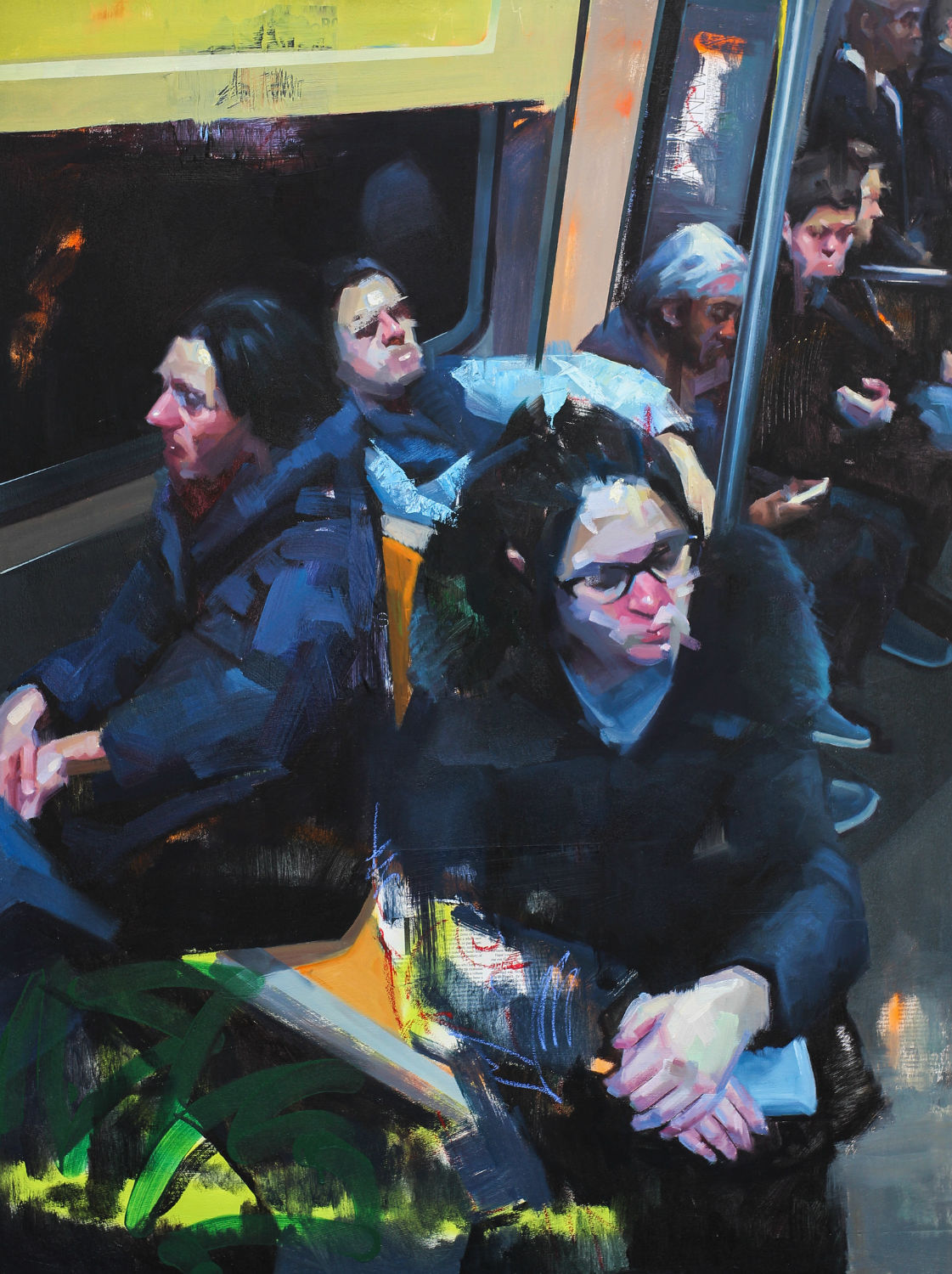 Where do you see your work heading in the future? Do you have any specific projects you’ve been wanting to pursue?
I’m definitely moving more towards mixed media and there will be more integration of photography one way or another. I really would like to travel more and integrate that into each body of work. As far as specific projects, I’d love to explore and show more photography. Perhaps put out a book or something.