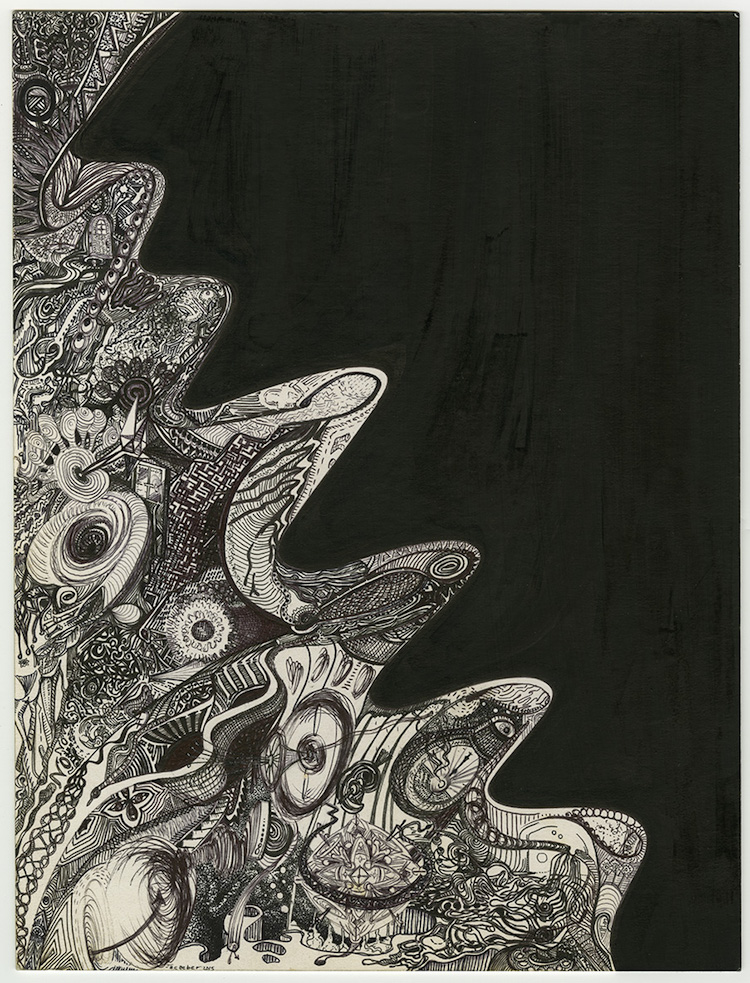 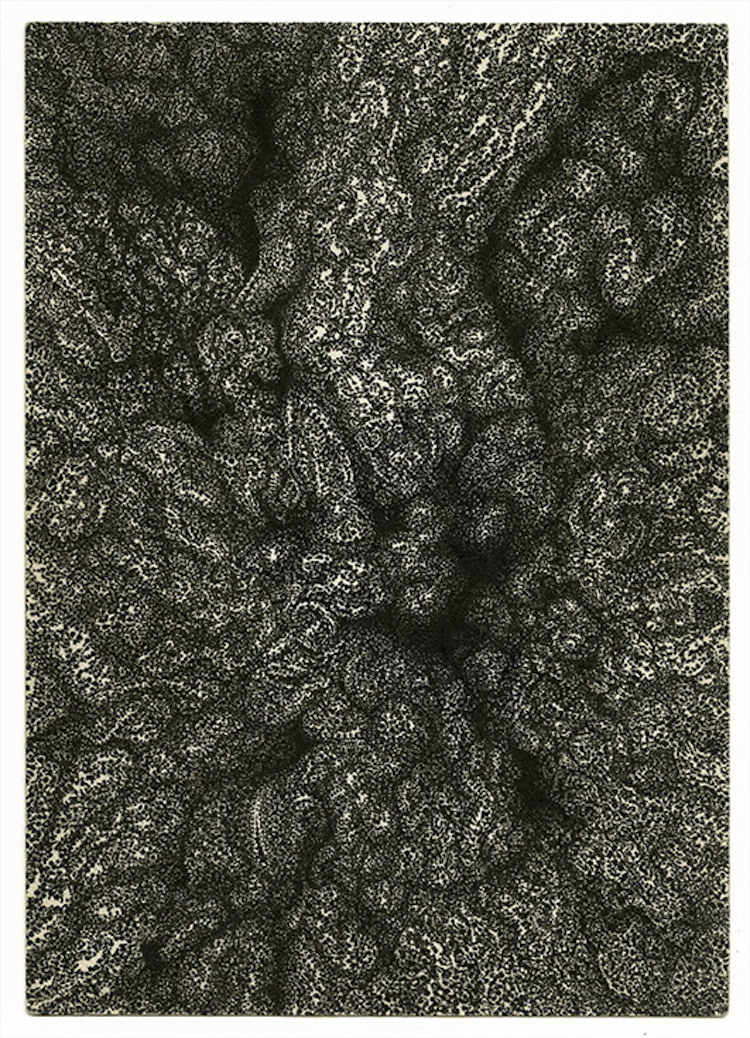 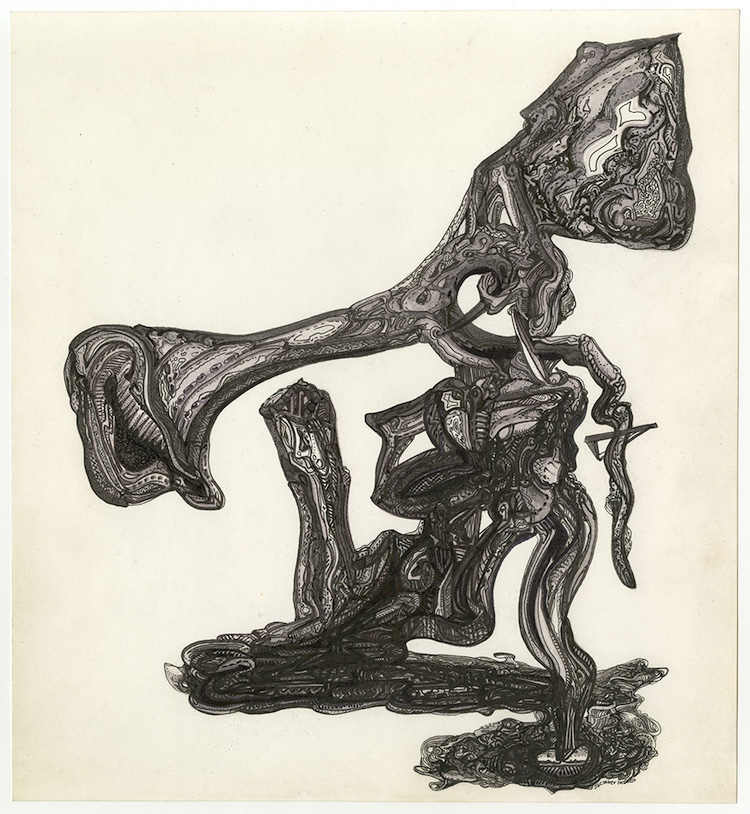 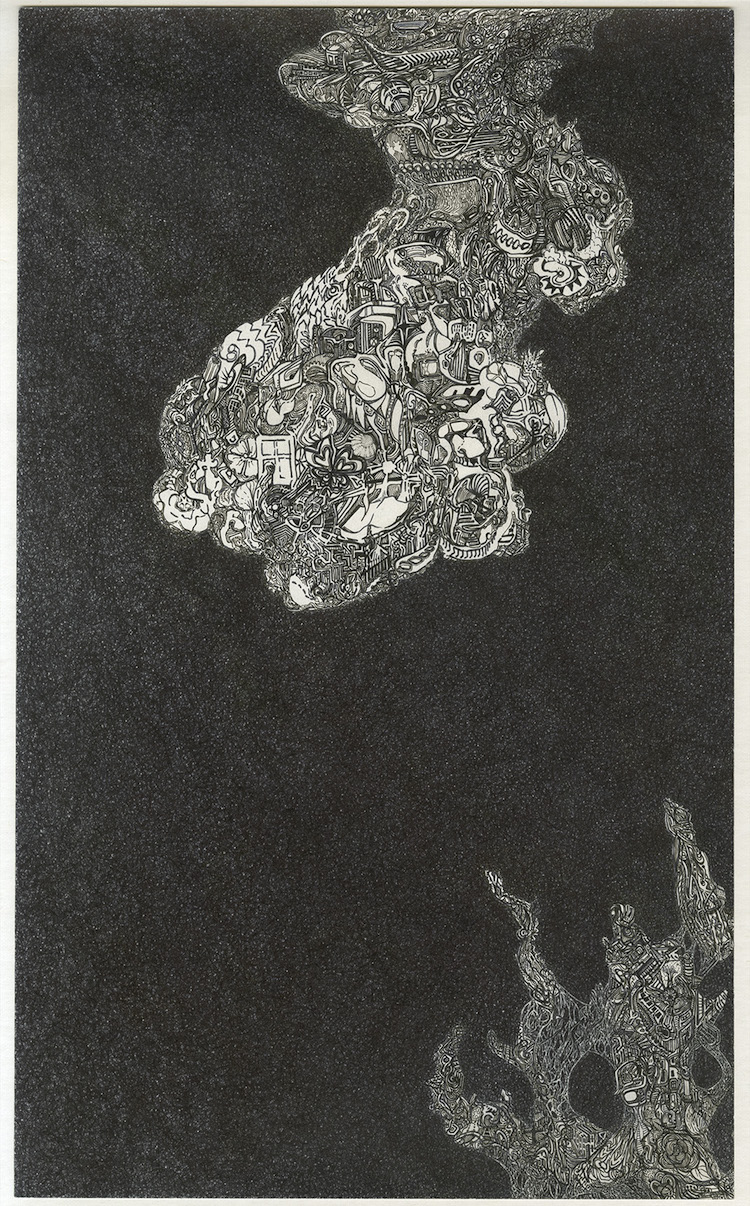 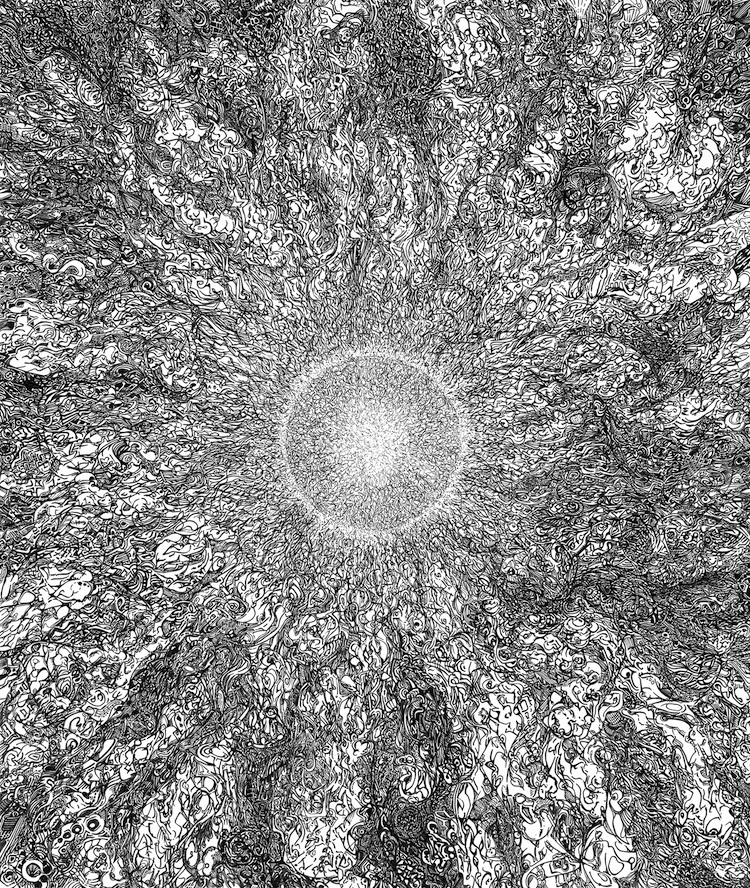 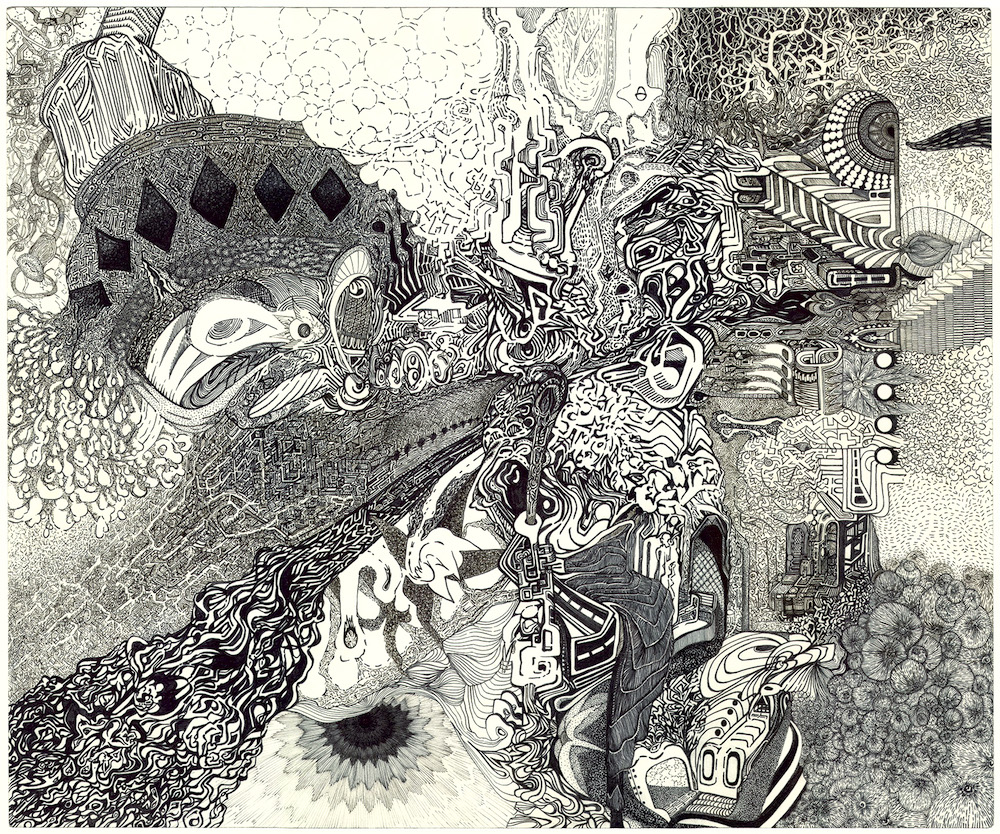 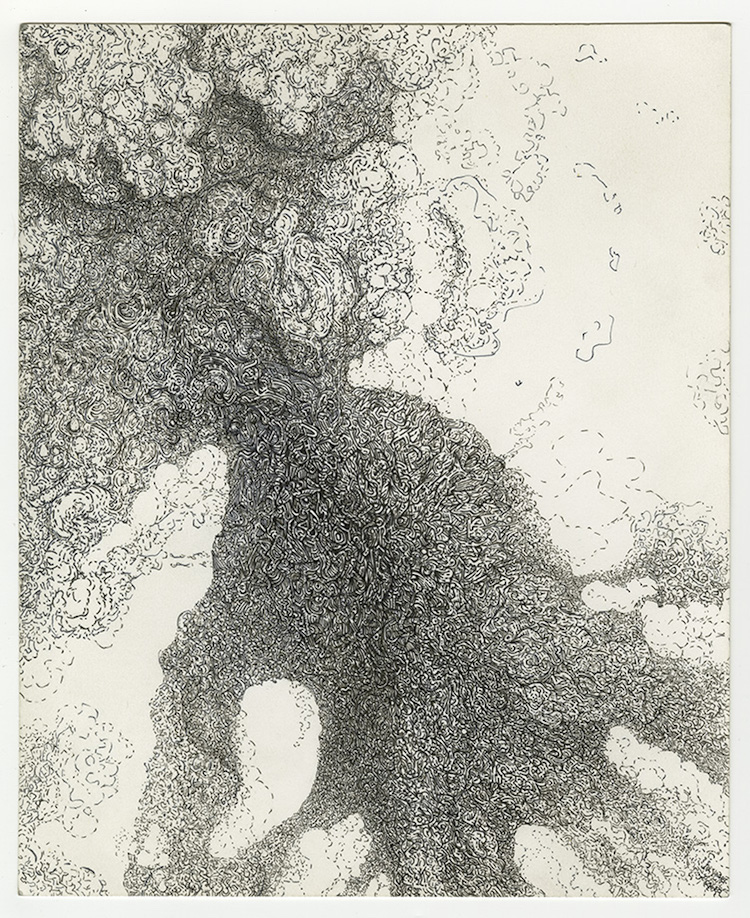 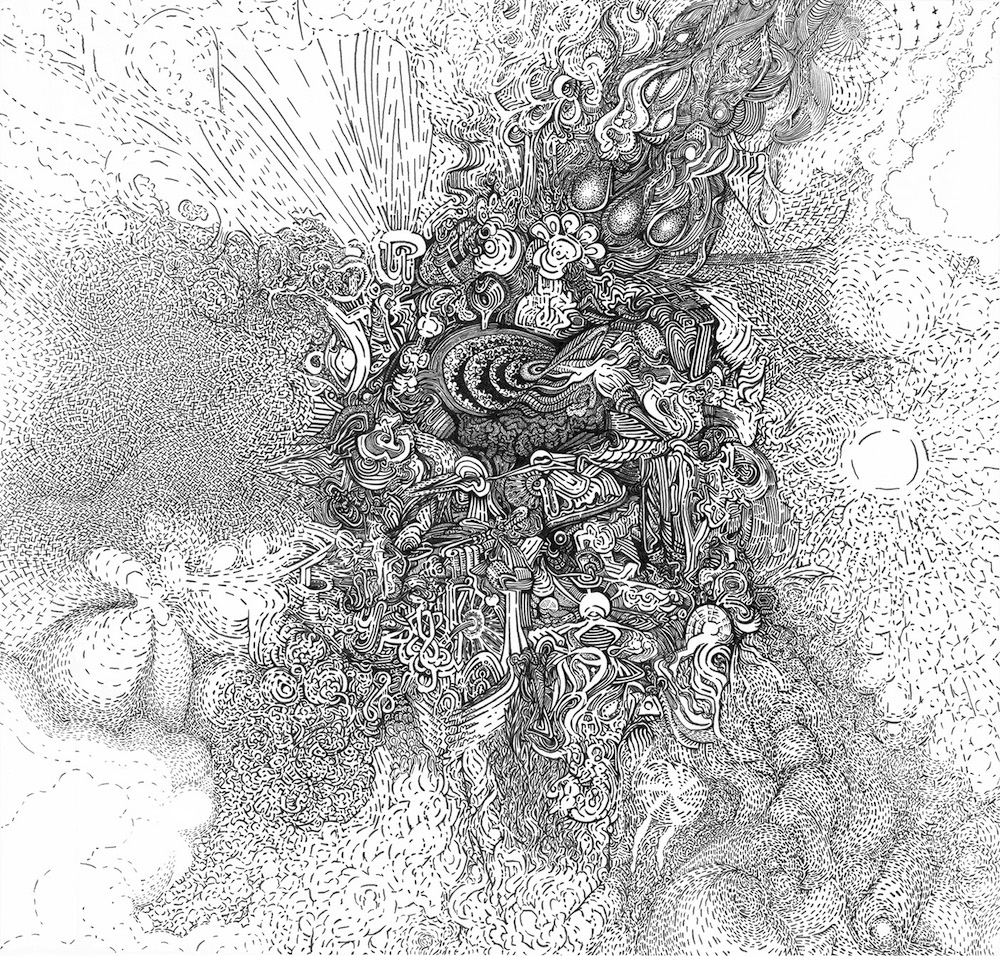 In turns perplexing, disorienting, wondrous and utterly beguiling, Jacaeber Kastor's drawings make you look and look again, trying to find your way in their miasmic magic until, at last, you discover that special pleasure of being truly lost. And when you think you're done decoding the esoteric and abstract, conjured all the forms and meanings from these oceans of latency, answered the call of otherness as if it were the sphinx's riddle, turn the work or flip your head, around and around, because there is no single perspective to read Kastor's psychedelic topography. It's an entwined, constantly unfolding omniverse with no right side up or upside down.

If, in the course of your wanderings through Kastor's meandering poetics of line and space, you come across the unexpected or the impossibly alien–for indeed you surely will, quite possibly all at once with overwhelming simultaneity–and you wonder how you even got there, you might also ask how indeed did this artist land at just such a place himself. Make no mistake, Jacaeber Kastor is an intrepid voyager of body and mind, an adventurer without destination or exit strategy, a man who has somehow been there before he understands it as different. Everything is nuanced with the subtle shifts of imperceptible change, and actuality just beyond the tiny grasp of appearance, reason or replication. His art, like the convolutions of a restless mind guiding the inspired hand of uncertainty, is the tracings of a mind-traveler, a map to the nowhere that is everywhere, so personally idiosyncratic that it shares commonality where likeness meets in a zone of compatible dissimilarity. 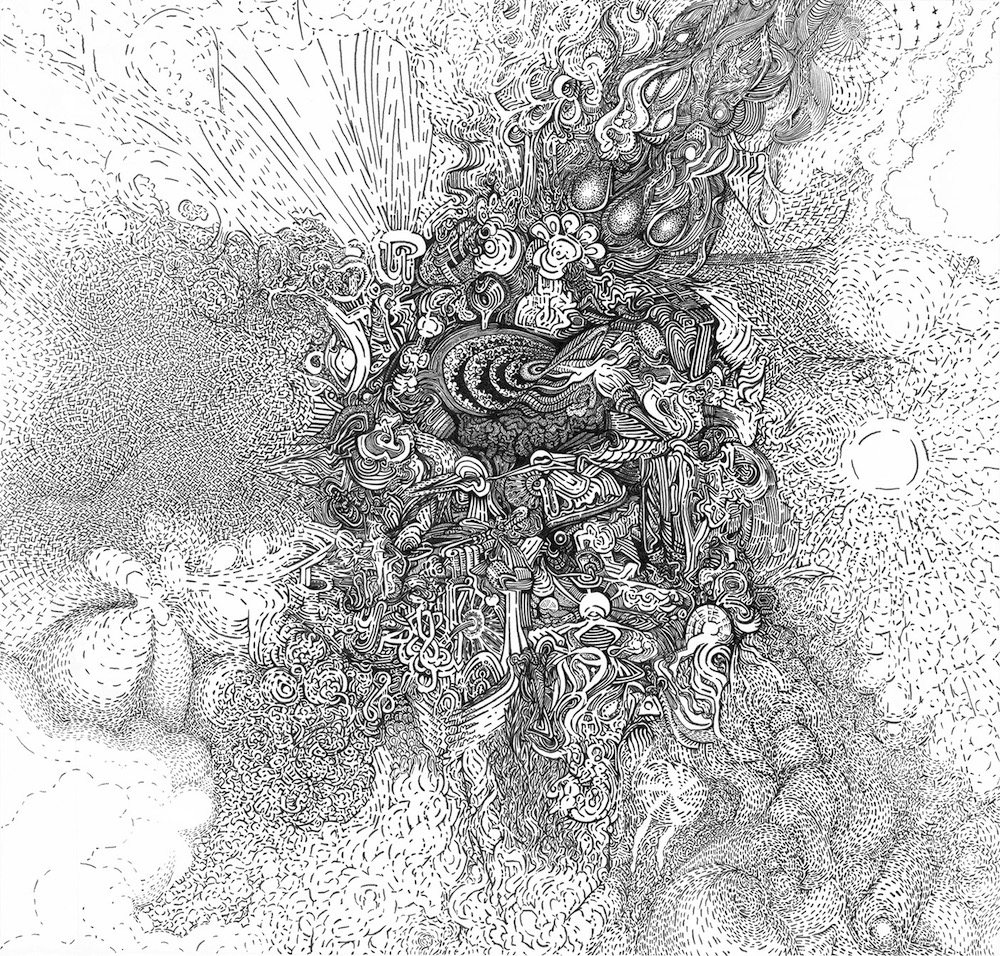 Kastor grew up in Berkeley in the Sixties, son of an artist and art teacher from the abstract expressionist tradition whose legacy might be considered in Kastor's penchant for dissolving figuration into swirling abstractions, his emerging vision further benefiting from exposure to the ideas and sensibilities of the surrounding counterculture and drug culture. Add years as a competitive skier in Squaw Valley, various physical labor jobs on both coasts including construction, house painting, plumbing and working in a shipyard, a stint studying at the venerable San Francisco Art Institute and a number of years practicing Buddhism and meditation at a Zen center, and you have the fecund flowering of this artist’s fertile growth. All this life experience is almost secondary to the informal but deep artistic training Kastor got when necessity of supporting his art with a day job, a certainty because the process was slow and laborious and the work deemed not commercial led him to open a gallery.

Jacaeber Kastor opened the aptly named Psychedelic Solution on a busy thoroughfare of New York City's fabled West Village in 1986, and over the next decade curated a stunning game-changing series of shows featuring some of the most important visionary and psychedelic artists, including H. R. Giger, Rick Griffin, Robert Williams, Lee Conklin, Robert Crumb, Joe Coleman, Wes Wilson, Alex Grey, Vaughn and Mark Bode, Victor Moscoso, Mark Mothersbaugh, Alton Kelley, Paul Mavrides, Stanley Mouse, Spain Rodriguez, Gilbert Shelton, John Van Hamersveld, S. Clay Wilson, Jonathan Shaw, and Pushead to name but a few. Though many were already legendary in the underground for their work in posters and album cover art, comics, tattoos, surfing and custom car culture, for most it was among their very first exhibitions in a gallery context. For these important West Coast artists in his roster, Kastor's introduced to the New York art world and media, exposed them to artists, collectors, critics and curators that would help establish these renegade voices to the fine art establishment. Beyond its capacity for sustaining many significant artists at a point in their career when widespread popular interest in them had waned, Psychedelic Solution became a vast horizon for generations of visual outlaws. 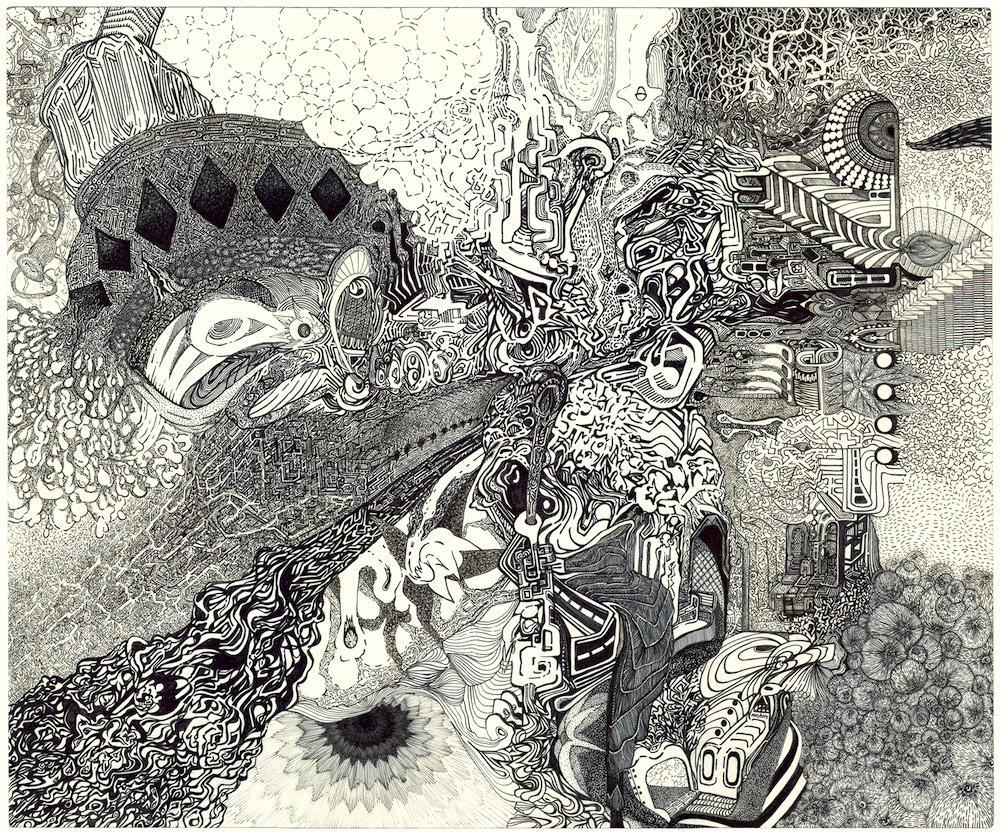 For all that Psychedelic Solution offered so many artists, and for all it did for a myriad of like-minded heads who appreciate this work despite–or because of–resistance to authoritative ratification as fine art, it perhaps quite incidentally did even more for Jacaeber Kastor as an artist. At the time, this was far from apparent. The little loft built as a drawing studio perched atop his gallery grew gradually became abandoned as the demands of running such an enterprise slowly consumed all his waking hours. Over the last few years of the gallery it lay fallow, constituting one of the more extended “fruitful gaps” as he refers to them, periods in which he was not so much practicing his craft as learning by exposure and osmosis. Having sold off his modest business empire in 2004, and being what might politely be called a retired gentleman of leisure, enjoying time spent drawing entirely without consideration of audience or sales, we see now, a decade and a half later, the fruits of his gap. Here, stripping away the graphic emphasis of his former masters who worked largely in popular commercial media, and delving into the nuanced line-work that made their art so inherently trippy, Kastor articulates those inchoate spaces where what is knowable ebbs into the dreamscapes of unfettered imagination. The effect is mesmerizing, as if the entire history of psychedelic aesthetics were poured into a juicer, producing a distillate of many minds and countless hands working as none, an amalgam that is perfectly pure. –Carlo McCormick