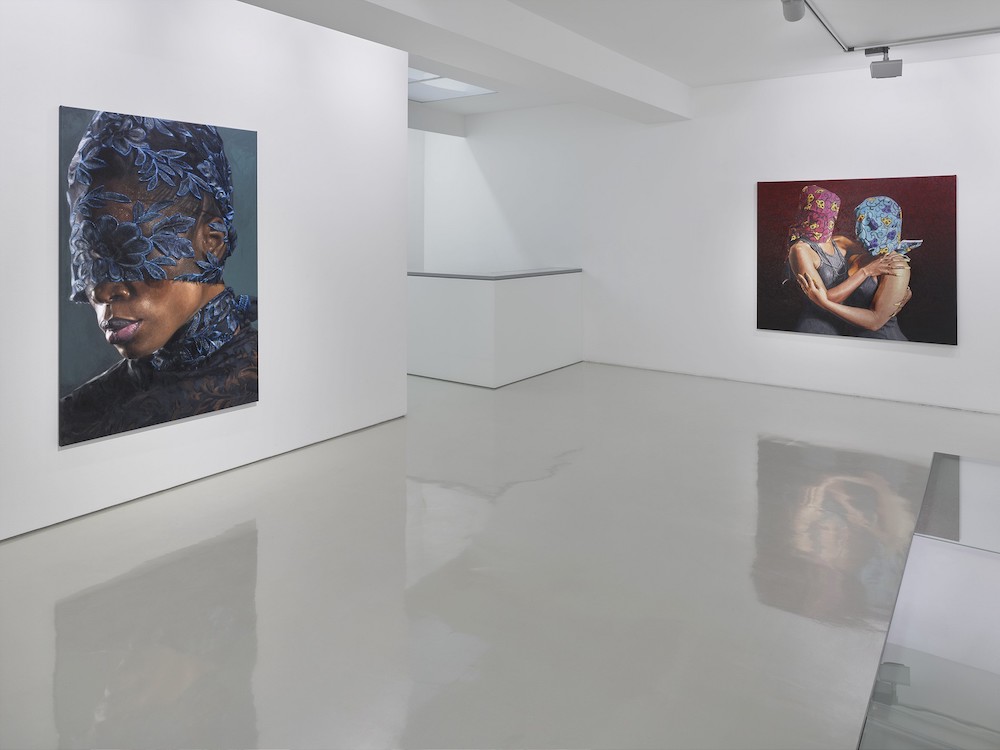 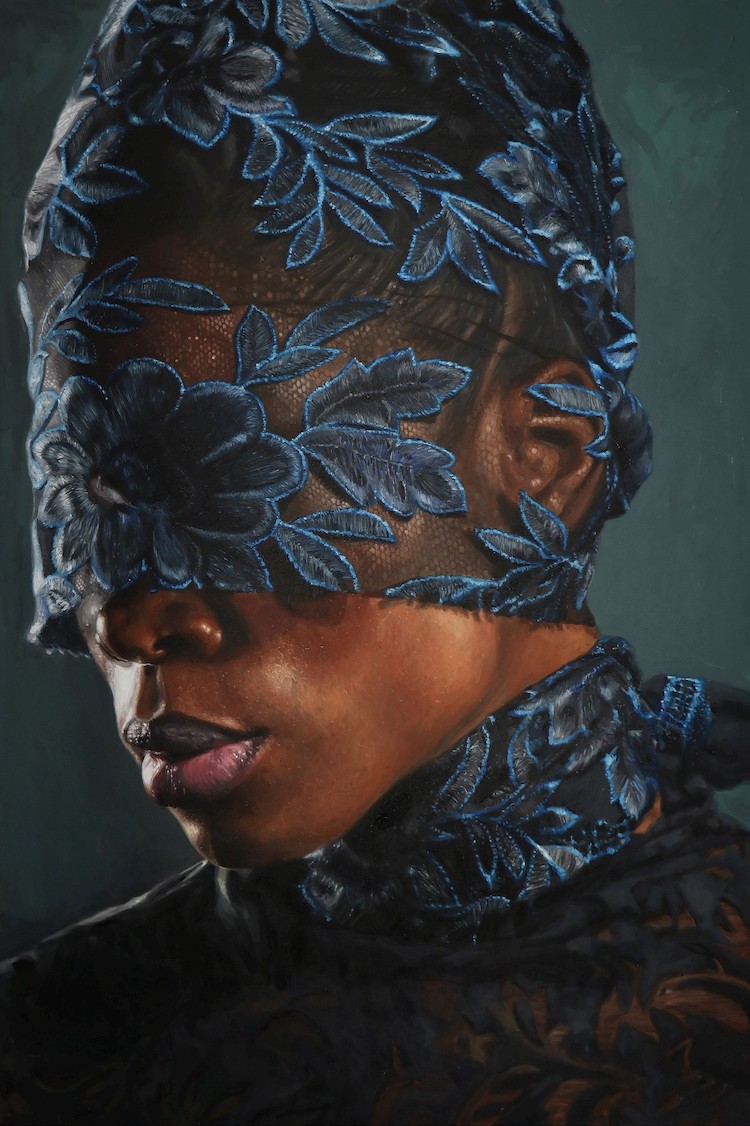 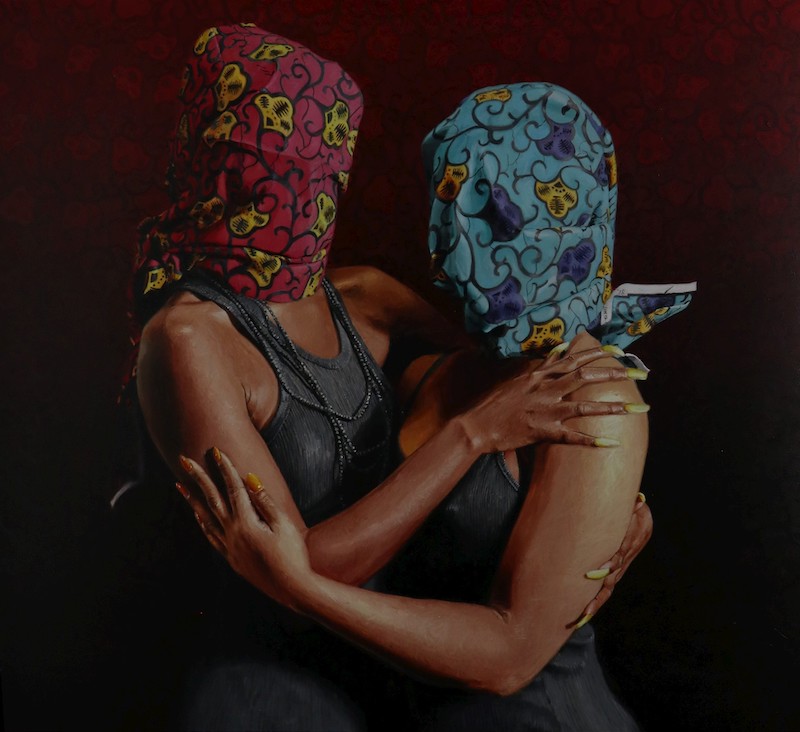 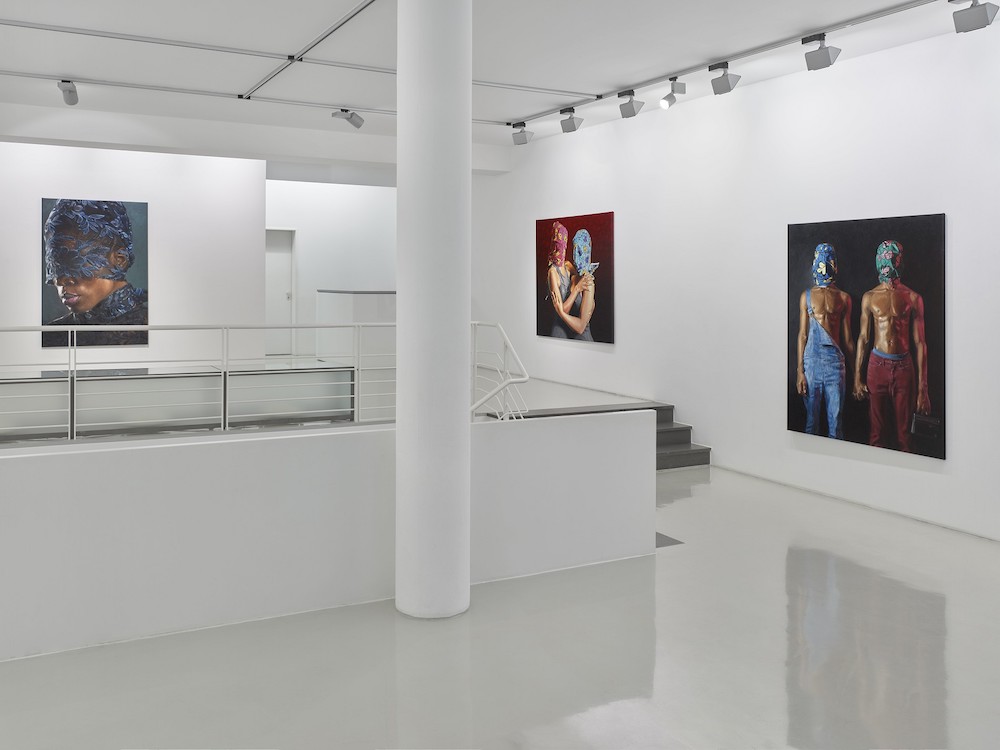 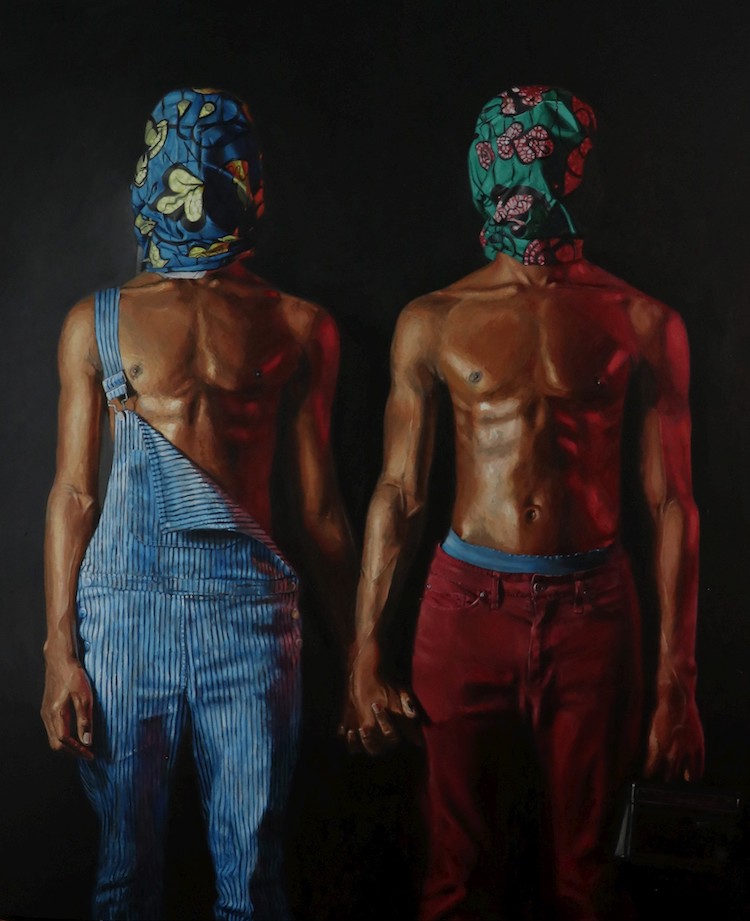 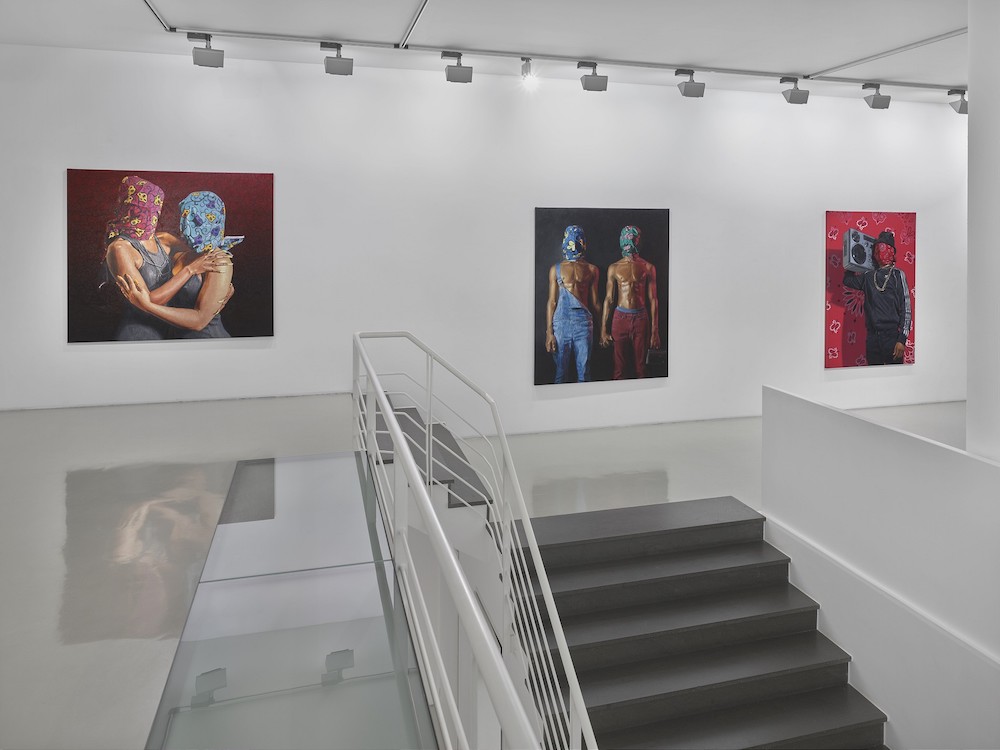 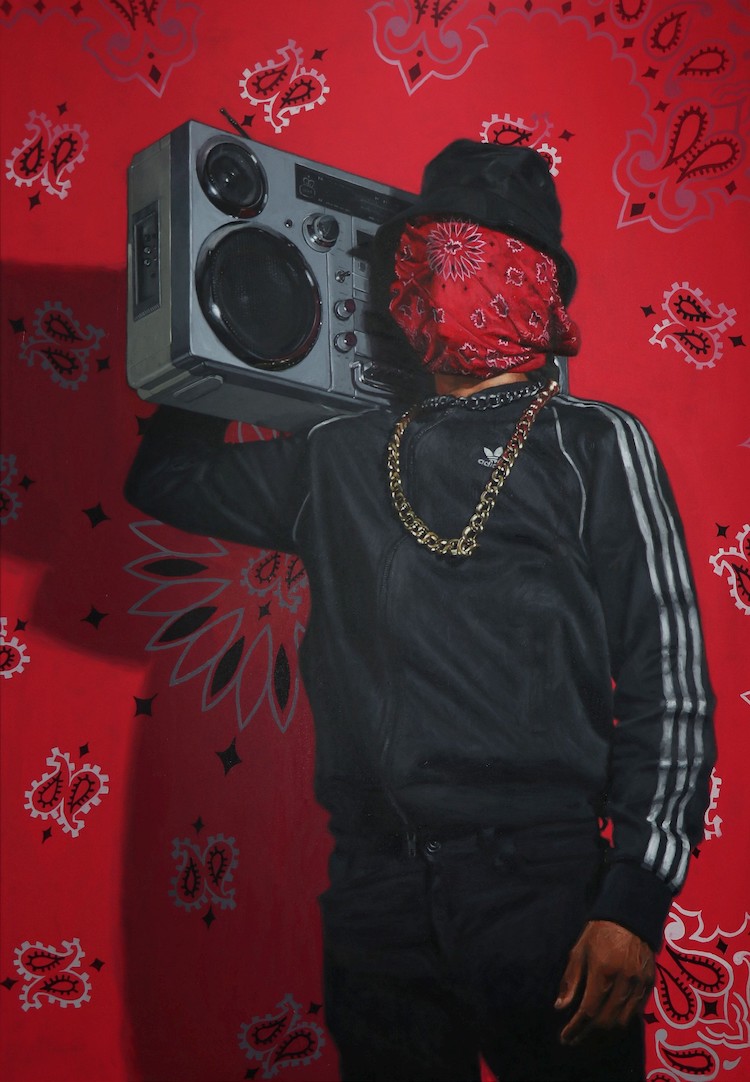 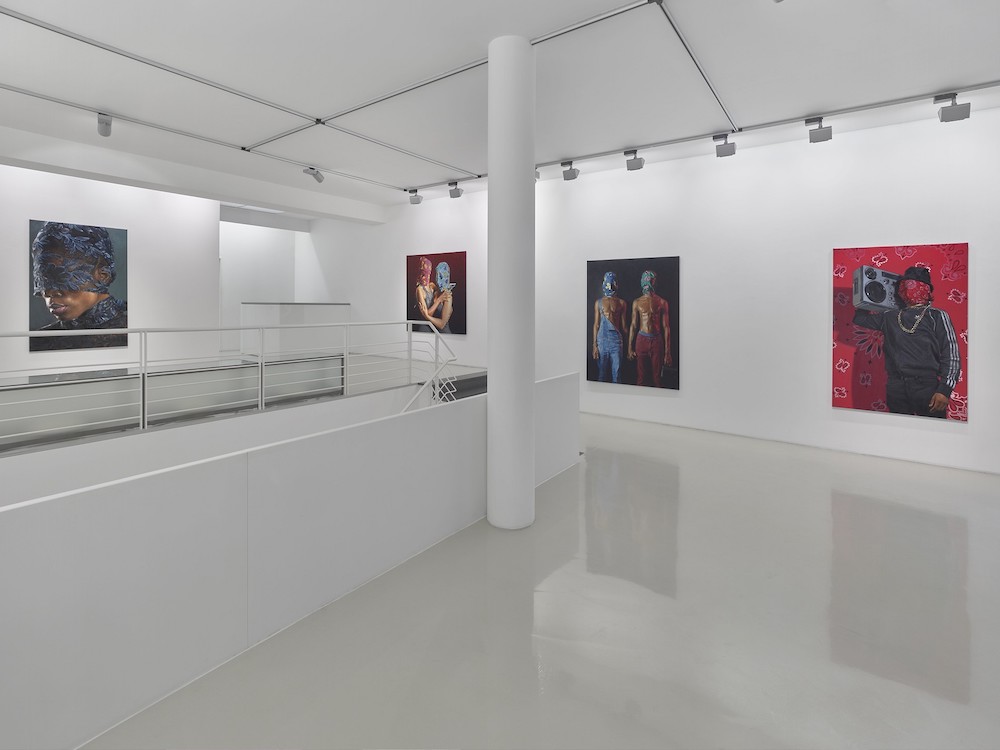 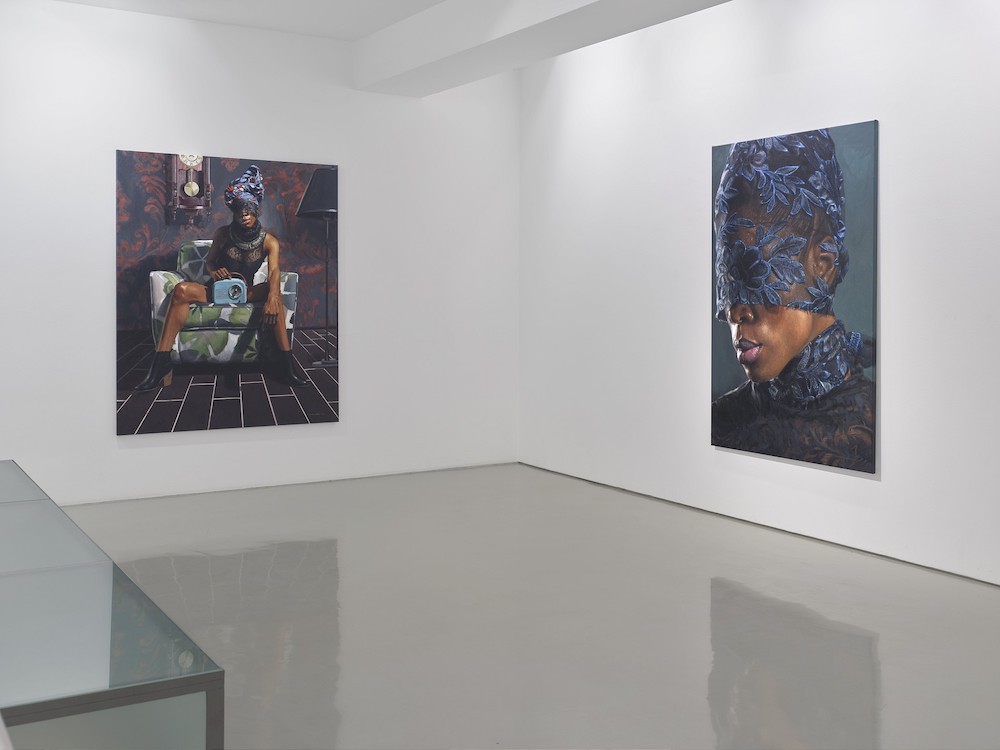 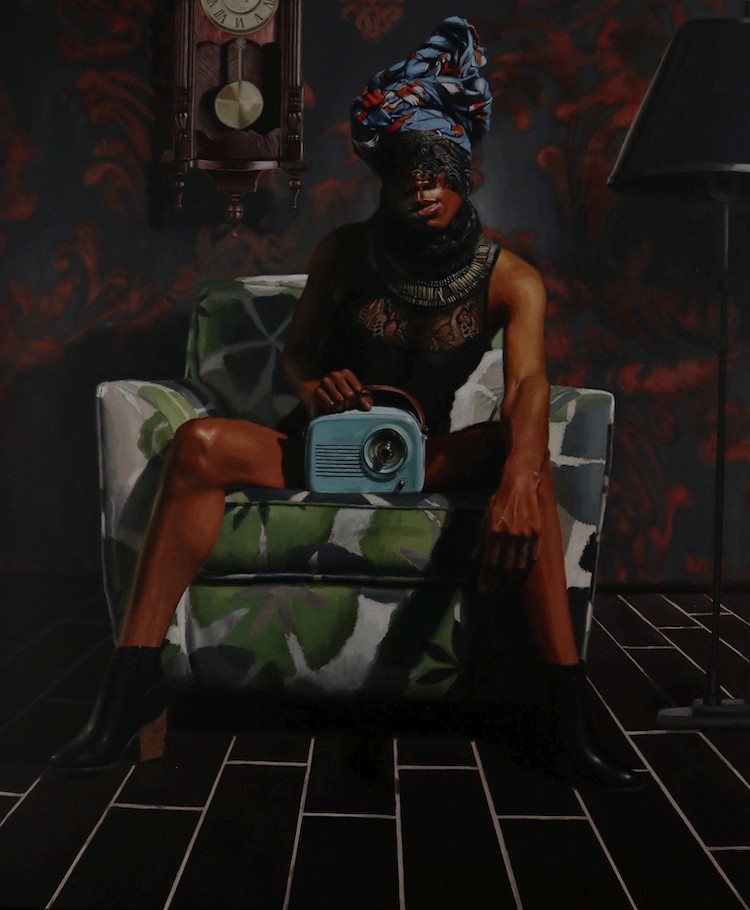 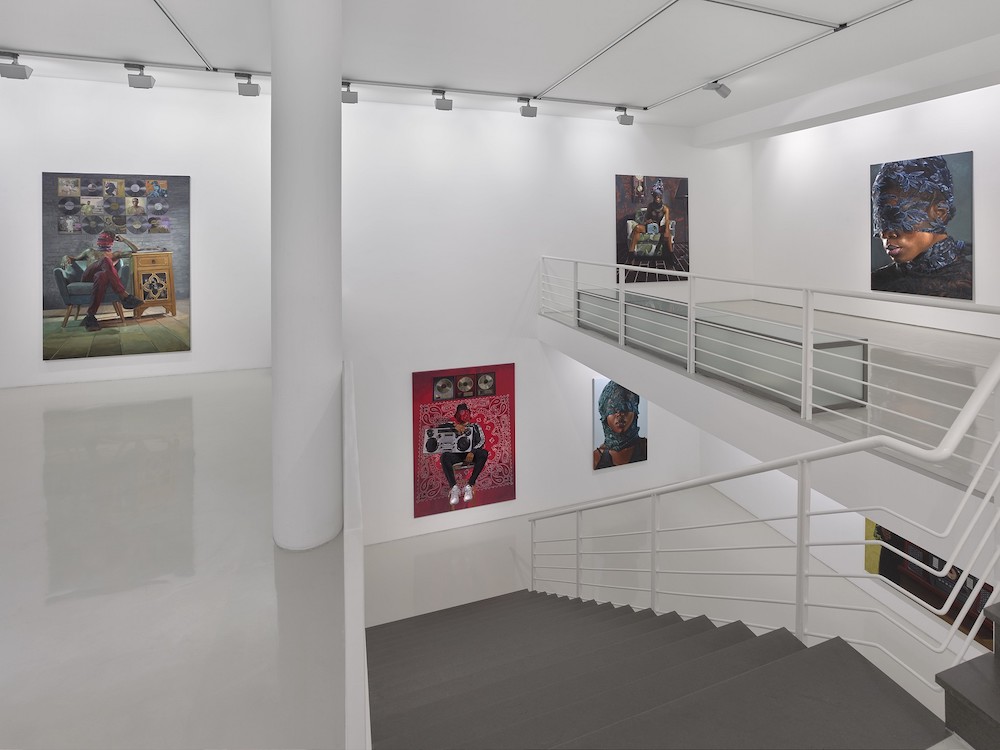 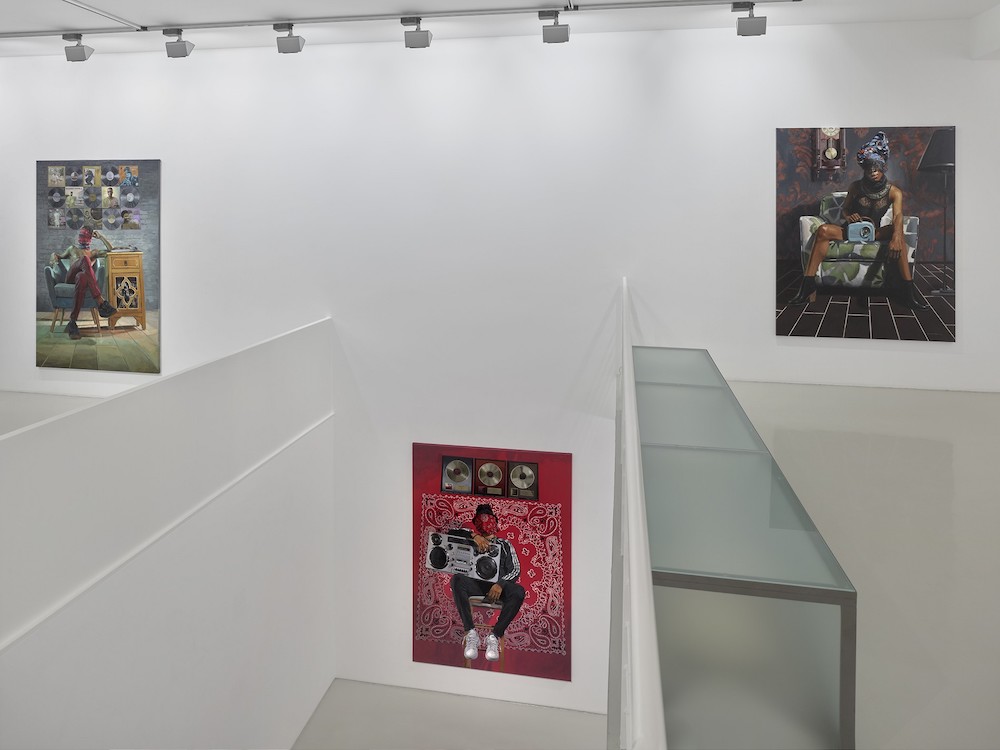 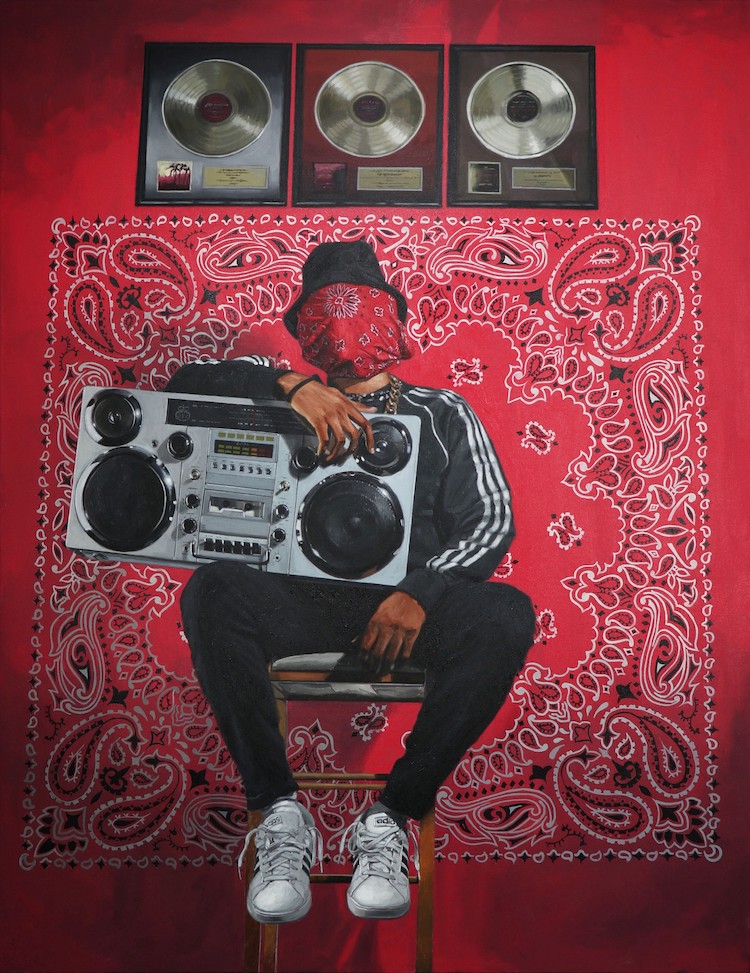 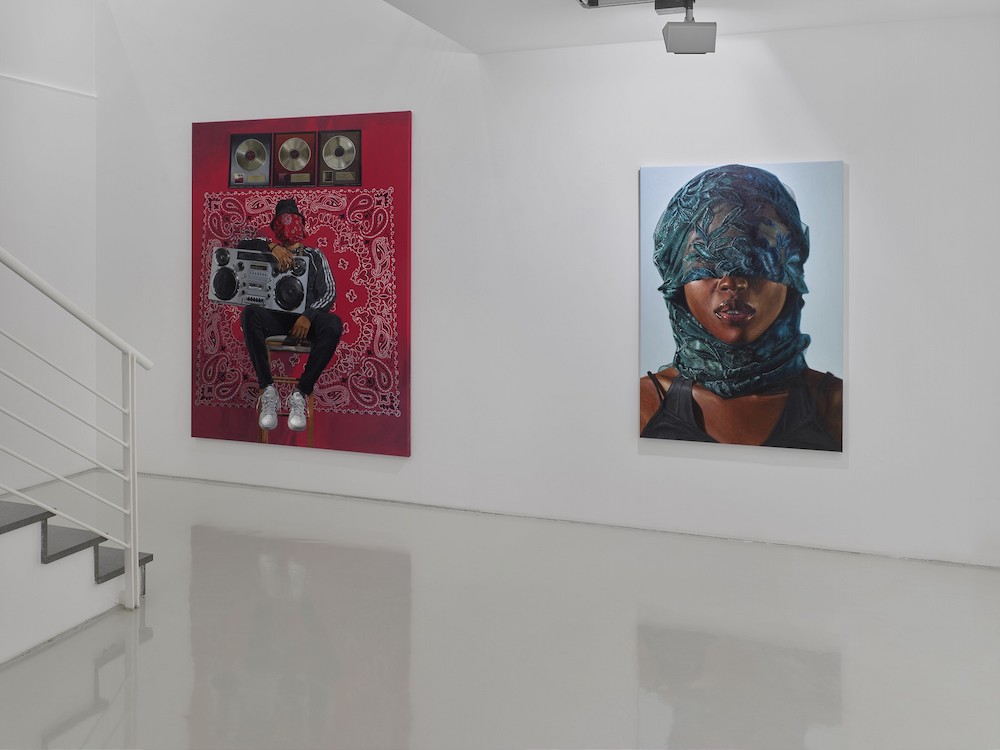 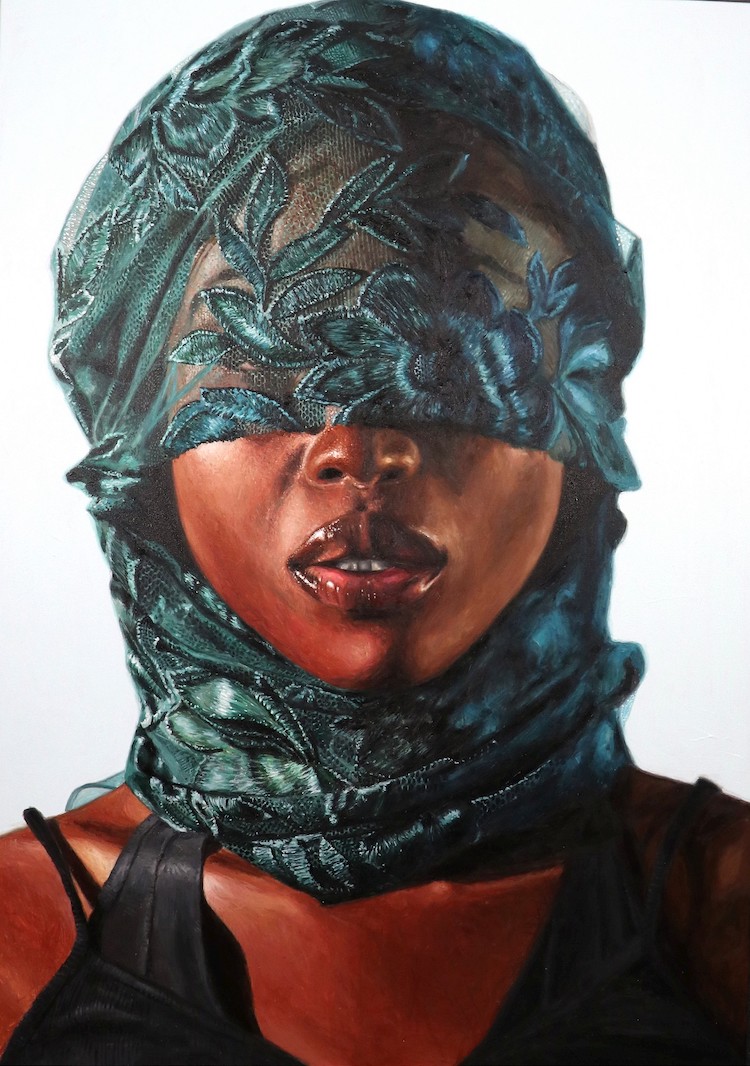 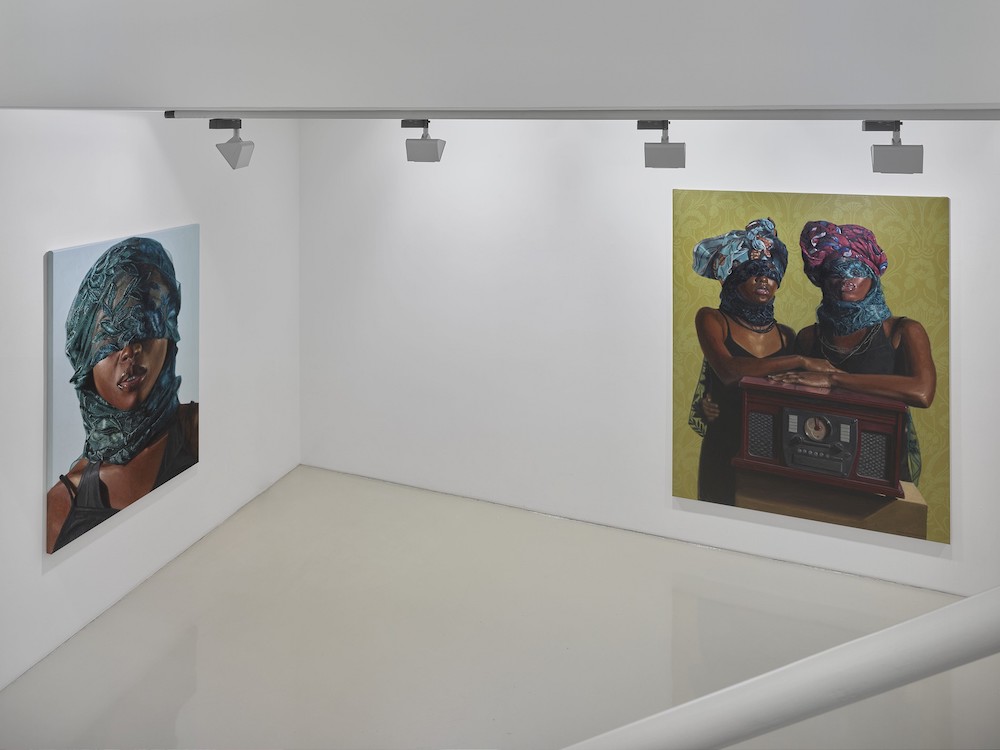 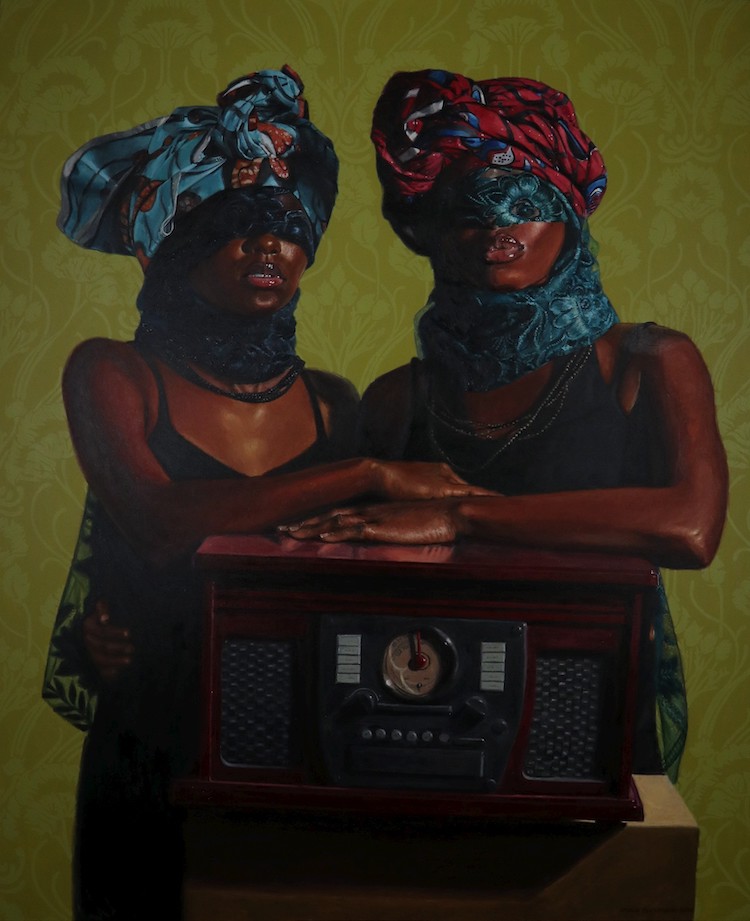 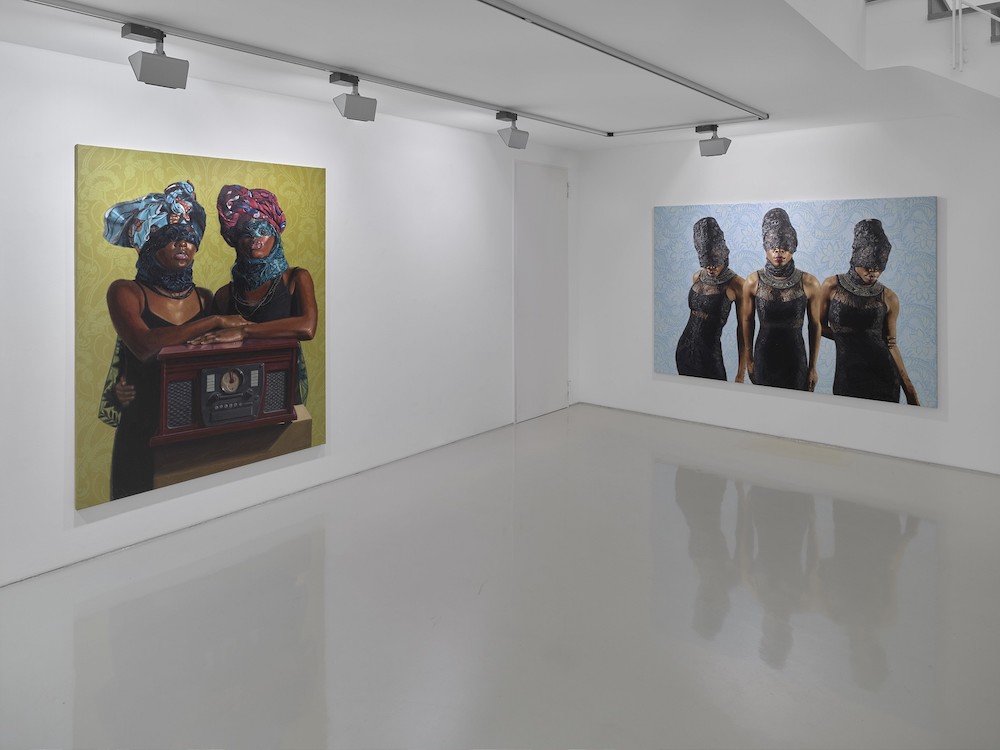 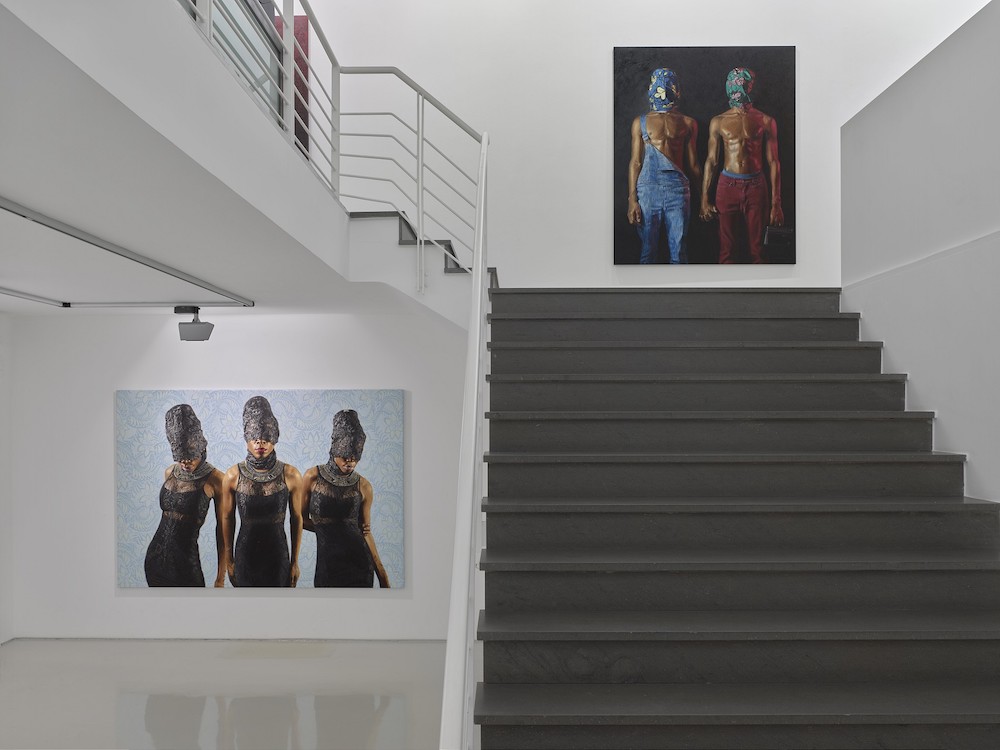 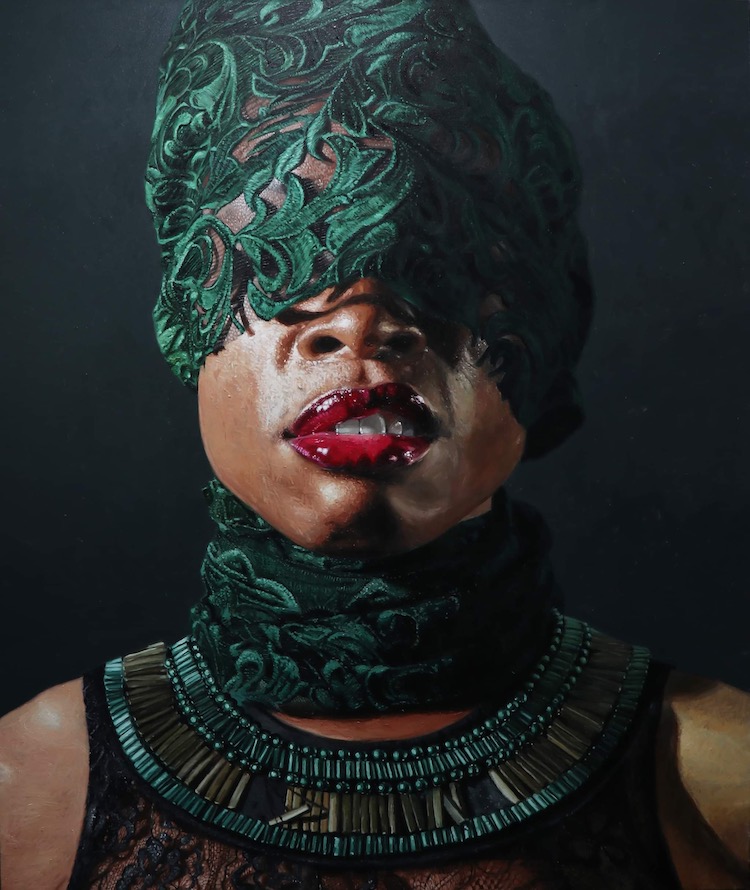 Revolutions per minute defines the rotational speed of phonographic records, those slices of life that offer a glimpse of history and emotion. Revolutions Per Minute also happens to be the title of Idowu Oluwaseun’s exhibition at Galerie Voss in Dusseldorf, thankfully extended, by appointment, through January 31, 2021. In new large scale acrylics on canvas, the Lagos-born, Houston-based artist records his interpretations of the men and women of his homeland as brief, but pungent, indelible encounters, memorable as a 3 minute song to be played again and again on an old 78.

Oluwaseun's practice is based on working from his own photographs, reinventing traditional portraiture photography from his homeland. Meant to present the subject with their most prized belongings, finest clothes, or proudly showing their profession, the images played a big role in international recognition of Nigeria. While the focus of these pictures was on the subject's looks and face, the painter's "anti-portraits" are concealing this part of the image. This approach is, as the artist notes, a reminder of how faceless the minority is, as well as to evoke the imagery of slave-trade during which blindfolded human bodies were traded like disposable goods.

The faceless subjects are a striking metaphor for the lack of recognition of the culture and life of the people of Nigeria and the rest of Africa. The objects that are frequently included in such photography format are now used to add to the emotionally-driven narrative. The radio receivers are serving as reminders of the influence and impact the radio stations and their owners have in the region, while the vinyl records symbolize the power of music and musicians, such as Fela Kuti, to unite the people and stand up to their corrupt governments.

Another interesting element of  Oluwaseun's work is his use of the "twin brothers," a powerful nod to Nigeria's history of having the highest birthrate of fraternal twins. Widely seen nowadays seen as a gift from god or a good omen, twins used to be seen as a bad omen, or proof that their mother had slept with two men. This historically would have led to the killings of twin babies or their mothers. Such atrocities were still taking place in remote areas of Nigeria until recently.

This is just another example of the depth of the artist's work, to transform everyday people into symbols of their nation. Oluwaseun often highlights the subtle differences between the naked eye view and the photograph. Fully utilizing his masterful realistic technique and accenting the light play and contrast, he pushes imagery one step closer to surrealism, creating a mystic ambiance in which his proudly standing fellow countrymen and women earn almost divine qualities. —Sasha Bogojev