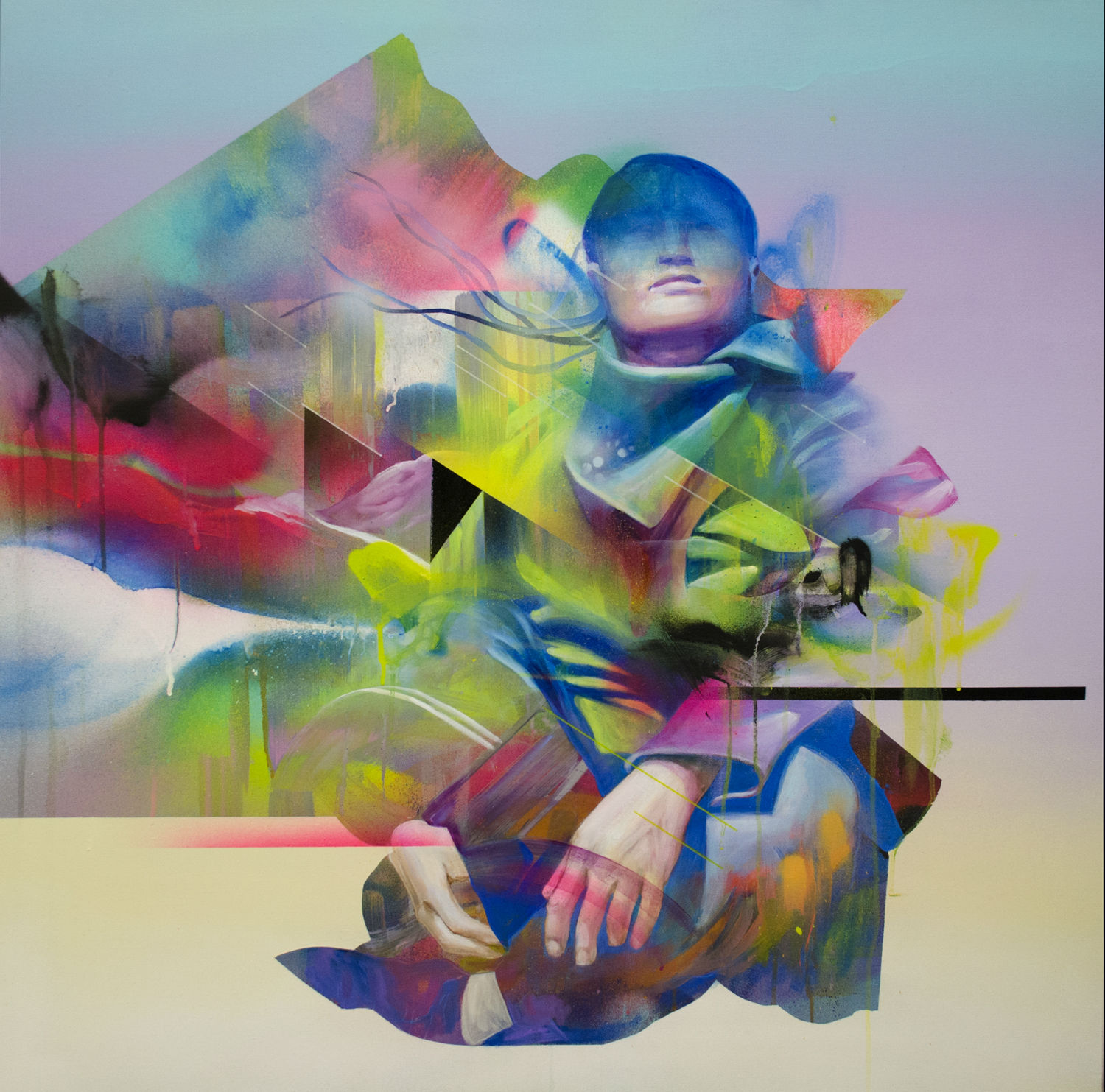 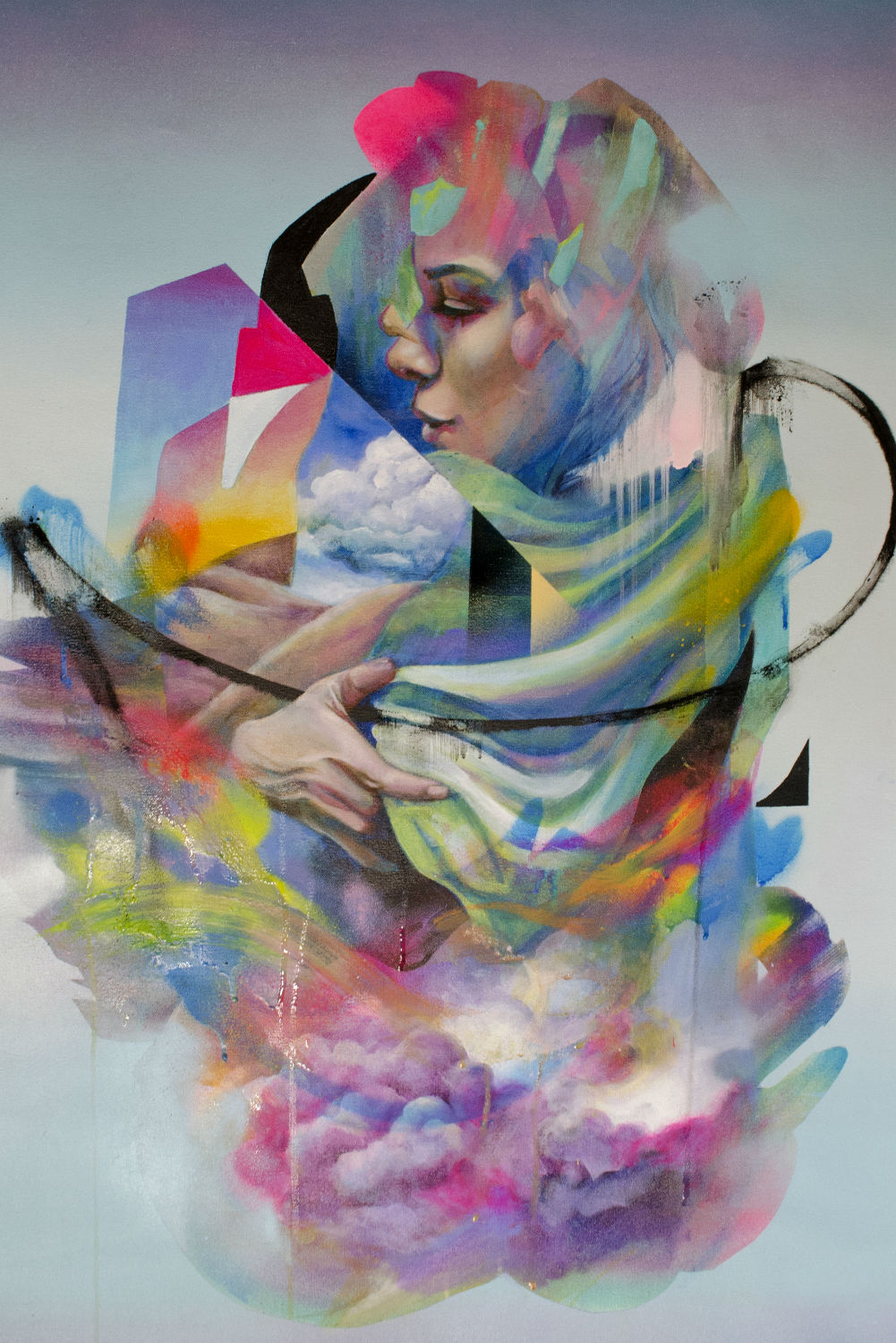 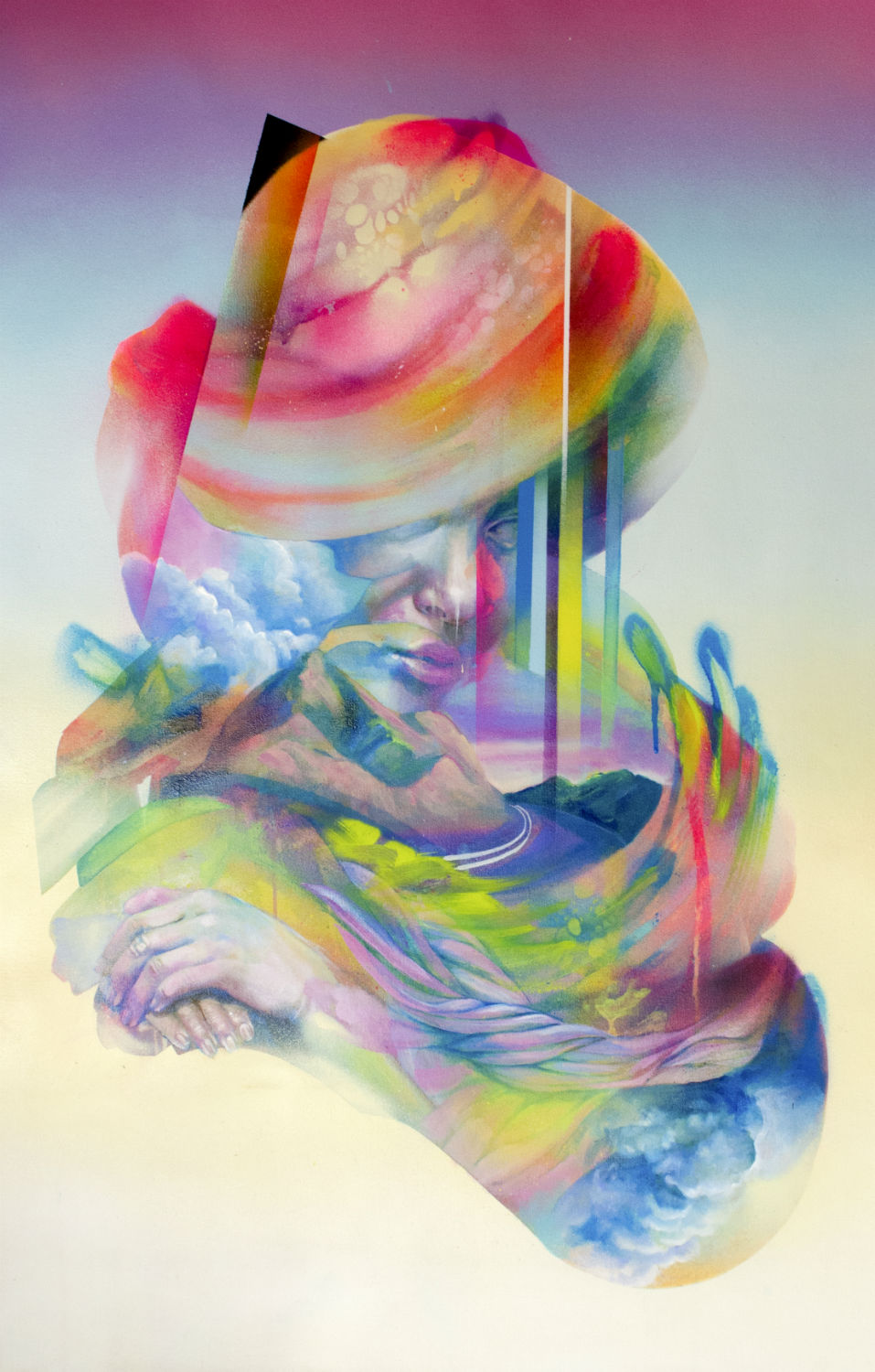 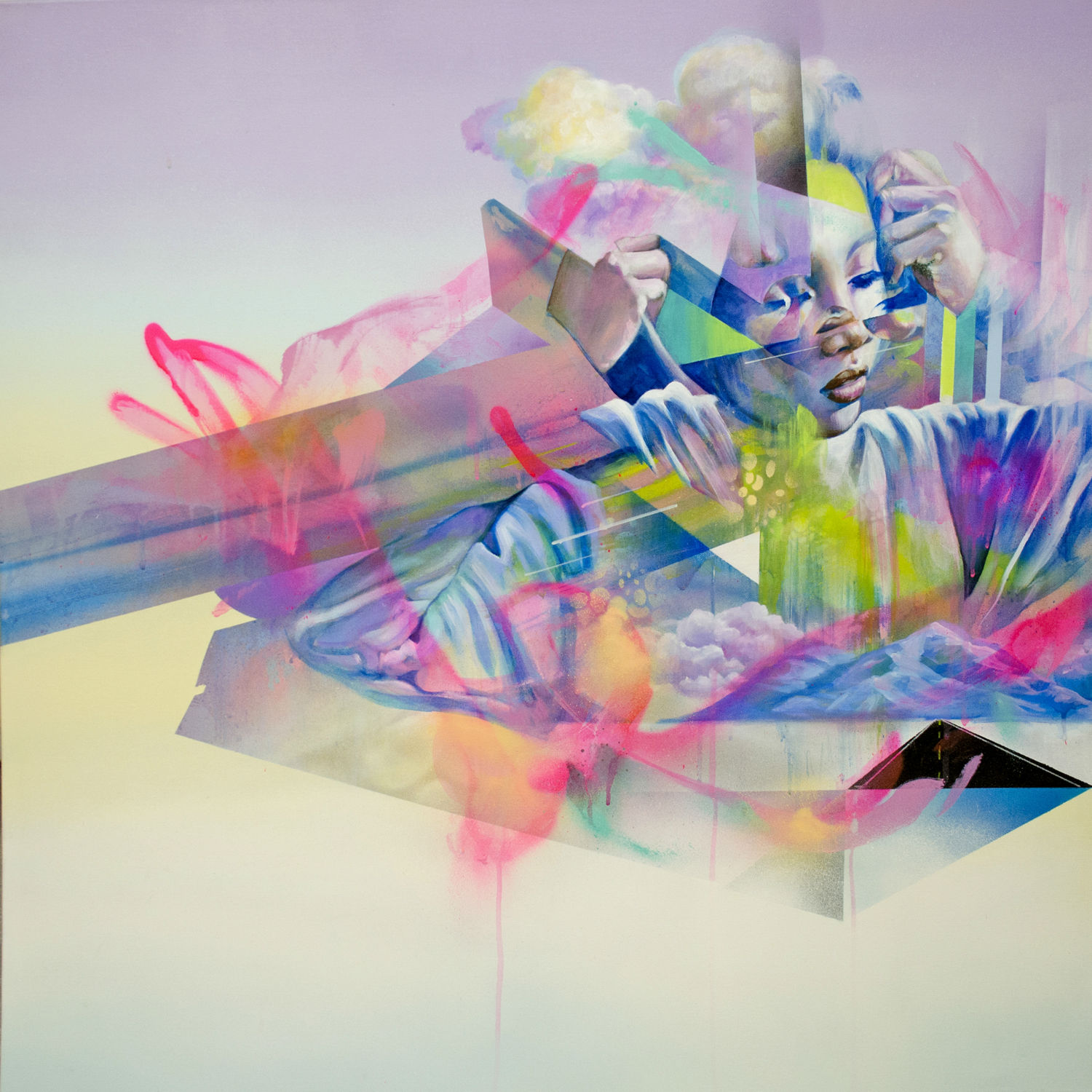 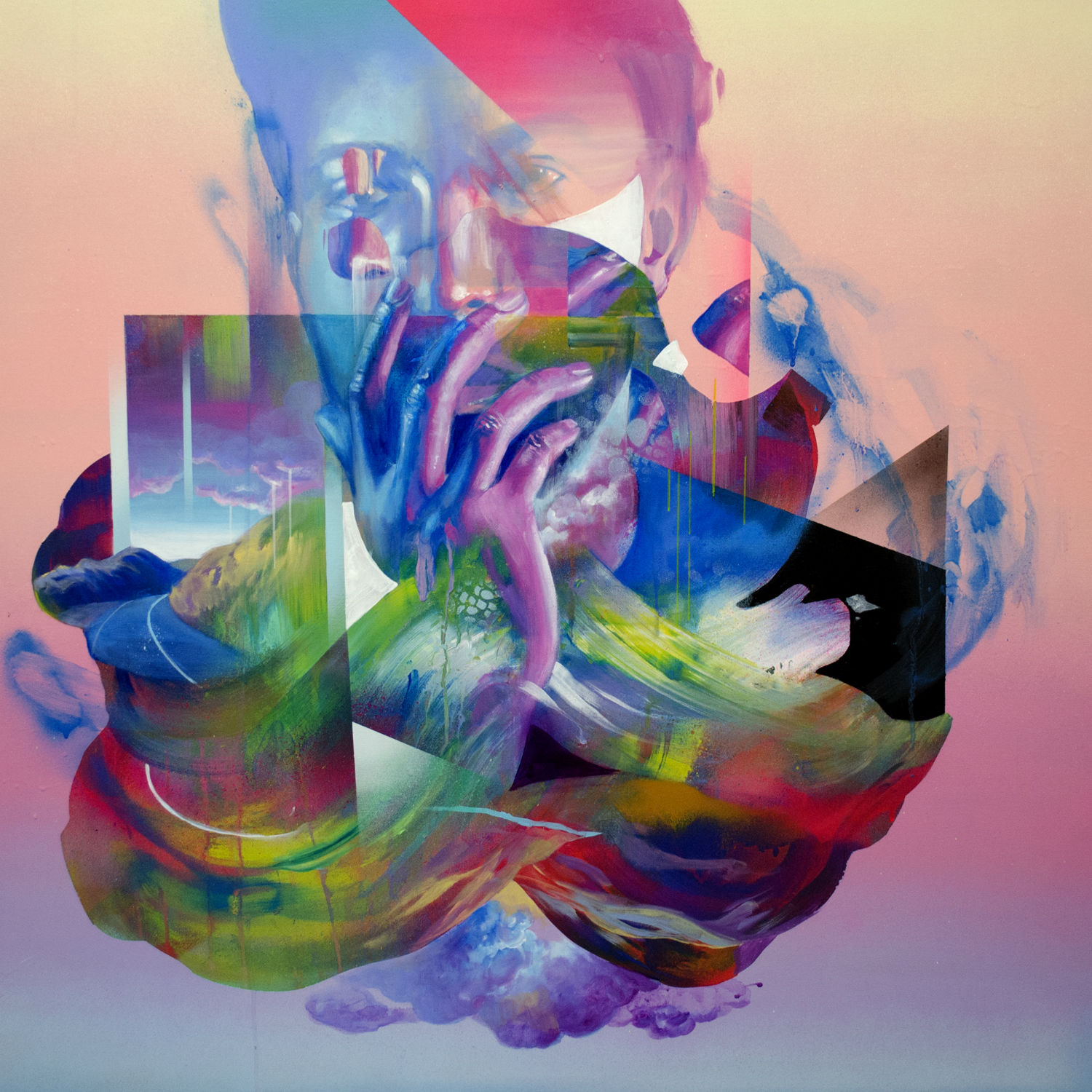 ​Hyperlimbo is a series of all new works from painter and sought-after international muralist Hueman. She returns to Los Angeles with her first solo show in two years—the culmination of countless hours spent hypnotized behind the wheel, ​Hyperlimbo is a documentation, exploration, and discovery of time spent in between.

​This new body of work creates a world that exists within a wrinkle in time, where characters are stuck between worlds, dimensions, and being. ​Hyperlimbo is both a place and a state of mind, inspired by Hueman’s frequent trips between Oakland and Los Angeles. The routes between the two cities are an amalgamation of winding roads, farmland, clifftop views, and oftentimes barren stretches of land that force our minds into new places. Whether we are more prone to concentrate on our driving, the signs scattered beside the interstate, or our innermost turmoil depends on where we are on this road.

Hyperlimbo is more than what is in between the two cities, it also demarcates a clear change in thought between northern and southern California. A massive state filled with multicultural influences and radically different landscapes, the west coast ethos is all encompassing while constantly being in a state of change and battle. The stretch of asphalt between two major west coast cities becomes a time to shed one skin and change into another in order to work within the differing ideologies.

The mundane trip becomes a colorful, dizzying, landscape-laden dream for Hueman, allowing her and the viewer’s mind to wander. Although done akin to her signature graphic style, her returning exhibition in Los Angeles also reveals a maturity in her work. Breaking from strict fractal lines, she has incorporated more refined figurative painting into her oeuvre alongside swirling bold colors and geometric shapes. The pieces blend a vivid neon palette with gradient horizon backgrounds and increasing negative space to create a depth and central focal point in each intricate composition. Hueman’s geometric forms appear to explode into prisms of light and are combined with paint splatters to further elicit a sense of movement and dynamism that has been carefully cultivated by this young artist.

Jux contributor Lauren YS caught up with Hueman on the occasion of her new exhibition to find out more about her new body of work.

Lauren YS: "Hyperlimbo" is an exploration of the liminal state; the mode of transit between places and states of mind. As a traveling artist, do you feel more comfortable being in a state of motion than being still?

Hueman: I definitely feel more comfortable being in a state of motion. If I’m in one place for too long I became bored and stagnant, and when I’m bored I think too much. And when I think too much, I end up getting anxious or depressed. This has less to do with actual travel and more to do with just being constantly mentally stimulated. I always need to be working on something, always need to be creating.

What is the most difficult part of constant movement for you?

A feeling of stability. There was a point in my life where I was just living out of suitcases, which was exciting but also exhausting, and it makes it hard to foster solid relationships with people when you’re constantly on the move. My closest friends and family aren’t artists, nor do they travel as often as I do, so I feel bad when I’m the one who’s constantly absent. I feel like I miss out on a lot of important things and life events.

How do you select the subjects you portray? Do the subjects featured in "Hyperlimbo" have anything in common with each other

For my work, it’s less about characters or a narrative and more about expressing an overall mood or emotion. So to best communicate feeling, I choose subjects that tend to be expressive with their facial features or body language. And I hadn’t realized this until now, but like me, over half of my models for this show have resided in both LA and the Bay Area at some point.

Your work is a combination of abstract gestures and refined figures. Which part of your process is your favorite? Does one come more easily than the other?

The abstract gestures are hands down my favorite part of the process. It feels good going straight to the canvas without a plan and constantly surprising myself. There isn’t much thinking involved at this stage and it’s more therapeutic than anything. Painting the figurative aspects are more challenging and give me a lot of anxiety, but when I’m done it ends up being the most rewarding part.

Do you have any rituals when you make work? If so, what are they?

As soon as I step into the studio, I turn on music, and light candles. My work has an ethereal quality so I set the tone before I get to work.  I can’t listen to anything that gets me too hype or I start throwing spray cans and kicking things. I also set up my tools and paints as fast as I can—it’s like a little game for me, seeing how fast I can set up my workspace.

This series has an underlying commentary about the different mindsets between cities in California. How does the LA mindset differ from Oakland's? Why did you end up in Oakland?

LA is flashy, excessive, opulent. It’s the land of celebrities, plastic surgery, and chasing dreams. But it’s also saturated with creative people in all sorts of industries, from film and television, to music, theatre, dance, and the visual arts. It’s inspiring to constantly be around that sort of energy—LA is always buzzing. Oakland is incredibly creative as well, but more laid back and down to earth. I ended up in Oakland because I grew up in the East Bay so it was already like home to me, my family is out there, and I reunited with my ex-boyfriend (now husband) who was out there. By the time he came back into my life, I was at a point where I felt like I was ready to move on from LA. I still make frequent trips down south, but it’s nice to come back home to a calm, quiet place. I’m very much the embodiment of these two cities—I love being out and about, getting dressed up and going to events, but at the end of the day I’m also a very simple person who wears sweats maybe too often, has a disgusting sense of humor, and a diverse group of friends who could give a rat’s ass about what you do for a living or the credits on your IMDB page.

Which X-Man would you be and why?

Storm. She’s very calm and level-headed, intelligent and regal, but cross her and she can fuck your whole shit up! And she can fly.

Which is your favorite piece in the series and why?

Halfway to the Horizon. It’s a piece that in my opinion best embodies the theme of the show—I like the movement, composition and colors. And there are elements that you would see when driving down the I-5: clouds, hills, road signs and farmland.

I just want to continue doing exactly what I’m doing now, which is creating artwork for a living, and to never get a “real” job ever again.

Where is your favorite place to stop off on your journey between Oakland and LA?

Kettleman City exit for a multitude of reasons. It’s sort of the halfway point, they have a Taco Bell there, and the newly opened Bravo Farms which looks like it was taken straight out of Disneyland. They’ve got really good pistachios, an ice cream shop, and an excellent beverage selection. And most importantly the bathrooms are well-maintained.

Is there anything else you'd like us to know?

My show opens up this Saturday in LA! Hope to see you there!

An opening reception will be held at KP Projects on Saturday, January 14th, 2017 from 7-10pm