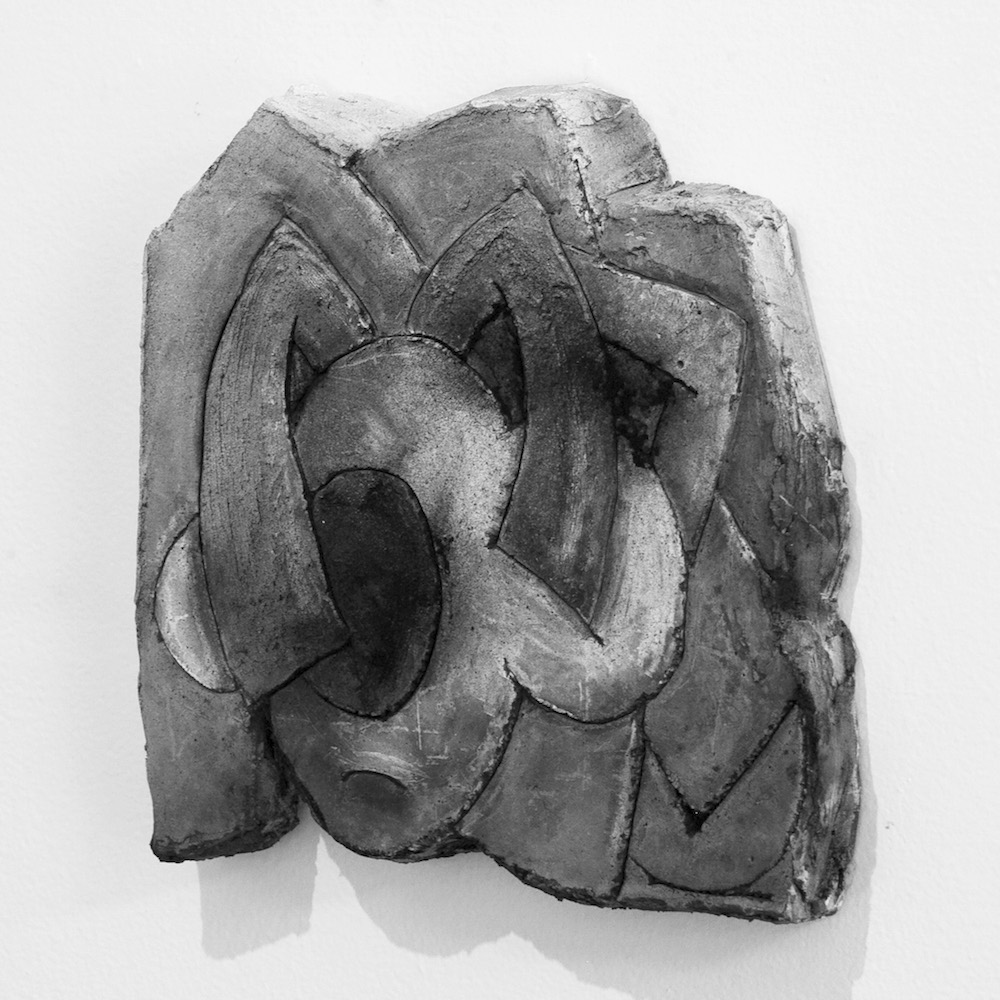 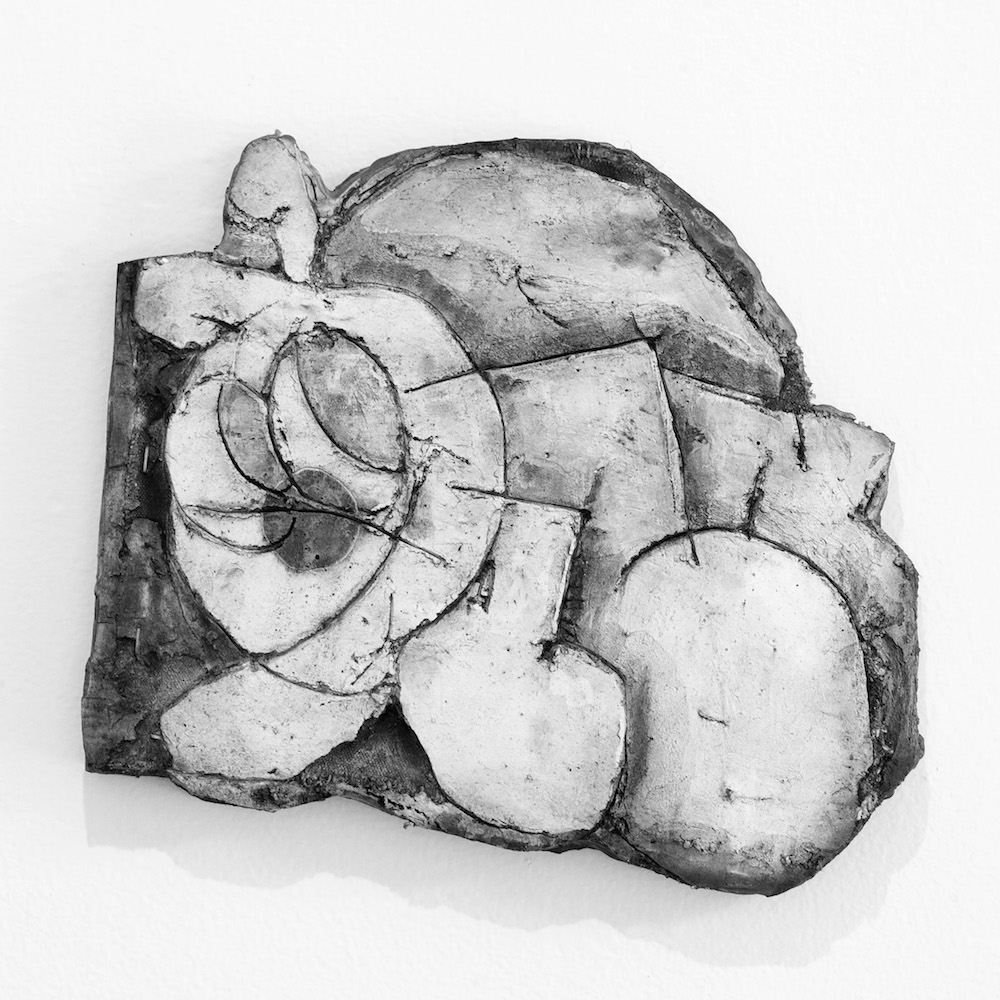 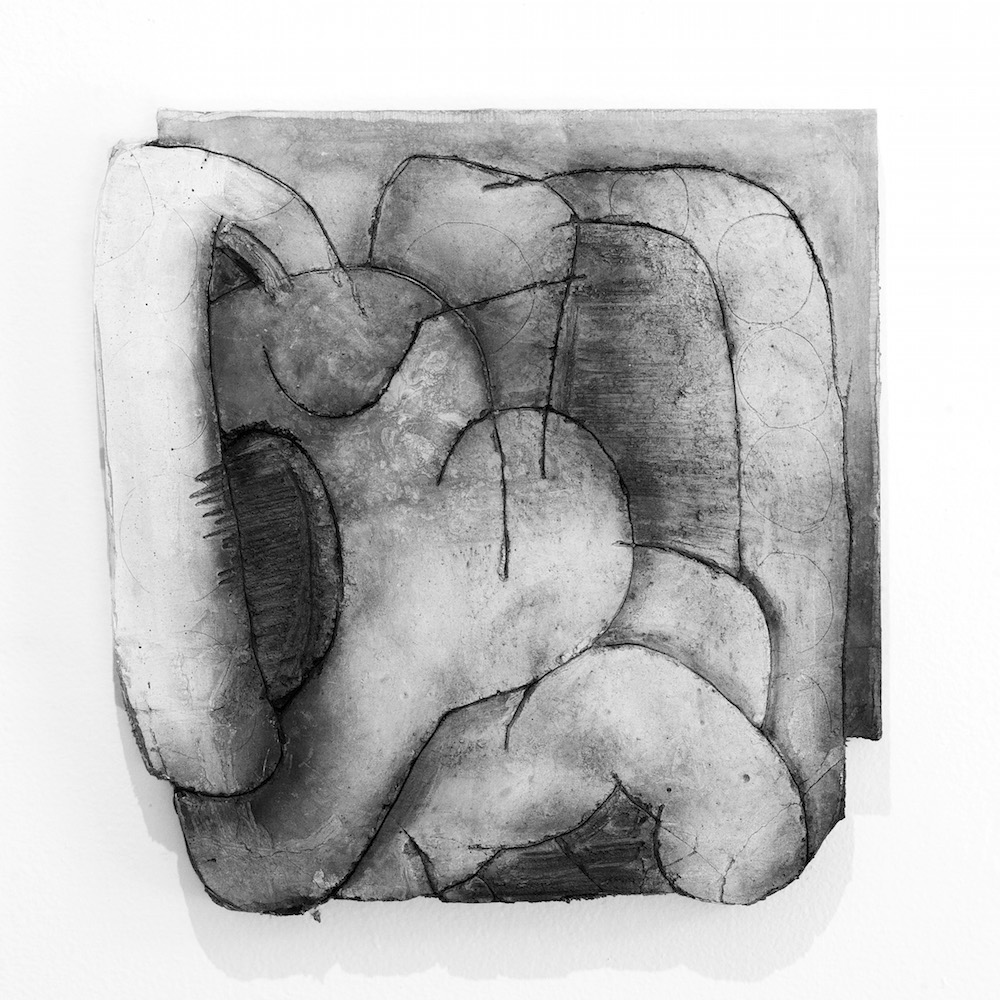 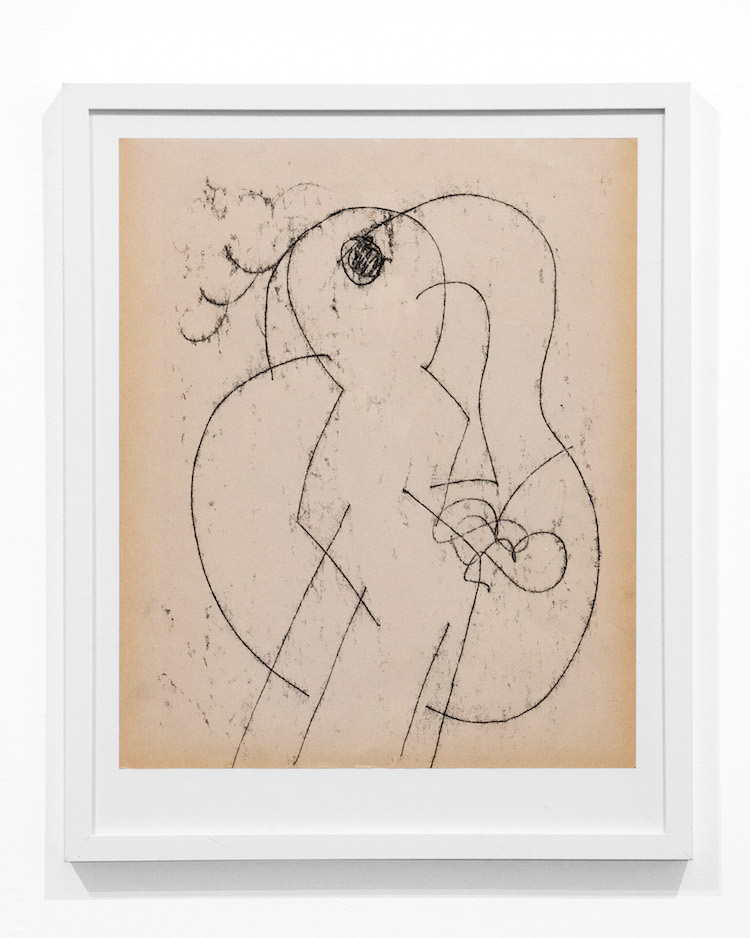 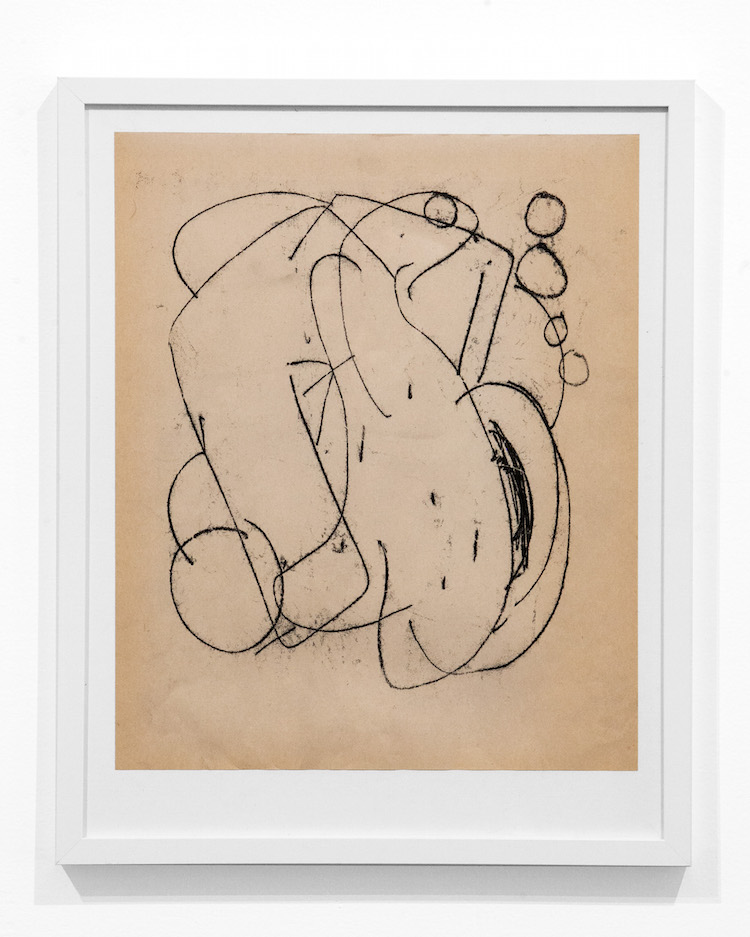 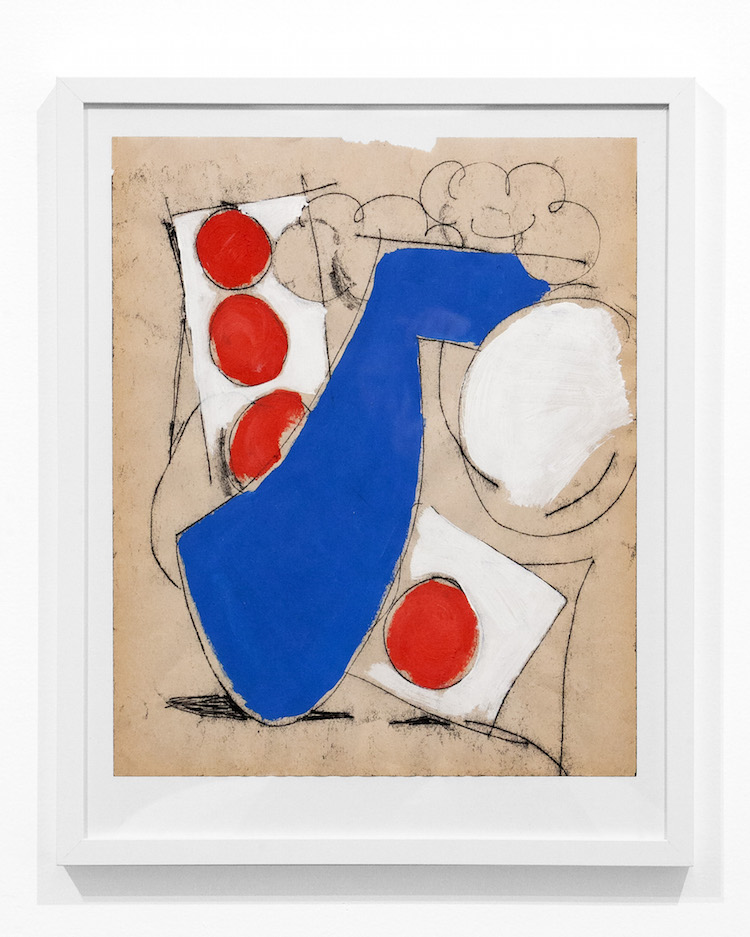 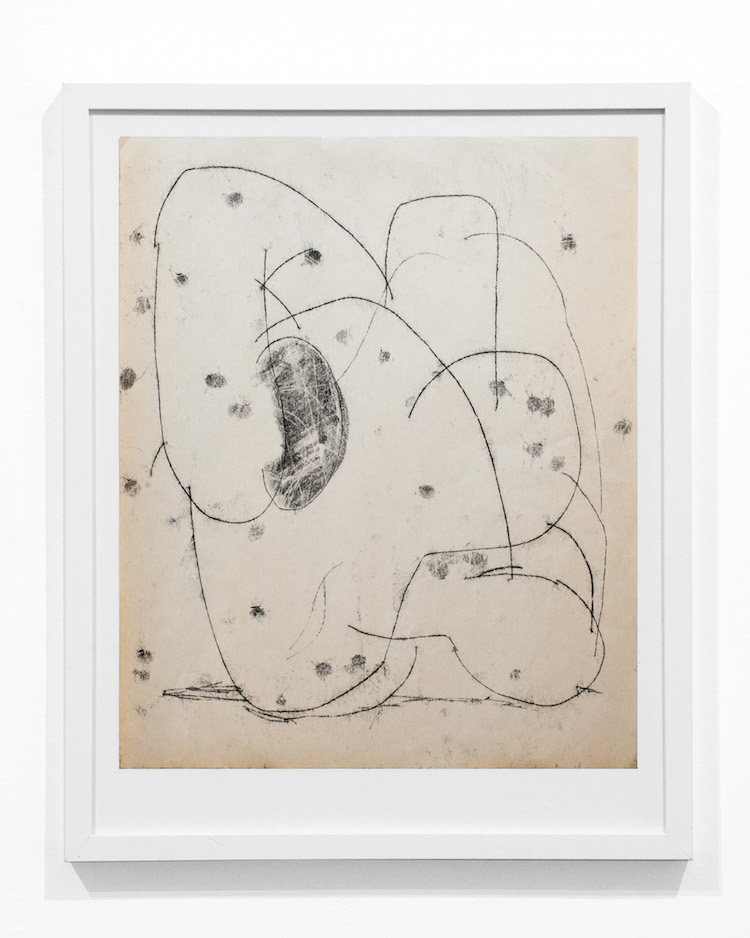 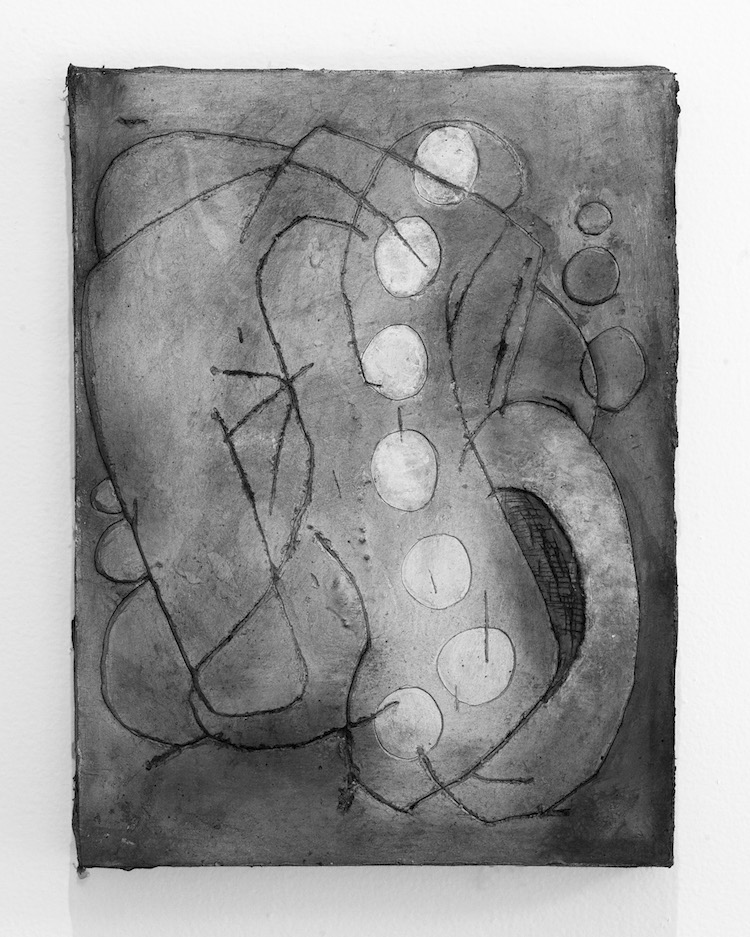 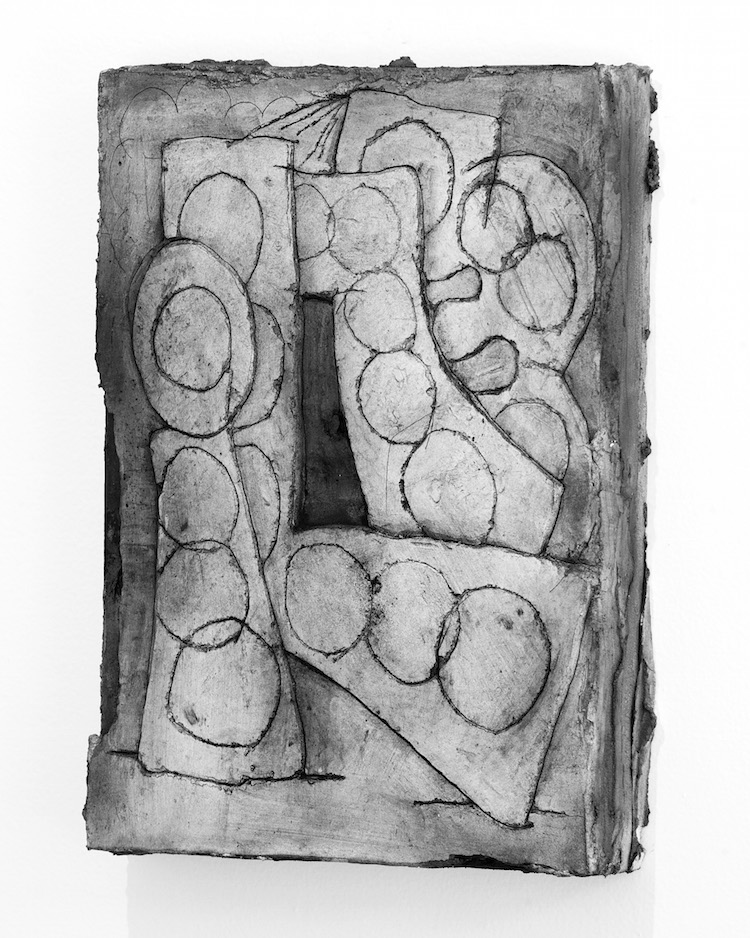 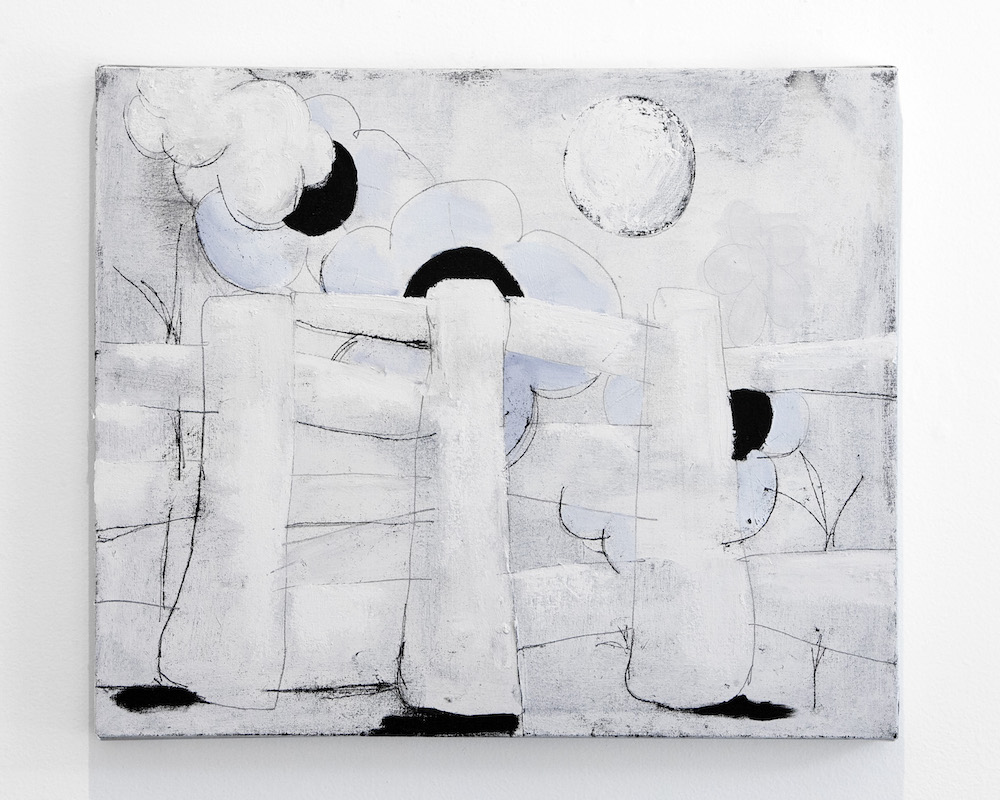 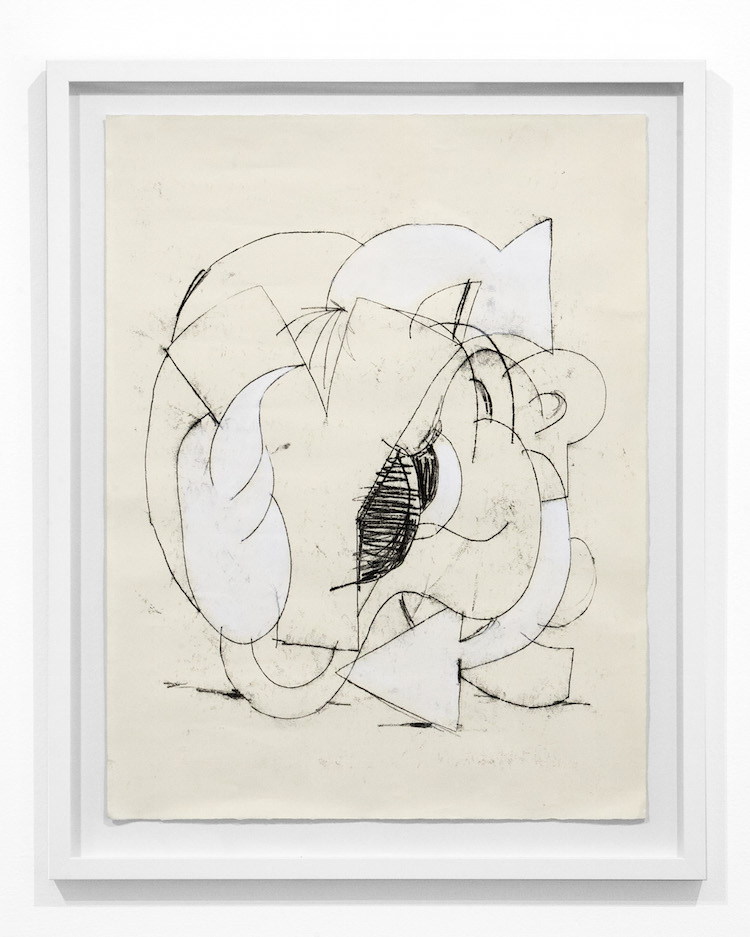 Erik Bender, has had an exceptionally busy year. Between two solo shows and a low-key relocation, a shower of dust finally seems to be settling for this emerging interdisciplinary artist. Among the hustle and bustle for his upcoming solo exhibition, REAL ICKY, First Amendment caught up with Bender in his Oakland studio where he broke down the process and reconciliation of ideologies for his latest series of 2D and 3D works. 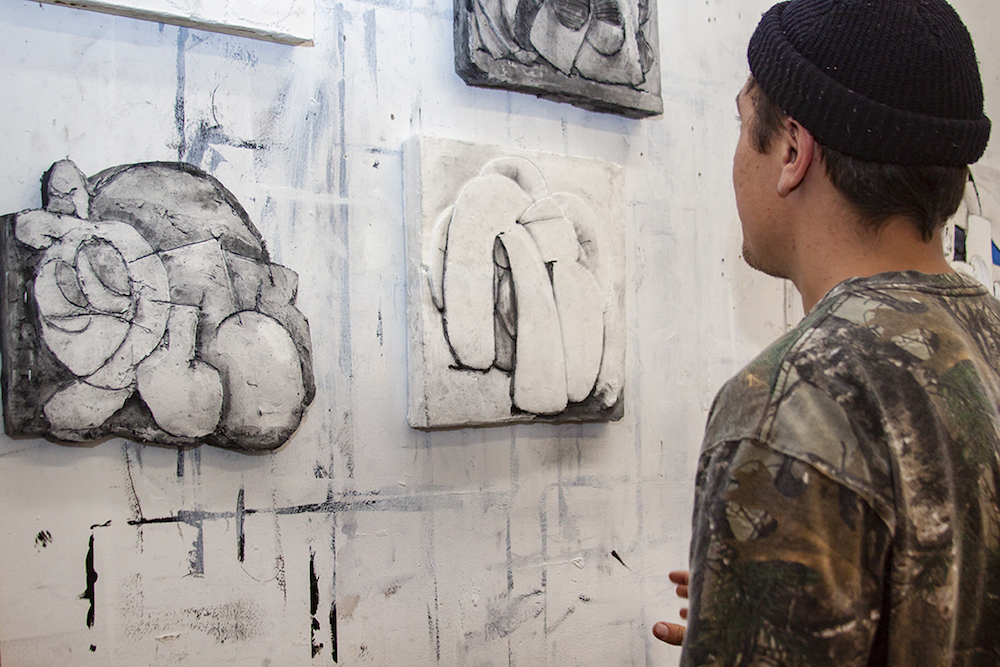 L. Herrada-Rios: The materials you use are very specific, especially the self-described tablet pieces. Was the practice developed by accessibility of materials, or is it your method of diving deeper into your concepts?
Erik Bender: When I began this work, I was making drawings mostly, and trying to figure out how to organically move figures and shapes into painting. It started to make sense that I would produce work that was more physical—connecting to the monumentality of the figures' rendered form. I started by troweling drywall mud onto panels, which worked pretty well but, for some reason felt artificial. Around that time, I was (maybe not) coincidentally given an assignment where the only prompt was to use a whole bag of plaster, which I hadn’t ever worked with, and it all kinda clicked. I started pouring it onto the face of panels and making drawings while the plaster was curing. The process has refined itself a lot, but overall, it still feels mysterious to me, like I'm discovering something rather than making it. 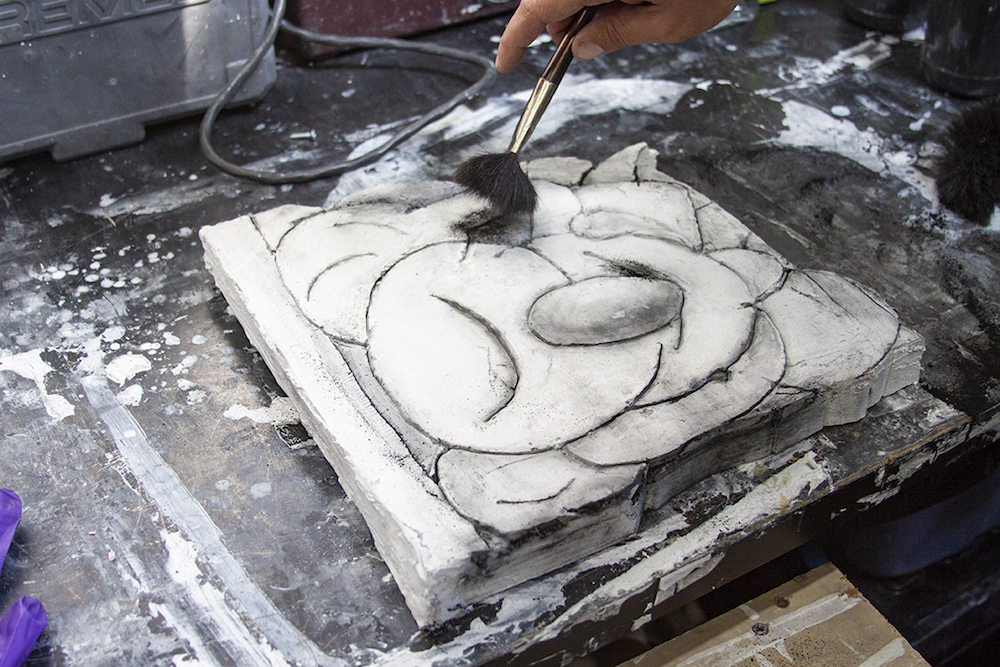 You reference inspiration from artists like Nicole Eisenman and Dana Schutz, and movements like the dawn of graffiti in the 1970s and ‘80s. With a truly unique blend of fine art abstraction twined with the physical and dynamic world of street art, your work is robust and familiar, yet inconspicuous. How do you see street art evolving within a fine art context, and where do you see your work within that paradigm?
I used to be a pretty straightforward figure painter, painting from life and photos, matching color, etc, and for the longest time, I had intense reservations about letting my graffiti anywhere near my art. It felt especially sinful in the wake of the street art wave which, truthfully, has always seemed corny to me. (I also think there is a very distinct delineation between street art and graffiti, but that's another conversation...) I could already hear the scoffs from all sides. But there came a point in school where I was doing a lot of research, considering where my urge to make really comes from and what I’m truly excited about, and it just made sense to let graffiti in. It’s a tricky thing, honestly, and still feels off sometimes, but there are people who do it poetically and subtly, and those are the people I am really looking at. I am as inspired by what’s inside MoMA as I am the shitty tags in the alley outside—it’s kind of all the same to me, if I’m being honest. 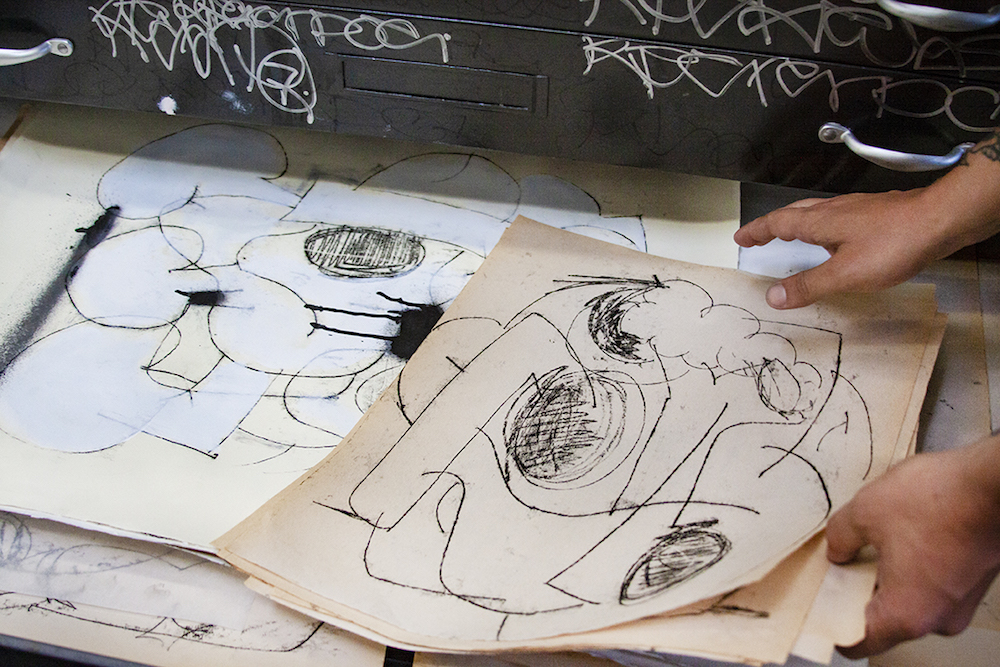 In the same way graffiti and street art talk to the world-at-large, your shapes and characters often tangle in some sort of conversation. There’s tension, light-heartedness and, even, curiosity peaking through every crevice. What kind of questions are these subjects proposing? How do you inject your voice into your works?
I think the work and its elements come from an intuitive and personal place. Just like style and techniques are idiosyncratic, the subjects and their expressions tend to be as well. It’s really a mythologizing of my own reality, with works referencing one another and building a story. The work ends up having a conversation about itself. The good and bad tensions push and pull; it’s all stuff that passes through me, trying to reflect the plurality of human emotion. And it may end up connecting to larger, more complex social conversations as well, considering graffiti’s origins as a social/youth movement that continues to function as an anti-capitalist reclamation of space, with works involving critical depictions of police, the political establishment, and social problems. 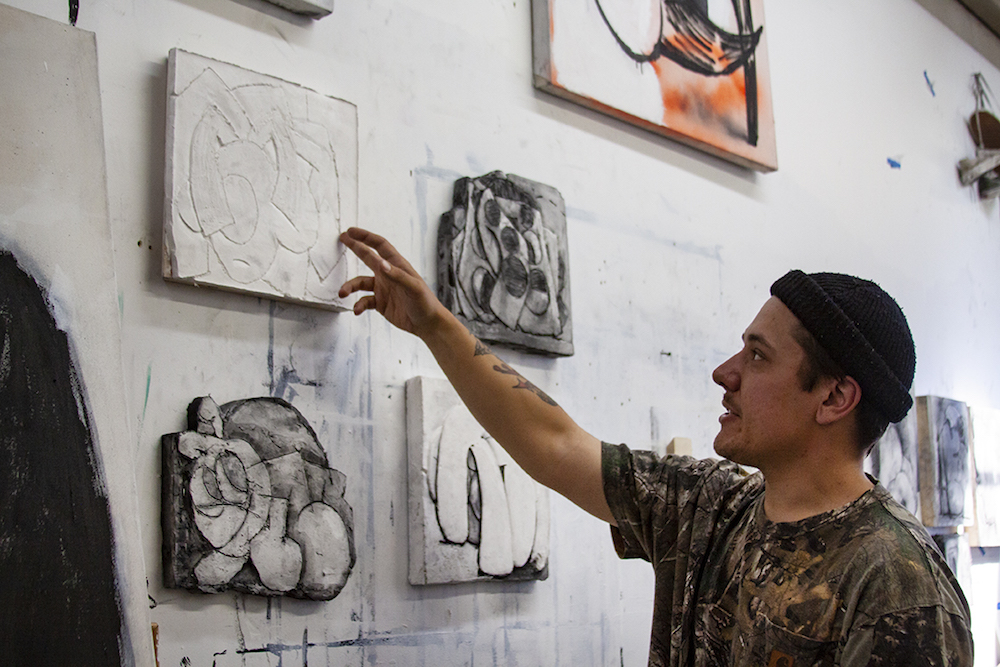 You’ve spent the better part of your adulthood fully immersed in city life and have moved to a more serene yet isolated town where you now confront elements of the natural world more often than when you were in an urban environment. The title of your upcoming show is, in part, an acknowledgment of your personal readjustment to new surroundings. Do you think your new environment will have an influence on your concepts and connection to the materials you use?
I think the work was already making that shift before the move. I was allowing more things in, including references to the natural, as a vehicle for me to explore more abstraction in the forms and to push the plaster works into new areas. The title was something I came up with instinctively and it casually ended up, as things often do, to be a sort of self-fulfilling prophecy.

Living in a third-floor walk-up in downtown Berkeley, I hadn’t really seen a bug in my house for, like, four years, but in our new place, I see them all the time. I started to think of them as little mascots, emblematic of change and adjustment. Sometimes creepy, sometimes goofy, but ultimately things you just get used to. I see bug-forms in the show as an embodiment of the same wonky energy that flows through a lot of the work already, just referenced within new subjects.

Erik Bender's solo show, REAL ICKY, opens Saturday, August 3rd, with an opening reception from 7 to 10 pm, and will be on view through August 30th.