Dang Olsen Talks Tech, Comics, Drugs, and Being in the Videodrome 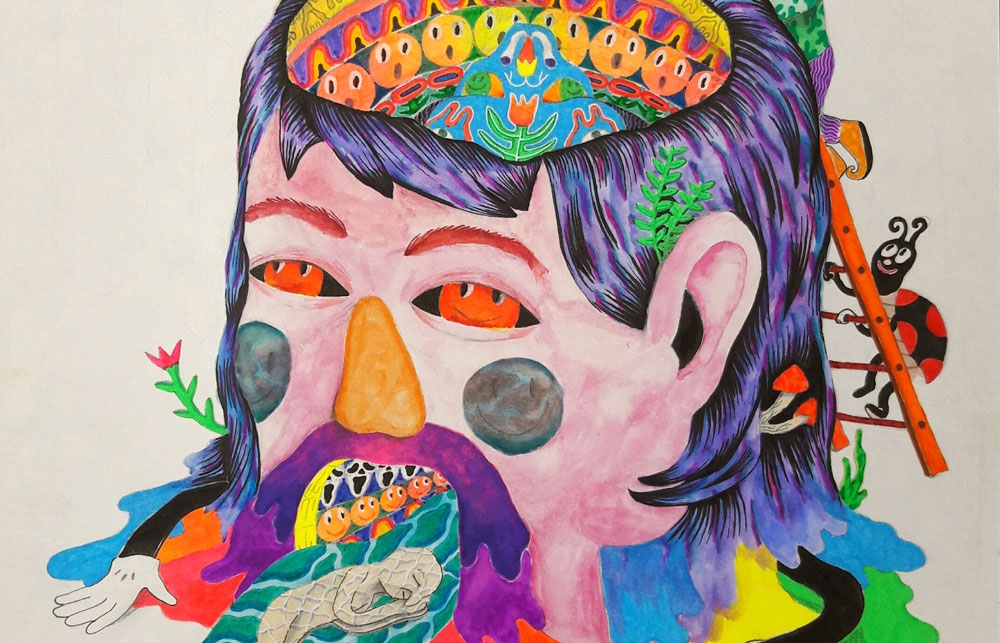 Dang Olsen makes bizarre, colorful paintings that take childlike cartoon drawings and gives them a thoroughly psychedelic treatment. The paintings take on innocent themes as well as more mature ones, standing somewhere in between the traditionally playful LSD-inspired smiley faces and something more substantial, always hinting at an exploration of a larger concept. As we spoke with Dang, it's clear that his work comes from a place of genuine curiosity with the world. We asked Dang a couple questions to try and get acquainted with his vision of reality.

Dang Olsen makes bizarre, colorful paintings that take childlike cartoon drawings and gives them a thoroughly psychedelic treatment. The paintings take on innocent themes as well as more mature ones, standing somewhere in between the traditionally playful LSD-inspired smiley faces and something more substantial, always hinting at an exploration of a larger concept. As we spoke with Dang, it's clear that his work comes from a place of genuine curiosity with the world. We asked Dang a couple questions to try and get acquainted with his vision of reality.

Where are you from?
I grew up in Toledo Ohio, next to an oil refinery. It's mind boggling how or why they would put these refineries in the middle of neighborhoods. There is a giant flaming tower burning day and night. In high school we would drive around all these industrial zones and out in the country. It has a gnarly bleakness, but also a pretty magical vibe, like living in a vacuum. Great art museum, great fried pickles, amazing thunderstorms. Ive lived a lot of places after high school, Columbus, Seattle, San Francisco, Oakland, a 92 Mazda MPV, but Toledo is where I’m from. Now I live in Los Angeles. 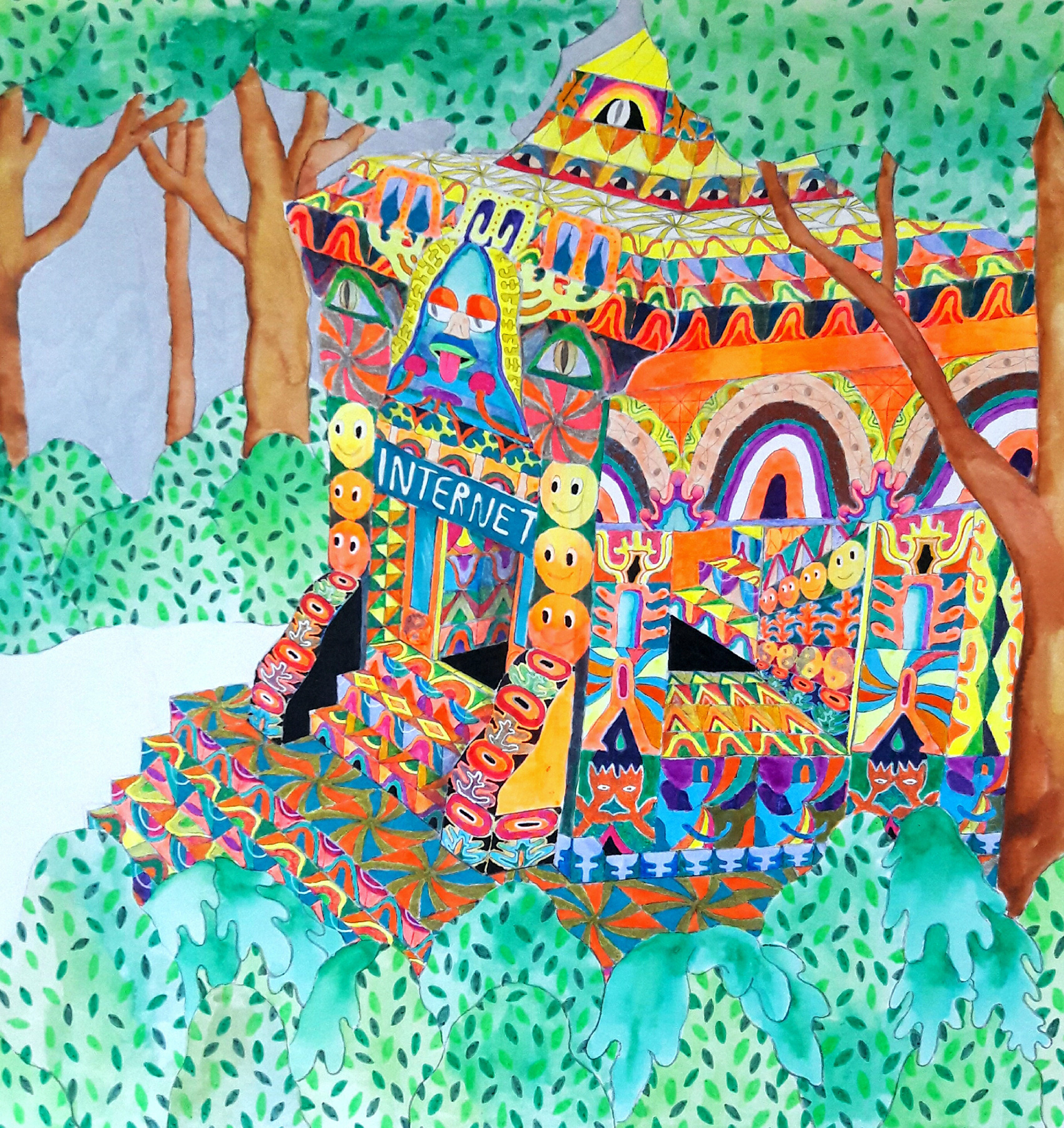 What would you say are some of your major influences?
I feel like I’ve been blessed with many image packed ceilings and walls, so just zoning and picking things out of them, or getting blasted on the back of the eyelids with stuff. Sometimes the pictures are already popping on the paper and it's just about tracing them.

The dream world is a major source. I’ve had episodes of sleep paralysis since I was a kid, so that whole realm really is of special interest. Becoming more lucid, more aware, gearing up for astral travel are probably what I spend the most focus on. I'm trying to be more consistent writing down my dreams, burning and drinking mugwort, smoking plenty of herb, trying to make connections, and really setting some intentions. I grab a lot of inspiration from there. 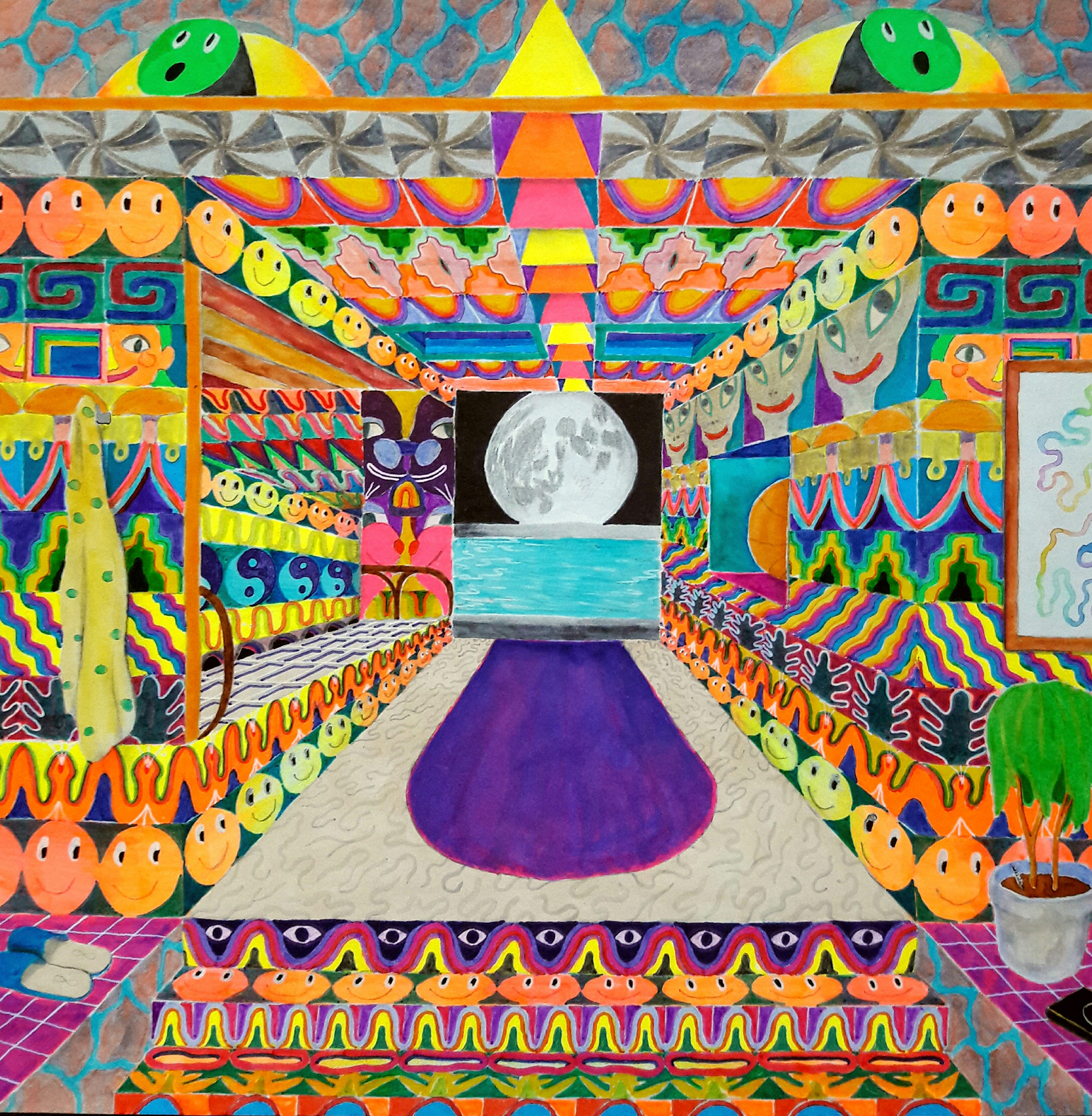 It seems not only is psychedelia an influence on your art but also cartoons, especially the 60s / early 90s? Would you possibly give some insight to this?
It would be a long list of cartoons from the Smurfs to Liquid Television. I was really into video games too but really, really into the little catalog that would come with some Atari games that showed all the game covers. Haunted House, Crystal Castles, Tower Toppler, Rainbow Island, all had some great art. I made my own catalog of made up games, mostly rip offs, but I’d draw out all the characters and levels. When that Super Mario 2 commercial first came out I lost my mind, I remember everything in that moment, it was like my moon landing. Zelda, Sonic, Boy and his Blob, Toejam and Earl, Shadowgate, Odd World, so good looking.

I owe a lot to my mom and grandma for taking me to so many garage sales. It was like their full time job so I’d just find a ton of shit. I had a huge bin of beat up comic books, like all kinds, some super far out stuff, especially for a kid, but they never censored much for me which I think was a special situation looking back. That's how I got into R. Crumb, D&D, and Heavy Metal magazine. 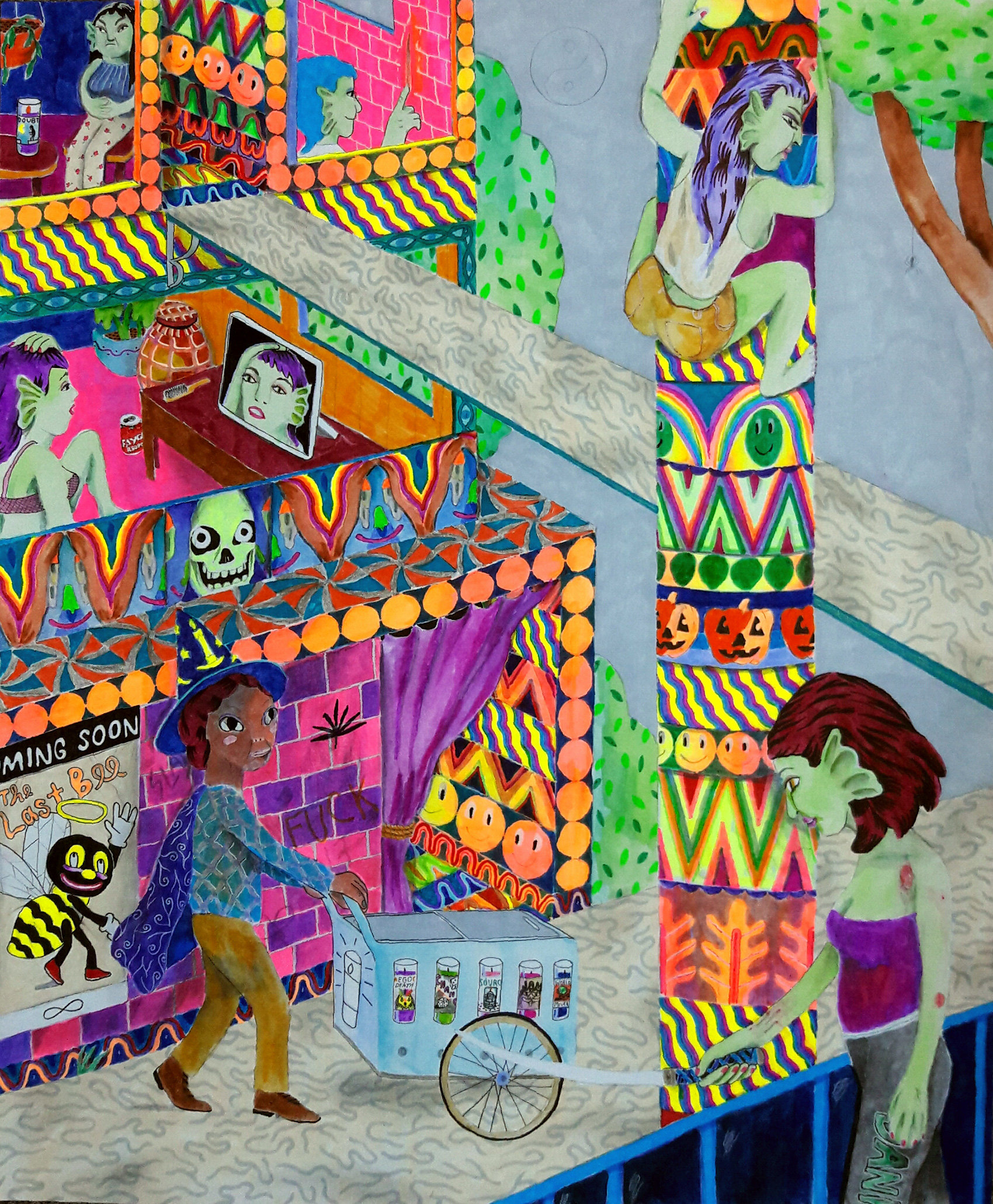 Would you consider your art a commentary on current pop culture?
It probably is in some way. Maybe more specifically on the "reality is an illusion" thing in pop culture, which itself seems so incredibly weird and mazey, mutating all over the place in every direction, too much going on to really to say much about it. I think reality is going to become so bizarre that you just have to surf the strangeness because nothing is going to make sense if you try to use your year 2016 or 2001 or 1995 brain. Everything is more liquid everyday. I guess thats why Im so attracted to things melting. That seems legit. We are in the Videodrome. All in all, I feel the truth remains the truth with just more disposable junk to dig through.

Any big plans for the future? Upcoming shows?
I've been working on a TV pilot called Zonkers Regional with a few friends. It's a green screen live action show with costumed people and puppets. Im making all the digital backgrounds and character design as well as co-writing and starring in it. It’s a soap opera in a park in a dream. I'm really excited about this, it looks insane.

Outside of that, I'm slowly working on a comic book and just putting together a body of work to do the next show. I ran out of drawings while driving around the country last summer. It was great but the future is going to be awesome. 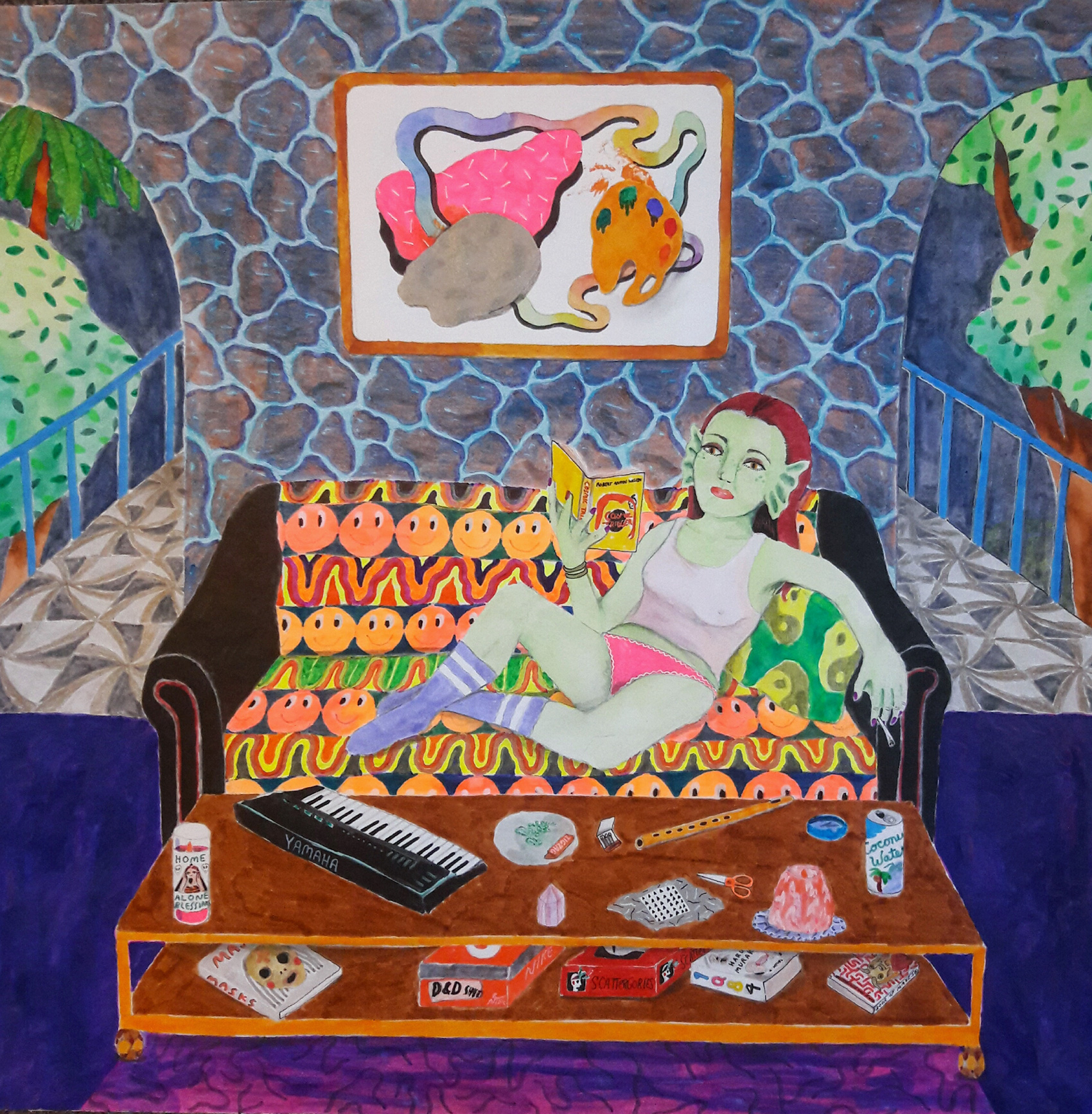 (In three words) How would you describe your art?
Dang Wayne Olsen

Do you have a favorite medium to work with?
Lately I’ve really been diggin markers and paper. I was obsessed with scratchboard for a few years but we’re taking a break from each other. I'm learning Unity now and that is the cat's pajamas. 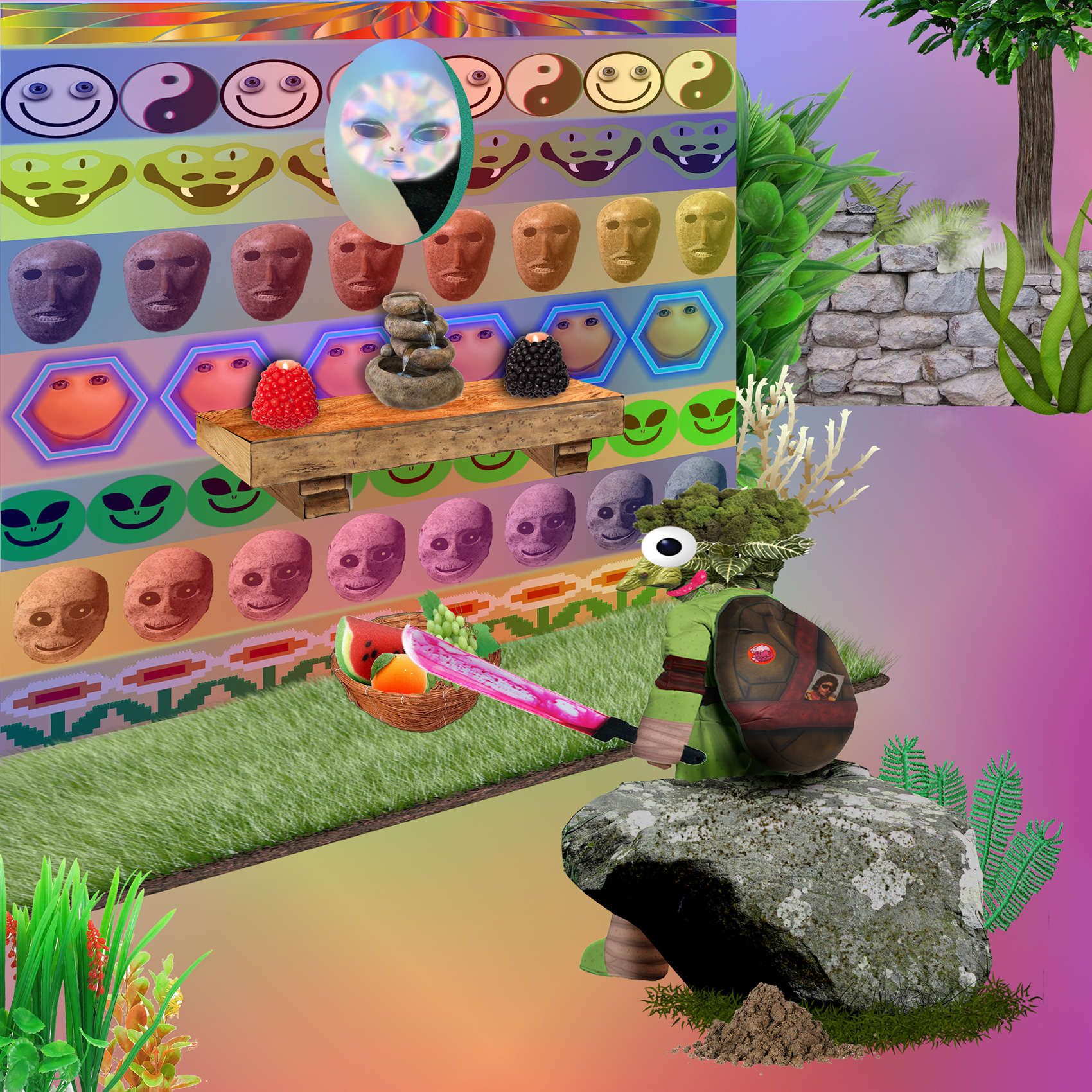 While looking through your website I found a lot of beautiful music, did you create all of that?
Thank you! Yeah I've been doing this project called Dang Olsen Dream Tape for a few years now. Whenever that feeling hits me I’ll usually do some binge recording sessions.

Do you come from a musical background? Or was this something you just decided to start doing?
Kind of sort of. I’ve been playing music since I was a kid, but never formally trained in any way. I played the bass in a lot of bands. I sang with a bunch of guys in an acapella grunge band called Rage Against the Cage. Those were great times.

I guess I started this Dream Tape thing because I wanted to have some non-agenda-ish music to fall asleep to. Then I just kept on making it to do yoga and draw with. Eventually it morphed into what is now, this kind of sleepy reggae trance. There's gonna be a new tape dropping very soon. 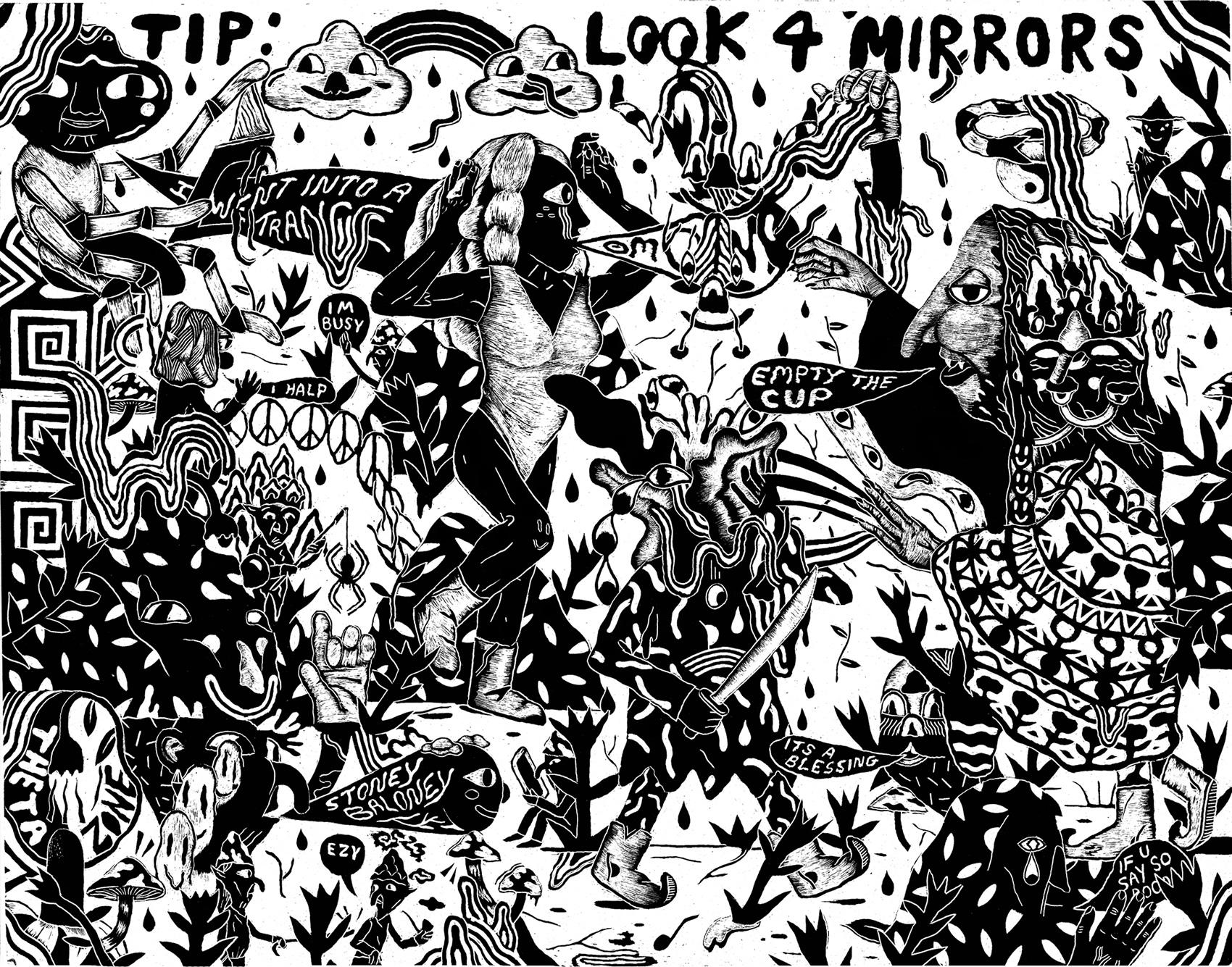 What’s you opinion on the influence of technology in the world of art?
VR is probably the future. I can see art and tech really merging beautifully in some form of ‘E-drug,’ or death / afterlife, or birth / pre-life simulation. There's just so much I don't know about that I just wish I knew more about, and I wish I was actively involved in. I think the work Brenna Murphy is doing is amazing and those non-games by Strangethink are pretty rad.

As far as connectivity and meeting people and sharing art instantly, yes, it's life changing and empowering 100%. The cheaper and more accessible tech gets I think the better the art that involves it is going to be. Avatar was cool but it's not Grandmaster Flash.

Saying all that, I’m kind of memed out. Can all information be essentialized into bagel bites? I don’t know, but I think some things are getting lost in translation. With all the instant accessibility, nobody has to dig for things anymore, and the digging is what makes our brains stronger, and gives us a deeper perspective, and it's the fun part. Maybe I’m stuck on hunter gatherer mode, but isn’t it all about the journey? When humans stopped and started planting crops they also had to plant walls and prisons. I also feel that a lot of art has become superficial and spiritually vapid because of the internet, and if life imitates art, welp, here we are today with fake news, and spray tans, and covfefe or whatever the fuck. 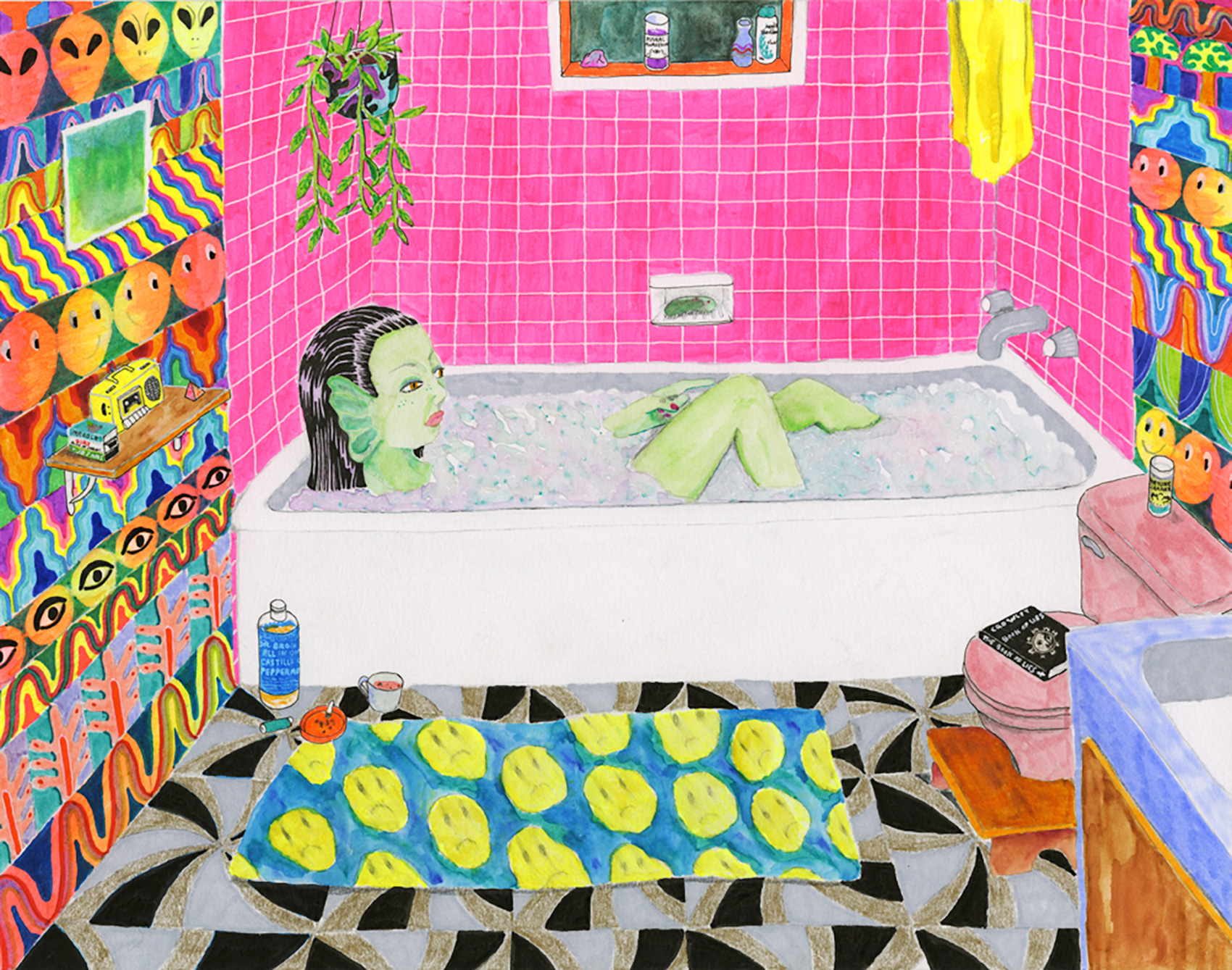 Would you say your digital art and your fine art are one and the same, or do they stand for different things?
Hmmm, not sure. They kind of weave in and out of each other but they live in separate worlds. Maybe they live in the same world? I’m finding out more and more everyday so let me get back to you on this one.