Baton Rouge Gallery is now accepting submissions for Surreal Salon 9, the national juried exhibition that highlights the growing quality and popularity of the pop-surrealist/lowbrow movement in American contemporary art

Baton Rouge Gallery – center for contemporary art has announced it is now accepting submissions for Surreal Salon 9, the national juried exhibition that highlights the growing quality and popularity of the pop-surrealist/lowbrow movement in American contemporary art. The exhibition will be juried by one of the most respected artists working within the pop-surrealism movement, Greg “Craola” Simkins. Artists interested in being a part of this unique and exciting exhibition can find more information here. 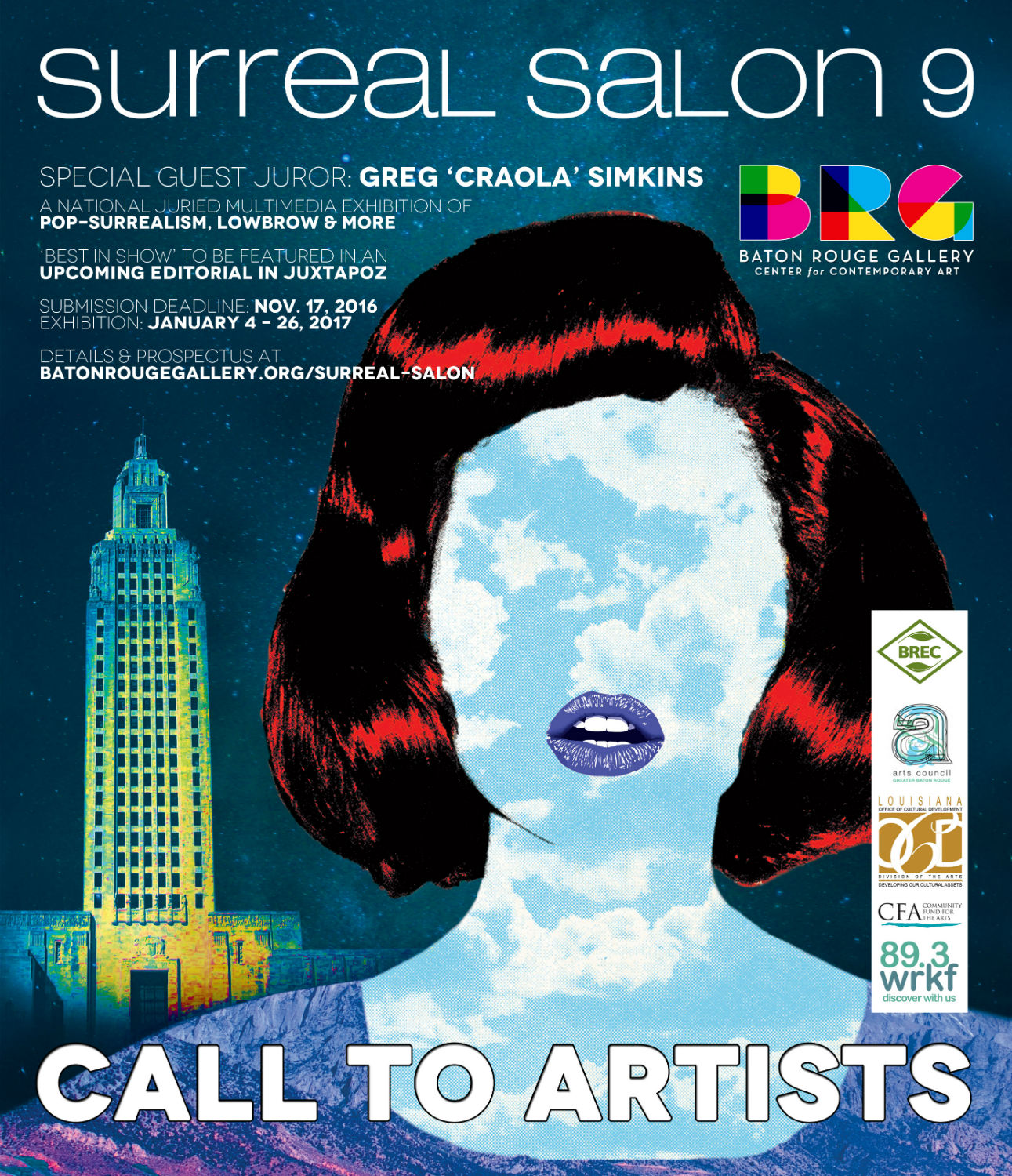 Surreal Salon 9 is aimed at once again engaging audiences in a multi-sensory art experience like no other in the region by highlighting the growing popularity and exceptional quality of the pop-surrealist/lowbrow movement. Submissions will be reviewed via a blind jurying process that will ensure that works are selected based solely on their artistic merit (the juror will not see an artist’s name until after selections for the exhibition have been made).

Over the years, Surreal Salon has enlisted well-known and well-respected jurors for Surreal Salon – including the co-founder of Juxtapoz Magazine, Greg Escalante and internationally-renowned artists such as Josh “Shag” Agle and Elizabeth McGrath - to assist in making Surreal Salon as artistically engaging as possible. That tradition is once again renewed with one the most respected artists in pop-surrealism today with Greg “Craola” Simkins serving as Special Guest Juror (thanks in part to a partnership with the Louisiana State University School of Art) and personally selecting each work to be included in the exhibition from the submissions received.

Simkins is a Los Angeles based artist who began drawing at the early age of three and was inspired by various cartoons and books. At the age of 18, Simkins started doing graffiti under the name “Craola.” Graffiti art became his impetus for creating and gave him the confidence to paint large works. In addition it taught him perspective, color theory and further developed his artistic skills, which later translated into his work with acrylics. It is his careful weaving of pop culture, the old masters, nature, carnival kitsch, and (most importantly) his warped imagination, that makes Greg "Craola" Simkins a sought-after surrealist painter today. Simkins’ artwork has appeared in museums and galleries throughout the world.

Simkins will also speak at Louisiana State University on Monday, January 23, 2017, discussing topics such as his own work and career as well as the process of selecting the works for Surreal Salon 9. This event will be free for all to attend.

Over the past seven years, BRG has been proud to feature the work of over 145 artists from more than 30 different states as part of Surreal Salon. The gallery invites artists, regardless of the media they work in, to review the prospectus for Surreal Salon 9 and submit up to three works for the show’s juror to consider for inclusion.

This exhibition will be held from January 4 - 26, 2017 at BRG (located inside the Recreation and Park Commission of East Baton Rouge Parish’s (“BREC”) historic City Park (1515 Dalrymple Dr.)