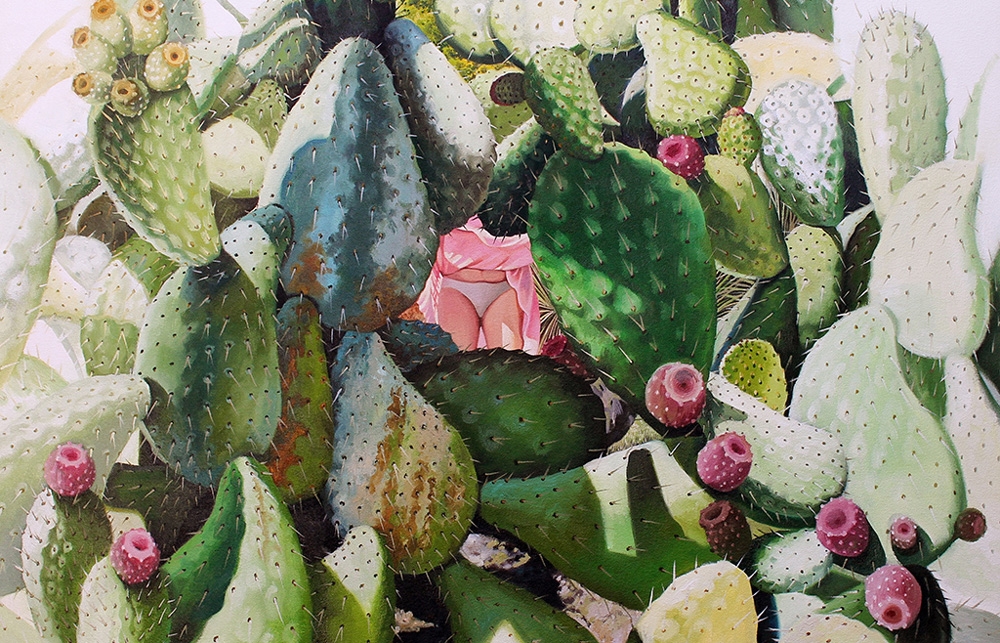 Spoke Art is opening their latest show, NSFW, this month in San Francisco. The show features over 40 female and femme-identifying artists each interpreting sexuality and the conversation around sexuality in their own ways, spanning the spectrum of gender identity, sexual orientation, nationality, and racial background. Below is an interview with curator Dasha Matsuura.

Spoke Art is opening their latest show, NSFW, this month in San Francisco. The show features over 40 female and femme-identifying artists each interpreting sexuality and the conversation around sexuality in their own ways, spanning the spectrum of gender identity, sexual orientation, nationality, and racial background. Below is an interview with curator Dasha Matsuura.

How did you first conceptualize this exhibition? I’ve wanted to do this show for a long time and am so thrilled to get to get to bring it to life. There is a particular sensibility when women use themselves, each other and their own experiences in their work that I’ve always been drawn to. I think there is an inherent complexity and acknowledgment of those facets that come with femininity that presents itself in the work. 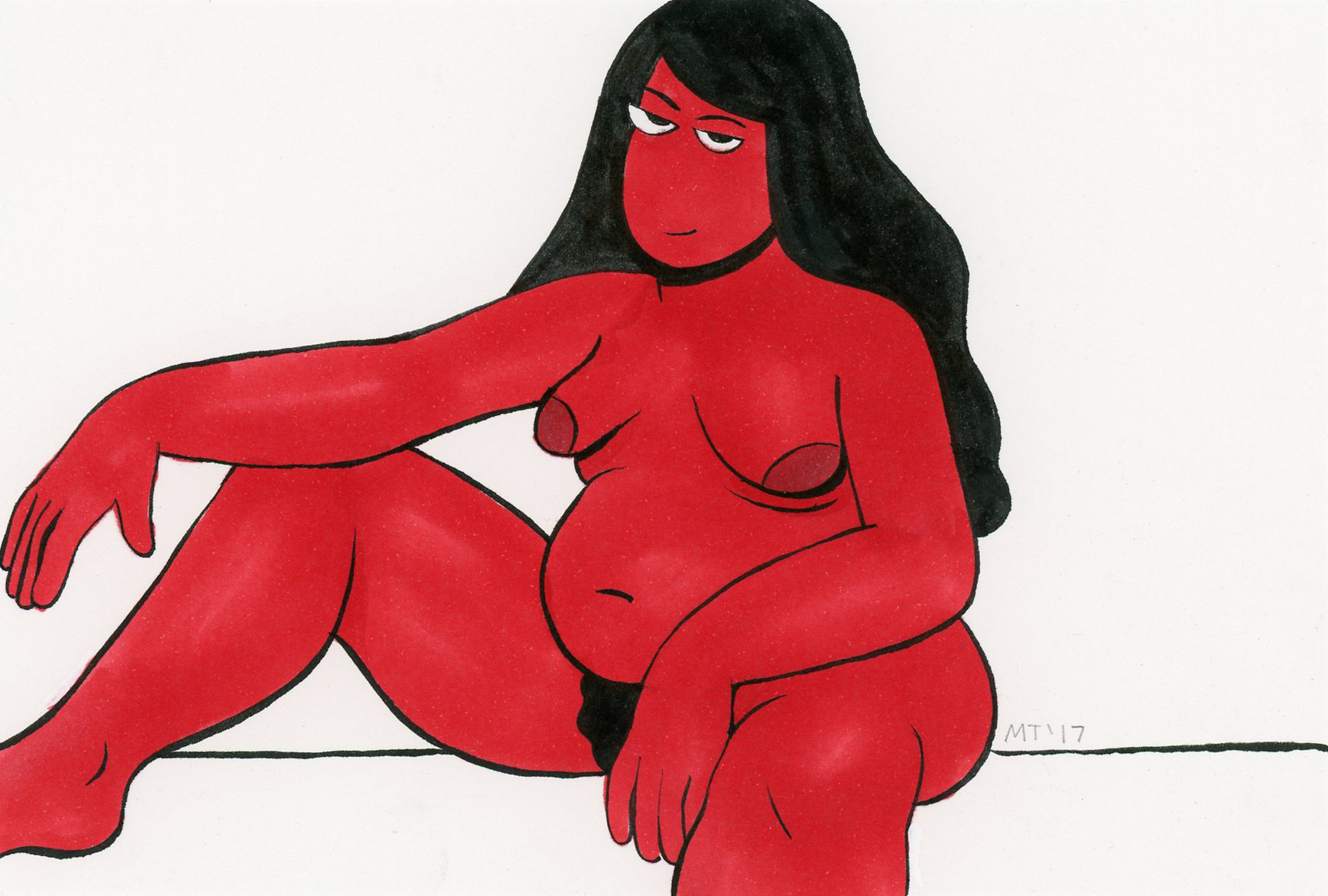 As a curator, what is your artist selection like? Was there something specific you were looking for?
There are a lot of artists in this show that I’ve been following for a while and have been waiting for the right opportunity show their work, so there are a lot of new faces in the show for Spoke. We’ve also featured a number of our regularly exhibiting artists, so it was exciting to challenge them to work on something different than they usually do. I’m really excited to get to work with each of these artists and it’s been really thrilling seeing what they’ve made.

When I was looking at different artists to put in the show, I really wanted the exhibition to feel like a conversation with as many varying perspectives on what it means to be a sexual being and femme or female. It was important to me to include as many voices on the spectrum of what it means to be feminine and how different artists identify with that experience within their work.

There are so many phenomenally talented artists working with sex and sexuality, I think I could fill about five times the space with more work. 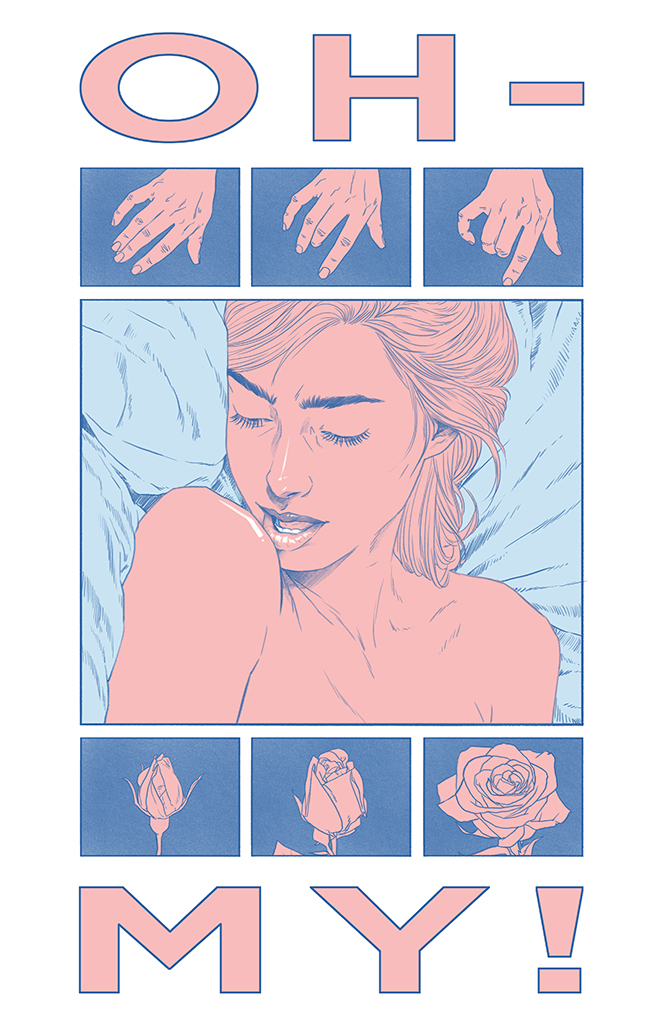 Can you highlight a few of the artists featured in the show? What can we expect from NSFW?
I’m so thrilled and honored to work with everyone in the show. A few standouts to me, that’s really hard. Miranda Tacchia’s series is incredible. The characters in her work are so many things - relatable, funny, poignant, sexy, direct, powerful, vulnerable - and I think the work really embodies so much of what make the female/femme identity so fascinating. One of her pieces for the show is my desktop at the moment.

I grew up with a fascination with the Playboy Femlin of the 50’s and 60’s and Neryl Walker’s work is a wonderful, modern continuation of that spirit in a lot of ways for me.

I love the feral quality that a lot of the artists incorporated into their pieces for the show like Nomi Chi and Nadezda. Then there are these incredibly sweet and intimate pieces like Mel Stringer’s and Mandy Tsung. The overall contrast and complexity of sexual experience and identity from all the artists is amazing.

Why did you choose to focus on female / femme identifying artists?
In the beginning iterations of what this show could have potentially taken shape into, I had started jotting down names of artists I liked that were working with the idea of sex and sexuality. I realized that 99% of the artists on the list were women or femme identifying. I think it goes back to to how femininity is depicted by the feminine. The artists’ experience is in the work and for me it makes it that much stronger. There’s a sense of concurrent, opposing forces in the work and where the work is coming from that I think is so much a part of the female experience. The push and pull of being soft and hard, delicate and strong, funny or light-hearted and serious, etc. that we experience internally and from what the world around us would like us to be. That imbued sensibility was ultimately the deciding factor. 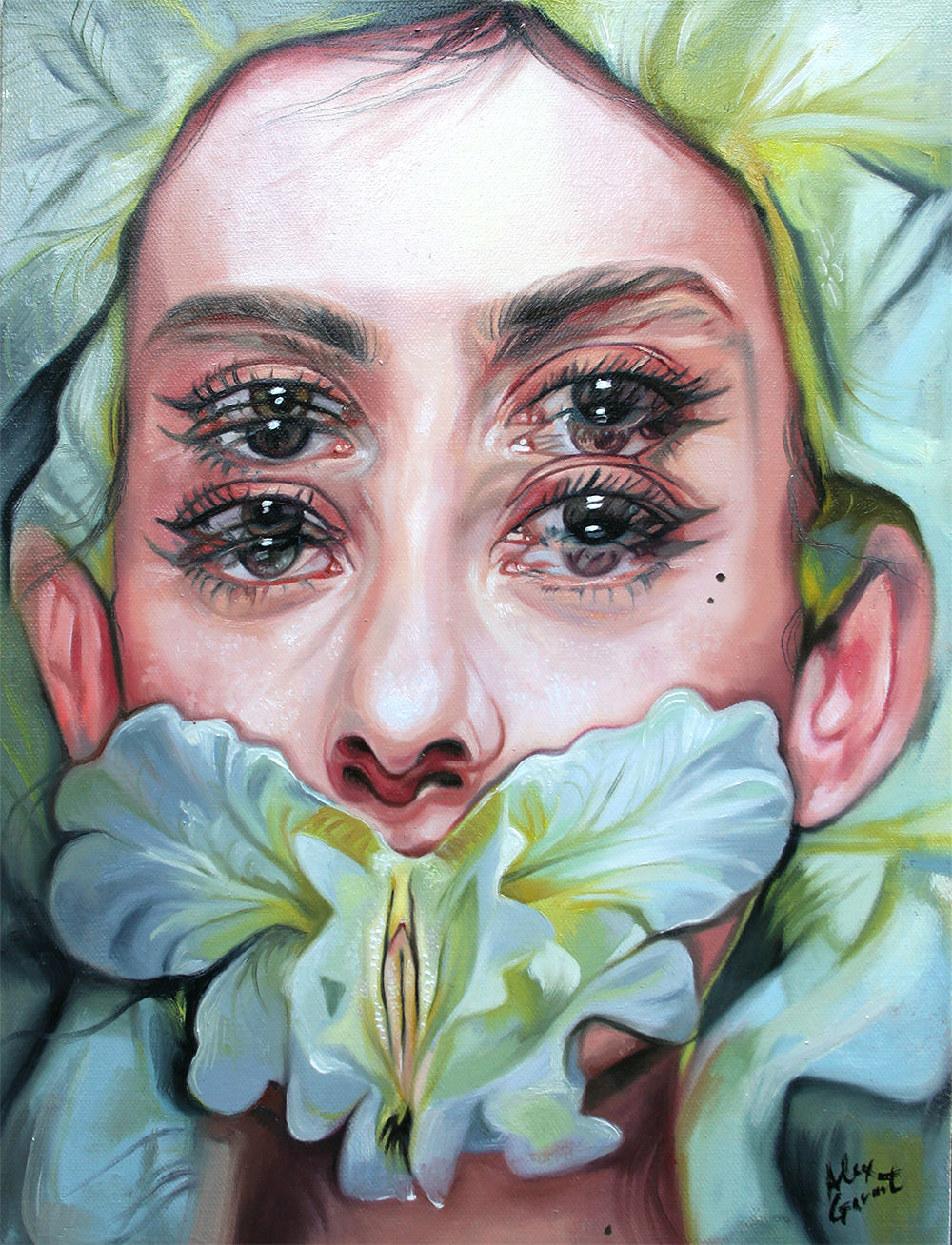 There is a broad range of work in the show, featuring anything from illustration to embroidery. What interests you about exhibiting varying mediums together?
It was interesting putting together this show for Spoke specifically and considering the overall programming and my own taste and marrying the two. Some of the new artists expand into mediums that are not usually featured in our normal programming, so it’s been excited to see the different works in conversation.

There are a lot of textile based and embroidery artists in the show. It’s a medium that I’ve always been drawn to and the combination of the tactile medium choice with the subject matter is particularly enticing. They’re taking a very gendered and craft labeled medium and creating compelling contemporary work.

How do you think this show comments on the cultural taboos placed on female sexuality?
It is an interesting time to make work in so many ways. There’s this amazing swell of space to talk about feminine sexuality, which is so important to this fraught political climate. I find the overall low tolerance for bullshit in the art community inspiring. The ability to speak openly about sex and sexuality especially where it concerns women and having autonomy to express themselves has an inherent taboo in most cultures and having a distinct platform to discuss that through art is critical.

There have been some really fantastic shows in the last year or so that are also giving space to talk about female sexuality, including coincidentally a show with the Creators Project by the same name in New York. It’s been really amazing to see so many talented artists given the opportunity to contribute to the overall discussion.

The title of the show reflects how sexuality isn’t deemed “safe” or suitable for proper or professional spaces and that sex and nudity should be censored or labeled. Though, the labeling convention actually can subvert the original intention and help people zero in on the sexual and more readily seek it out. 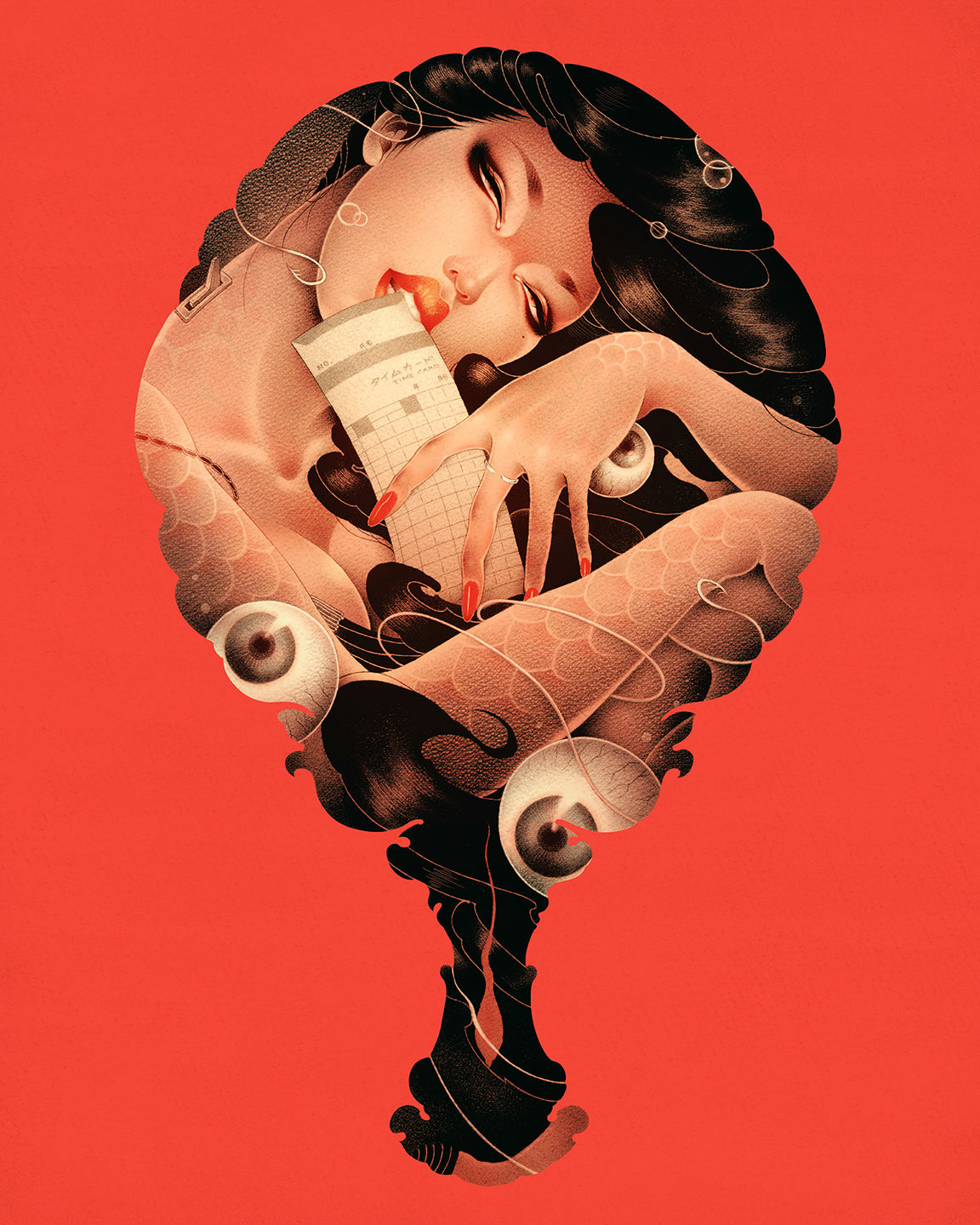 What do you hope this show communicates to its larger audience?
The endlessly broad spectrum of how women identify with themselves and their sexuality. And hopefully to inspire more people to embrace and celebrate everything that comes with being feminine.