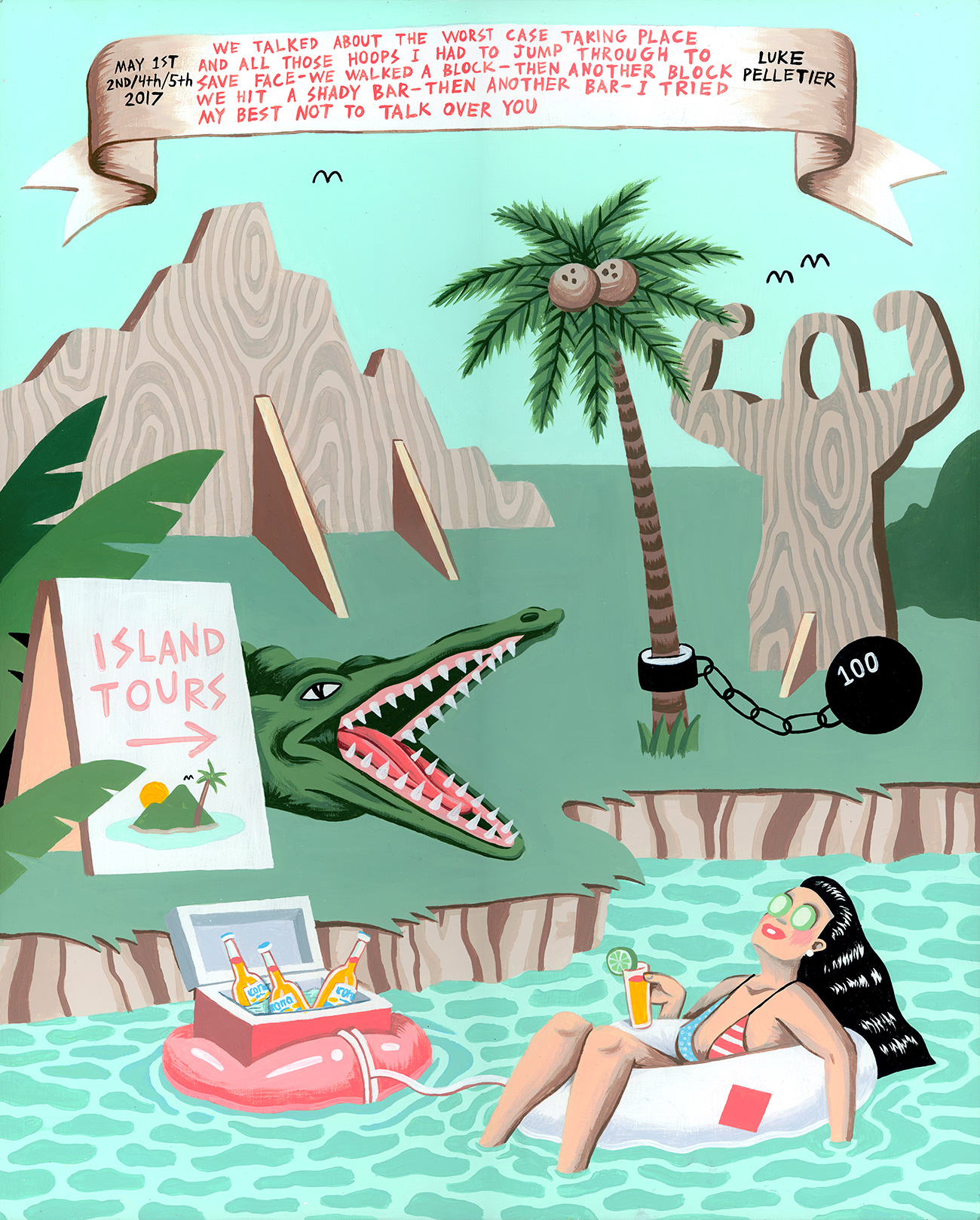 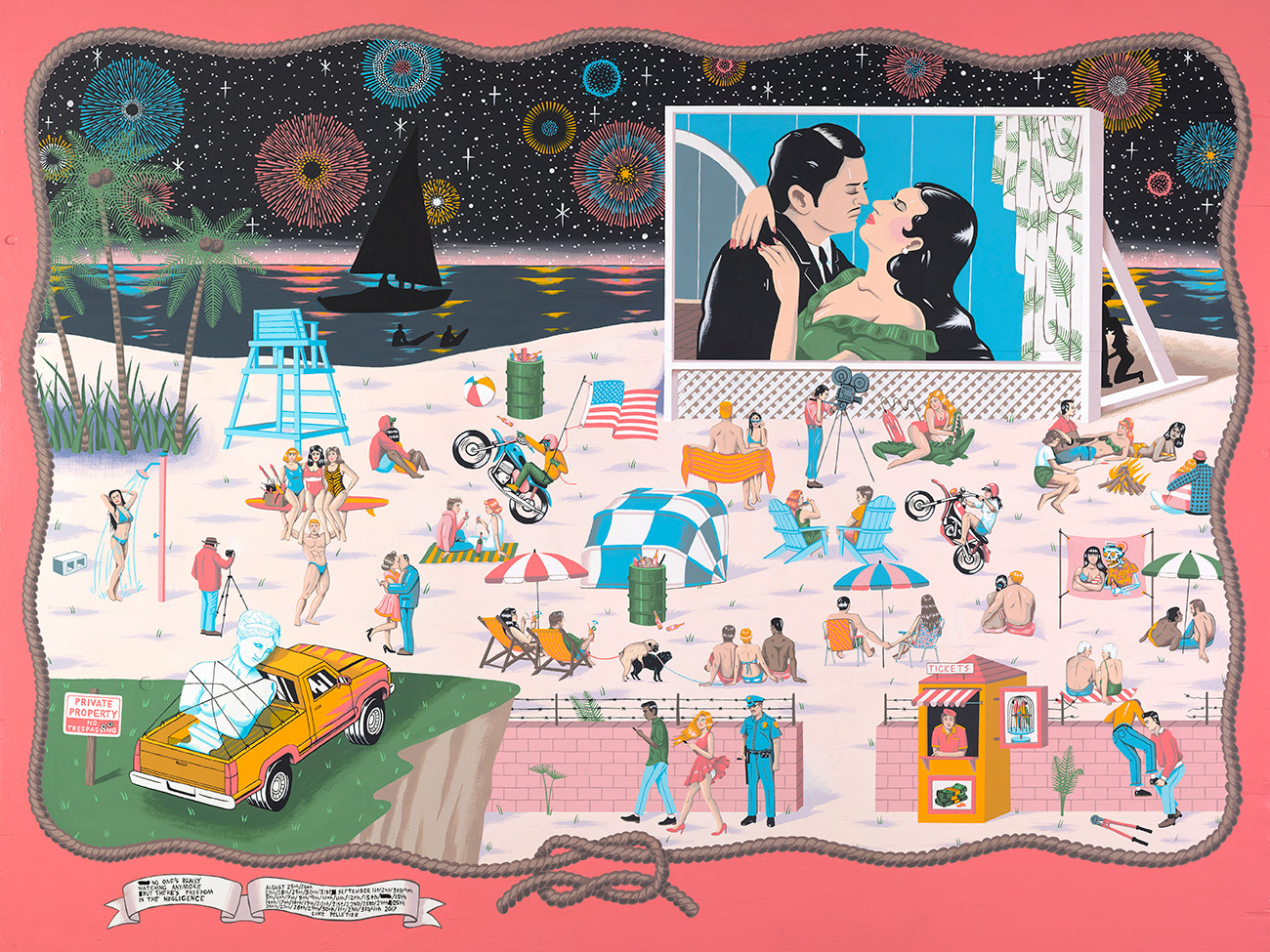 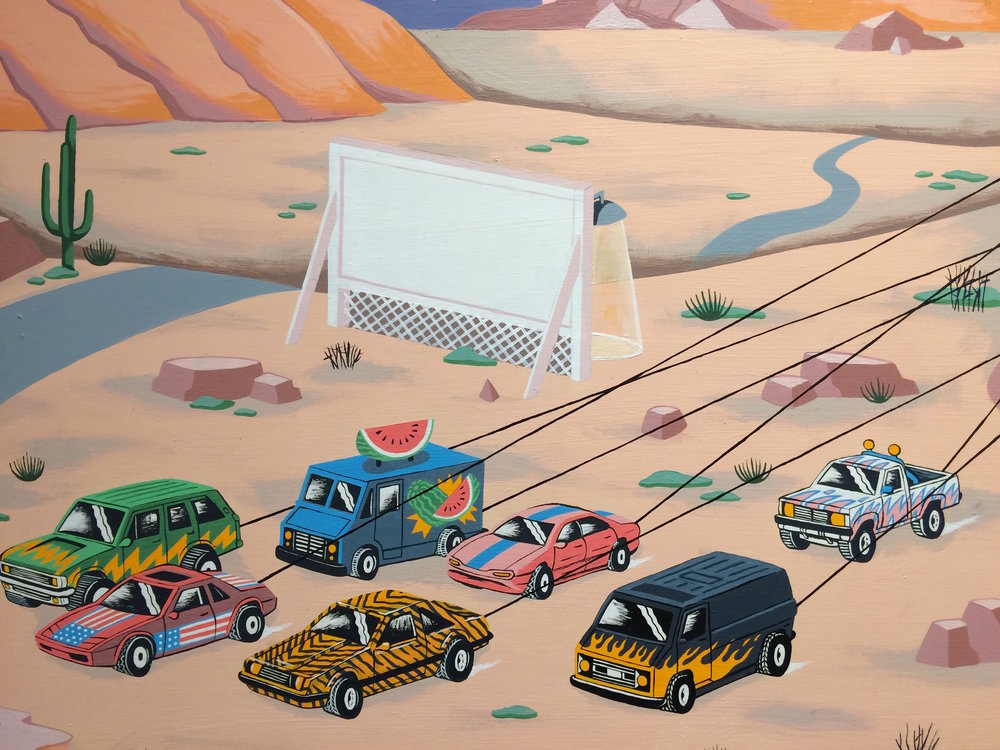 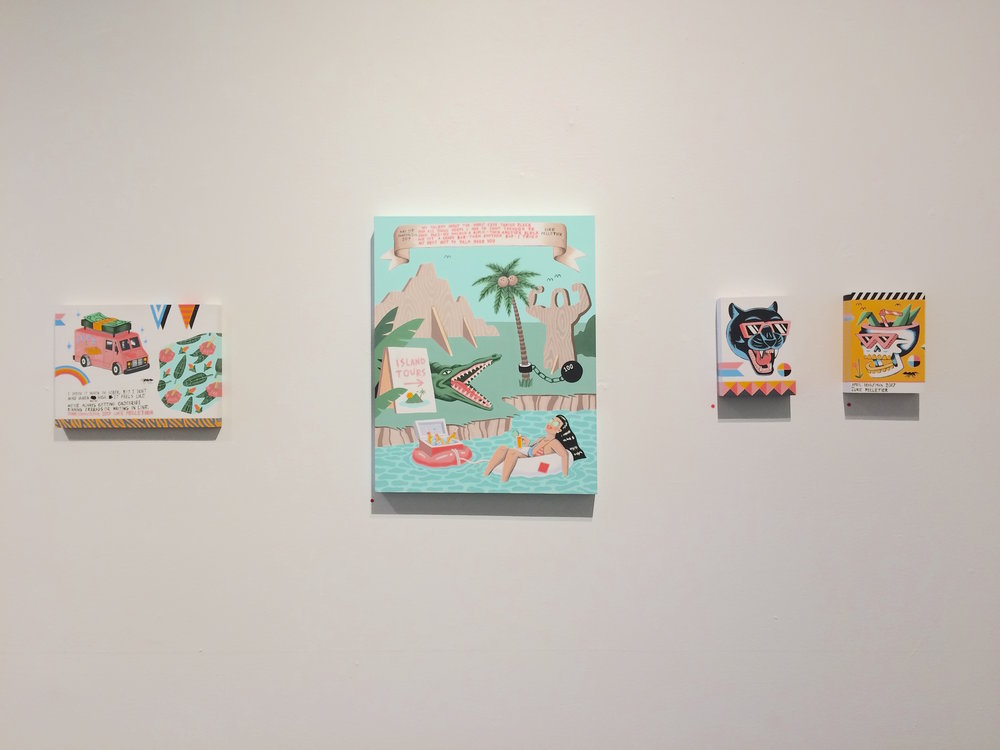 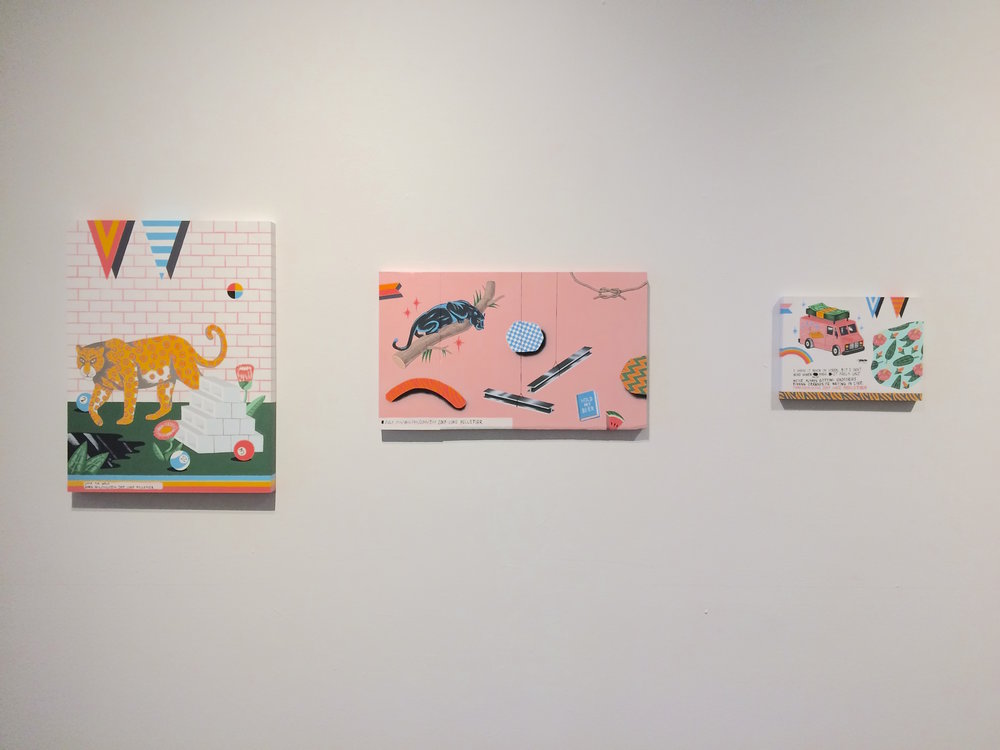 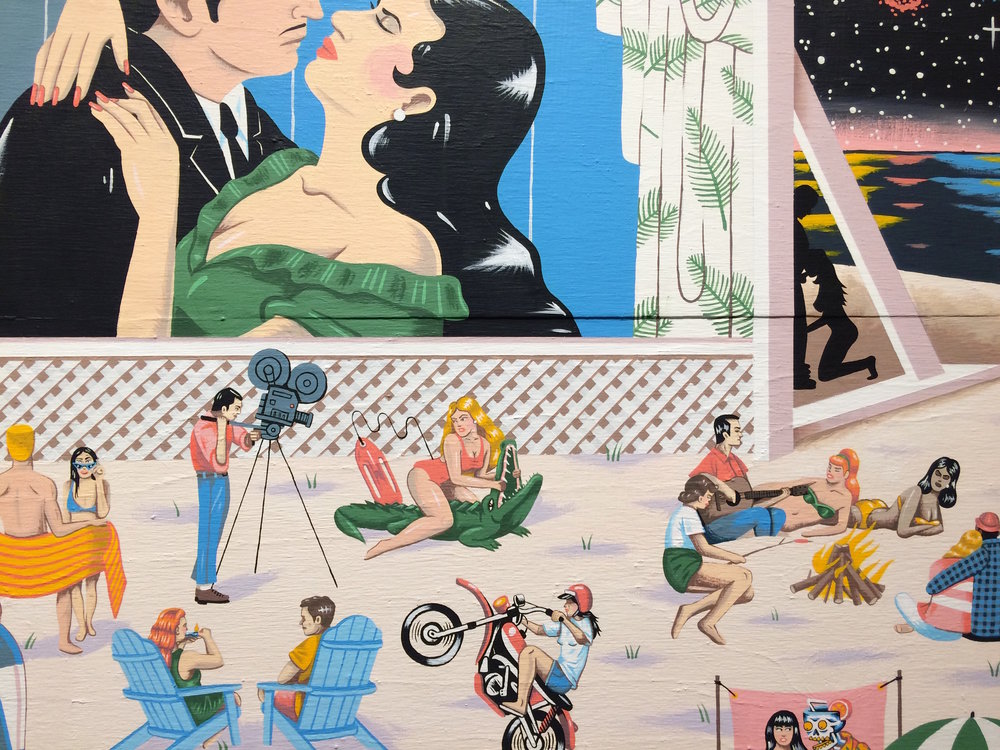 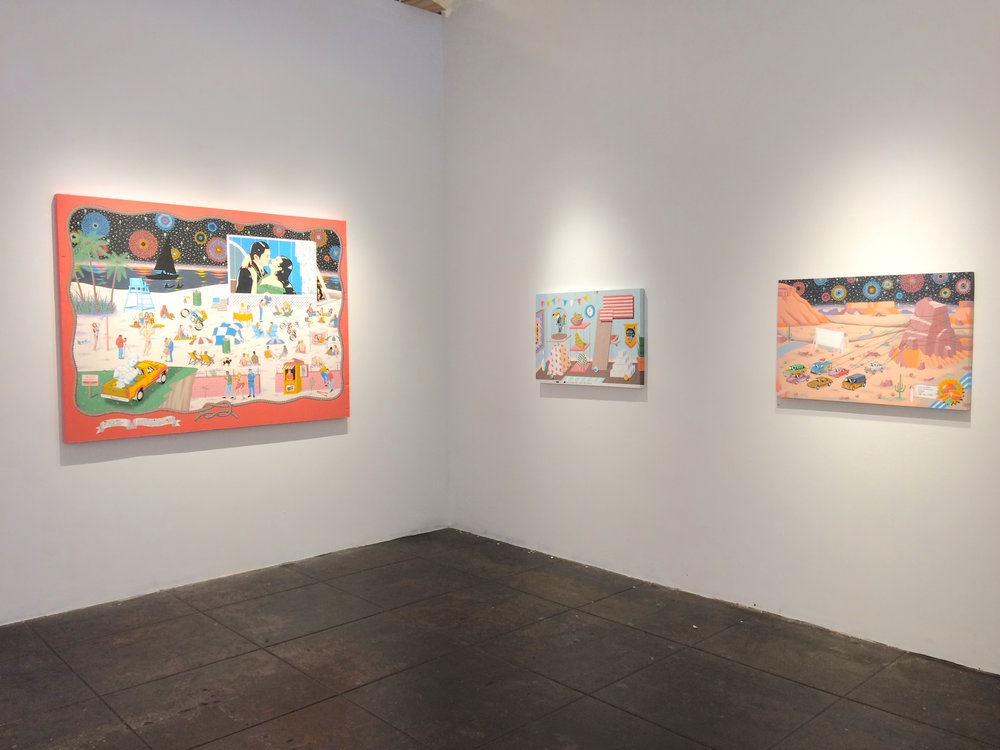 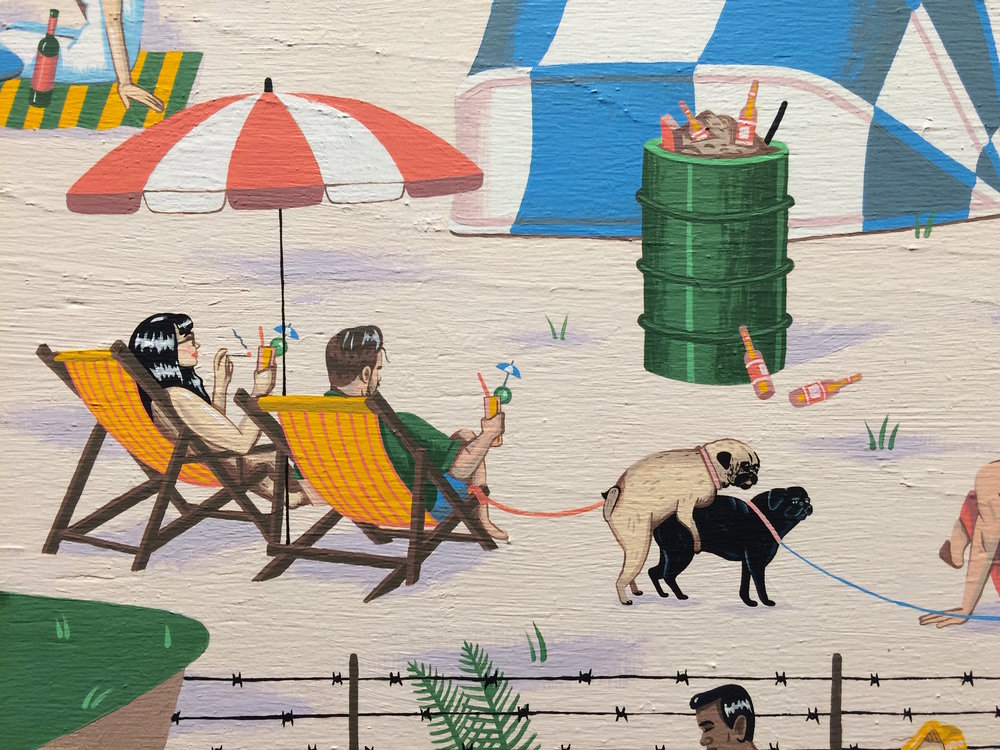 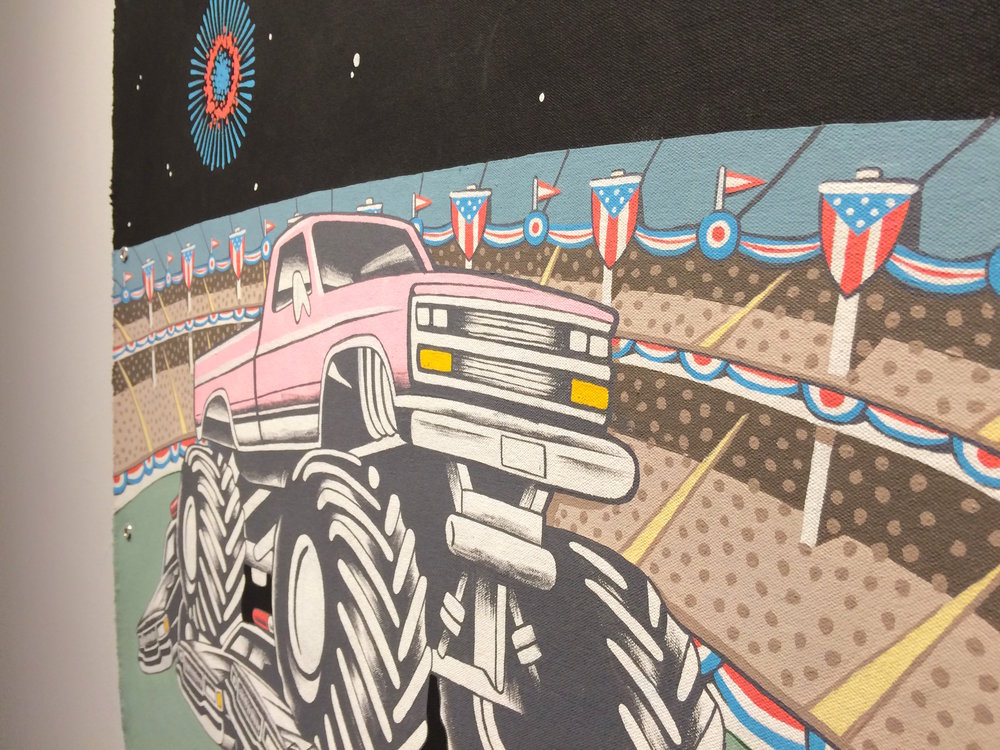 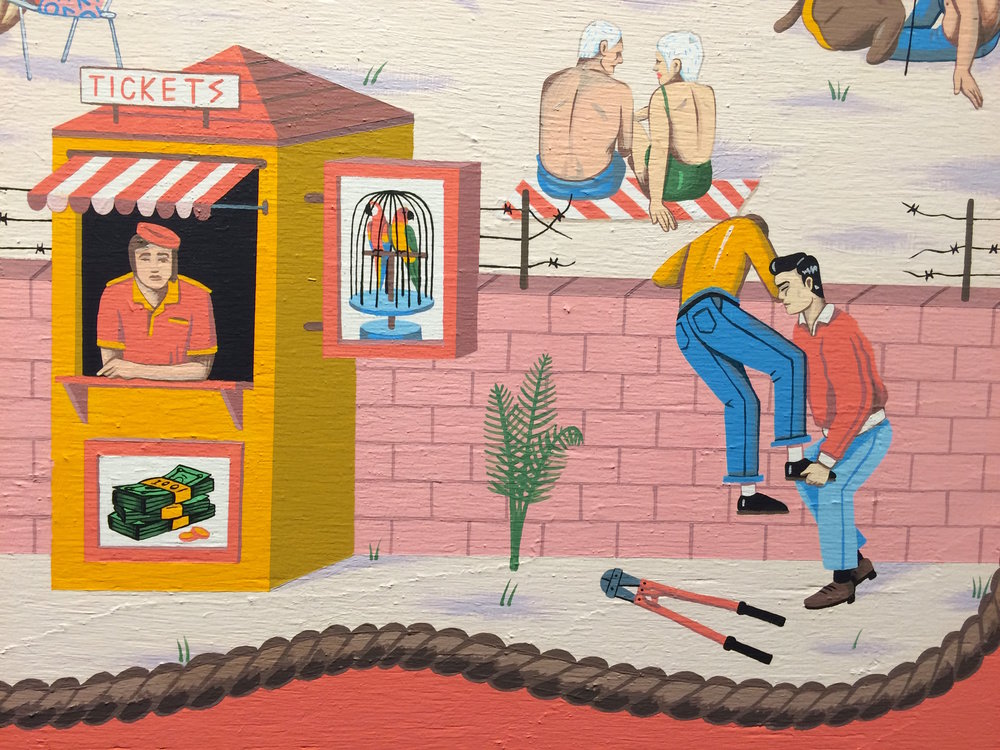 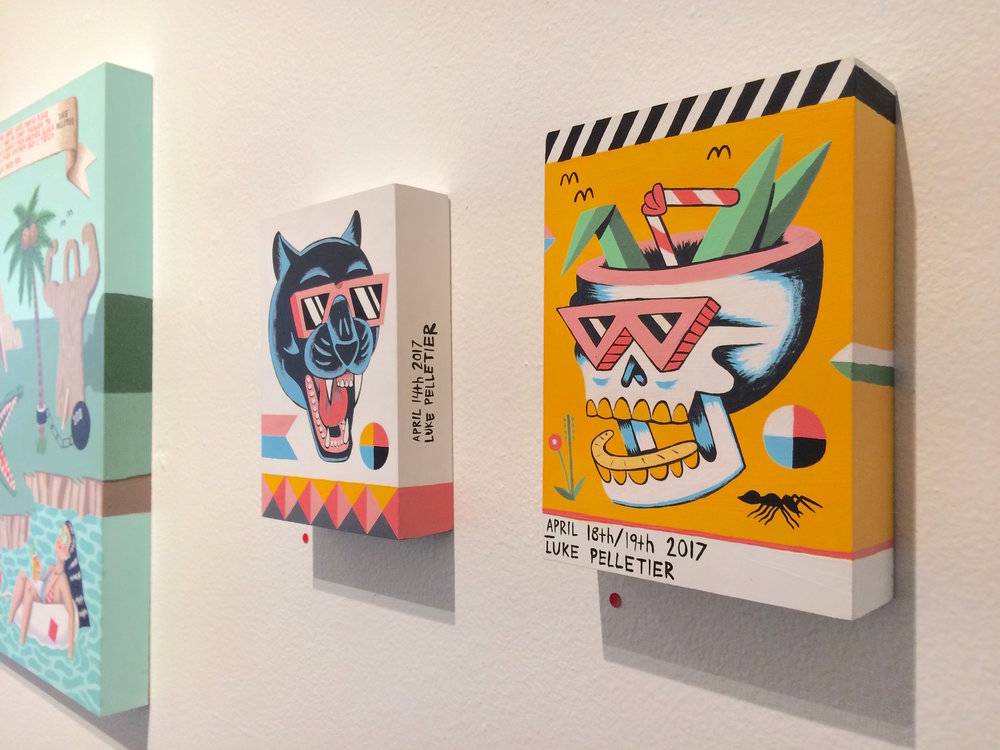 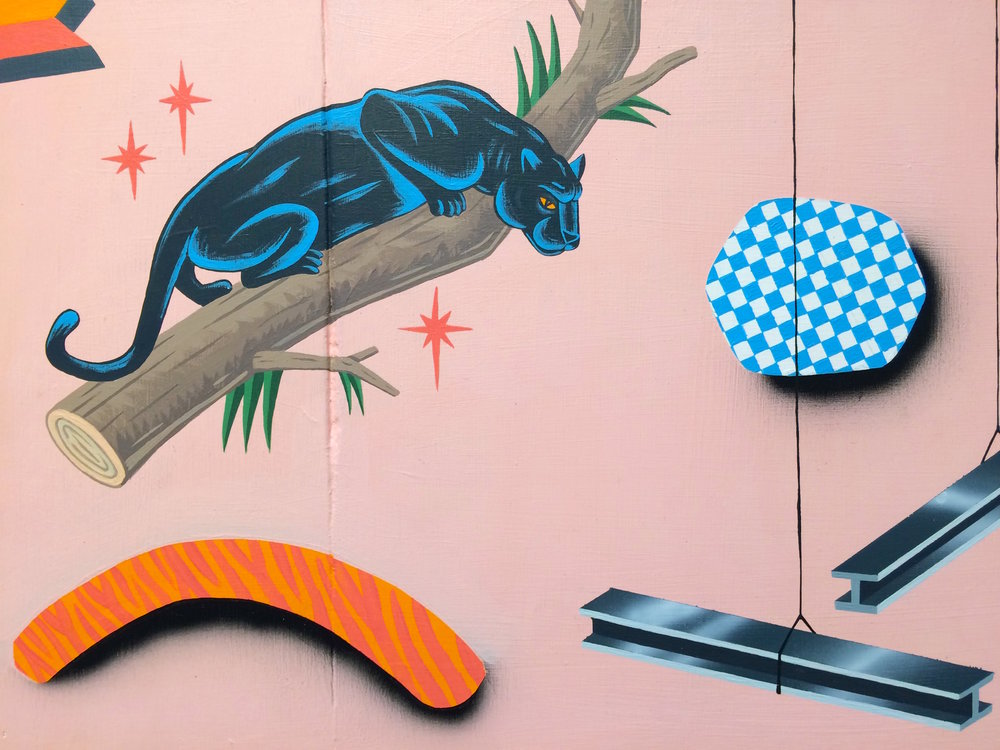 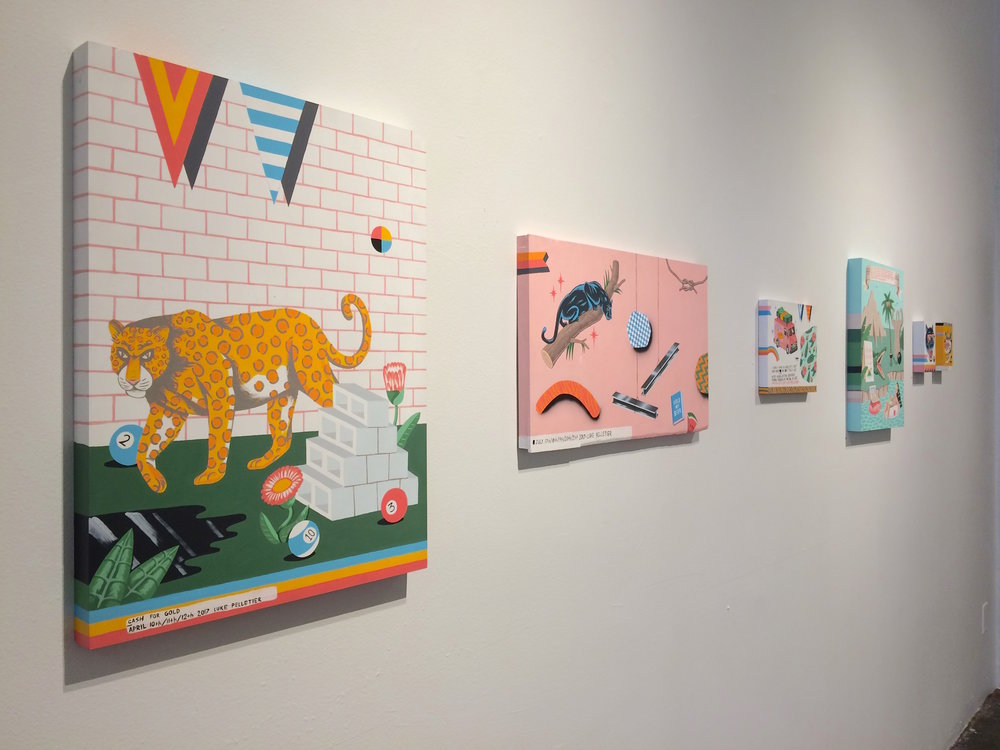 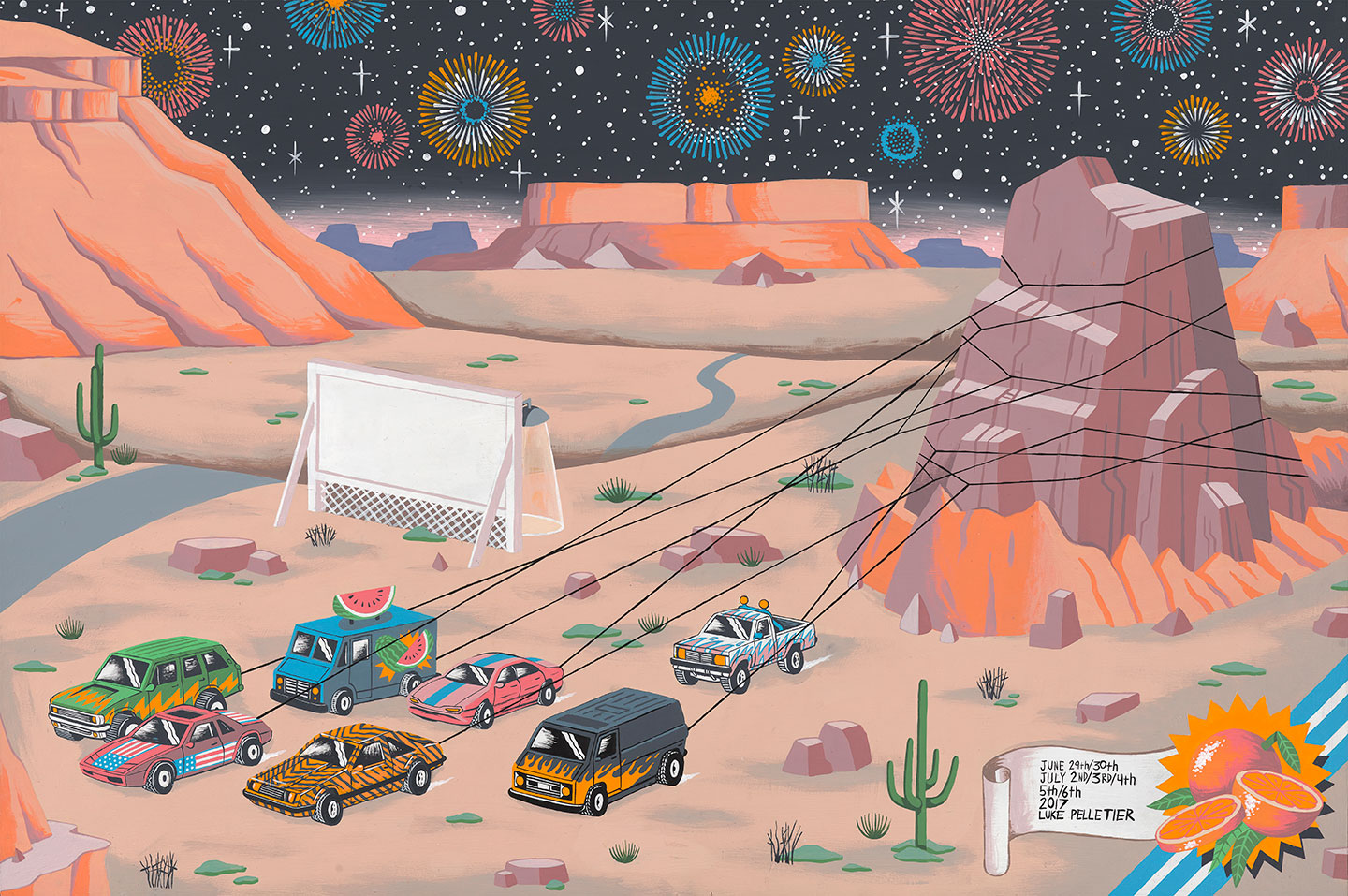 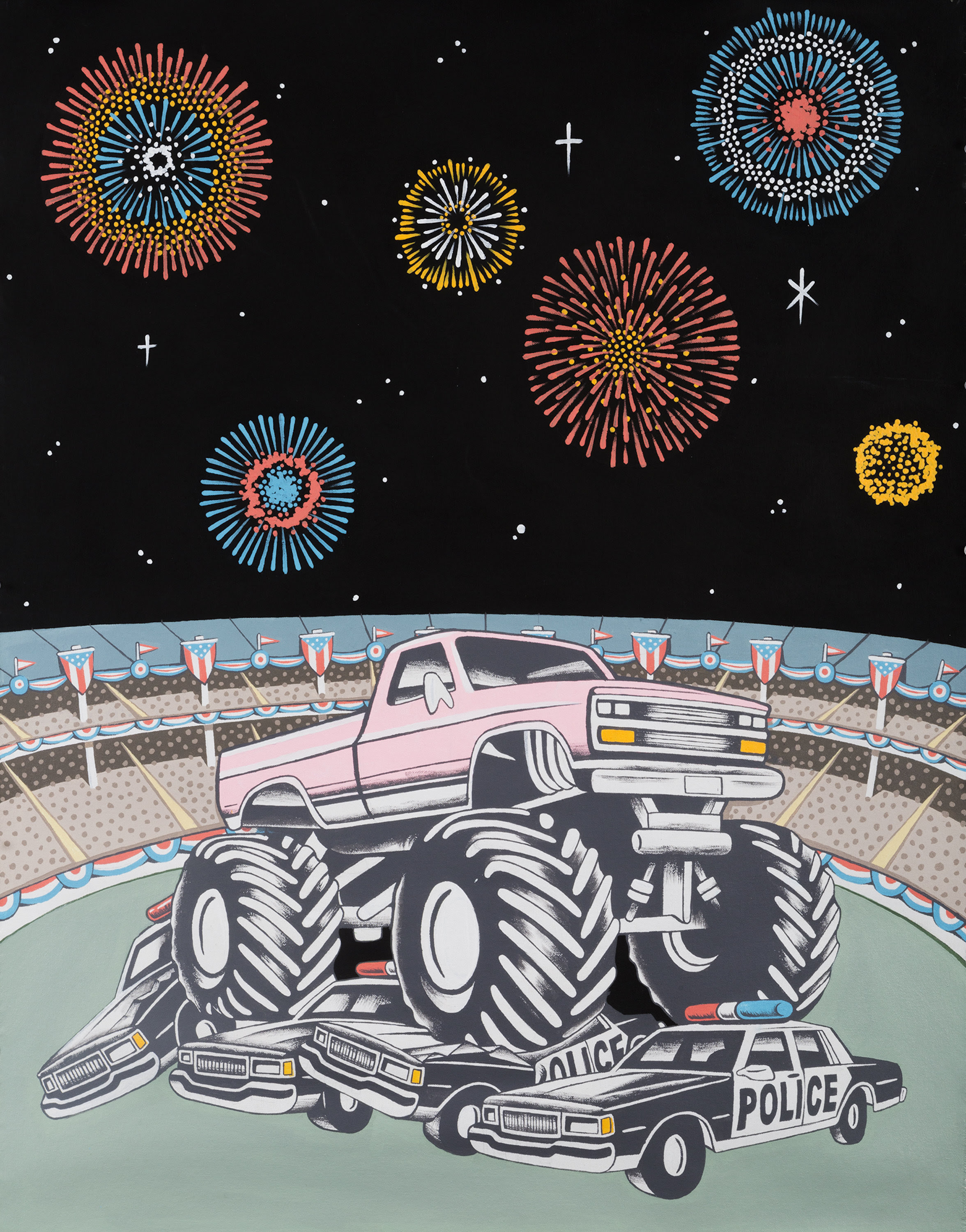 "I’ve wanted to live in Los Angeles for as long as I can remember," Luke Pelletier told us in our Winter 2018 issue. "A lot of that came from being into punk and skateboarding because that’s where all my favorite bands and skaters were, but I had no reference for it other than what I saw in movies. So I always had this picture in my head of what the city was like. Most of that came from Beverly Hills Cop, Dogtown And Z-Boys, Fast Times At Ridgemont High, Boyz In The Hood, and Crocodile Dundee 3. But it’s been a lot more like a cross between Less Than Zero and an episode of The Beverly Hillbillies."

In a lot of ways, this could be the perfect summation of Luke's newest show, American Fizzle, currently on view at New Image Art in Los Angeles (alongside a curated by Luke, Now A Whole Lot Going On). Raised in rural North Carolina but now living in Los Angeles, the bulk of this work feels like melting pot of Americana in a way that is both nostalgic and in many ways, a very acute and aware misrepresentation of America. In just the ways Luke describes his move to LA in the quote above, each painting he make for the show plays like an advertisement for each Hollywood fable they have sold us on the American landscape. Fireworks and monster trucks, Gone With the Wind and motorbikes. Dramatic and ironic, melodramatic and shallow. It's all their, like a perfectly constructed movie poster.

As the gallery notes, "As a 2nd generation blacksmith, Luke’s interest in craft can be seen in his hand forged railroad-tie and rasp knives made in his father’s shop. The paintings featured in “American Fizzle” are decidedly and unapologetically American as referenced by their content, primary color palette, and installation presentation."

"It’s a trip out here," Luke says of LA. "There are palm trees everywhere so it feels like you’re always on vacation. People smoke weed outside of bars like they’re smoking cigarettes. Everywhere you go, it’s like having déjà vu because you’ve been there before in some movie you can’t recall." If you look at his paintings, they function very much on this mirage of living at the edge of the Pacific, with the backdrop of Hollywood and the fantasy of life as a vacation. The exhibition runs through March 10, 2018. Make sure to check it out.