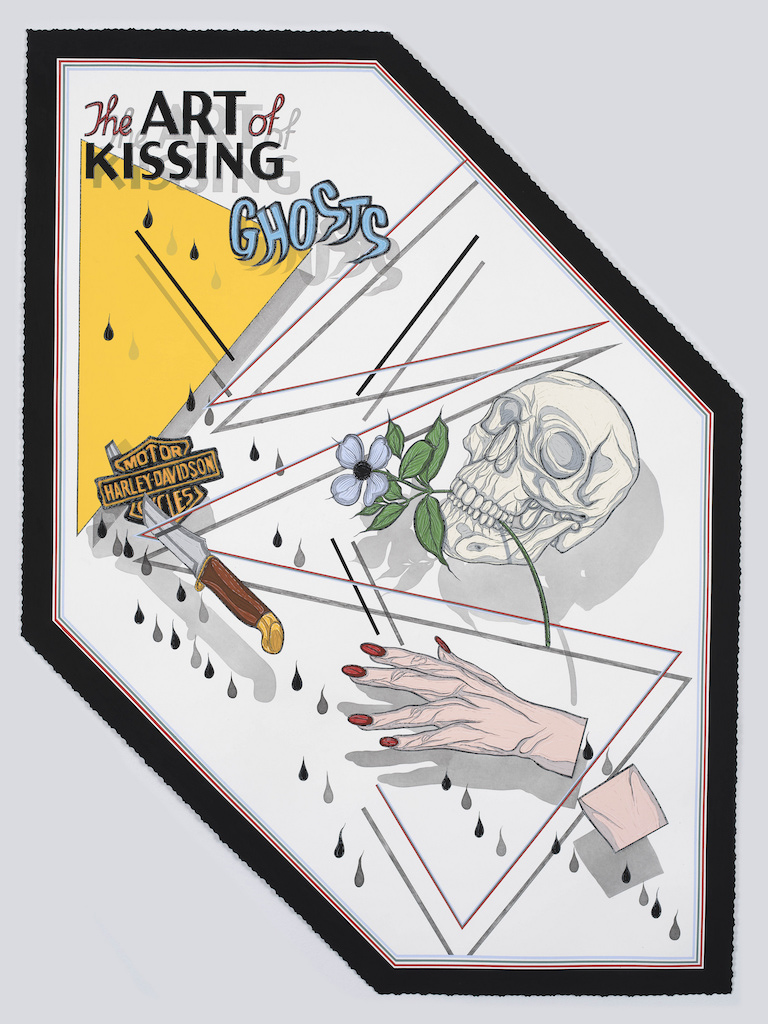 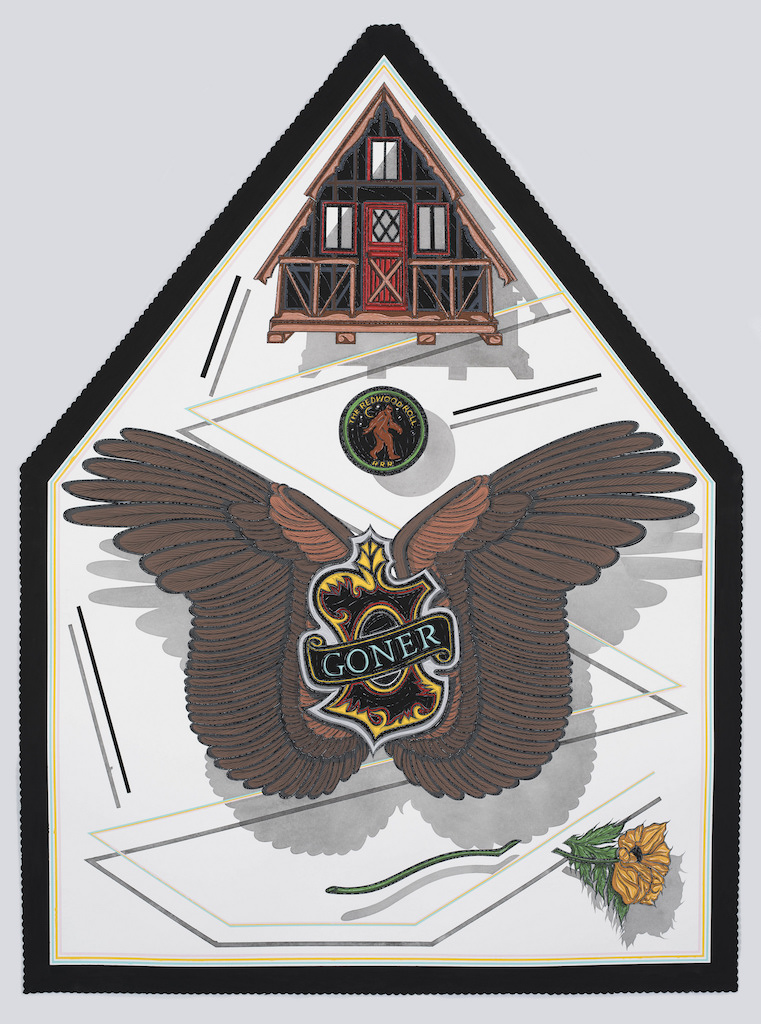 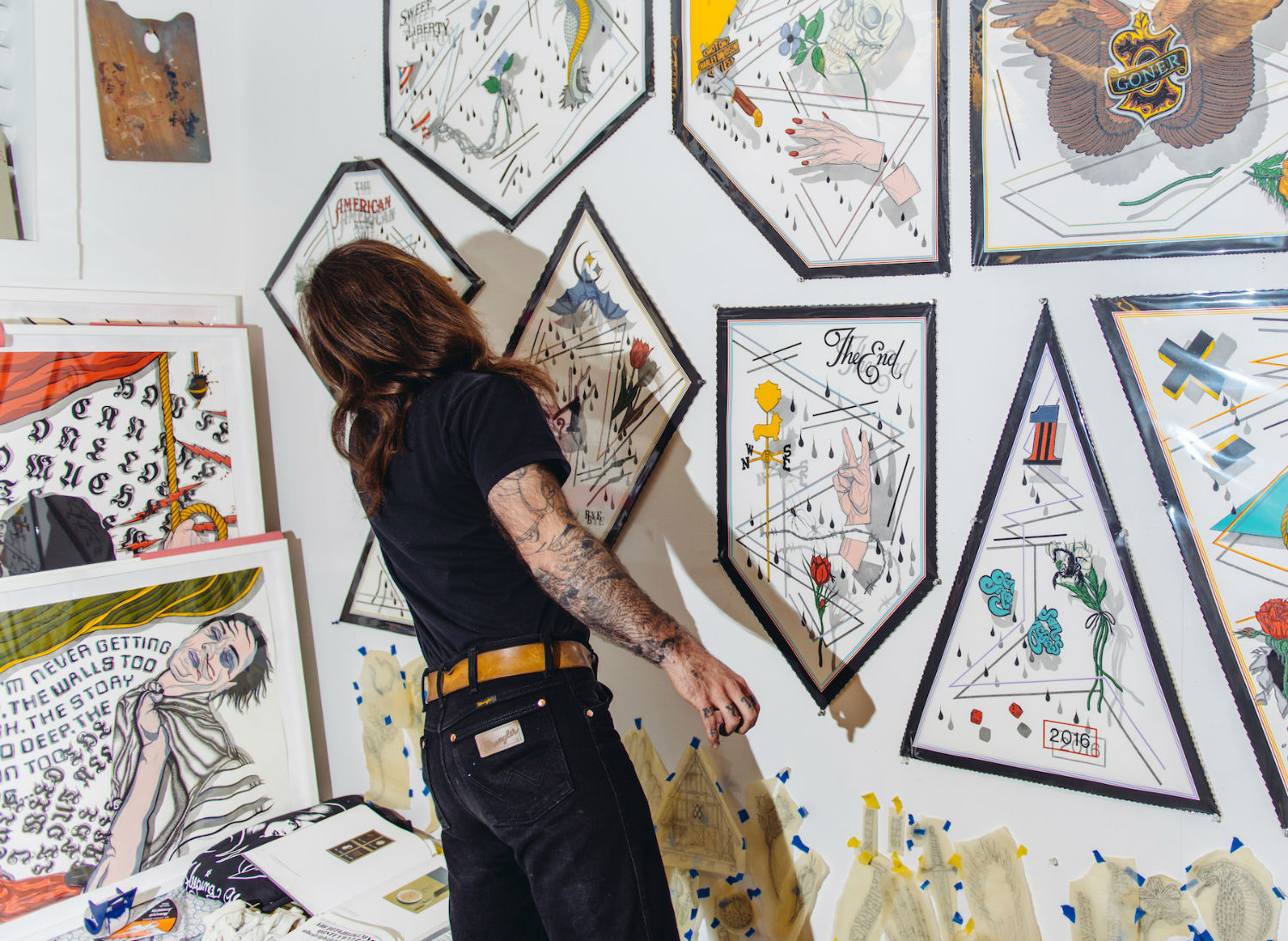 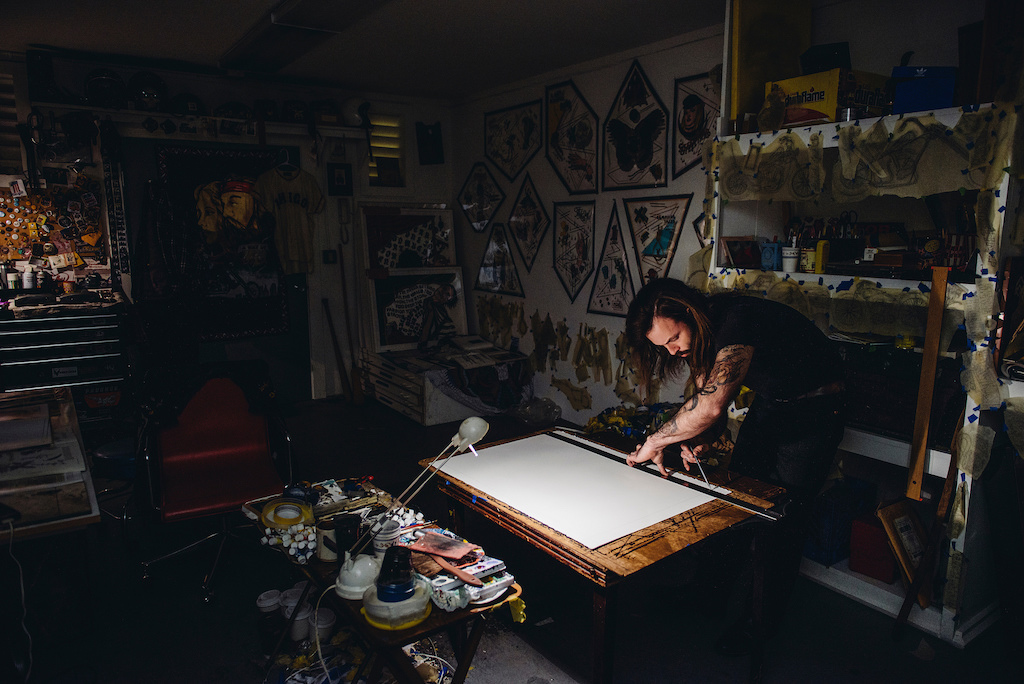 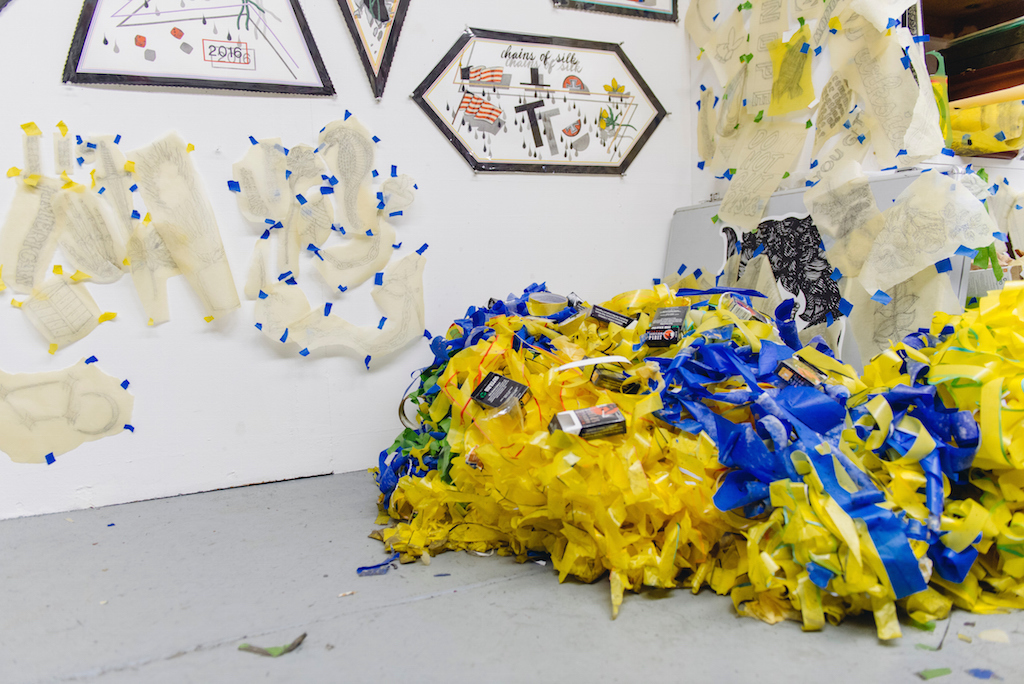 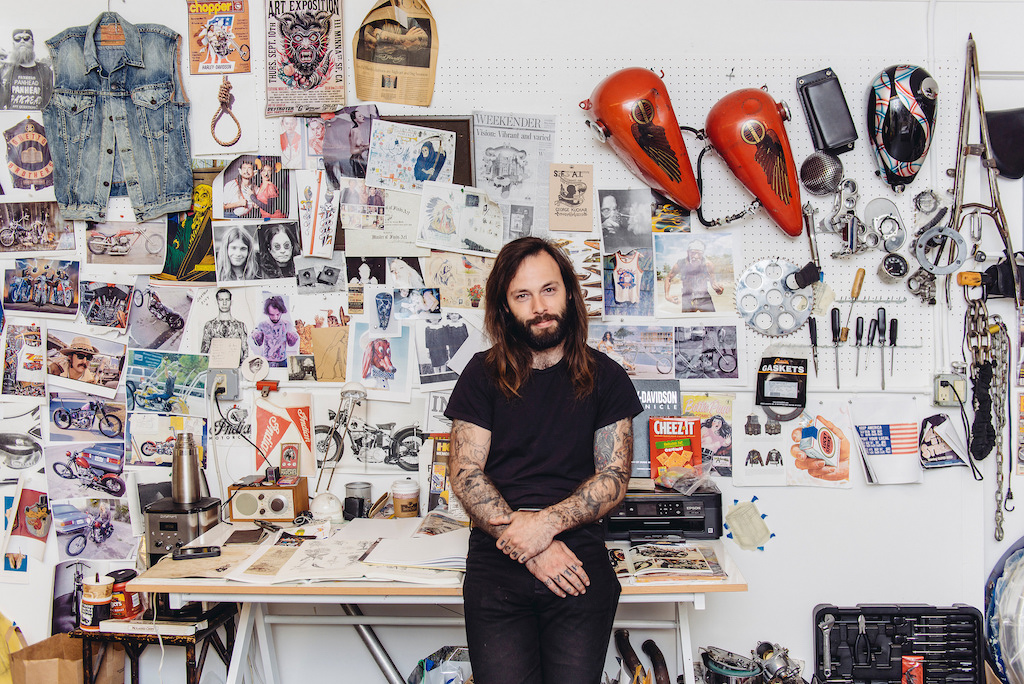 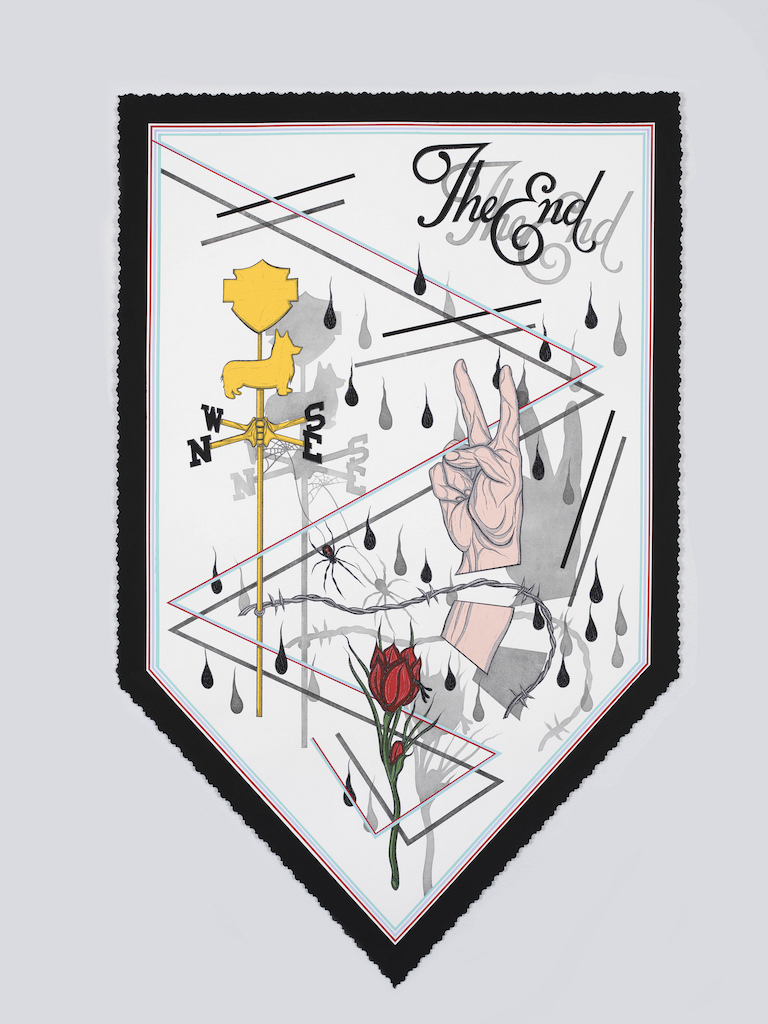 Based in San Francisco, Alex Ziv is presenting his new show, Cut Away(s), at Hashimoto Contemporary. The show will introduce a new series of works on geometrically cut paper.

Alex Ziv’s minimal compositions are masterly executed, engaging the viewer in their technical achievement and intricate visual balance. Moving outside of traditional rectangular dimensions, each piece is specifically formatted to mirror its graphic components. Dark lines simultaneously link and fragment the varying figures, leading the eye through a web of colorful insignias. Ziv’s work centers around personal iconography, and the connection of symbols to memories. Emblems of motorcycle culture, traditional flash tattoo, and vintage typography present an intimate portrait of the artist.

He elaborates, “I pick, pull, remove, isolate, and appropriate imagery from a variety of sources to create a new personal map for my identity, and leave markers in which others can relate and follow. Humans are visual beings, we want to read, we like following lines, and building my own semiotic vocabulary to portray to others an acting gateway into something deeper.” The exhibition title Cut Away(s) references the unique shape of each piece and also alludes to the inherent escapism of the American landscape, a “lust to be lost”.

Can you tell us a little about yourself? What’s your background?
Well, my name is Alex Ziv and I was born in San Francisco in 1988, and here I have always remained. My parents moved here from southern California and had me. They were always incredibly supportive of any passion my younger brother and I picked up, and for me, it was drawing and painting. There were always coloring books, paper table clothes to draw on with crayons, cartoons and animations being played and tempera everywhere that kids are so famed for throwing around. Drawing and painting was always something I did to pass the time, get alone time and fall deep into. I am incredibly lucky my parents saw my knack for it and pushed me in directions that were challenging and catalyzing. Art always kind of remained in the background as something I just “did”, until high school. I had an art teacher named Richard Olsen who was hugely influential in my now permanent focus on making. He unhinged what I thought I knew in regards to potential, openness, and limitations within art. He exposed me to artists I needed to see, gave me the space I required to make what I wanted, and pushed me in directions I wouldn’t have been pushed in an urban public high school environment. He is absolutely responsible for making me want to create for the rest of my life and recommended me to The San Francisco Art Institute (he is alumni) where I attended undergrad and graduate school. 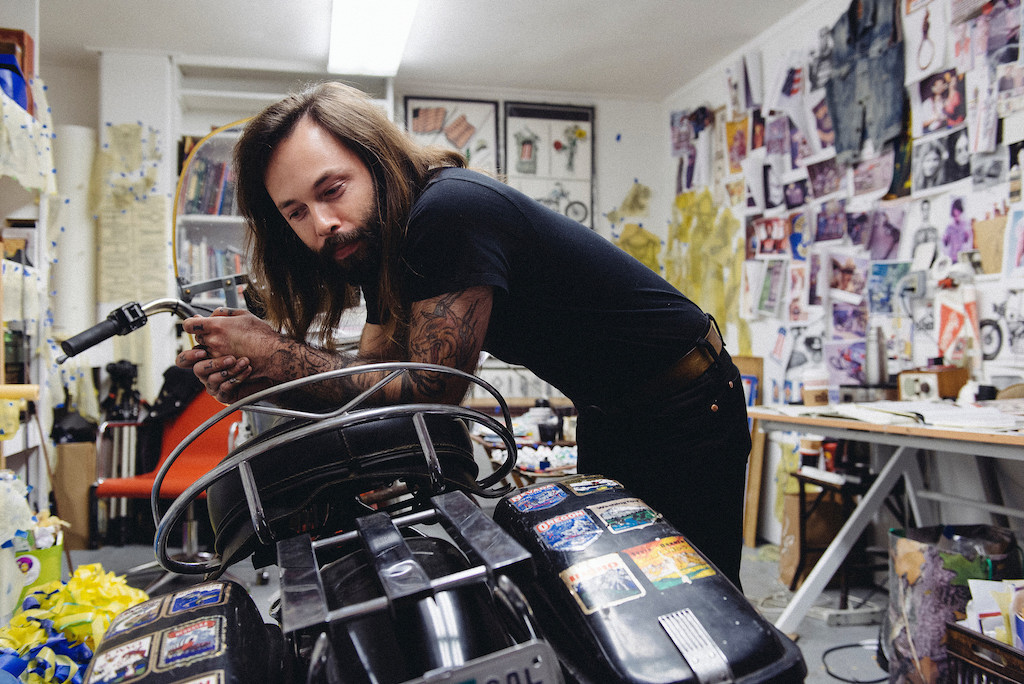 What sparks the creation of a new piece? How does your process unfold in the studio?
I usually have a pretty decent stockpile of ideas I’d like to execute. But any artist will tell you that nothing begins and ends the way you envisioned. For me personally, creating a new piece usually begins with a “flash” spurred by an image I see, or a feeling I have based on an experience. Like a frame on an old film reel moving by too quickly, but you still get a short glimpse. The longer I work on a piece, the more consistent the image becomes and the picture forms. I am a self-admitting workaholic. I work every evening, everyday at my studio after I get out off of my day job seven days a week. The pieces usually finish in a form I wasn’t expecting, and in a blissfully accidental way inspire the next piece. Technically, I draft everything out on tracing paper or velum and refine until images are where I want them to be, transfer them to watercolor paper, pen the forms out, erase the graphite and begin to block in color. I work exclusively in gouache. Light shades are first, darker tonal values second, black comes third, white highlights on all of the black lines and objects fourth, and drop shadows last. I don’t really know if a piece is going to work the way I want until about the thirty-ish hour mark, which is around when the black lines go in. But when it does......it is one of the most rewarding feelings I have experienced as an artist. Being confident, but unsure until the last moment, and then it all comes together. The best.

What ideas and themes were you thinking about when creating this body of work?
This new body of work is deeply personal as its foundation is based on experiences I have never sat down to confront and deal with. The themes include the lust to be lost, emotions and growth that spawn from being on he road, heartbreak, death and identity. During graduate school, my work got incredibly dense visually. The pieces were packed with so much imagery it became easy to hide mistakes and lose someone in how much content was portrayed. Towards the end of my time in grad school I got incredibly attracted to the minimalism. I began working on piece’s that conveyed as much information as I could with as little representational imagery as possible, which is incredibly challenging both technically and conceptually. Revisiting my prior work from grad school is what brought me to the start of this body. Getting as clean and technical as I can, while still leaving enough room for each piece to breathe. Creating pieces that are as light visually as they are heavy conceptually. 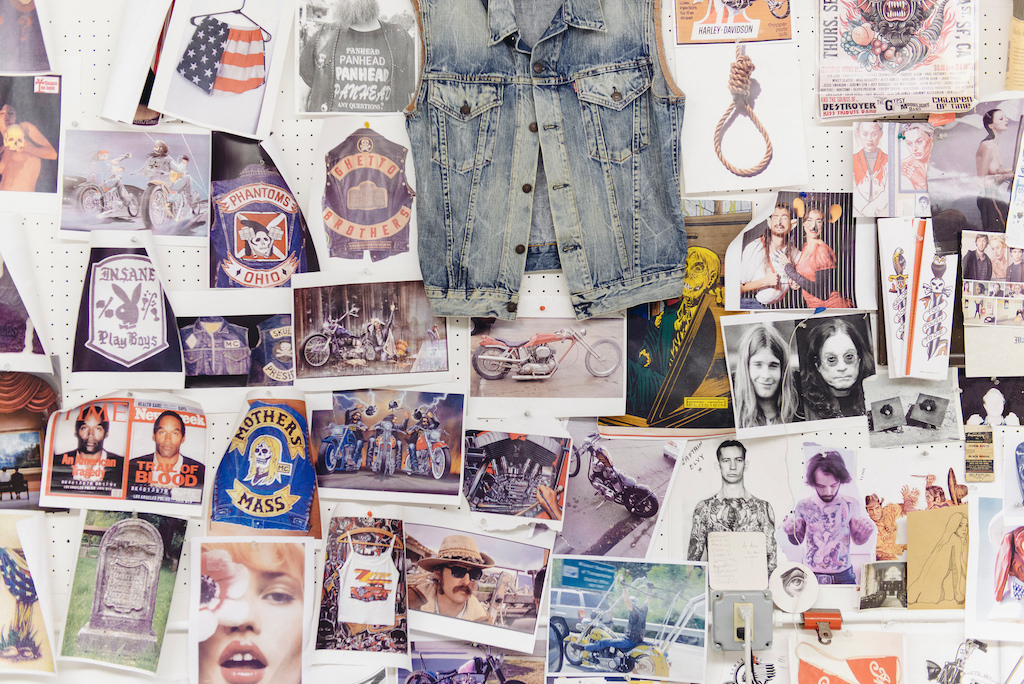 Your work interweaves varying elements, such as traditional tattoo flash, biker culture, Americana typography, and contemporary politics. How do you see iconography operating within your work?
I believe that artist’s surround themselves and portray imagery based on their own personal identity, intentional or not. Identity finds it’s way out visually one way or another. I am an American, who gets tattooed, who is attracted to bold imagery, rides motorcycles, etc etc and it has found its way out into my work. American motorcycle culture is one part and a big piece of my own personal identity. Other than art, it is the community I am the most tied to and participate in the most frequently. Once I started noticing patterns that occurred on the microcosmic scale, I started applying them to the macro of American identity, American culture and sometimes history. The imagery I am most attracted to usually stems visually from boldness of color, aesthetic and meaning. All of which is ripe and rampant within the motorcycle realm and it’s history. But to me, imagery that leaves the biggest impact are those which feed into my young American identity, which many of my pieces in this body and prior revolve around. There are many internal conflicts I have with sects of the motorcycle realm that directly contradict my own morals and identity, which makes it a potent subject for exploration. “I pick, pull, remove, isolate, and appropriate imagery from a variety of sources to create a new personal map for my identity, and leave markers in which others can relate and follow. Humans are visual beings, we want to read, we like following lines, and building my own semiotic vocabulary to portray to others as an acting gateway into something deeper is how I’d like this work to operate and function”

What do you seek out when you need inspiration?
I am inspired by a ton of things. But one of the first things I do when I seek inspiration is hit the road on my bike. I pack, I dial in my bike and I leave. Living off of your bike for a couple weeks forces you to live minimally, expose yourself to the extremes of the elements, and humbles your needs of tons of unnecessary shit in your life. Everything becomes incredibly simple. You meet others in the strangest ways, have amazing encounters, get incredibly freaked out and see the country in ways you just can’t in a 4-wheeled vehicle. I am also incredibly inspired by girlfriend, who is an incredibly talented ceramicist; my other half, a rock for me that keeps me grounded and lets me bounce ideas off of her, for as long as I need until I find where I am going. She is a motivation forge for me. 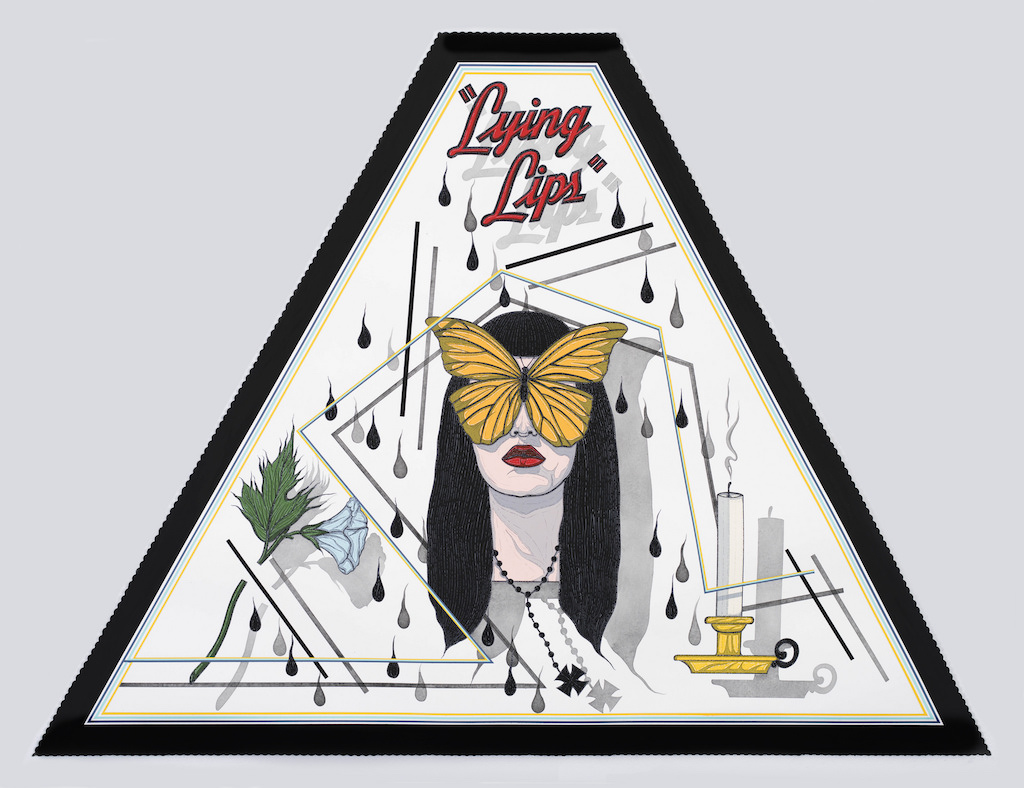 Can you tell us about your exhibition title: Cut Away(s)?
The show title Cut Away(s) came about in a couple of different forms. Before there were choppers and bobbers in the motorcycle vocabulary, there were “cut downs”. They were motorcycles with every ounce of fat cut away and removed so as to make it faster for race purposes. It later came to mind again subconsciously via the literal act of how the pieces of this new body took shape (no pun intended). Rectangular pieces of paper that had their excess cut away into the non- conventional shapes I desired to see made. It also came around from the term “cutting out”, dropping everything and removing yourself to leave to go be lost in the unfamiliar.

What’s next for you? Any exciting projects ahead?
I have some group shows I am participating in that are very exciting. But I’d really like to take a long bike trip soon, especially with the summer about to hit, finances permitting of course. I haven’t taken more than 5 days off in almost a year. I’d also love to see more of Europe. I’m also already in the planning phases of a new body of work based on textiles, iconography and its relation to culture. It’s something I dipped a toe into a couple years back and am ready to explore again. They will all be non-conventional shapes as well and I couldn’t be more excited about seeing them made real.