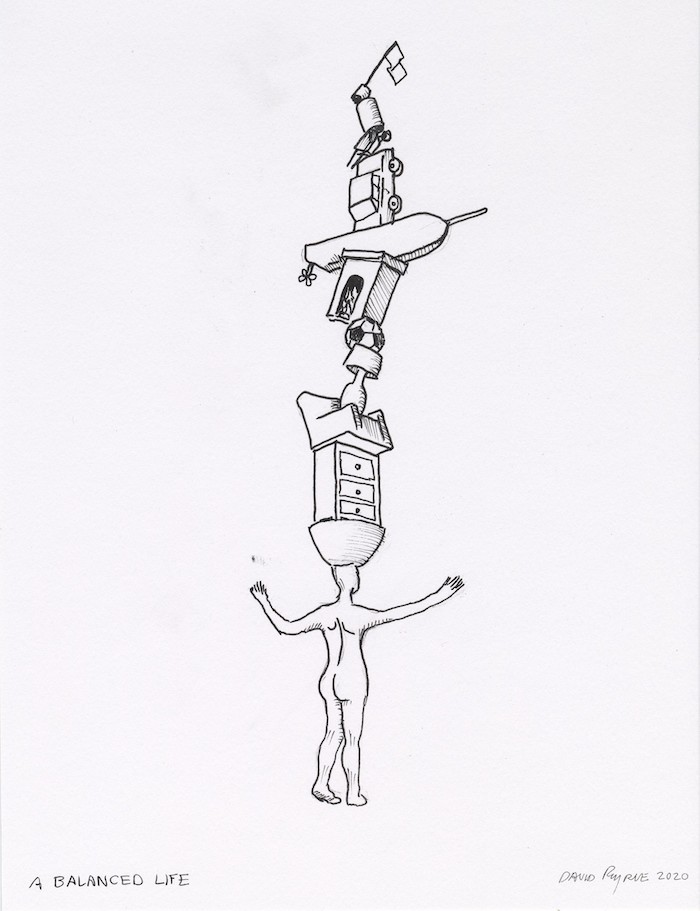 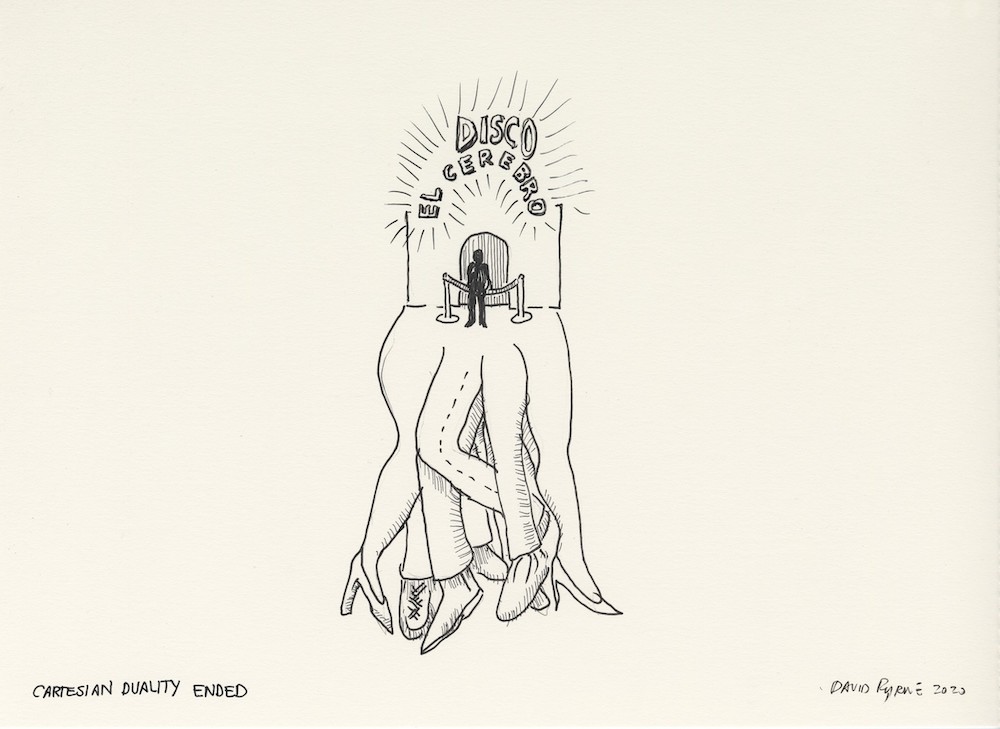 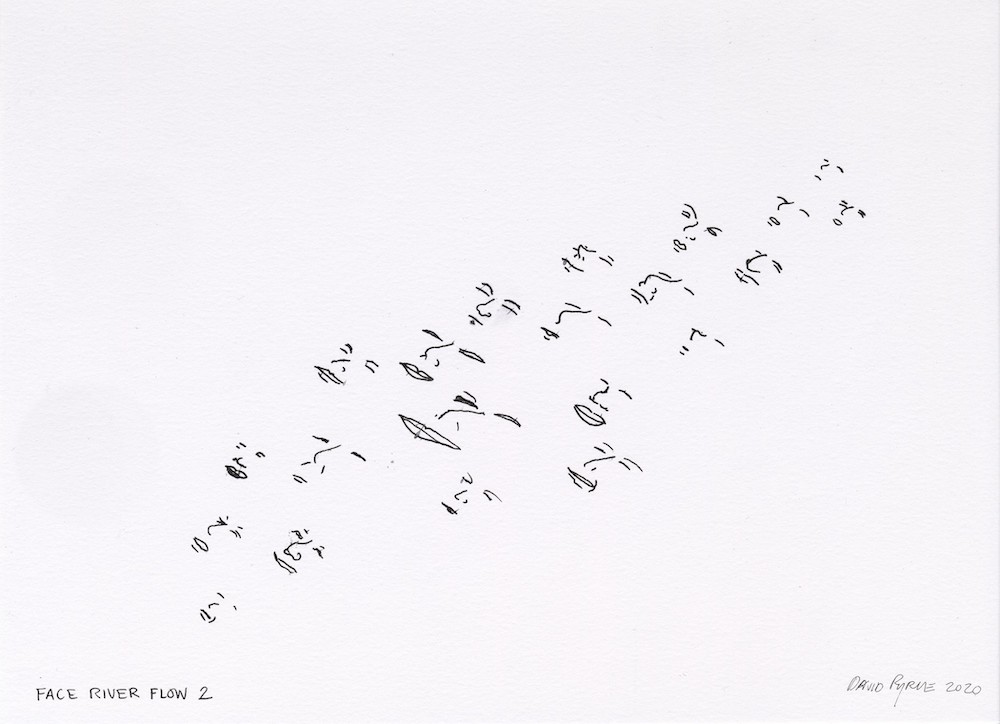 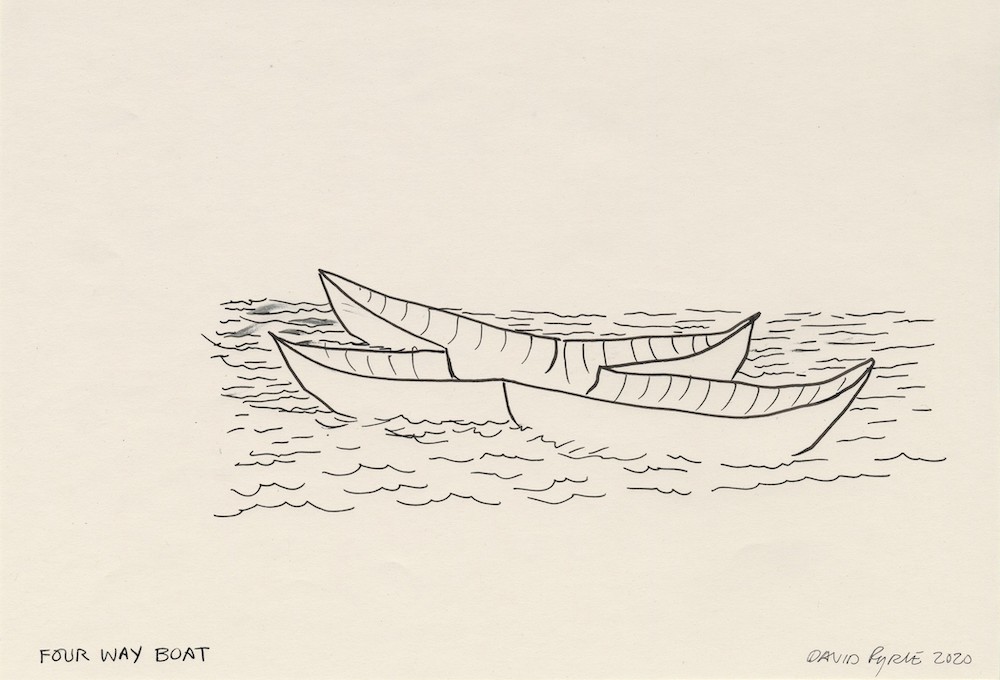 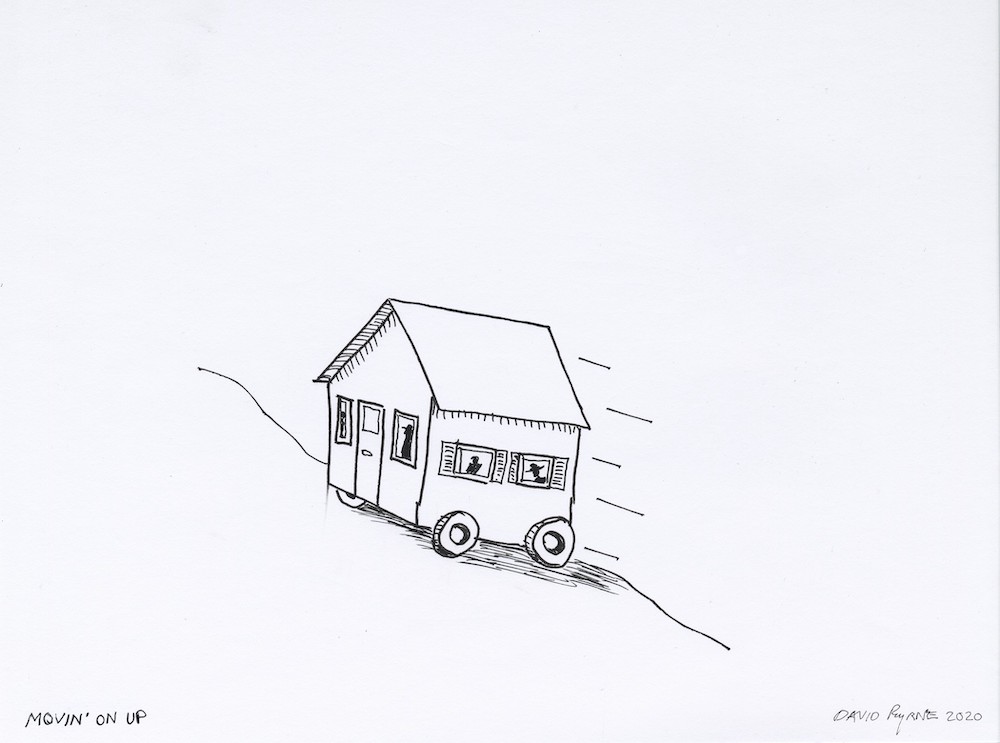 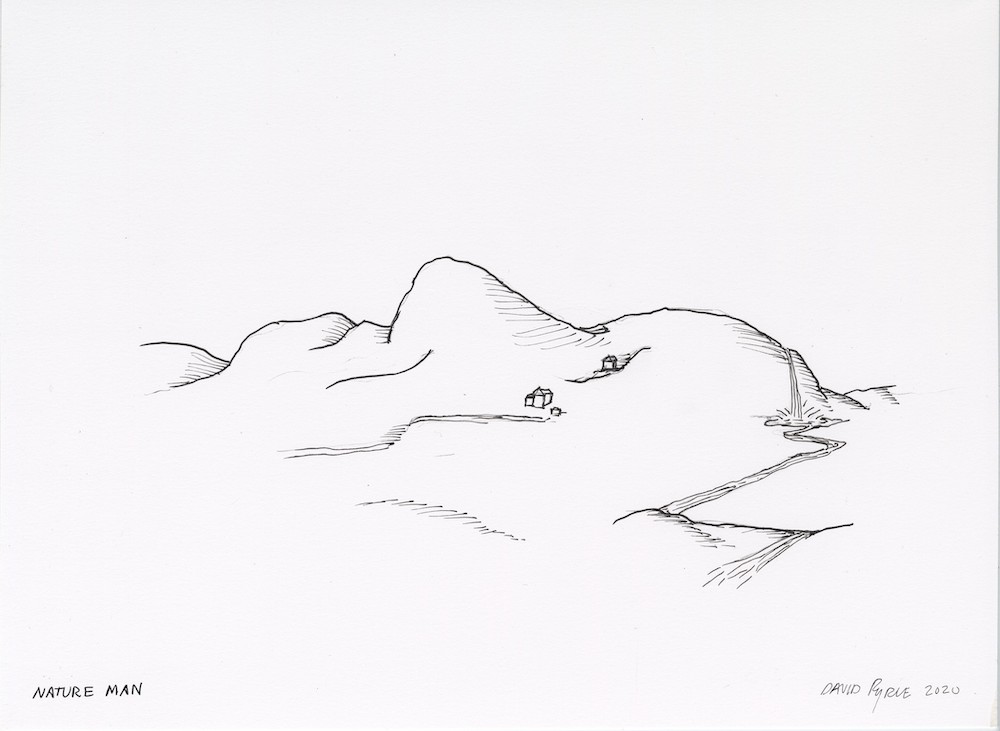 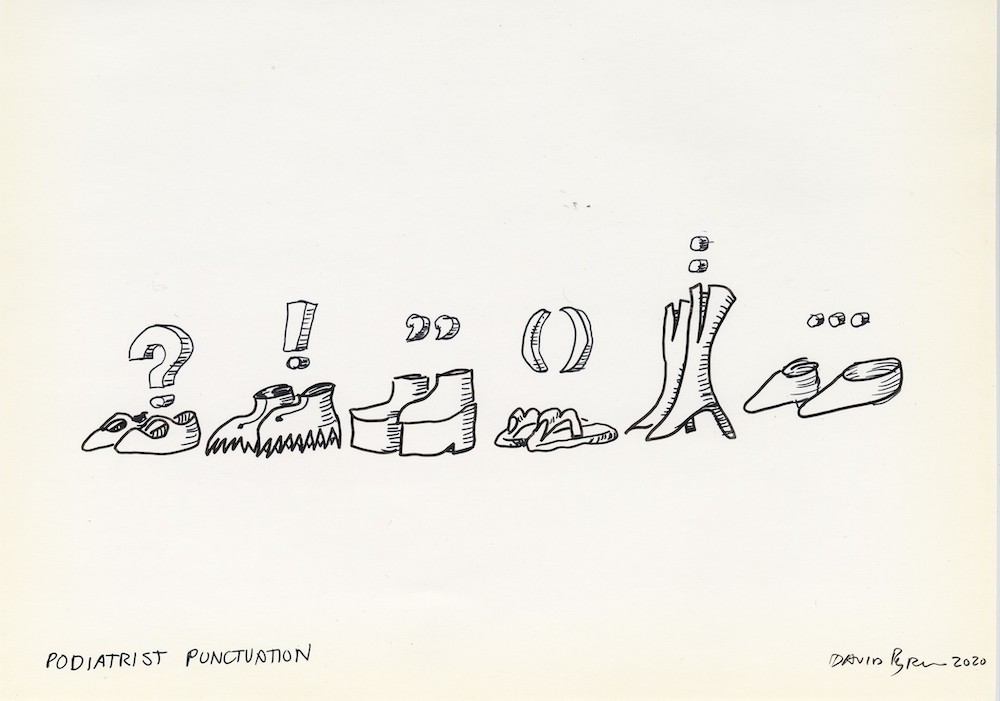 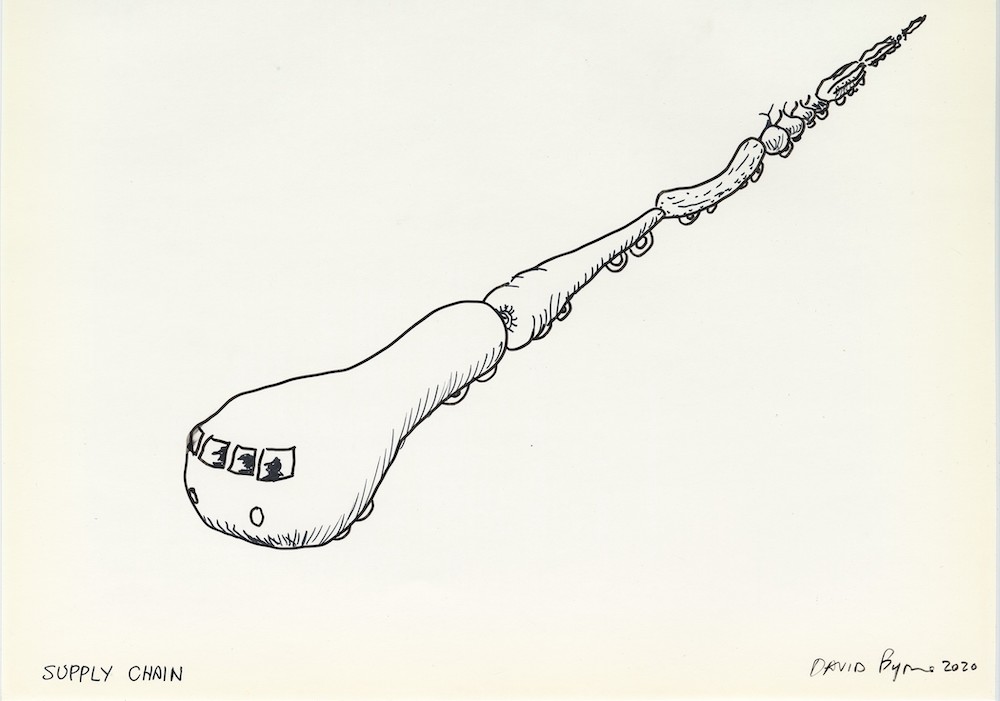 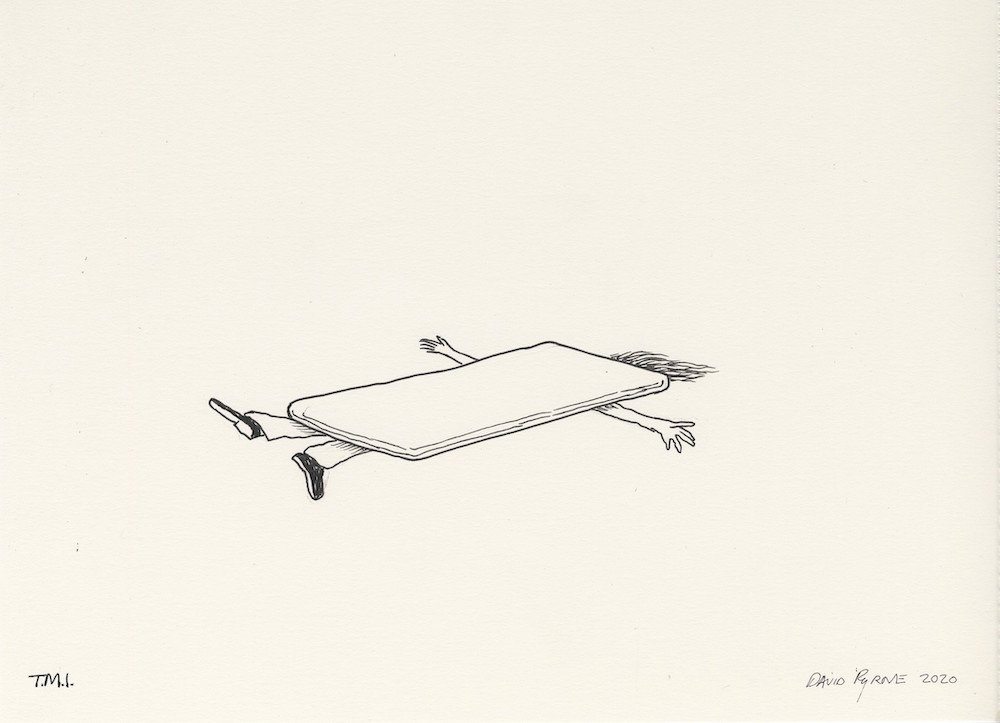 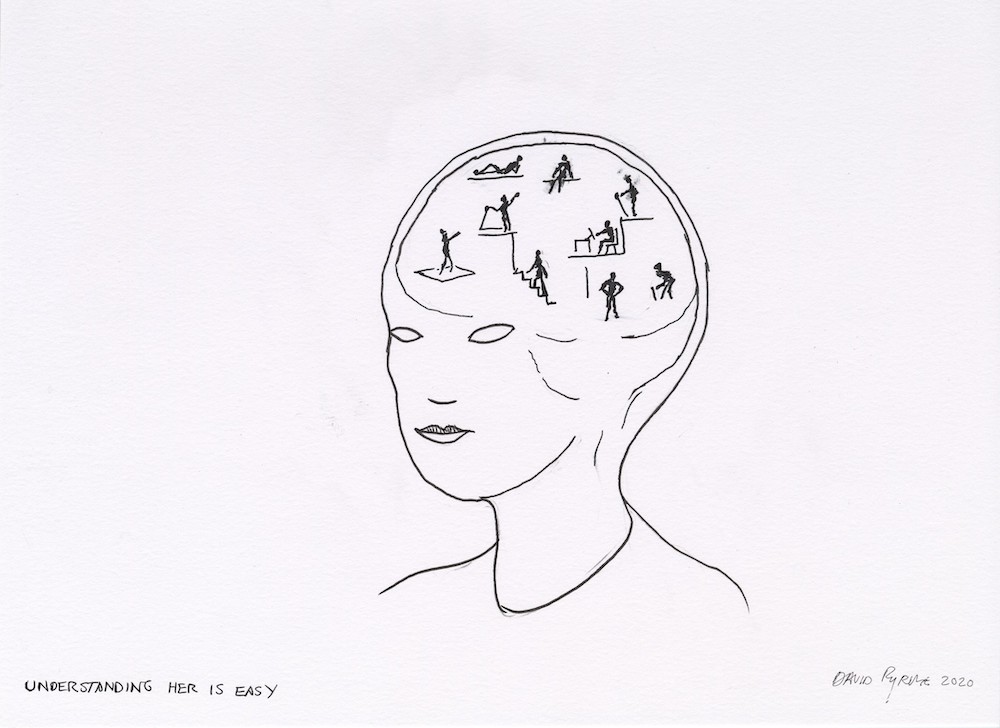 “There’s a party in my mind, and I hope it never stops.” David Byrne never stops, and just like the lyrics in ‘Memories Can’t Wait, he’s at it again.  Following the HBO premiere of his Spike Lee directed documentary, American Utopia, the artist and musician introduces an online exhibition, Dingbats, hosted by Pace Gallery.  Released in five series of ten works published every Monday and Thursday between October 15 and November 2, 2020, sale proceeds directly benefit Byrne’s Arbutus Foundation which is dedicated to a collective reimagining the world.  That means all of us joining together in projects that inspire and educate! Additionally, a rotating series of ten drawings, reflecting the most recent selection in the online presentation will also be on view at Pace’s New York location at 540 West 25th Street for the duration of the project.

The ink on paper illustrations were made this year while the artist was isolated in his Manhattan apartment. Naturally preoccupied by the loneliness, boredom, and anxiety brought on by the Covid quarantine, Byrne manages to thread silver strands into the series. "A person crushed by a cell phone is optimistic? Depends on your POV I guess," the artist observed. "Some of them do indeed angle towards hope, as they were done for the with the main We Are Not Divided journalism series."

While working on this series, the artist immediately thought about dingbats, the decorative element used to visually break up imposing blocks of text. Unlike the “other” definition of the word, his dingbats function like a printer’s ornament,  eliciting humor and empathy as passages through the tumult. By telling stories through through reporting, analysis, and first-person experiences, We Are Not Divided exults in examples of people coming together through science, politics, technology, religion, social movements, and culture. Byrne's wit and vivid imagination spring forward with visuals that promote hope, connection, community, and unity due to (and spite of?)  the upcoming election. With this in mind, the Scotland born Byrne will participate in a fireside chat and storytelling event during the week of October 26, 2020, one week ahead of Election Day, which will be streamed live on Pace’s Instagram.”As people we’re a work in progress.  Who we are extends beyond ourselves through the connection between all of us.”

Despite our desperate desire to find a relationship between the images and Byrne's music, the artist scoffed, "Nope, no connection to song lyrics that I know of." Yet, his poetry, clever use of tropes, and creation allegories imbue this body of work. The drawings which will be presented through Pace include images that are entirely literal, as well as others which are subtle evocations of the longstanding inequities and injustices exposed by the pandemic. “I got a bit carried away and made them quite a bit more elaborate than the typical dingbat. I decided to give them titles too, and I soon realized that the titles became integral to the meaning of the drawings. Humor sometimes allows us to say the unspeakable. So these seem to be about how it is to live right now. In this New World. They allow me to say things visually that it might be too hard to say in person.”

The Dingbats online exhibition marks the artist’s 7th collaboration with the gallery since 2003, and is entirely committed to the Arbutus Foundation, bolstered by the We Art Not Divided project and his online magazine. "Arbutus has been up and running for less than a year, and Reasons To Be Cheerful for a little over a year. We're just getting started. About 2 years ago I did realize that to have more impact the RTBC pieces would have to come out more regularly than they were when it was just me, and would benefit from a structured platform with rigorous editing, fact-checking etc.... Arbutus helps make that possible." —Sasha Bogojev