Photoreal Folk: Tim Conlon and Train Culture for "Beyond the Streets"

For anyone who has ever examined the history of graffiti, there are key milestones which occurred that took the medium from folk art doodlers like Kilroy was Here, to the billion-dollar-plus industry that exists today.

Whereas graffiti will always be romanticized for its connection to the New York City subway system, its transition to freight trains that criss-crossed the country in the mid 1970s,painted by early writers like TRACY 168, P-NUTTII, SUROC and IZ THE WIZ - allowed for those outside of major metropolitan cities to see the colorful abstractions which had started in the Big Apple and The City of Brotherly Love. 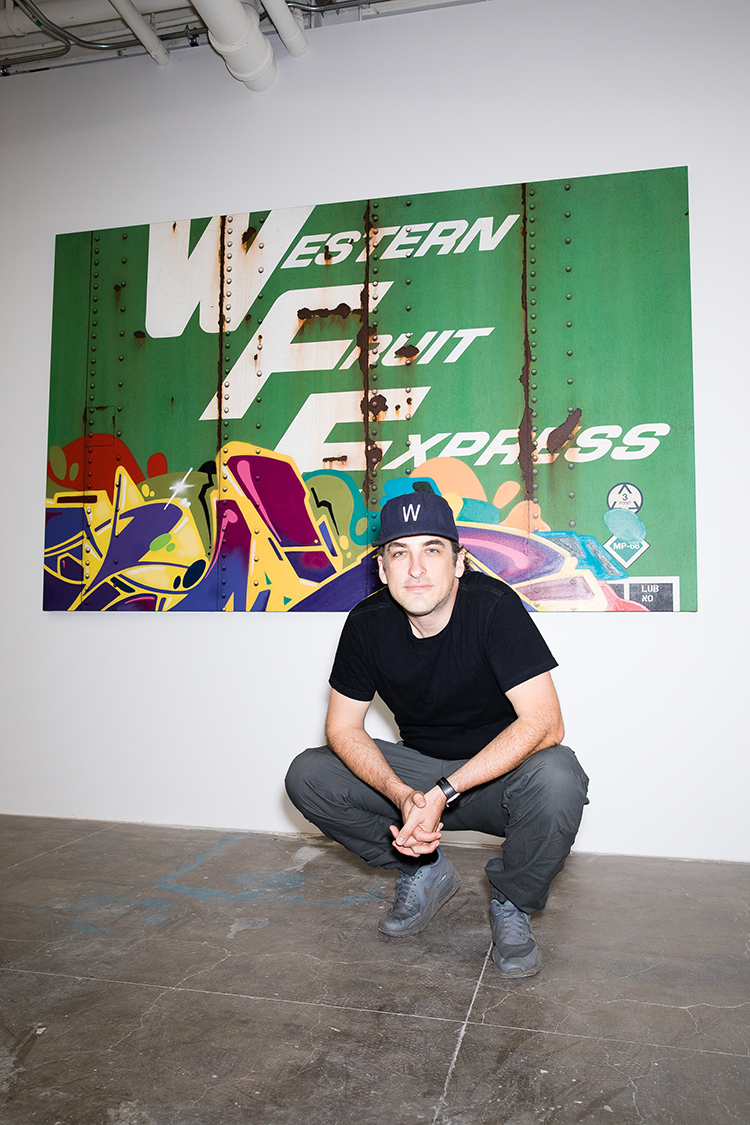 Following in their footsteps was Tim Conlon, who began writing graffiti as a college student in the early 1990s in freight yards in Baltimore.

In subsequent years, Conlon has mixed his graffiti pedigree with photorealistic representations—which he calls his “Blank Canvas” series—of the tangible and tactile train surfaces he worked on which serve every bit as much an homage to transportation history, as they do to the aforementioned graffiti pioneers.

Armed with spray paint, Conlon is able to achieve a stippling effect—in the form of weathered bolts and rust—over freight logos of yesteryear which he will present at the forthcoming exhibition, Beyond the Streets.

“In graffiti, you use these precise lines,” Conlon says. “But for the trains I spray from several feet back, then scrape it, apply another layer of paint and repeat the process until I achieve the desired weathered effect. I’ve been painting for more than 30 years, and I still like to use that can control and other techniques I learned. I didn’t want to completely set it aside.”

In addition to his paintings, Conlon has also assembled a series of replica freight cars which he first presented at Art in the Streets at the MOCA in 2011.

“The original group of artists featured on the model trains were pioneers from the early 90s, when graffiti was just starting to become popular on freights across the United States. Beyond the Streets gave us a chance to add a few new trains from writers and crews of that era.” Cities represented include Boston, New York, Pittsburgh, Philadelphia, Baltimore, Atlanta, Jacksonville, Miami, Minneapolis, Milwaukee, Dallas, Los Angeles, San Francisco, Oakland, Portland, and Seattle.

Positioned alongside other men who made their mark by either painting or documenting the freights like buZ Blurr and Bill Daniel, Conlon is excited for what the trio represents at Beyond the Streets.

“I think the three of us together complete a picture of older, moniker-based writing, the modern letter-style painting, and the documentation of the railroad; from culture, art, logos, personalities, etc.”

See Tim’s work alongside many other great artists at Beyond The Streets, launching in LA May 6. Tickets available at beyondthestreets.com