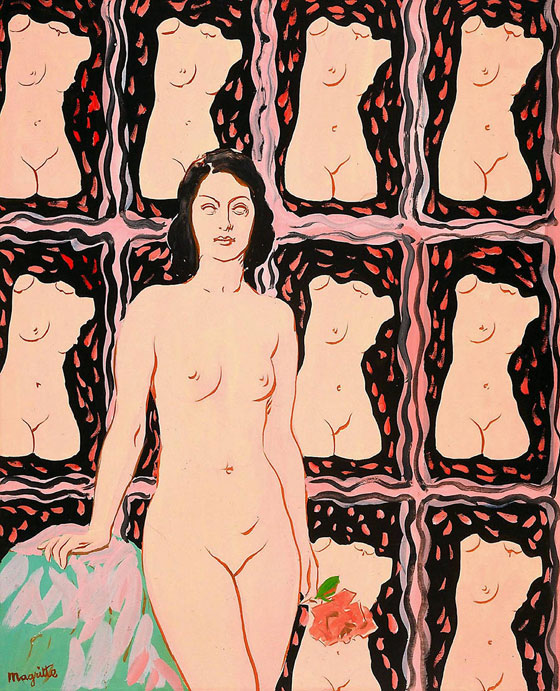 In 1946 Magritte issued his manifesto Surrealism in full sunlight, saying, “We have neither the time nor the taste to play at Surrealist art, we have a huge task ahead of us, we must imagine charming objects which will awaken what is left within us of the instinct to pleasure.”

Although his "sunlit" Renior styled paintings began in 1943, all his work was not impressionist. At the start of 1947 Margritte was painting in both his realist style and his impressionist style. Some of his works (Intelligence; A Thousand and One Nights) were already headed toward more extreme colors. This fauve-inspired extreme style, closer to some of Van Gogh works, would accelerate in late 1947* [see 5th paragraph] when he was invited to hold his first solo exhibition in Paris at the Galerie du Faubourg in May 1948. He had waited twenty years to do a solo show in Paris and was resentful at the lack of appreciation that he felt the Parisian surrealists gave him. Magritte wrote at the time: "The paintings of Picabia should not make us dream of the revelations to be gleaned from coffee dregs, or prophesies..."

According to Bernard Marcadé: "In French, the term vache is used for an excessively fat woman, or a soft, lazy person. An unpleasant person is described as a peau de vache (cow-skin); amour vache (cow-love) refers to a relationship more physical than emotional. It thus treads a line between vulgarity and coarseness, and that is what characterises this set of paintings and gouaches, representing a radical departure from the painter’s neutral, detached style which had finally been accepted by Parisian Surrealist orthodoxy. Overall, the striking thing about these works is their garish tones, their exuberant, grotesque and caricatured subjects, all executed rapidly and casually in the name of a freedom from aesthetic and moral injunctions and prescriptions."

Louis Scutenaire came up with most of the titles and his wife, Irene Hamoir, contributed many of the ideas. Later on in the 1960s when cataloguing his own work, Magritte refered to the "vache" painting as his fauve style, a term he did not use in the 1940s and 1950 which he also called them, "the paintings of the doomed period."