Daniel Martin Diaz and The Soul of Science 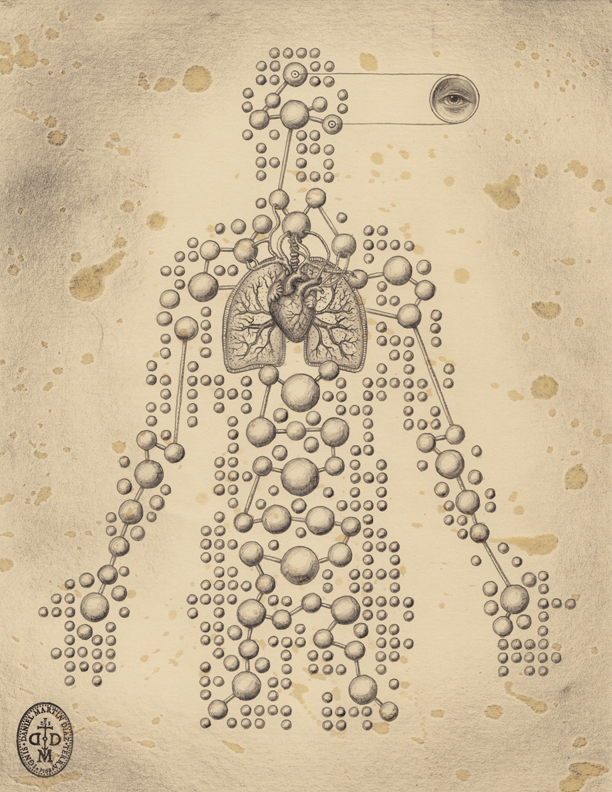 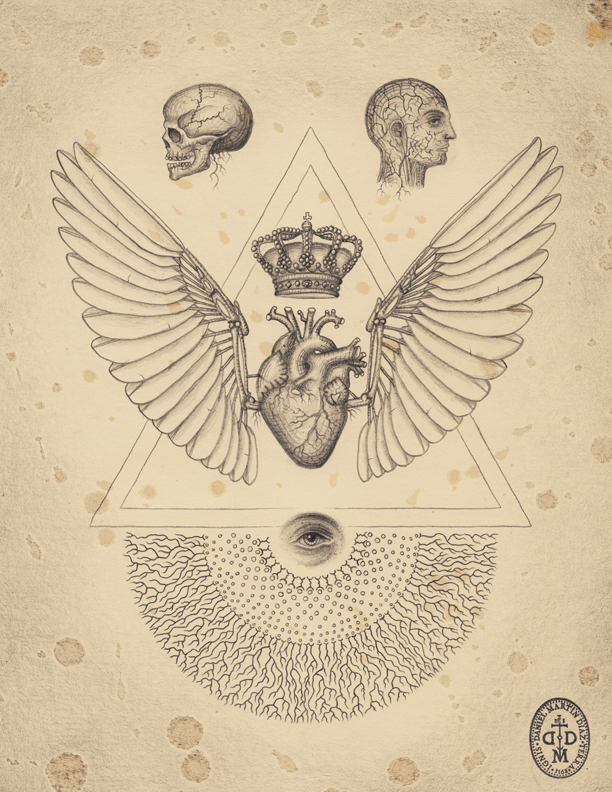 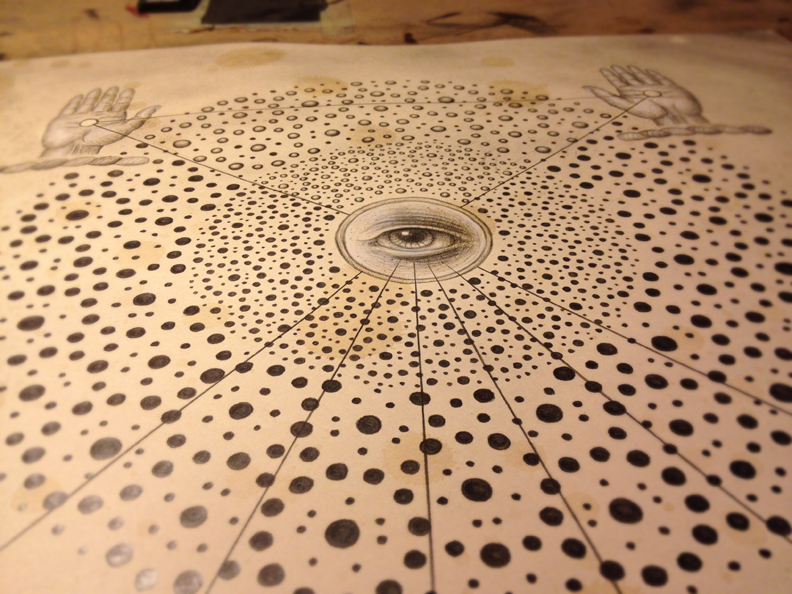 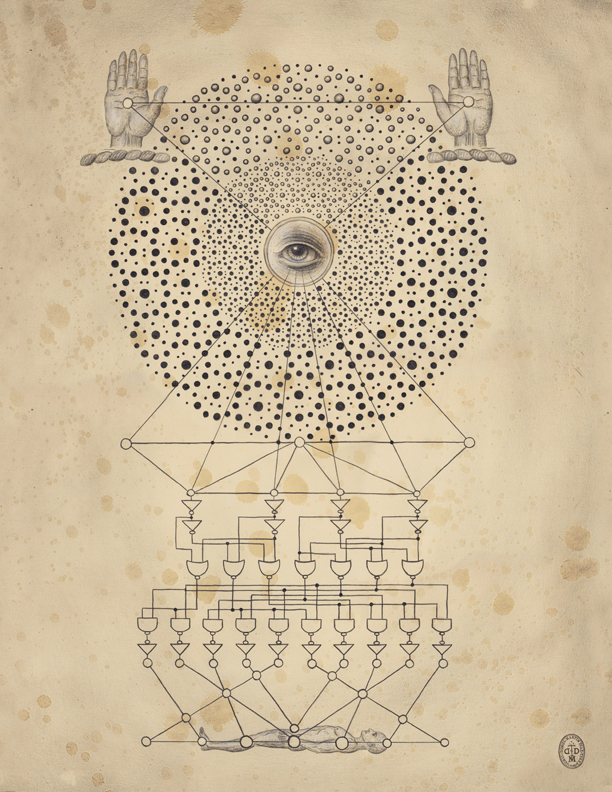 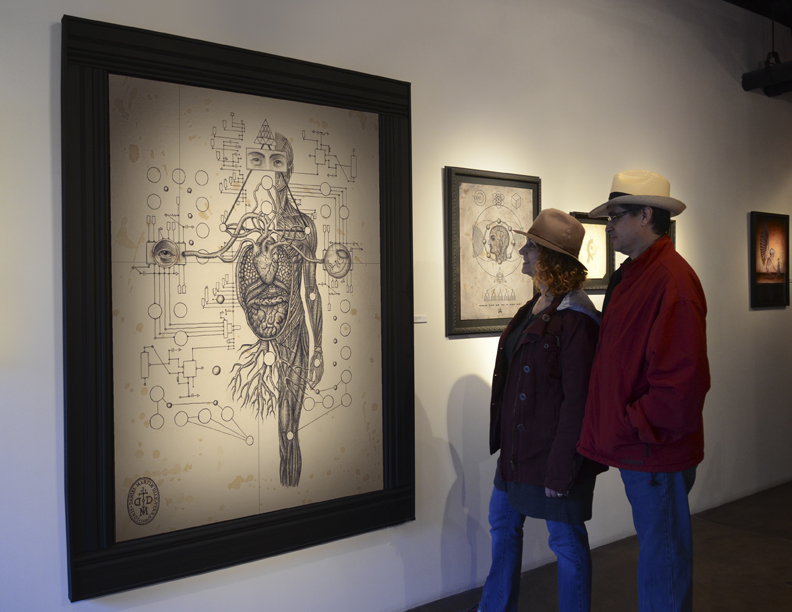 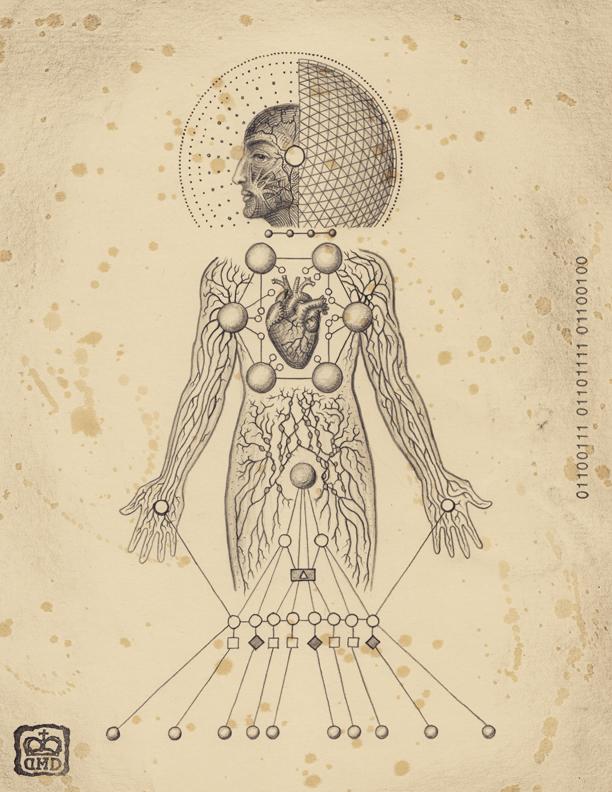 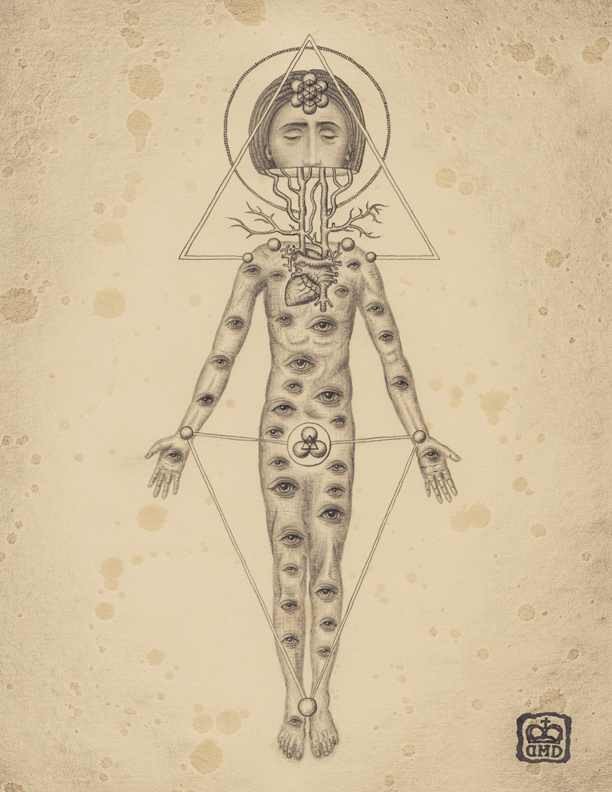 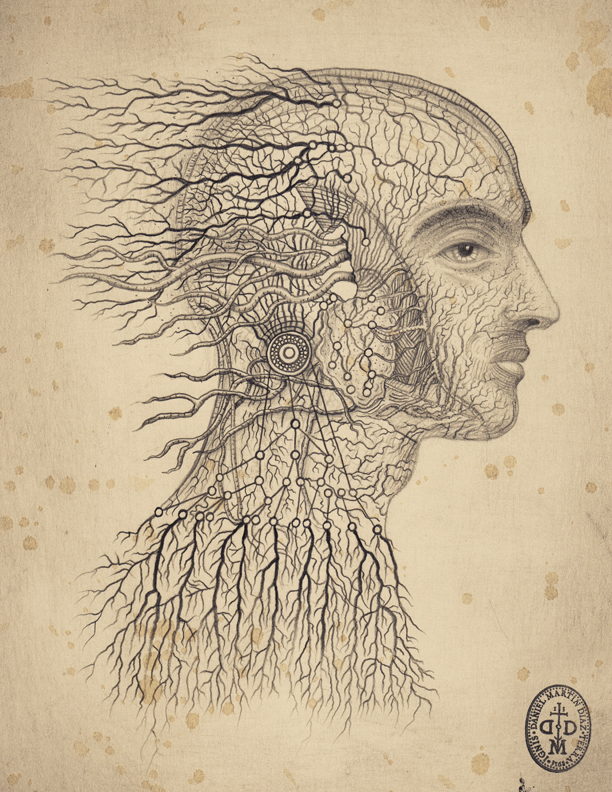 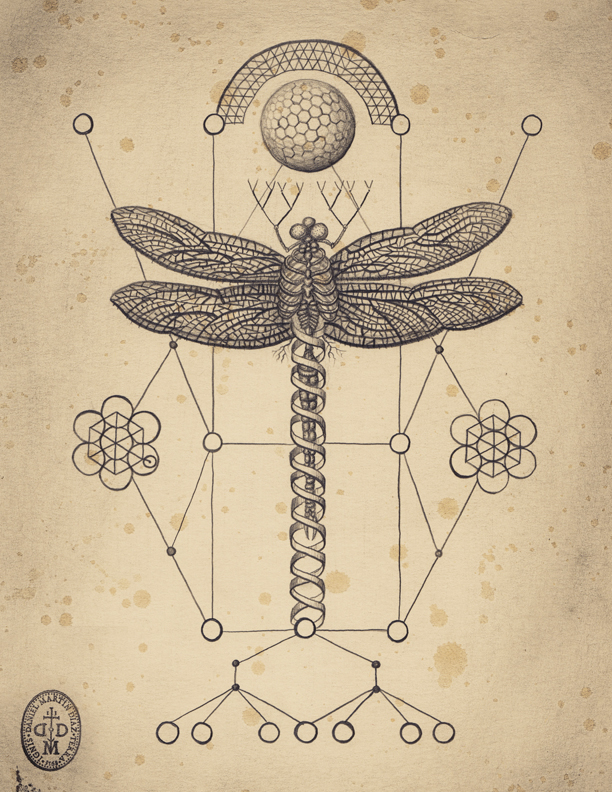 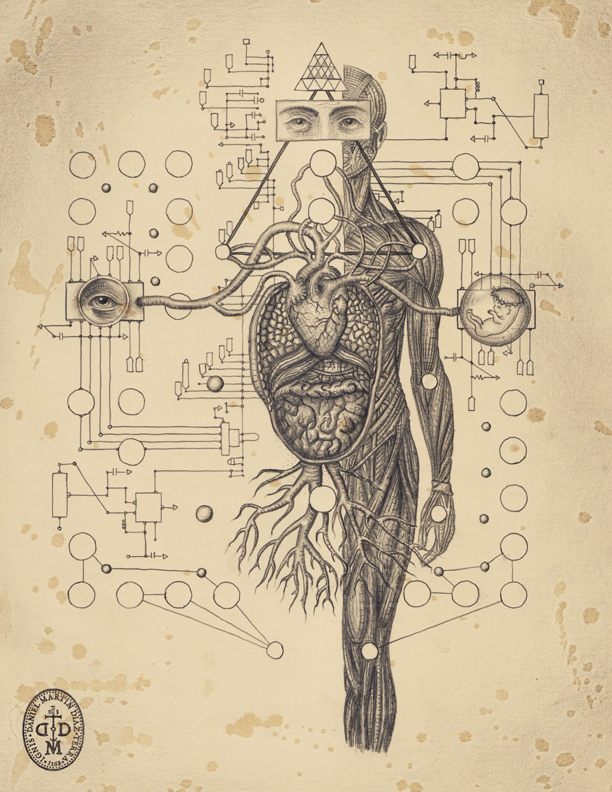 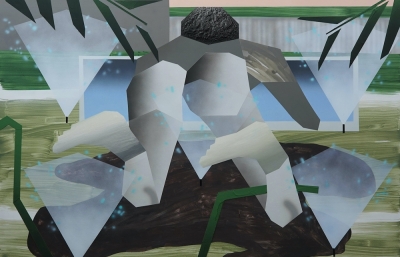 Based in Tucson, Arizona, Daniel Martin Diaz is a fine artist with an insatiable curiosity to explore the mysteries of life and science through creative production. In his forthcoming collection of art and essays, "Soul of Science," Diaz tackles the elusive properties of consciousness and time through a personal visual language that draws inspiration from the old Flemish masters as well as from modern scientific theories.  Intespersed among Diaz's exquisitely rendered pieces are several illuminating writings contributed by mathematicians, physicists, and art historians, each examining the same universal questions from their unique academic and individual perspectives.

Based in Tucson, Arizona, Daniel Martin Diaz is a fine artist with an insatiable curiosity to explore the mysteries of life and science. In his forthcoming collection of art and essays, "Soul of Science," co-created with his wife Paula Catherine Valencia, Diaz tackles the elusive properties of consciousness and time through a personal visual language that draws inspiration from the old Flemish masters as well as from modern scientific theories. Interspersed among Diaz's exquisitely rendered pieces are several illuminating writings contributed by mathematicians, physicists, and art historians, each examining the same universal questions from their unique academic and individual perspectives.

Looking at the totality of the work contained in "Soul of Science," its compilation of stained rolls of paper with diagrams of bodily systems and atomic universes, time seems to turn on its axis, compressing like an accordion into a tangible thing, an eternal, essentially esoteric question of human consciousness, being, and soul. It is a testament to Diaz' craft and inquisitive mind that such spiraling ideas are expressed with elegance and clarity, in addition to the beauty and emotional power inherent in his art.

Assistant Illustration Editor Laura Hines was able to sit down with the artist to discuss his process for "Soul of Science" as well as some of the scientific theories and conjectures that fueled his creative production.

LAURA HINES: Tell me how the concept for Soul of Science began.

DANIEL MARTIN DIAZ: In fall of 2011, I felt like I needed a change with my work, so I started evaluating things and stopped painting altogether. I just wasn't that inspired. By the time 2012 came around, I had only done three paintings. Around this time I began listening to philosopher's biographies and scientific documentaries about quantum physics, and astrophysics. I'm really fascinated by the mysterious, like the strange world of the microscale. There's so much we don't know, and my work explores the mysteries around us. So as I was listening to these audiobooks I was getting excited, and I started drawing organically with no intentions for the outcome. I was just excited to be inspired again.

I created my first drawing and thought I was onto something. Then I did another and felt inspired again, the possibilities were limitless. I had a new vocabulary, a new voice, but it wasn't so far removed from my past work, there was still a thread. It wasn't radically different, it seemed like a natural transition.

LAURA HINES: It's interesting to see how although the religious subject matter has evolved into more scientific content, your body of work still maintains this compelling sense of mystery. Did your explorations into the enigmas of science impact you on a personal level?

DANIEL MARTIN DIAZ: While I was doing the series, I was captivated, I had opened myself up to the universe. I started meeting scientists and philosophers, having great conversations, philosophical conversations about the mysteries of science. For instance my friend Greg Golden, who's a bioengineer. We talked about merging biology with electronic components and imagined what that world would like on the microscale.

LAURA HINES: So how do you see humanity grappling with these questions of consciousness as the earth's resources shrivel and our sun slowly dies?

DANIEL MARTIN DIAZ: Here we are as humans on Earth and at some point we have to leave because of the lack of resources. In a larger sense, at some point the universe will reach a constant. Atoms will stop vibrating, heat will dissipate and will reach absolute zero. Because humans have to leave the Earth to find resources, and because the universe is approaching absolute zero, we'll have to evolve beyond our biological selves. We'll have to merge with electronic components. The next phase beyond consciousness is in computer systems. They don't need biological cells anymore, so computers can exist in space without the resources our organic bodies need.

By us evolving and merging with technology, as the universe gets colder, we try to fight our demise. But once we're robots in space, even robots can't function in absolute zero. We will reach the point where our collective consciousness leaves its robotic systems and becomes a glob of consciousness in space. Since it's the consciousness of humanity and all living creatures combined, it's super intelligent, and has figured out how to manipulate time in order to avoid reaching absolute zero. It's the last leg of existence, buying time. And there's this concept that the super intelligent glob of consciousness will somehow punch a hole into the universe next to ours and start the process of existence all over again.

LAURA HINES: Those are some heavy concepts!

DANIEL MARTIN DIAZ: This is the kind of stuff I was thinking about perpetually during the series. I was once listening to a documentary about three mathematicians whose minds lead them to the depths of infinity, which tragically drove them insane. I felt like that, like I was on the edge and could lose myself. I threw myself out there and reeled myself back. It was a deep journey. It really changed me. I'm a different person in so many ways because of it. My interest was purely about the mystery of science. I felt like an observer, a sponge, gathering information and then juxtaposing the ideas in a new way.

LAURA HINES: In addition to its futuristic ideas, your work unmistakably harkens back to the classical masters of Renaissance Europe. What about these artists inspire you?

DANIEL MARTIN DIAZ: I've always been drawn to an old world aesthetic. My heroes are all from the 1400's to the 1600's. I'm not into too much modern art. The passion of artists such as Van Eyck, Bruegel, Hans Memling, and other Northern European Primitives, these are the guys who have resonated with me. For instance, I had a show in Luxembourg a few years ago, so me, my wife and son made a trek to go and see the Ghent altarpiece by Van Eyck. Some say it's the most incredible painting in all of humanity, on every level: scientific, technical, spiritual, emotional, every level. It's so hard to reproduce that aesthetic. I don't see them as artists, but as scientists, technicians, and alchemist.

LAURA HINES: I love being able to see the soul behind the artist in their work, which I think is true for your work as much as the old masters. Your art is refreshingly open and guileless.

DANIEL MARTIN DIAZ: I'm always drawn to art, artists, and things that are genuine. People can sense it if it seems forced. I'll abandon paintings when they seem too forced. I'm not going to to do it just to put a piece up for a show. If it's not real, and I'm not feeling it, I don't want to do it. Like with companies and the whole merchandising thing. I guess I have a weird and crazy standard. I ask myself, would Bruegel or Van Eyck do that? In my mind they wouldn't make a novelty of what they're doing. Who knows.

LAURA HINES: Coming back to the mystery present in your drawings and paintings, are the symbols that reoccur throughout your work understood to you, or are they a mystery even to yourself?

DANIEL MARTIN DIAZ: Some people need to explain what they created. I like the idea of not knowing. It keeps me inspired to start the next thing.

LAURA HINES: It seems that this ambiguity is part of makes your art feel so genuine, since it allows for others to find their own meanings in the symbols and imagery you use.

DANIEL MARTIN DIAZ: Carl Jung had a cool idea about this. His work was all about symbols, and how important they are to us as humans. If I were to show you a graph with 100 symbols, and you stood in front of it, certain ones would speak to you over others. Now the next level is to think what do they mean? Why does my eye fall on these ten symbols in particular? When I look at diagrams, circuit boards, or any pattern, there's always that one thing, that symbol that speaks to me on a gut level. I sketch it, I don't even think about it. It's something primal and it ends up in my work. In the big picture, certain symbols reoccur, they speak to me on a mysterious level, and I try to not to analyze what it means. It has a life of its own, and I'm captivated.

LAURA HINES: Did you change any aspects of your technical process for your Soul of Science pieces?

DANIEL MARTIN DIAZ: Technically, in order to convey scientific ideas, you have to be very precise. It brought my technique up a notch. You're trying to make ideas clear, not just do some abstracted linework.

LAURA HINES: You made the intriguing editorial choice to include the poem "All watched over by machines of loving grace" by Richard Brautigan in your book. Could you explain the significance of this poem?

DANIEL MARTIN DIAZ: It sums up the idea that technology is going to evolve to the point that it is so transparent we don't even notice it. No interfaces or buttons, just part of life. Computers will be like plants in our environment. It gets to the heart of the big picture: science, technology, consciousness. And that's what Soul of Science has done for me, given me the big picture of a lot of things.

I'm not impressed with new technology nowadays, because I'm thinking of those super intelligent globs of consciousness out there in space, manipulating time and the fabric of the universe billions of years from now.

Many thanks to Daniel for his kindness and sincere participation in this interview.