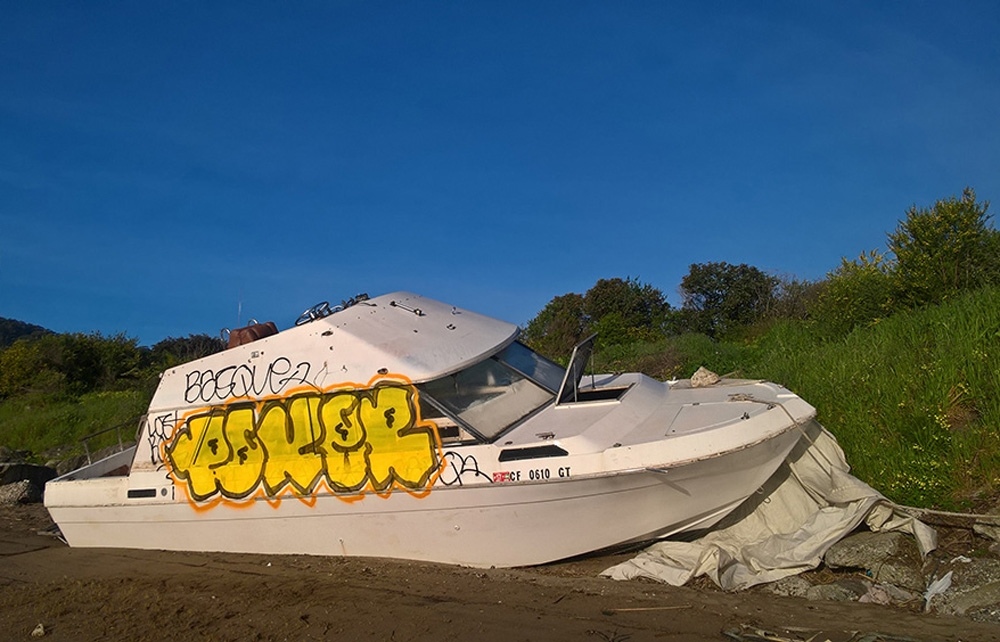 POKER is a San Francisco based graffiti writer, collage artist, zine curator, and all around cutty renaissance man. His studio offers a slight glimpse into his world; various rebuilt scooters, large abstract paintings, some smaller collages, spraypaint, stickers, skateboards, and what appears to be an empty briefcase with a window installed in it, but was later found to be a traveling window salesman's demo prop. Beyond the studio, POKER's life resembles his space; never lacking a project, going out to write at night, working nine-to-five by day, skating at San Francisco's Crocker-Amazon skatepark in the free time, and somehow still giving each project what it needs. We broke it down with POKER about growing up, getting into graffiti, developing an abstract technique, and a lot more. 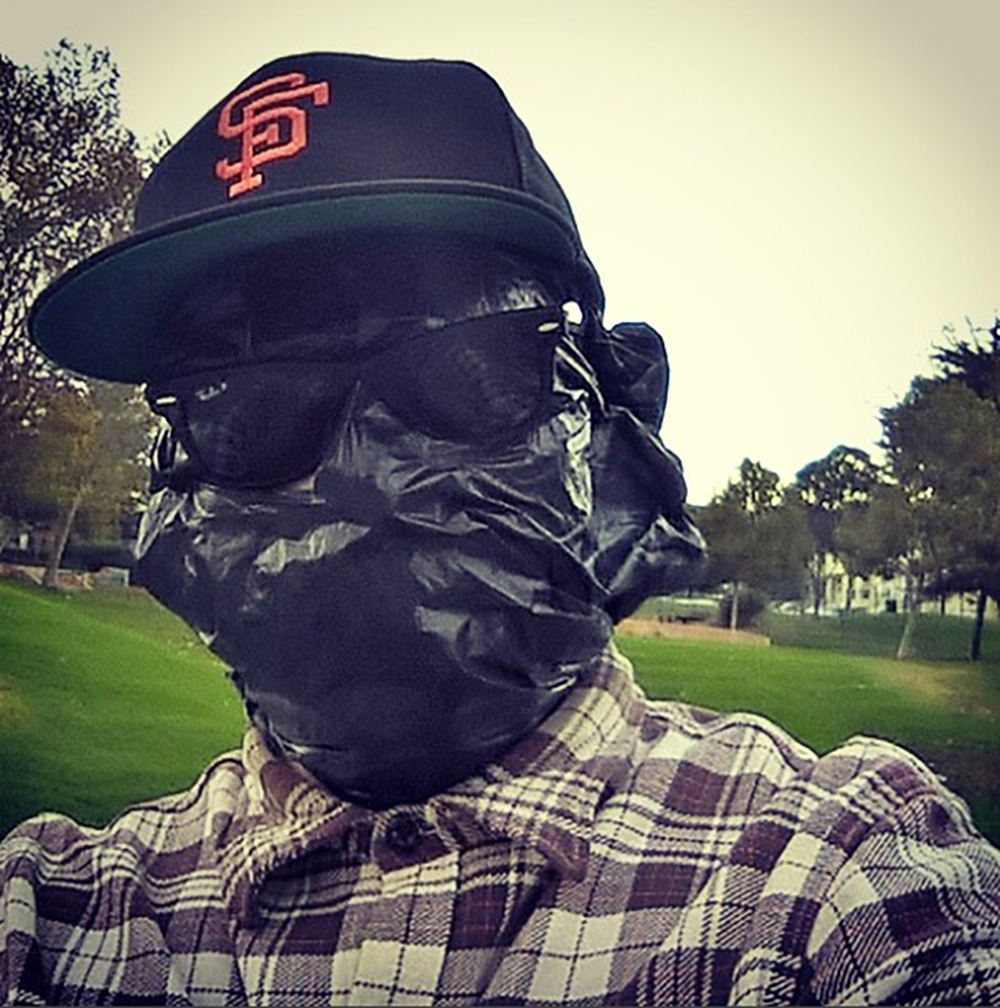 Juxtapoz: What kinds of things have you been creating in your various mediums?
POKER: I have recently finished a project entitled series one, in which I use an abstract technique that I developed when I was sixteen. The form is left for the viewer's own interpretation. The series consists of three 6'x6' paintings and six smaller works. This series heavily plays on the contrasts between colors and is loosely math based. I enjoy creating still life productions in varieties of mediums but I am fond of using watercolors while doing so. I love to draw and illustrate when I ever possible, I tend to be drawn to projects that are tedious and time consuming. I appreciate the discipline required to complete such projects. I publish my own books and zines which have been well received. I also make my own custom labels and stickers for a variety of uses. I truly cannot pin point when I actively started writing graffiti. However, I recollect starting writing POKER or POKER-ONE in late 1991 as I found the word "poker" being the most common word seen in Las Vegas.

What has it been like for you living in San Francisco for over the past two decades? Has the changing city affected your presence here?
Honestly I never thought I would have lasted in San Francisco as long as I have. I've now been living in San Francisco for more than half of my life. I moved to San Francisco about a year after graduating high school, with the intention of attending one of the art schools here. I pursued a career in business management instead of focusing on art. I have spent my adult life in San Francisco and it's been amazing to see some of the changes, that being said, it has been very difficult to accept the current state and direction of the city. The cost of living here is unbelievable, and it's near impossible for a great majority of its native residents to remain here. On the other hand, the city still thrives culturally and allows those of us who still remain to rise above and stand out from the cornballs who have decided to come live in San Francisco. The most challenging aspect of being an artist, for me, is having to work a full time job, overtime, or have a second job in order to survive, which means working for someone doing something I am not passionate about, and then barely have enough creative energy left to get projects accomplished after work. 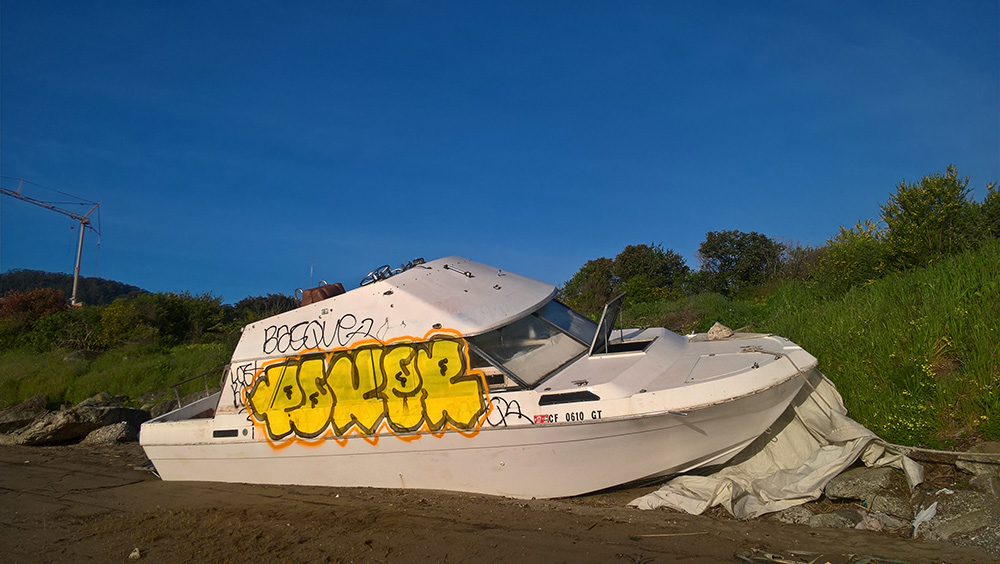 How did you get into print work and publishing?
I can attribute my initial attraction to print making would stem from my upbringing in skateboarding, hip hop and punk. Homemade stickers, zines, t-shirts, and jackets were very common. I learned more from periodicals that books. I took graphic communication classes in high-school and would make paper stickers in my spare time. I now have access to professional printing and binding machines, so I can run with ideas and make them happen. Most of the books have been self-published and sold out, which has been very encouraging. My most recent zine, Spring Break '93, has been well received. I created the zine using photos taken while 4 friends and I hopped freight trains from Las Vegas to California and back. It was spring break, we were seniors in high school, and we were fortunate to bring cameras with us.

Were you actively writing graffiti at this point? How did you get into graffiti?
Yes, I had already been doing graffiti for a couple years before the trip. When I was six, a television channel aired a movie entitled "Dreams Don't Die" and I remember watching it, and being haunted by it although I didn't comprehend what I had seen. Shortly thereafter, my family moved to Las Vegas, where my father was born and raised. A couple blocks from where we first lived was an abandoned water park that I would sneak into. I clearly remember seeing "Bomb Squad" in bubble letters, having a cartoon bomb replace the O. The memories of "Dreams Don't Die" clicked, and vandalizing property was something I began doing. This abandoned waterpark was also my first encounter with skateboarding, as concrete transitions were still in place and it became a destination for skaters. 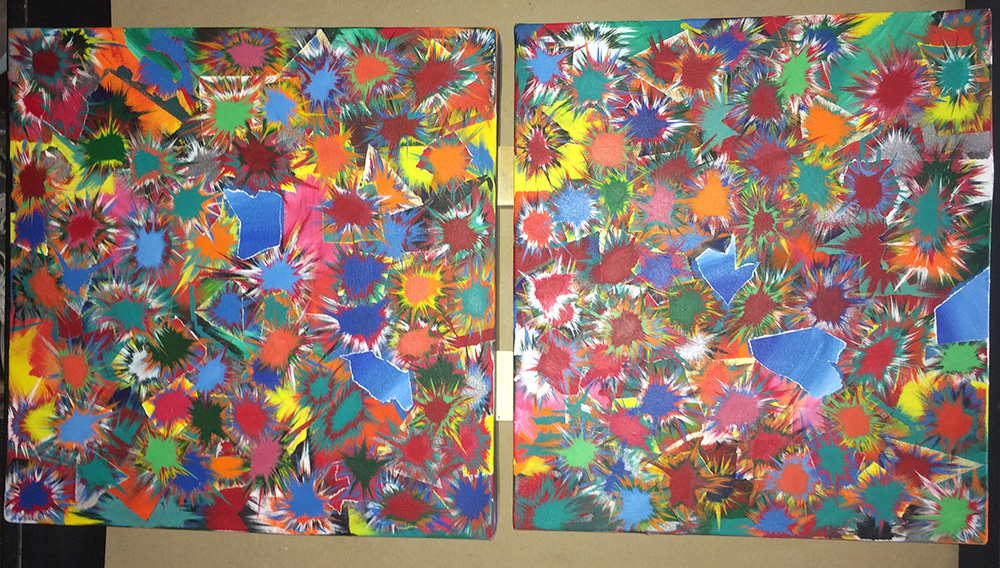 What else was going on in your life around this time? Did your parents have opinions on you writing?
I;m not sure. My parents were more like dysfunctional roommates than anything. Their priorities were partying, drugs, and alcohol. By the second grade, they were leaving me alone to babysit myself for days on end. Some of the most epic parties I will ever have gone to were when I was under the age of ten, because my parents brought me along to them. My parents provided no positive reinforcement. This led to me getting myself in serious trouble and severely injured multiple times. Before my ninth birthday, I was skateboarding and was hit by a car. The impact caused me a compound fracture of my femur, and my knee required reconstructive surgery. Some say that once a bone is broken it will never break again in the same place. however, shortly after I was out of the cast I was riding my bicycle and slipped while turning, the bike landed on my leg, and caused the original break to fracture again. I was home schooled for my fourth and fifth grades. By the sixth grade, my parents and I were living in the Missouri Ave Projects. This is when I was exposed to gang violence and learned about gang graffiti.

Did you join a gang or get jumped into one?
Thankfully no. I was certainly associated with those who were. Gangs ruled the projects and surrounding areas. My homeboy Chuck and I were always getting fucked with for not playing along, and doing our own thing. There wasn't much we could do to counterattack, people knew exactly who we were and where we lived, and these people had guns, it was real shit. At one point, we had learned gang hand styles and ultimately created a fictitious gang. One of the only ways we could retaliate against local gang members was to hack them out and write a 187. We wanted them to think someone was coming after them. It was very short lived and we are pretty fortunate that we weren't ever discovered doing that shit. For me, I continued to paint walls. I eventually started doing bubble letters similar to what I remember seeing being done when I was in elementary school. I thought I was the only one doing it and shortly started finding that I wasn't, and that there were more and more people getting into graffiti, including Chuck. By 1993, we were killing shit in Vegas. Tagging was the new hype and we had already been doing it. It wasn't long before fools were beefing outta control, and retaliation typically would end in violence, which I ended up experiencing on several occasions. 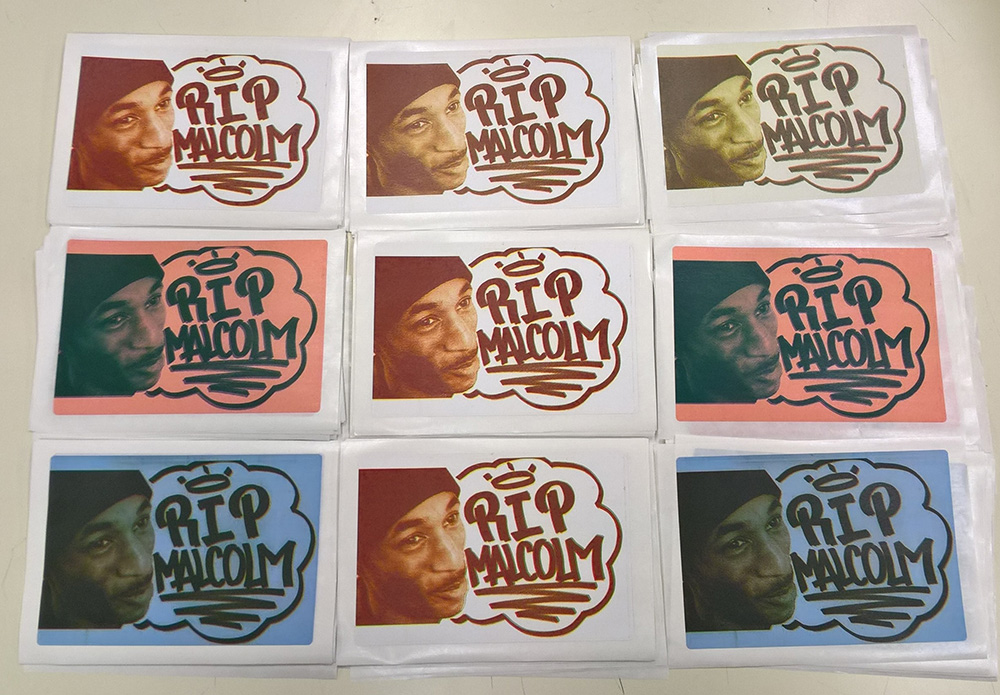 Sounds like it could quickly become much more serious than putting spray can art up on a wall.
Certainly, and there are those who took it a little too serious. Taking it to a level that was going way too far. Serving time for committing art crimes is just as corny as getting into a physical altercation for art beef. For me, graffiti is about being mischievous, finding escape, and having fun. I really miss and appreciate the era of graffiti where people dedicated time practicing to develop a clean and impressive style.

Do you incorporate graffiti in your other art projects?
I try very hard not to. There are found pieces or objects that I hit up. That is as far as I want to take it. I feel graffiti needs to remain on the streets and outside of art galleries. Doing letters for a piece on canvas just isn't my thing, when that happens, it is no longer graffiti, It's a work of art which is graffiti inspired. I have the same views on walls where an artist is given permission to paint a wall. 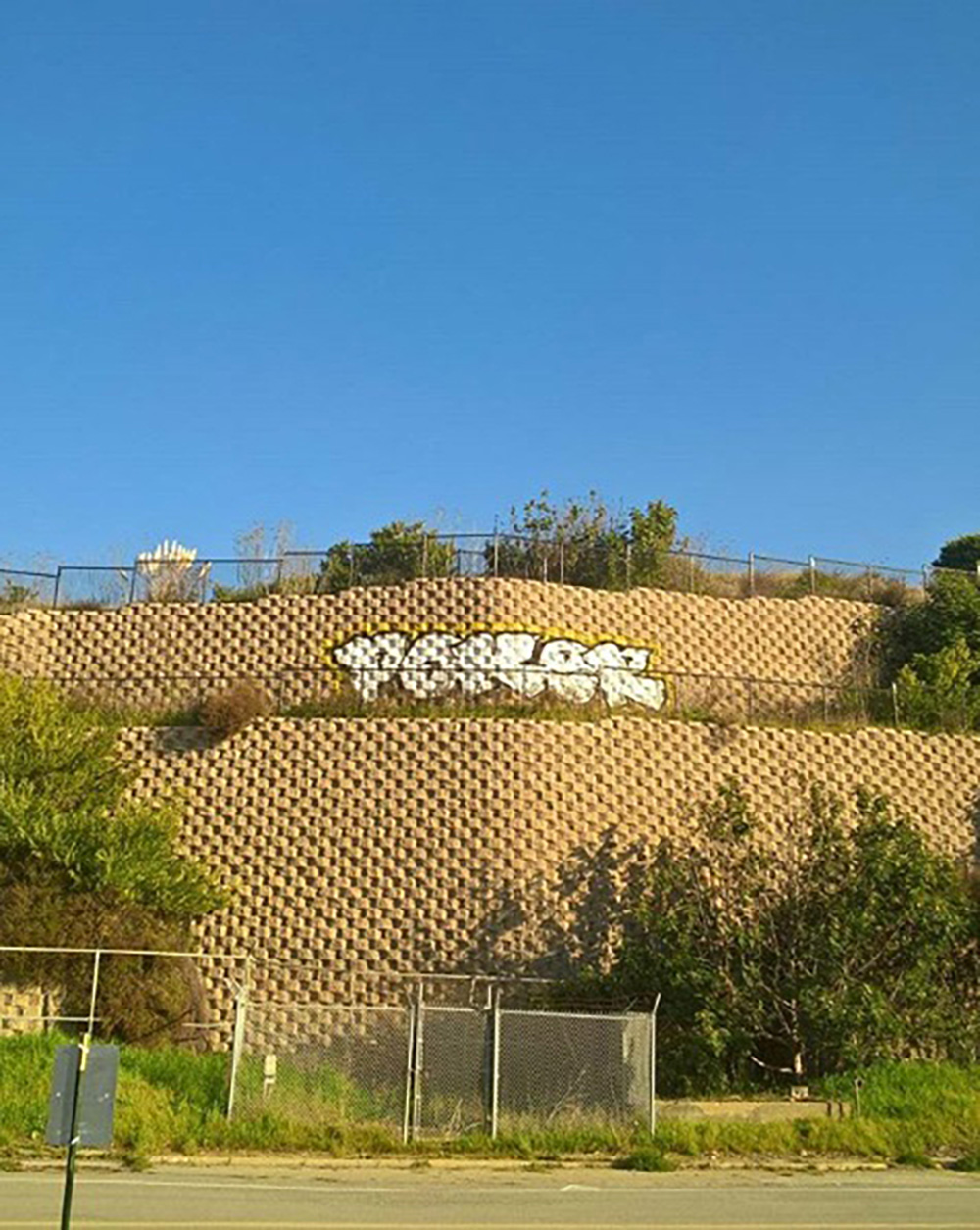 Are the people around you a source of inspiration for the art that you create?
In a way, certainly. There are times that ideas present themselves in conversations or in occurrences that may happen around me. I would say my inspiration comes from the simple desire to impress those who I keep close to me, as well as impressing myself. There's nothing better than seeing a friend or someone I admire getting stoked on something I created. I constantly come up with ideas. The challenge is retaining them and eventually making them a reality.

What are your thoughts on having a web presence?
I don't plan on having a website or personally selling my items online. I previously had been selling my things via Scooters for Peace in Japan. Art Primo SF has been very kind to me, and I have been selling through them. I am thankful for the internet in that it's a great resource for information and providing access to things which were formerly unobtainable. Being raised before the modern internet taught me value. It made me work hard to get anything, and once I did, whatever it may have been, I really appreciated it. Now, people's attention spans are extremely short, everything can be obtained and consumed for instant gratification, and it's difficult to see anything being appreciated anymore. Most just want the next big shiny thing, until another big shiny thing gets their attention. I guess I just come from a time that you had to really work to get whatever you thought was cool, and when you did, you greatly appreciated it. It gave you a sense of pride, which I don't think most are feeling these days unless it comes from the click of a mouse. I would like to keep things as analog as possible for as long as I can.