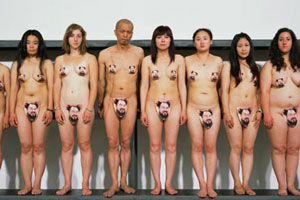 When artist Ai Weiwei disappeared, supporters made online appeals for his return. When authorities handed him a £1.5m tax bill, they sent money to help pay it. And now that he faces an investigation for spreading pornography – his admirers have stripped off. Internet users began tweeting their nude photographs after Ai announced that authorities had questioned his cameraman over pictures which showed the artist and four women naked. 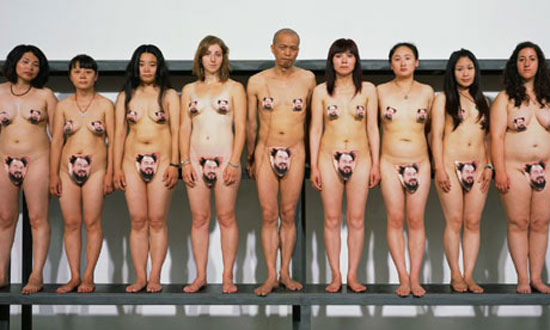 Many Chinese contemporary artists have taken pictures of themselves without clothes, and the pictures of Ai that have emerged so far do not appear sexually charged. Some suspect that it may be an attempt by the authorities to smear the artist, whose 81-day detention this spring caused international outrage.

Officials accused him of economic crimes but supporters say the authorities are engaged in a vendetta because of Ai's social and political activism and criticism of the government.

While a couple of internet users tweeted full-frontal shots, others have come up with more decorous – and ingenious – variations on the theme. Some posted pictures of themselves as babies; one photo shows a row of nine unclothed women and one man – with images of Ai's head superimposed over their genitals and nipples.

Li Tiantian, a Shanghai lawyer who was herself detained earlier this year, appears partially concealed by a picture of a "grass mud horse", a creature invented by internet users to mock censors; its name is a homonym for a graphic curse.

"It is an expression of support for Ai Weiwei and scorn to the Chinese government. It shows our attitude and anger towards the government's behaviour," she said.

"We are simply using an eyecatching way to attract people's attention. There are so many pornography websites in China: they don't regulate them, yet say that this is spreading pornography."

Wen Yunchao, a blogger in Hong Kong who posted two nude photographs of himself, told Reuters: "This is a matter that has made many people very indignant. The interpretation of people's naked bodies in itself is an individual freedom and a form of creative freedom. Also, we don't see any pornographic elements in [Ai's] photographs. So we are using this extreme method to express our protest."

Zhao Zhao, the videographer who took the original pictures of Ai last year, told Reuters that Beijing police interrogated him about them for about four hours, telling him the photographs were obscene.

Ai told the news agency that police had also questioned him about the pictures. He said they did not have a hidden political meaning and were not meant to criticise the government, but noted that authorities might nonetheless see them as a "rebellious act".

Separately, the artist has encouraged supporters to call bloggers and commentators he described as leaders of the "50 cent" – pro-government – internet users, tweeting their phone numbers.

One of them, Wang Wen, told the Guardian he had received between 100 and 200 calls and innumerable messages since Sunday and that another man had received about 1,000 calls. He complained that posting the number was not fair, but refused to comment further.