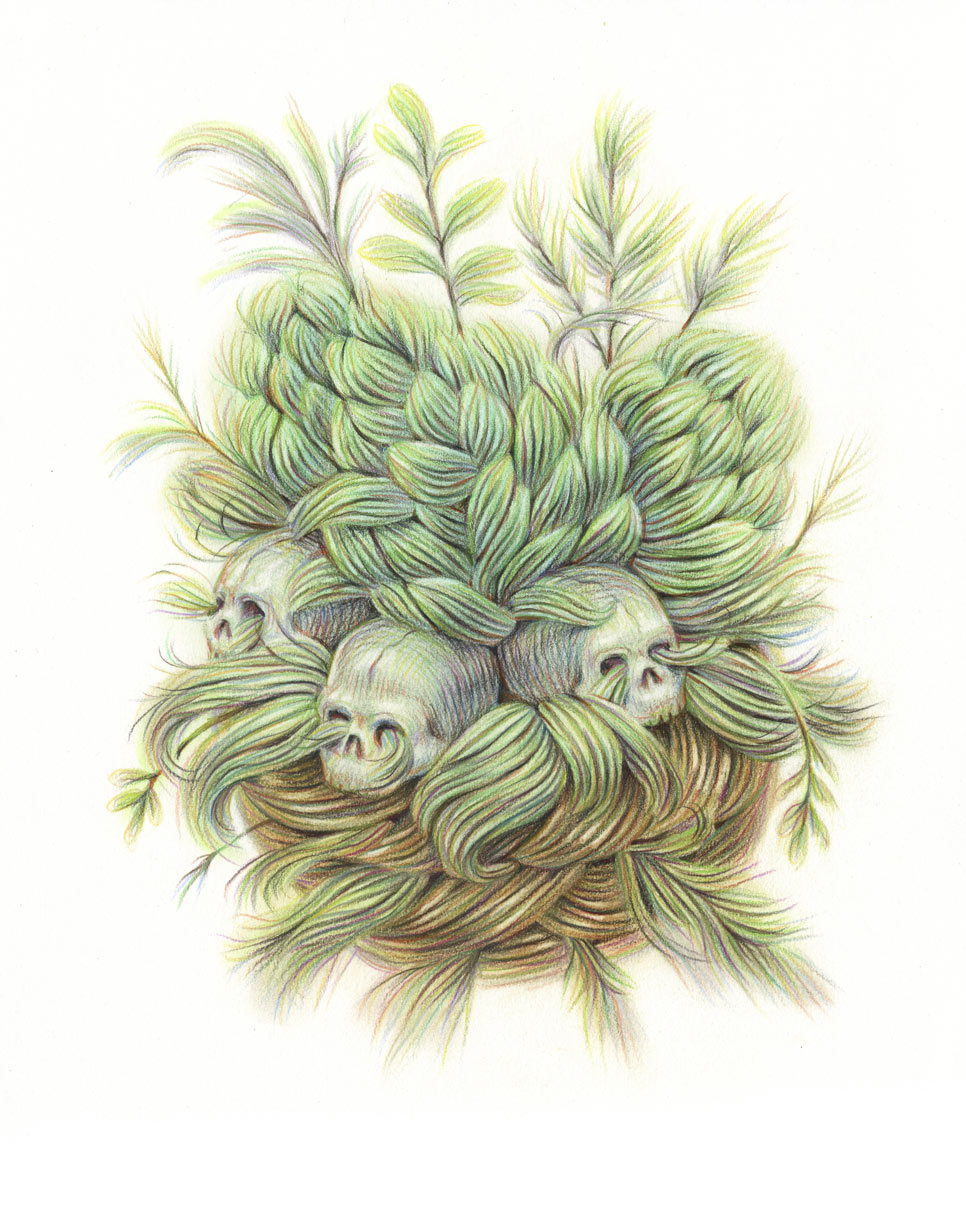 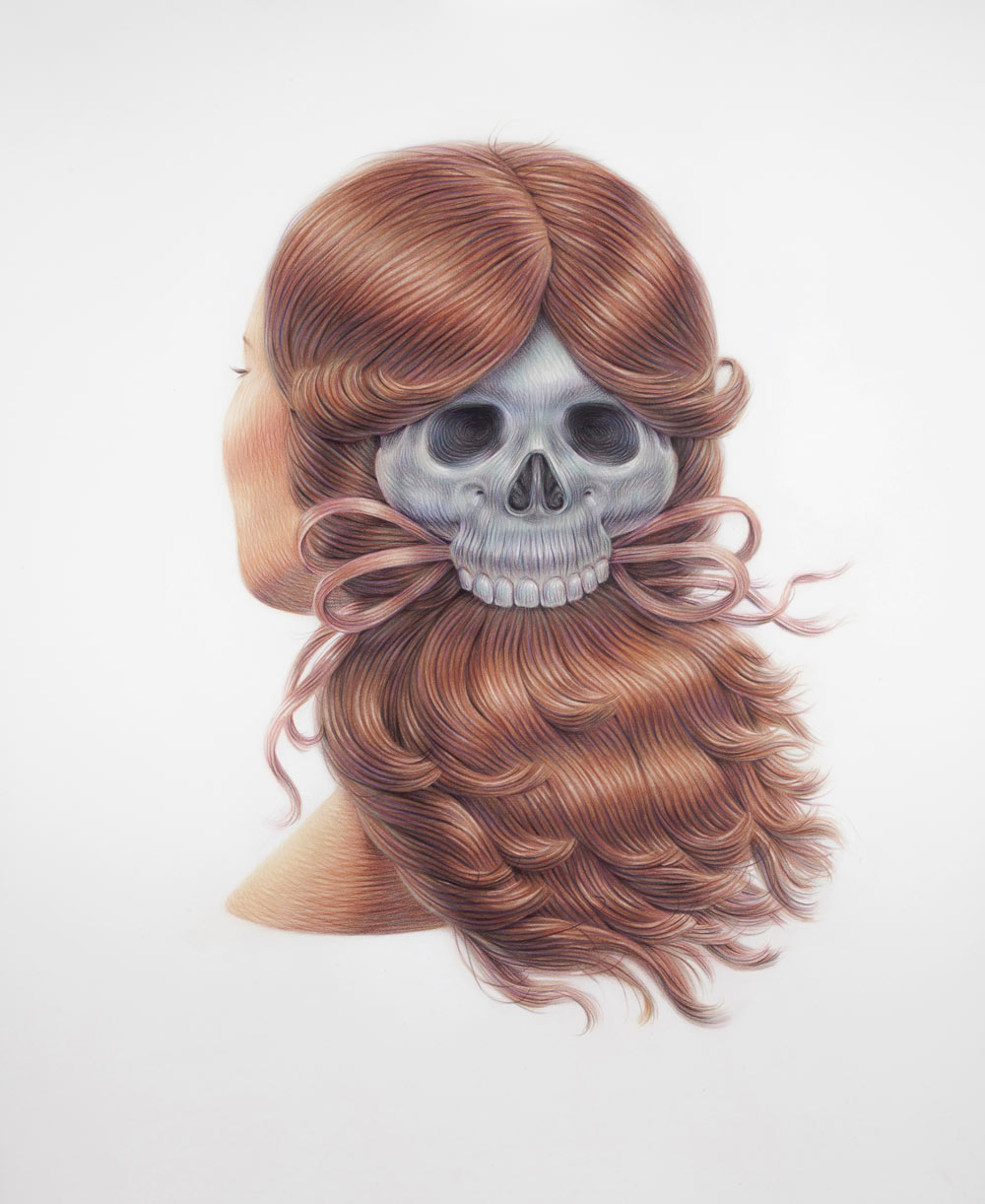 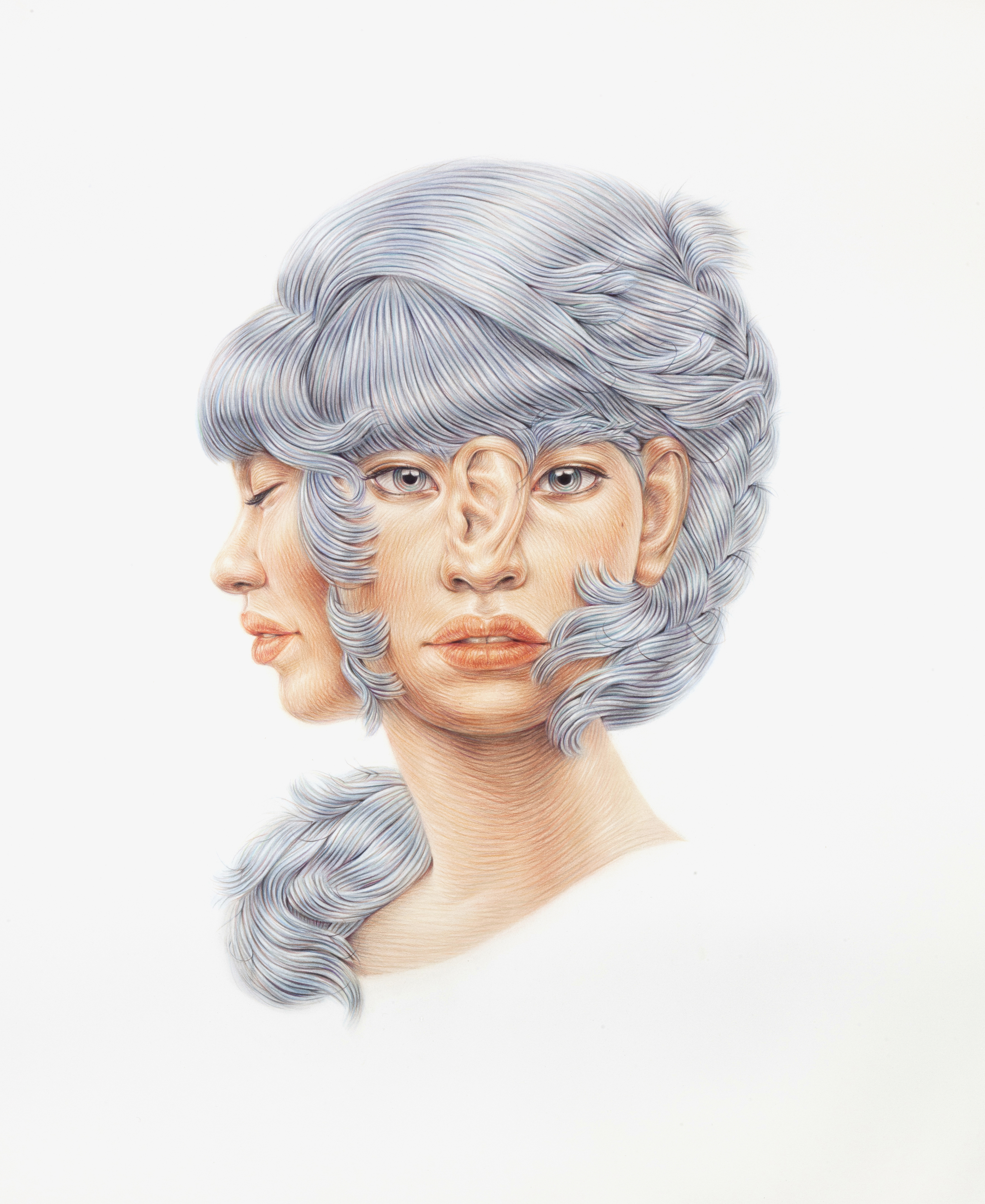 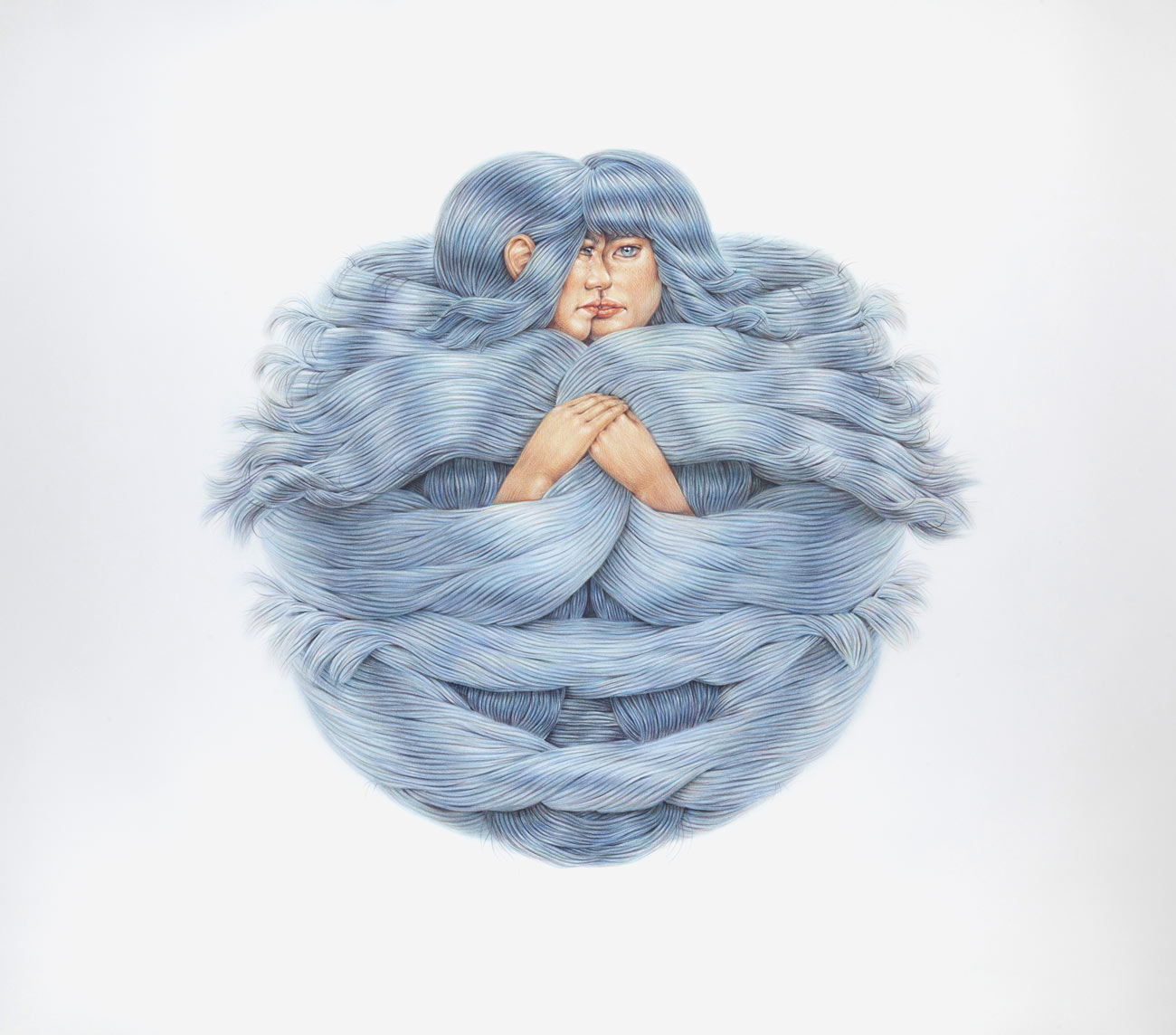 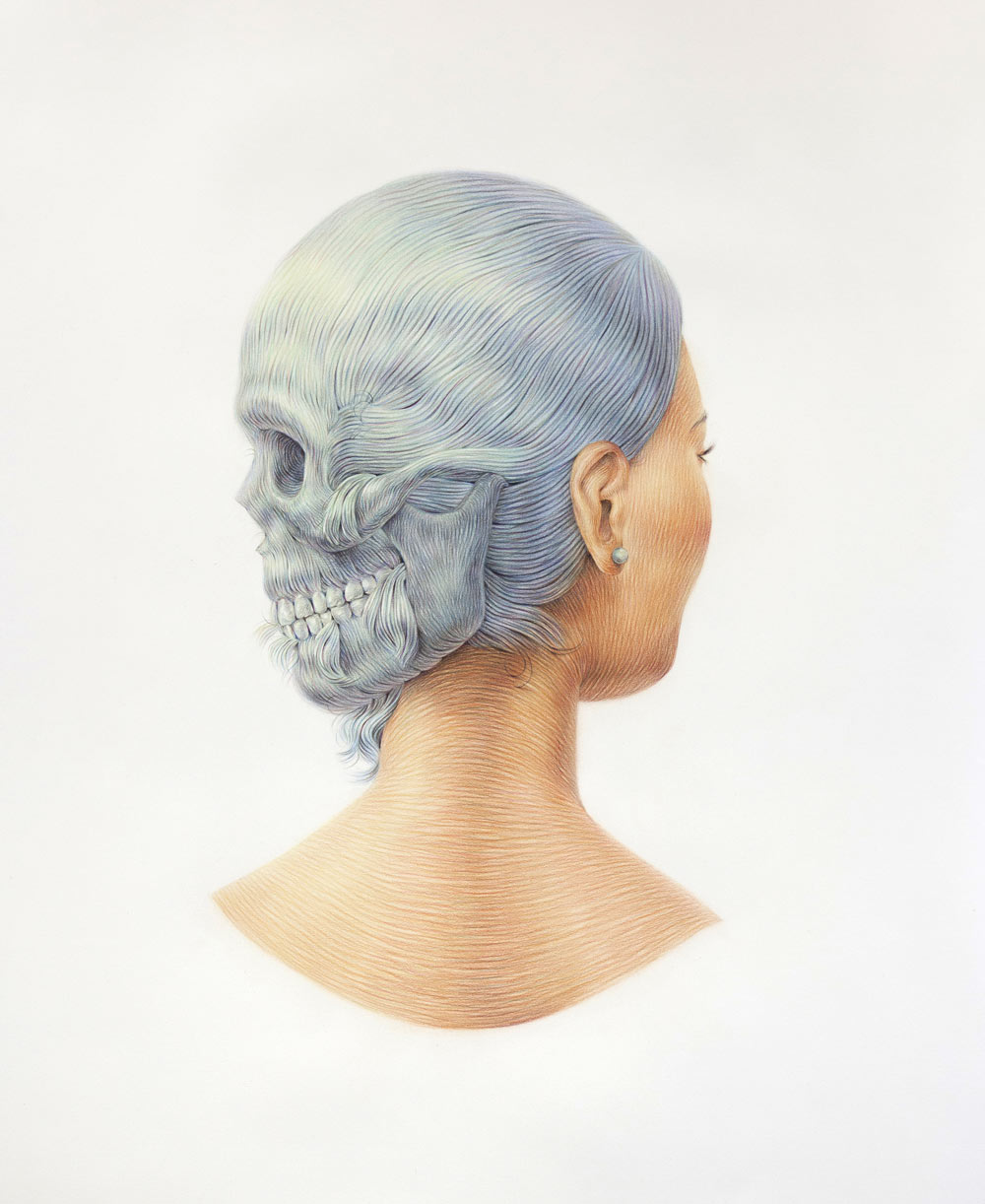 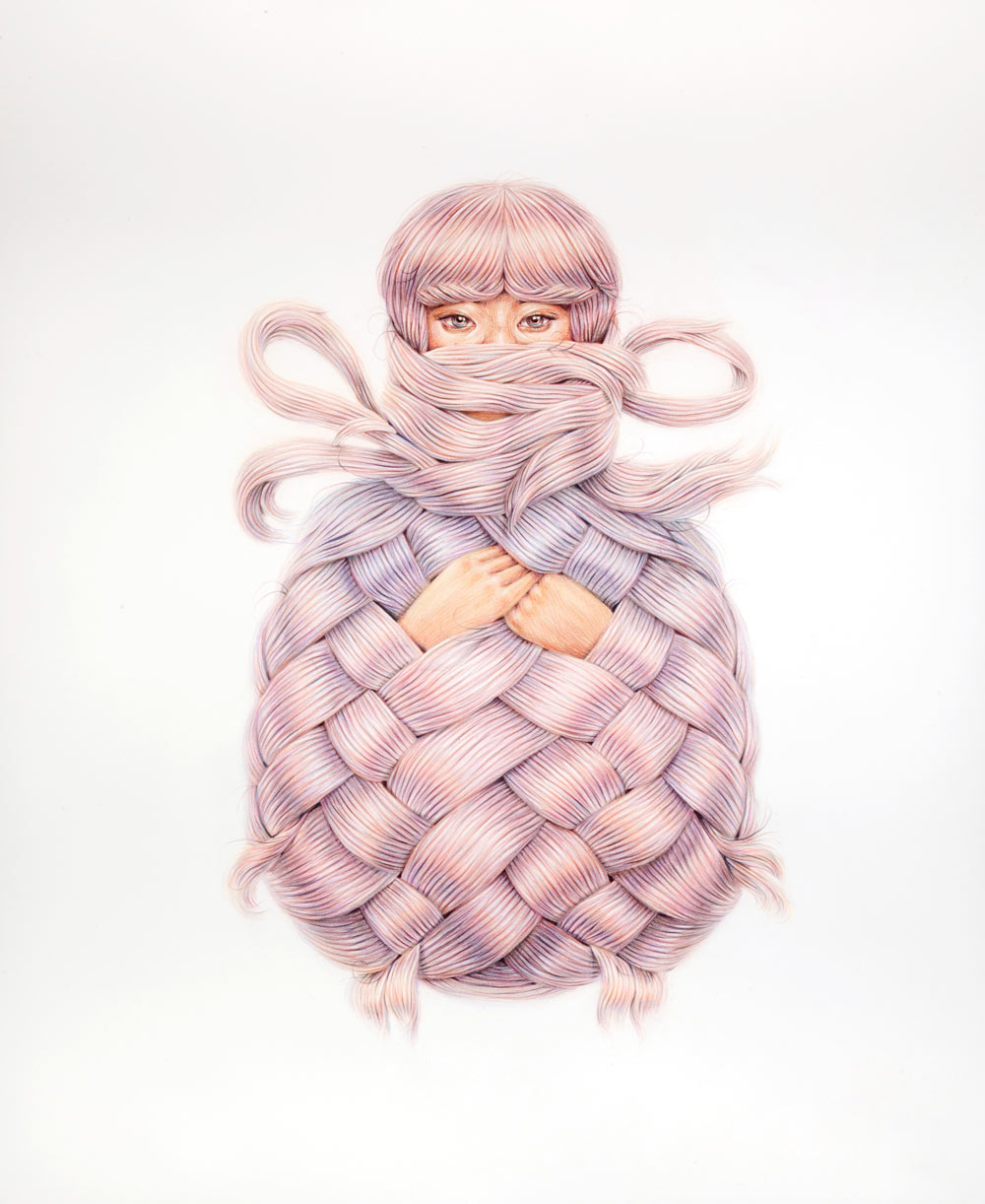 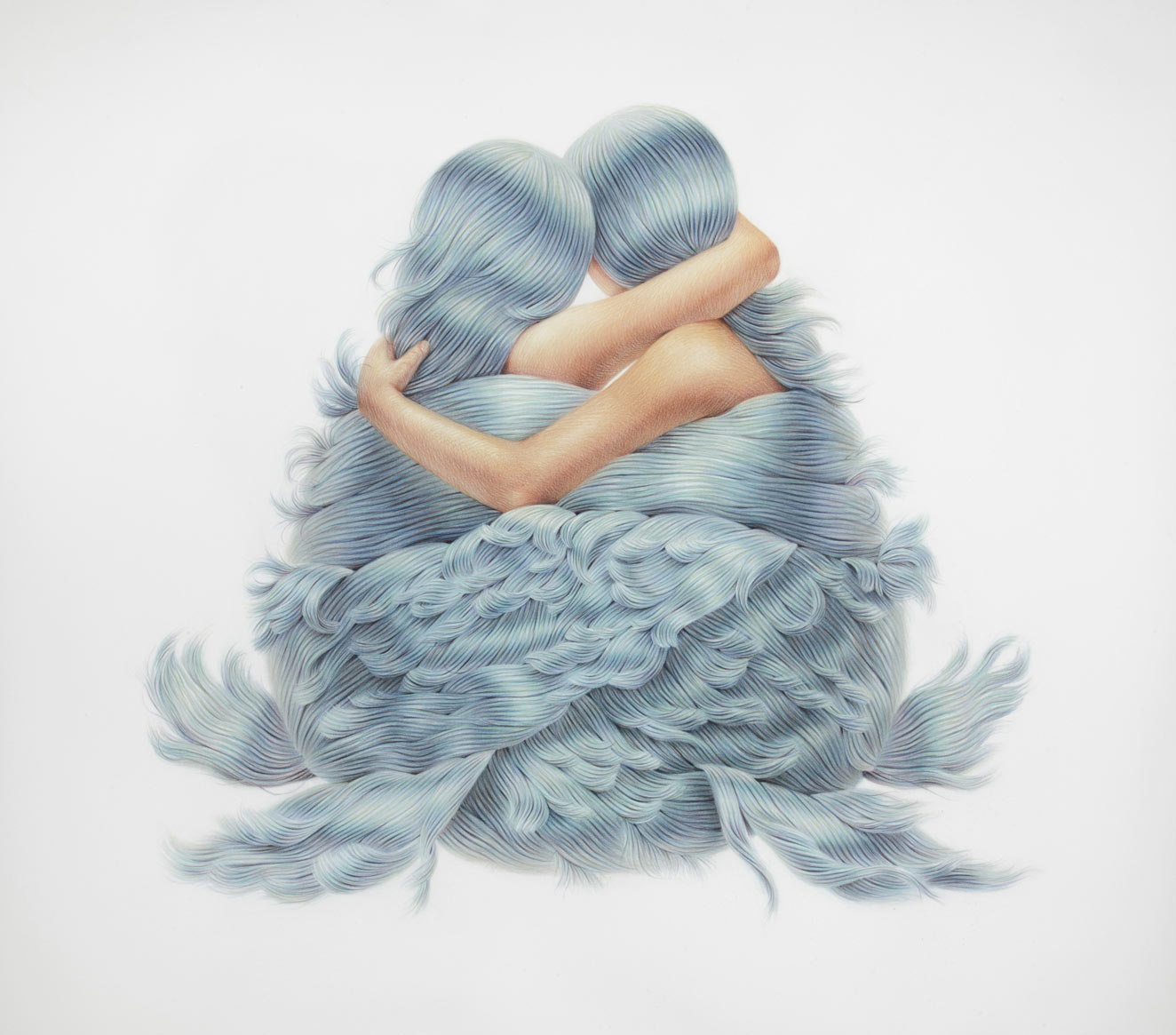 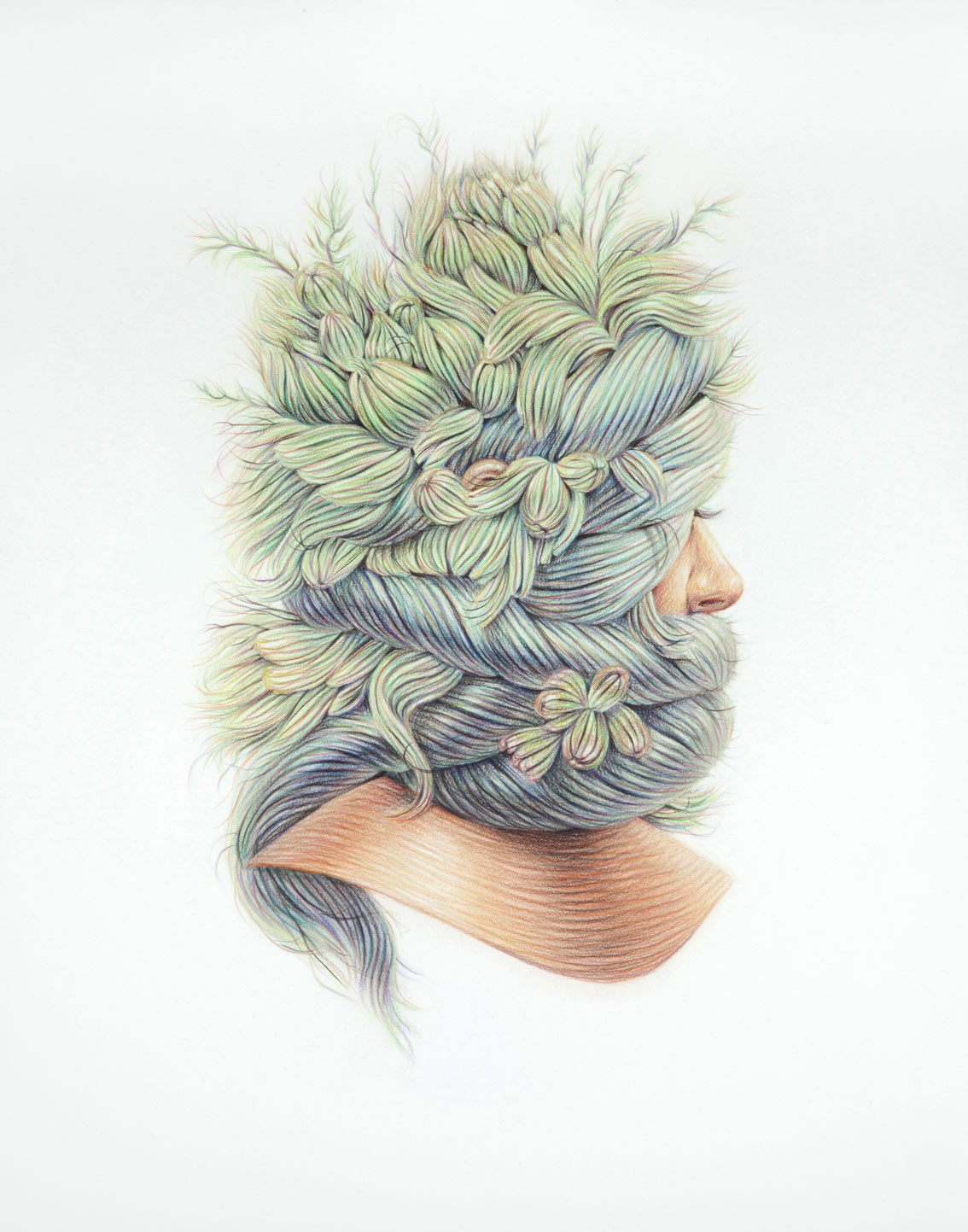 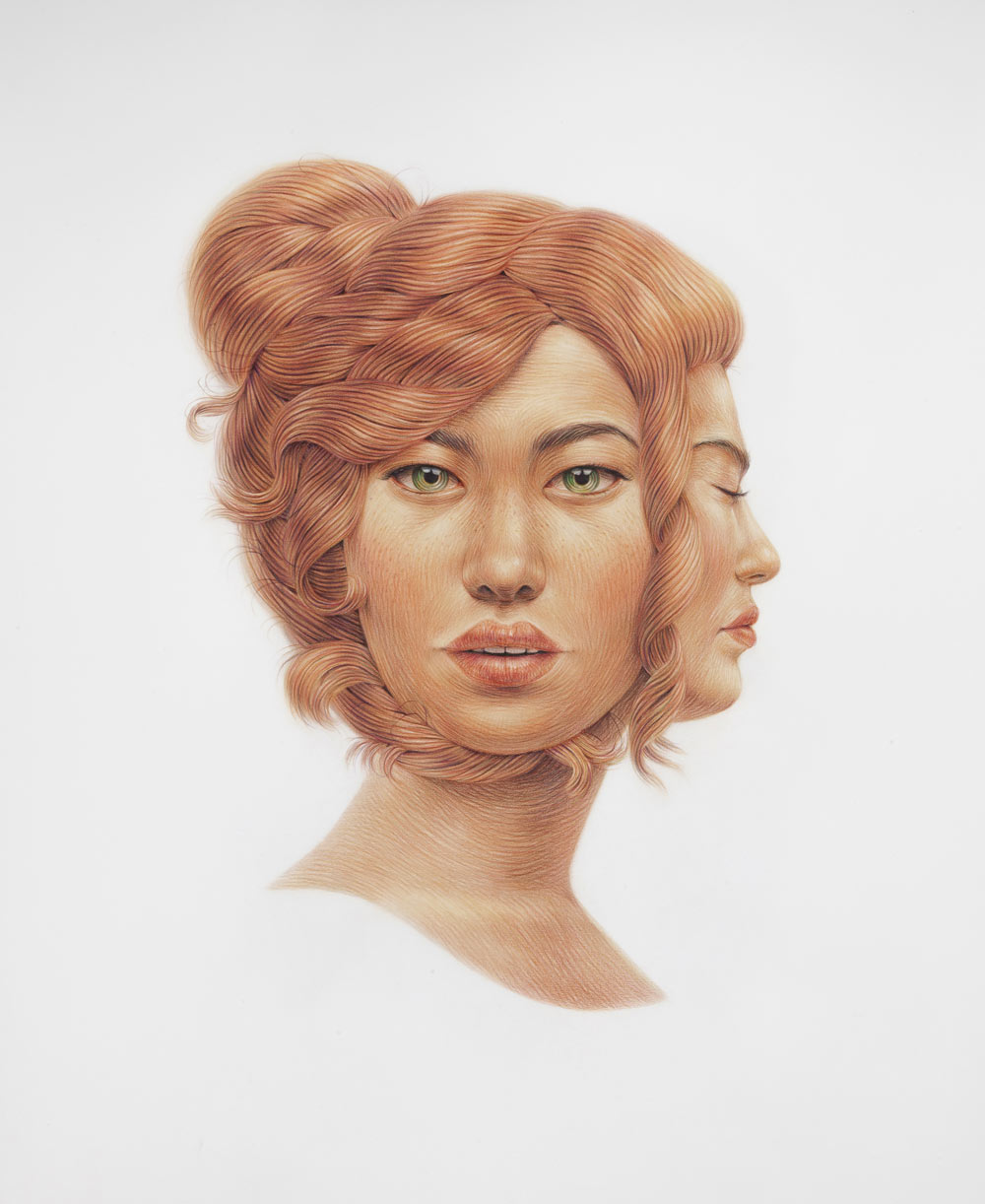 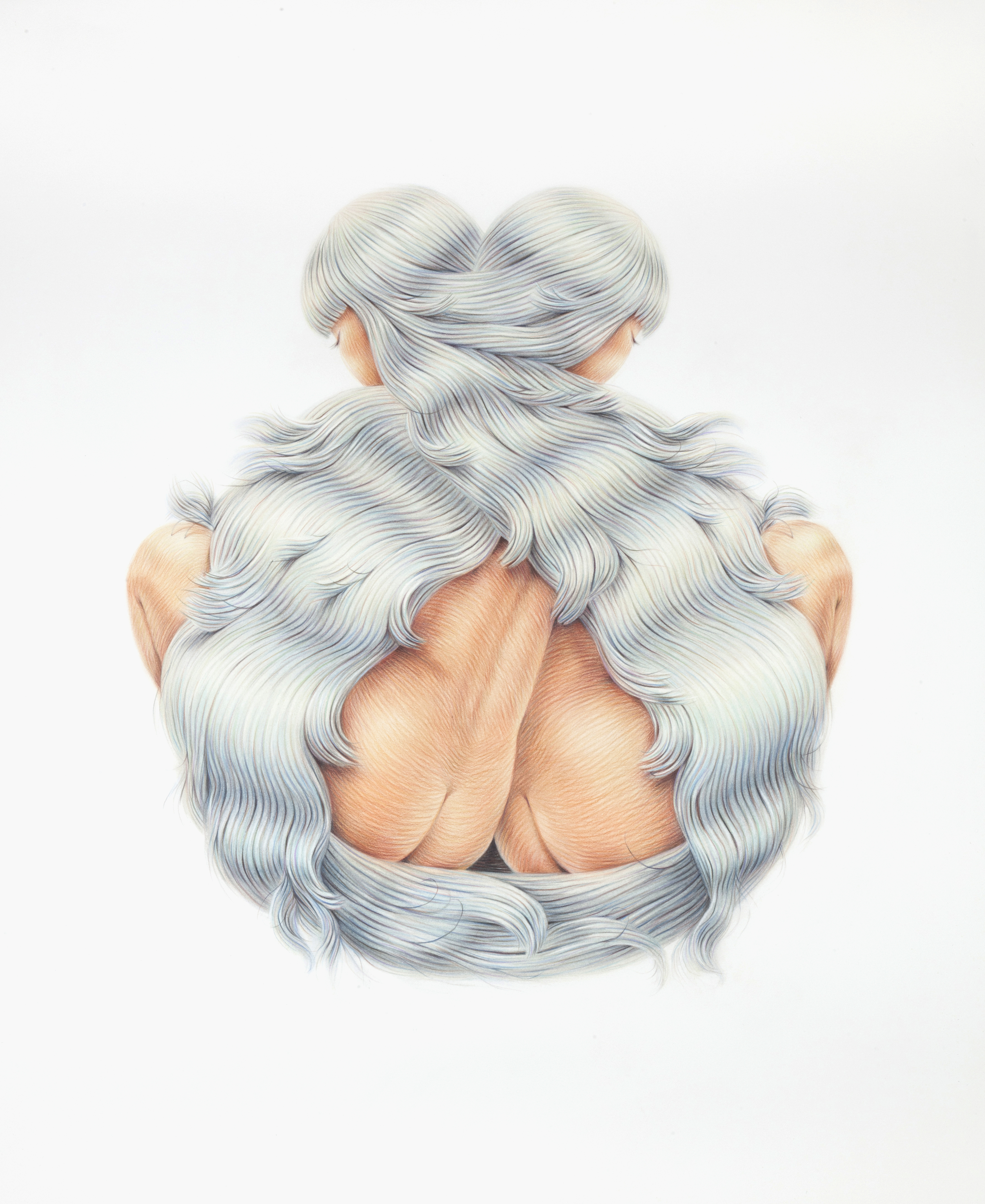 Winnie Truong draws hair better than anyone, and her subjects are soulful and strange, but the way we categorize them in our minds says more about us than them. They are otherworldly and they seem comfortable being hairy, so who are we to judge? WInnie is featured in our May, 2014 issue and her "Rites of Passage" exhibition at Galleri Benoni in Denmark just closed this week!

Winnie Truong draws hair better than anyone, and her subjects are soulful and strange, but the way we categorize them in our minds says more about us than them. They are otherworldly and they seem comfortable being hairy, so who are we to judge? Winnie is featured in our May, 2014 issue and her "Rites of Passage" exhibition at Galleri Benoni in Denmark just closed this week!

The following is an excerpt from Winnie's interview in our May, 2014 issue:

Kristin Farr: Do your figures have exaggerated body hair or something more supernatural? How about the facial lines—is it hair, or a cross-hatching style? Sometimes it looks like grown-out peach fuzz.
Winnie Truong: I have always envisioned my figures existing on the fringe of our own reality; just beyond what we familiarize ourselves with as the biological norm while still echoing elements of our world… so there is definitely a sci-fi element I won’t discourage. As far as faces and flesh, I made the decision very early on to maintain the consistency of texture and line, and allow that ambiguity between flesh and hair to persist in the work. The drawing style definitely lends itself to the peach fuzziness or vibration of line and color. It’s essentially a series of cross-hatched lines to create the effect of optical mixing, with layers of different strokes of color that blend when viewed from a distance.

What do you like about the beautiful/grotesque juxtaposition?
I am still very interested in creating work that straddles that subliminal space between hair as beautiful and hair as something abject and grotesque. That ambiguity fascinates me, and I think it gets back to the core of our relationship with hair and how we react to it when it grows in familiar and acceptable places, and then its ability to repulse when it diverges from those norms. Often it only takes the weight of one coarse and curly hair to tip that scale.

Would you say the hair has been growing longer, stronger and more enveloping recently?
In my previous show A Slow Immersion in Toronto, I had blankets and wrappings of hair as both the subject and a metaphor for the ongoing relationship with drawing it in the studio. Today, I see my drawings as an equal balance of visual and visceral experience. Drawing is both a final product on paper and an immersive physical activity that takes place in my studio during the time of production. However, with the time I spend drawing, I often find my free moments of thought and memory are overshadowed by automatic drawing on the back of my eyelids… similar to the “Tetris Effect” but instead of a mental puzzle of falling blocks and disappearing lines, I am drawing wisps and braids in my mind before I fall asleep.

Tell me about how you make under drawings and why you began working that way.
For the large-scale pieces, it’s essential for me to make an under drawing from colored chalk pastels in the preliminary stages so I can block out major areas of light, shadow and color. It keeps me available to make adjustments and grand gestures early on without being held back by making too many precious little marks while the work is still in development. Even though most of the chalk is brushed or smudged away when the drawing is done, it leaves behind general areas of softness that I really enjoy.

Read the full interview in our May, 2014 issue, available here.

Subscribe to Juxtapoz Magazine, we'll ship you a copy of the current issue FREE.

On Winnie Truong's "Rites of Passage" at Gallery Benoni:

"As we pass through life, we go through traditional and invisible landmarks of transformation. Proceeding from birth to adolescence, marriage and then death, there are significant occasions marked by physical change and common ritual. However for the times in-between where the shift is more abstract as an idea, identity and feeling, these events go unseen and without custom or celebration.

Rites of Passage is an exhibition that explores the transition from youth to oblivion. Truong's incredibly detailed drawings playfully imagine the feeling of age and the precariousness of time as a surface extension of character. The subjects in her portraits are poised for no specific occasion, neither celebrating nor lamenting their experience of humanity and death. With the experience of getting older, personality and psyche are in a state of flux, making the feelings of growth and decay simultaneous and ambiguous. The rites of passage then become unclear, leaving mortality to be donned and adorned by these characters merely as ornament.

All at once beautiful and grotesque, familiar and discomforting; Truong's drawings question and subvert our heavily coded ideas of beauty and the status quo while inspiring the imagination."