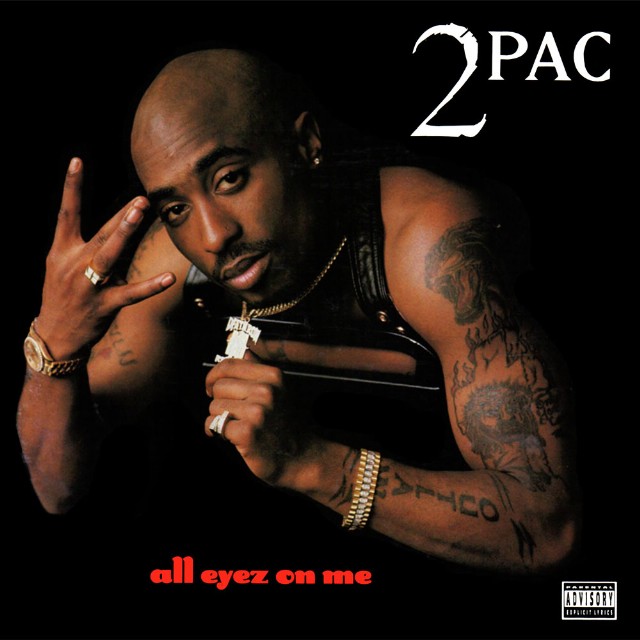 It’s tough to dissociate 2Pac's All Eyez on Me from the pre-streaming era, when an album felt like a friend you could unravel with on an afternoon—or in the case of Pac's 1996 post-prison magnum opus, an accomplice who'd help a 14-year-old you steal your parent's car in the middle of a weeknight to visit a boyfriend. If you were patient, a record left you with a story that made you feel something.

The story of All Eyez on Me began on October 12, 1995. 2Pac, at the peak of fame and notoriety, had spent the better part of that year in prison for a sexual abuse conviction before “selling his soul to the devil”—a.k.a. Suge Knight, who, in exchange for a three-album, $3.5 million deal with Death Row, posted 2Pac's $1.4 million bail.

2Pac wrote and recorded the entire 27-track album during a frenzied 14-day period that, after a quick pit stop at El Pollo Loco, began the same night he walked out of Clinton Correctional Facility and slid into his new warden's white limo.

The result? A venom-spitting, double-disc album featuring one of the most iconic songs about California ever made, a 132-minute war cry directed at Biggie and Bad Boy, one of the highest-selling rap albums of all-time, and an urgent portrait of the very dark side of a brilliant artist approaching the violent end of his short life. The album dropped in early 1996, and 2Pac would be murdered that fall.

It's hard to think of an image that better represents the man at that explosive moment than the cover of All Eyez on Me shot by Death Row in-house photographer Ken Nahoum, curiously, a white celebrity photographer responsible for some of the rapper's most indelible images. 2Pac dominates the frame, shirtless except for the black leather strap of a Jean Paul Gaultier vest—a noticeable upgrade from his less flashy, pre-prison style that serves as a visual cue for the Thug Life-meets-Mad Max vibe that permeates the video for “California Love.” Tattoos and jewelry on full display, he reps West Coast as he offers up his Death Row pendant to the camera like a cat delivering a hummingbird to its owner's doorstep. He stares into the camera with defiance. All eyes are on him—and he knows it.

But the eyes tell another story, too. Beneath the swagger lies a soulfulness reminiscent of this complex man, a Black Panther’s son who beefed with C. Dolores Tucker; a Shakespeare-loving, poetry-writing ballet dancer who penned the most vitriolic dis track of all time, an author of feminist anthems convicted of sexual abuse.

That the face of one of the most defining moments in West Coast rap history was an art school kid from Harlem is particularly ironic, but fitting. 2pac remains a contradictory, polarizing and mesmerizing figure even now—the kind of artist who makes the kind of music, that, 23 years later, inspires rappers and soundtracks joyrides in the burbs.