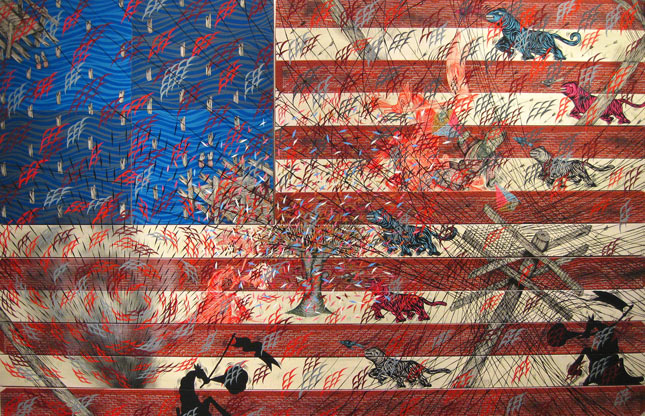 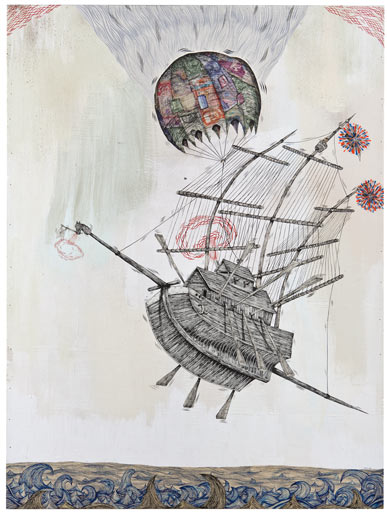 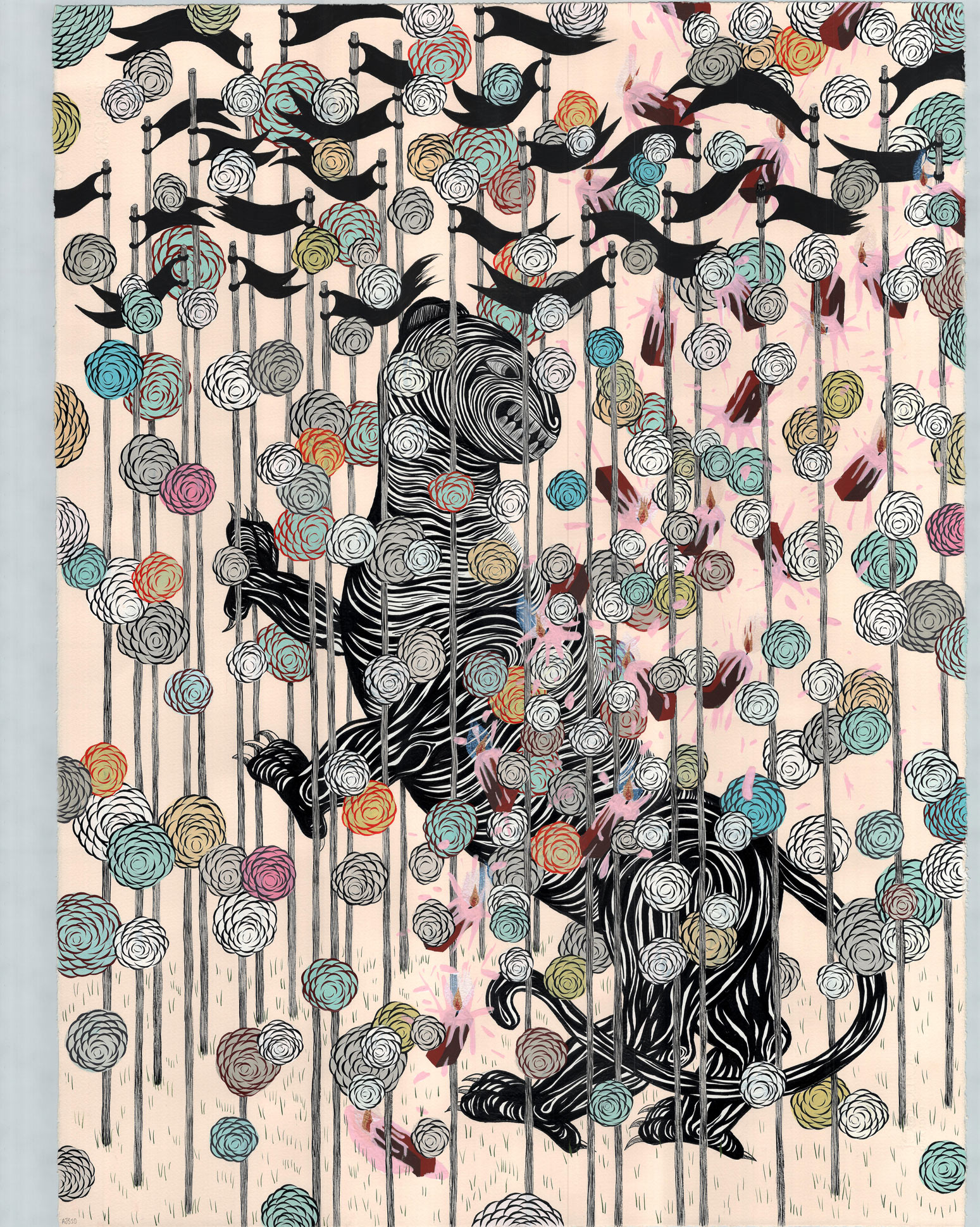 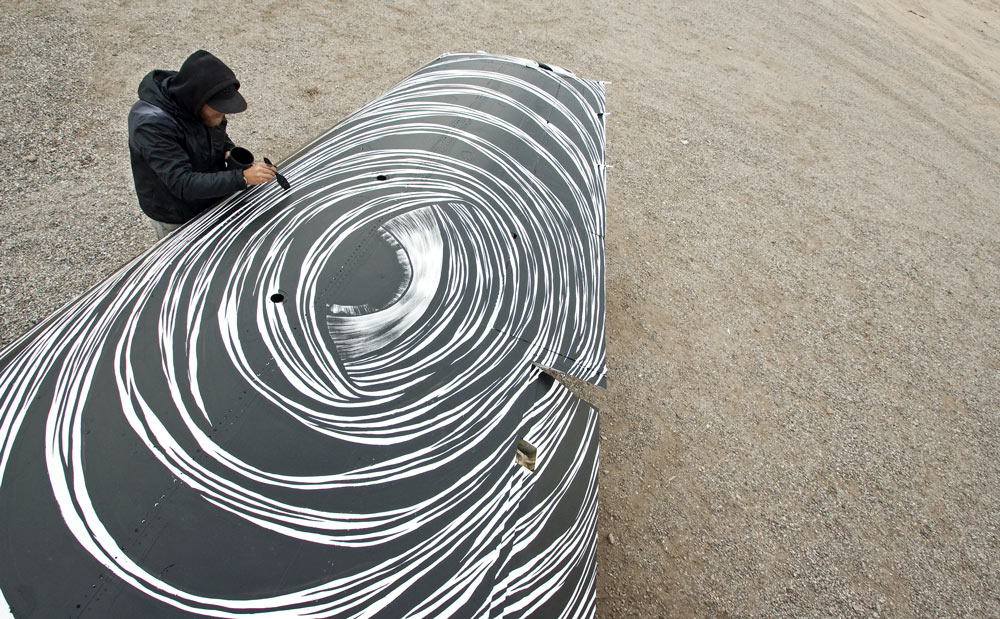 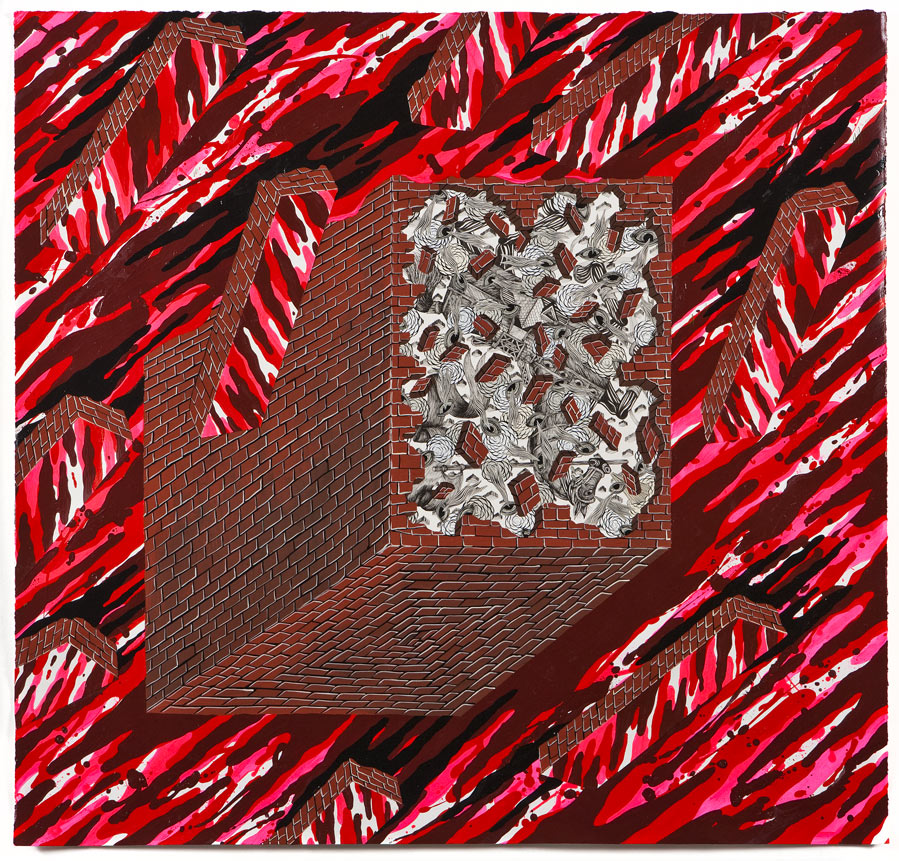 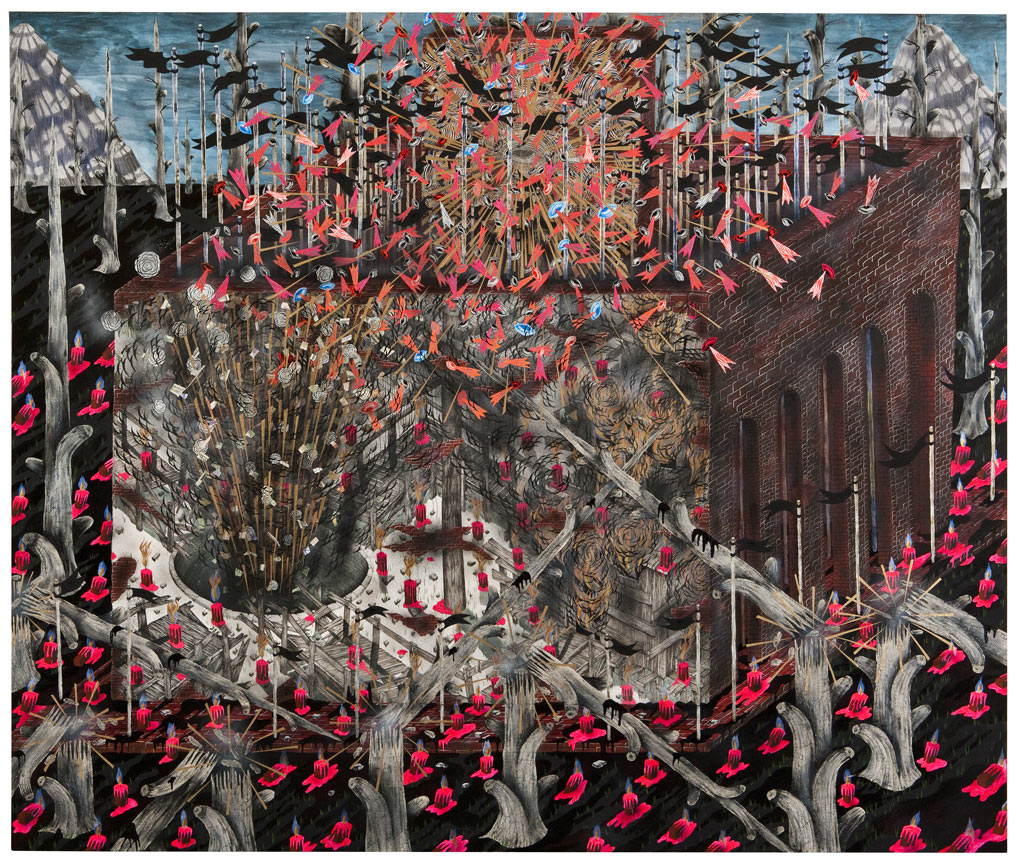 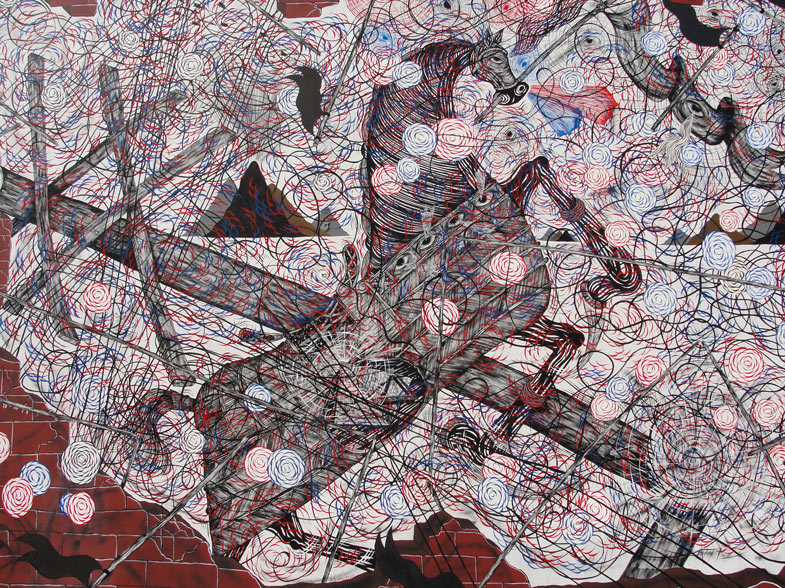 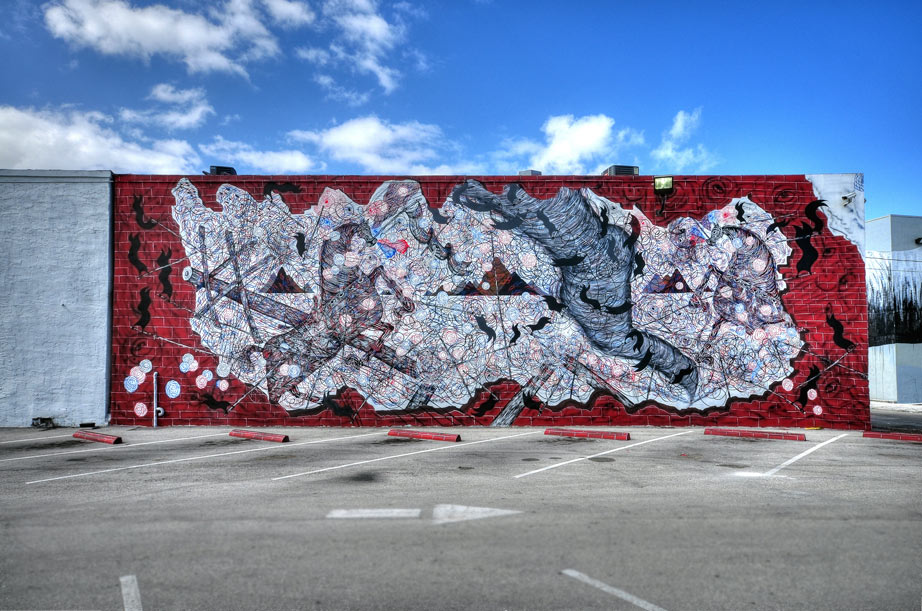 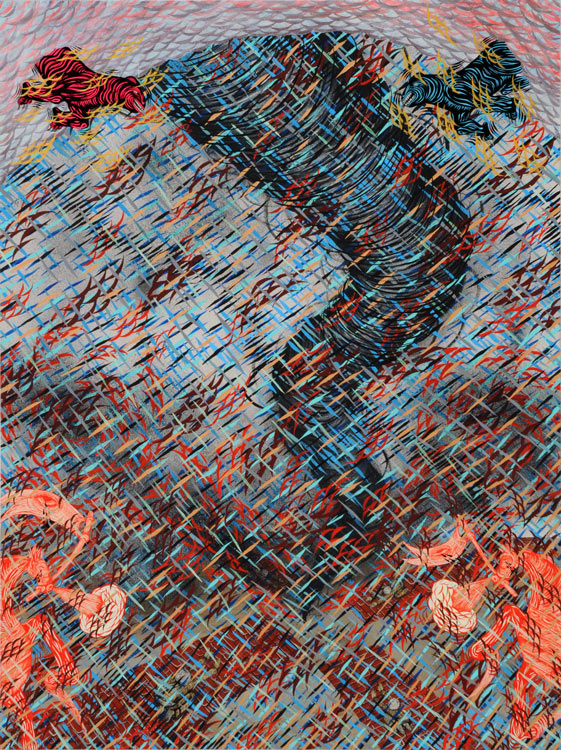 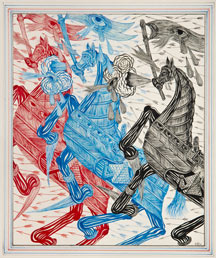 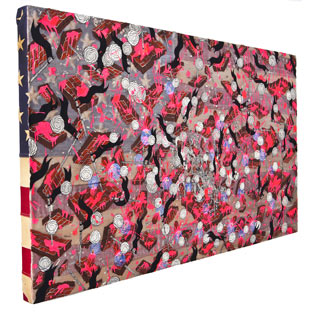 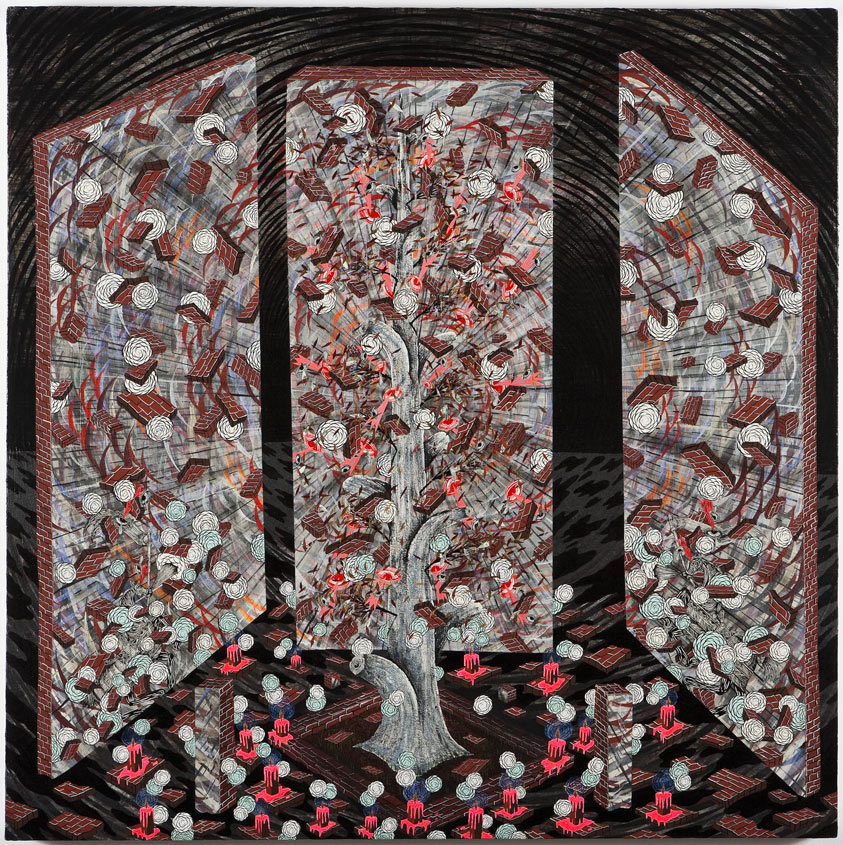 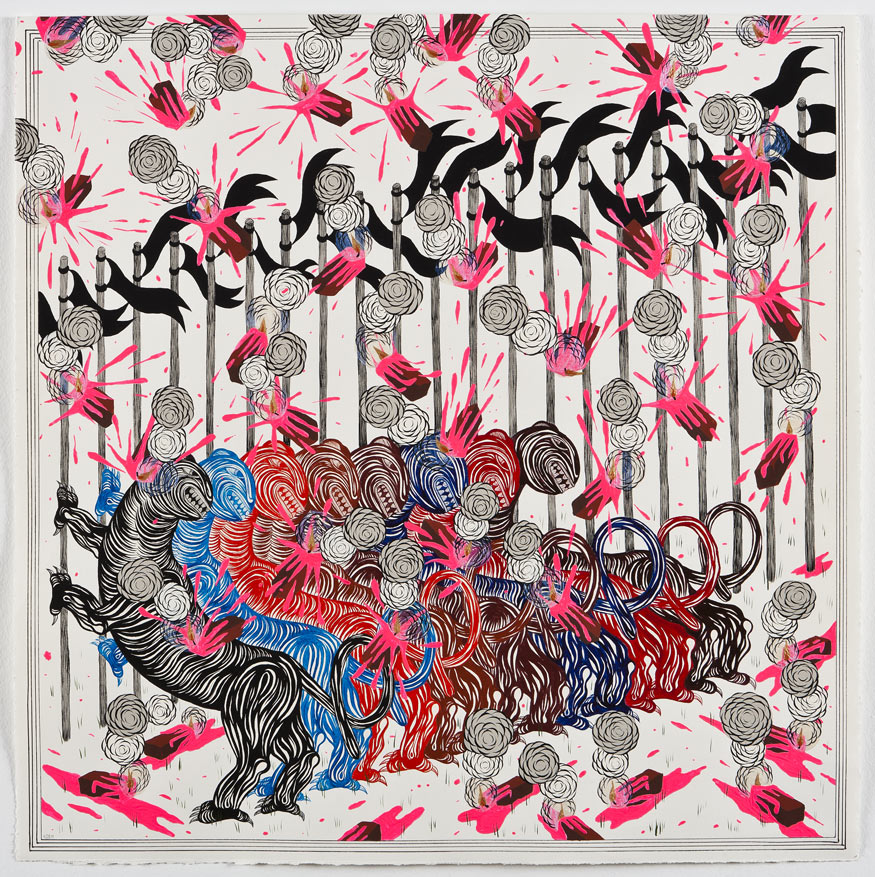 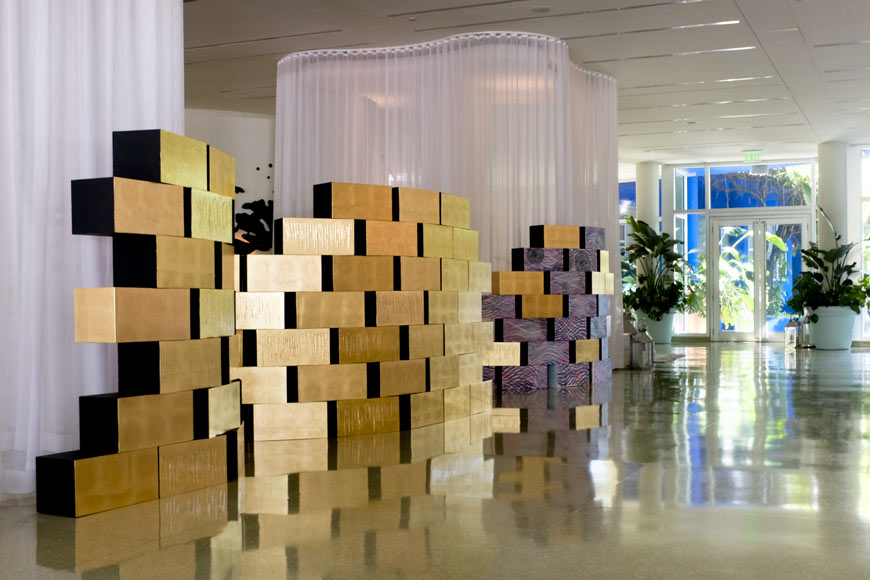 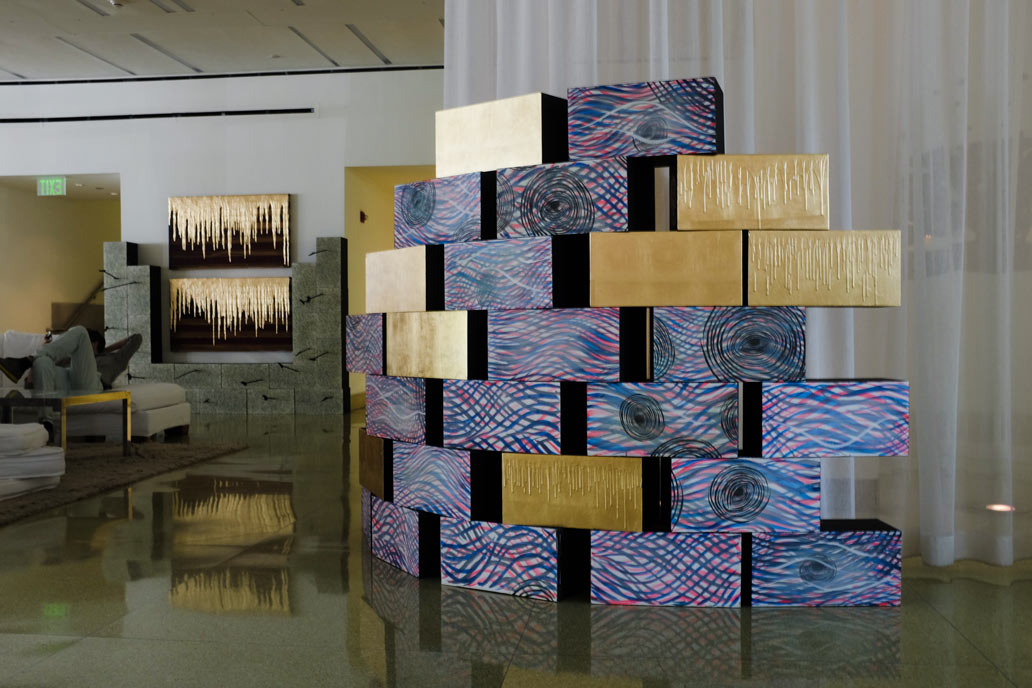 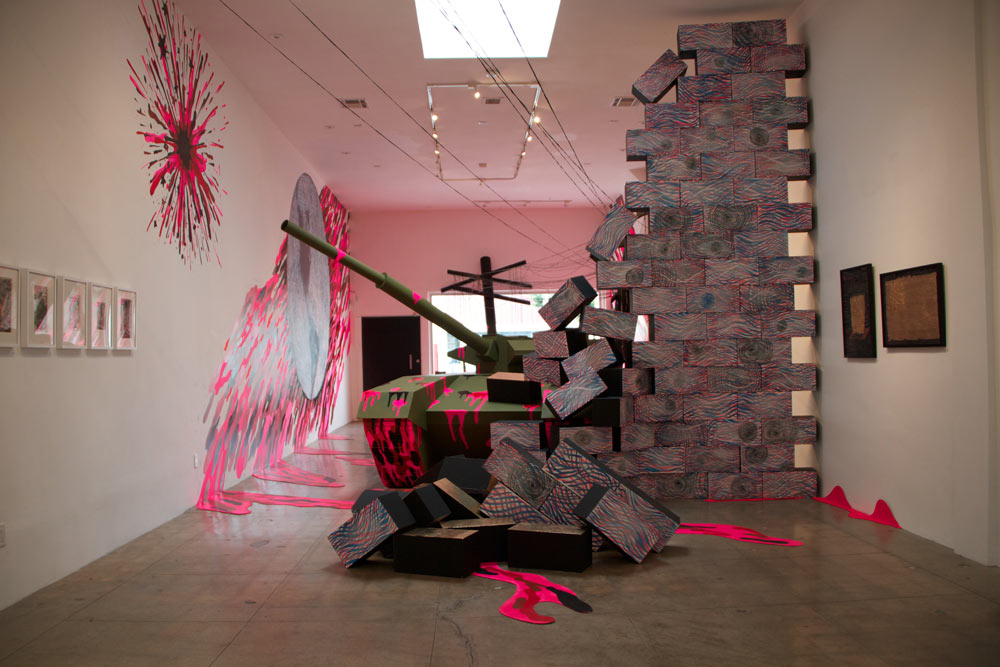 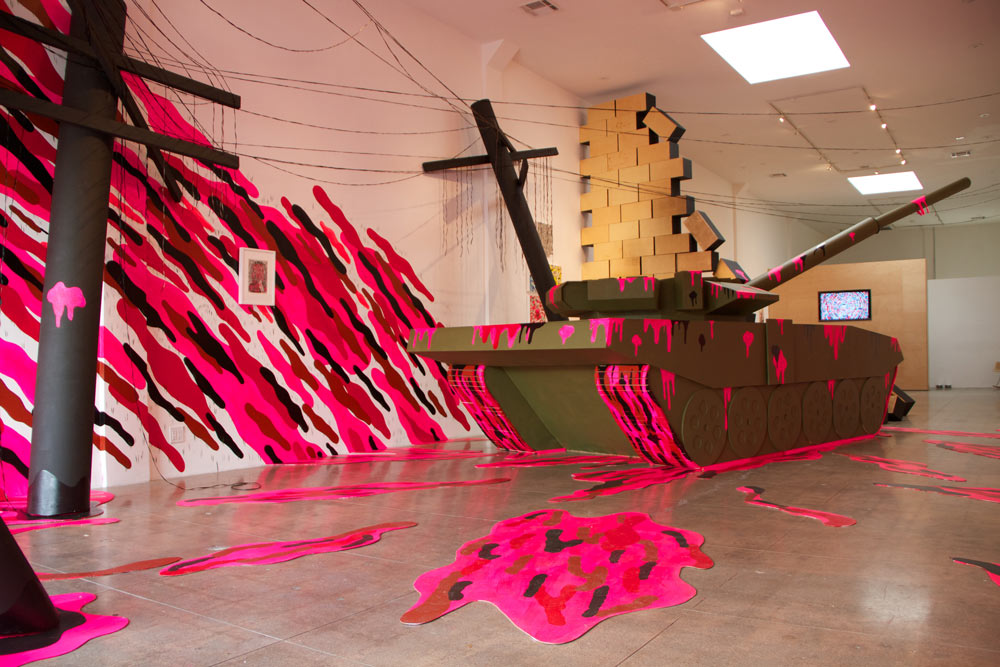 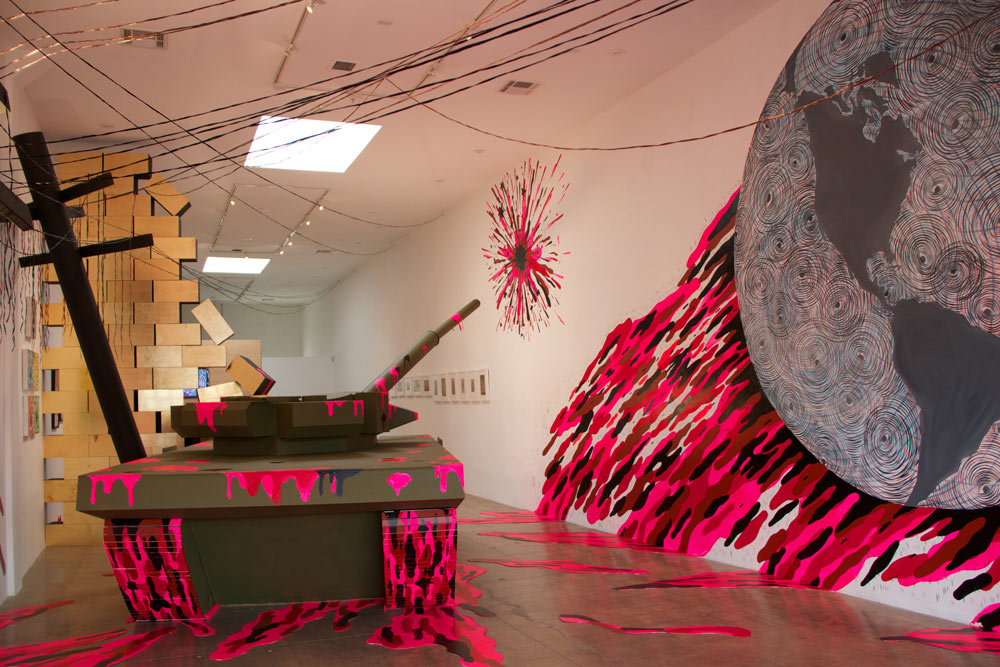 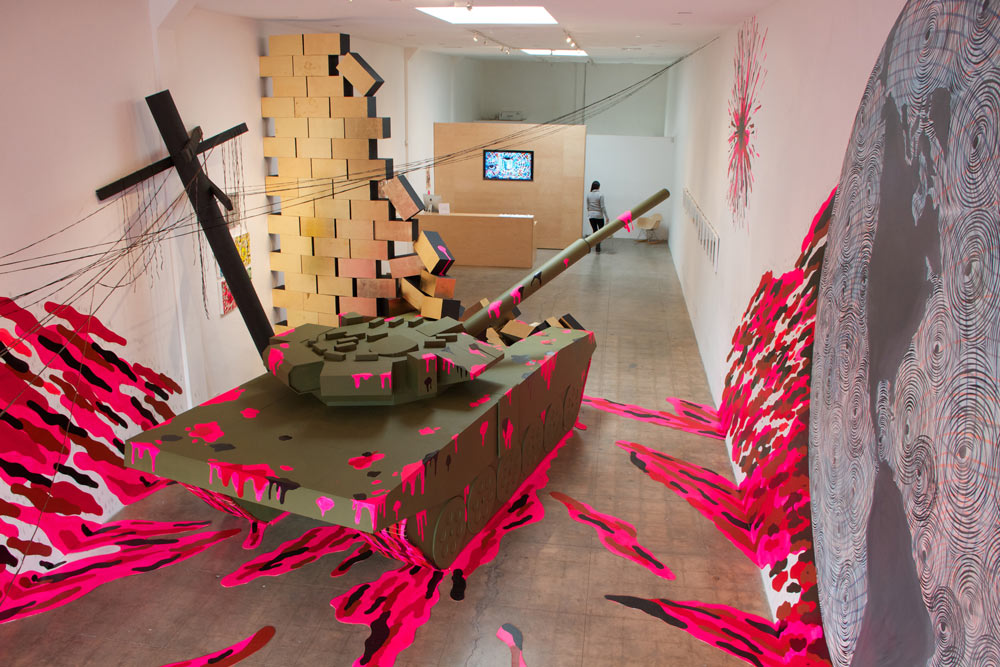 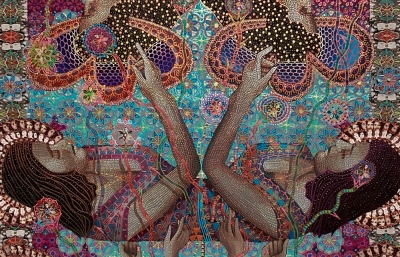 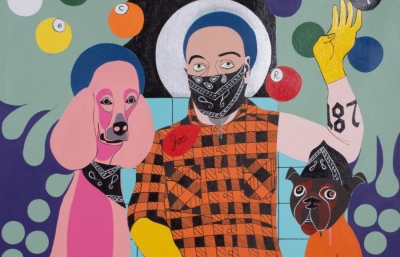 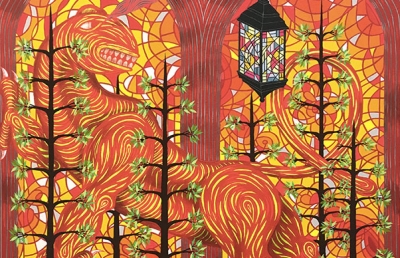 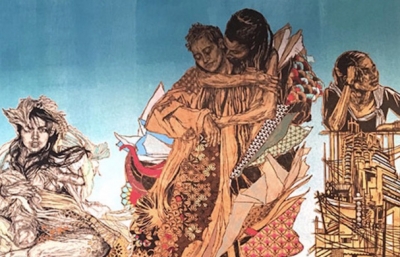 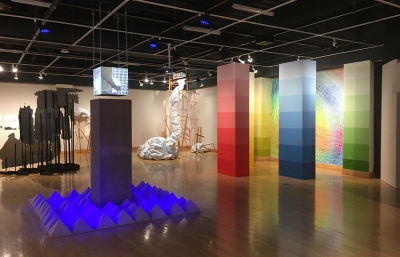 During 2014 SXSW, Juxtapoz and Converse have once again teamed up, bringing artists to Austin to create installations, performances, and interactive art to accompany the music, tech, and film experiences going on throughout the early weeks of March. One of the artist featured this year is Andrew Schoultz...

During 2014 SXSW, Juxtapoz and Converse have once again teamed up, bringing artists to Austin to create installations, performances, and interactive art to accompany the music, tech, and film experiences going on throughout the early weeks of March. One of the artist featured this year is Andrew Schoultz. Schoultz, a recent Los Angeles transplant, spent the better half of the last two decades living in San Francisco, where his mural work  led to wide recognition in the contemporary art scene. Andrew has spent the last 10 years exhibiting works in galleries around the world. Notably, Schoultz staged a solo exhibition at the Monterey Museum of Art in 2013, following an exhibition alongside Paul Klee at the San Francisco Museum of Modern Art in 2011. This interview appeared as a cover story in Juxtapoz on March 2012, with curator and critic, John Zarobell.

John Zarobell: Let’s start with San Francisco: When you first came for art school, what were you interested in doing? Who were your favorite artists, what kind of work did you want to do, and what were you looking at?
Andrew Schoultz: I moved to San Francisco in 1997 for a couple of different reasons, and one major reason was to come out here and skateboard. That was something I did heavily for a good many years. I started skateboarding in fifth grade and pretty much skated hardcore up until around 2001/2002. I still consider myself a skateboarder up until this day, but being a skateboarder growing up in the Midwest was actually not a common thing. Especially early on, you’re kind of the outcast in a lot of respects. But I feel like coming from a skateboarding background, I was looking at a lot of different guys doing the graphics for skateboards. At the time, I remember being very influenced by Marc McKee. I also grew up very interested in break-dancing, graffiti, hip-hop and all that kind of stuff.

I’d say prior to moving to San Francisco, I was influenced by a couple of artists in Milwaukee, one being graffiti writer, Obi One, his name being John Rieter. He’s still an amazing artist but now is primarily a tattooer. I was looking at a lot of stuff going on in the streets, I guess because being a skateboarder, you’re skating on the streets in all these places that most normal people wouldn’t traverse. The average person isn’t walking down certain alleys or going to hidden parts of the city, because why would they? I think there’s also another part of skateboarding that I see very prevalent in the work I make now, too. When I skateboarded I was very fond of making sure I had my tricks down, that I could do them every single time, all the time, so there was definitely a lot of repetition. Now I see how that repetition in my skateboarding, and this sort of obsessive-compulsive desire to really have things locked in comes through in the art I make.

SF was a mecca for skateboarding and graffiti, so both those seemed very good reasons to come out here. When I first arrived, I would say I was still pretty heavily influenced by what was going on in the Midwest, specifically the Chicago music scene. I was heavily into the band Tortoise, the whole way they were presenting their music, their art, their album covers… everything they were doing at the time just seemed very artful and design-orientated to me; even a lot of the records they put out had a sort of print, limited-edition quality to them. At the time, too, the band Tortoise was infiltrating skateboarding videos, including San Francisco’s Stereo Skateboards, which was owned by Jason Lee and Chris Pastras. They were always creating artful ways of presenting skateboarding in these videos with music. Just seeing this kind of thing happening was something I wanted to participate in and didn’t really realize how to accomplish it. In SF, I immediately responded to many of the graffiti writers I saw: Felon, KR, of course Twist, and the artist Alicia McCarthy. I was drawn to her work immediately.

After being here awhile, I started to feel this need for something more. I wanted to do something that had maybe a little bit more of a socially responsible impact. I had seen the Clarion Alley mural project in Thrasher many years before I ever moved out here, and it just so happened a graffiti writer I knew at the time, Peace, was living on the alley. I went over to his house one day and realized, “I’m in Clarion Alley. Wow, this is amazing.” Seeing this project and how this public art could exist as a sort of very avant-garde art, seeming both sanctioned and unsanctioned at the same time, allowed to exist here very guerilla-style, but by the public, as something real and serious that was influential. I’d say this had a very profound impact on me in a lot of ways, just all of a sudden realizing that this kind of thing could be possible.

I wanted to figure out a way to possibly do something in this project and learned that an artist named Aaron Noble was one of the people in charge. One day I just knocked on his door, proceeded to ask him if I could paint a wall in the alley, and he was kind of like, “Uh… yeah sure…” As I learned later on, lots of people had been approaching the project to do these very ambitious murals, and a lot of times it ended up being a conversation where they’d ask, and he’d say, “yeah, come back with a design.” And then they’d never show up again. I presented my idea to Aaron two days later, and eventually he organized it so my first mural went up in 2000. I can seriously go on and on about this whole thing, but that was a very crucial point in my moving to San Francisco, getting involved in this community-based project.