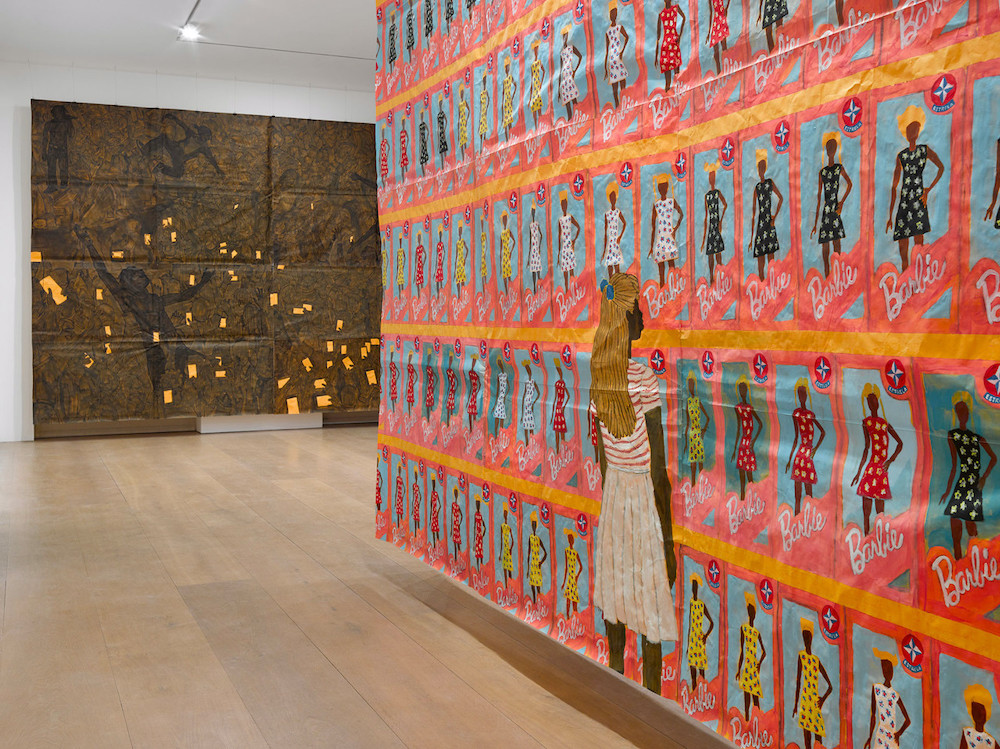 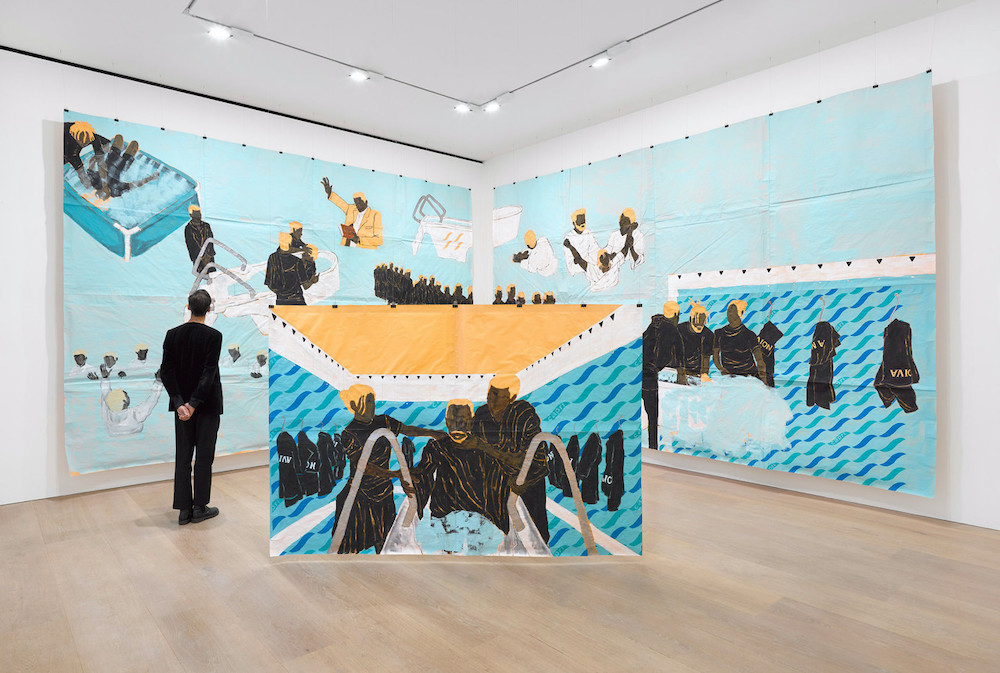 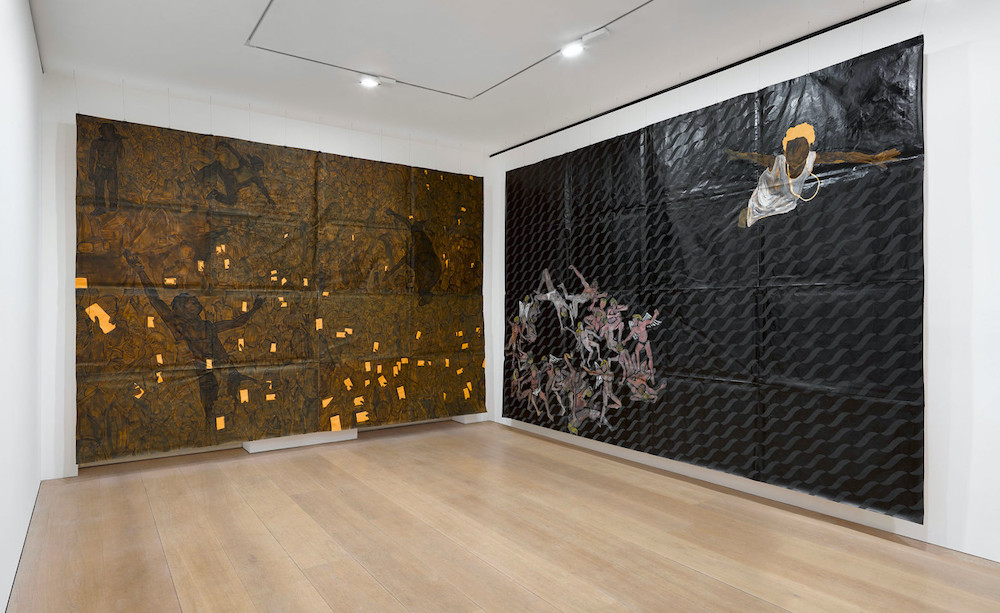 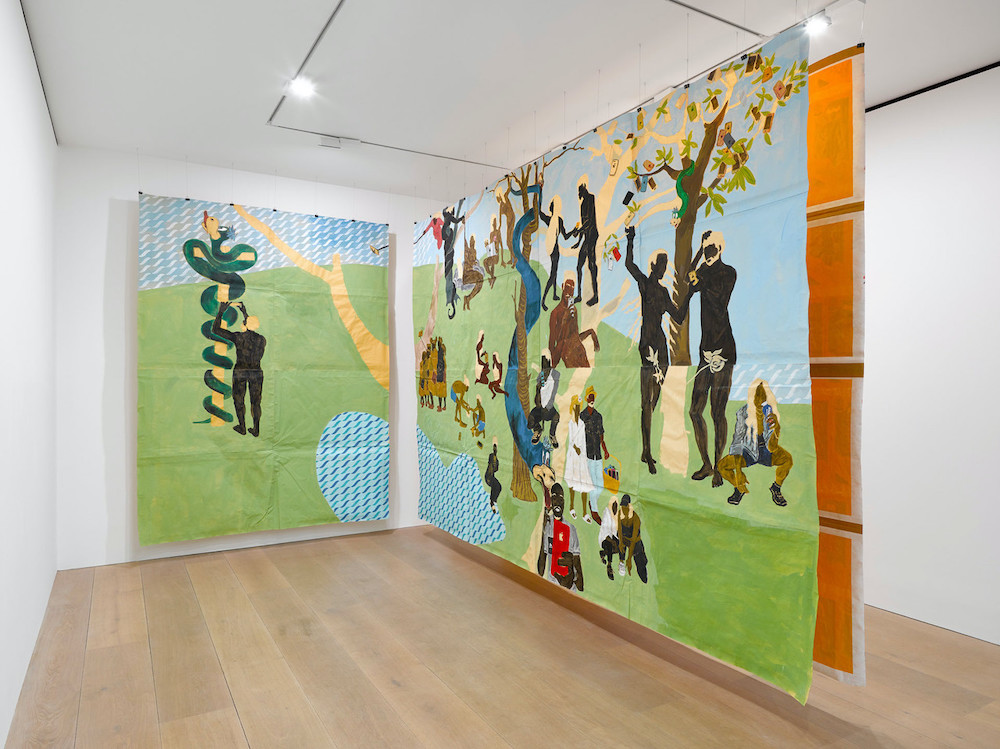 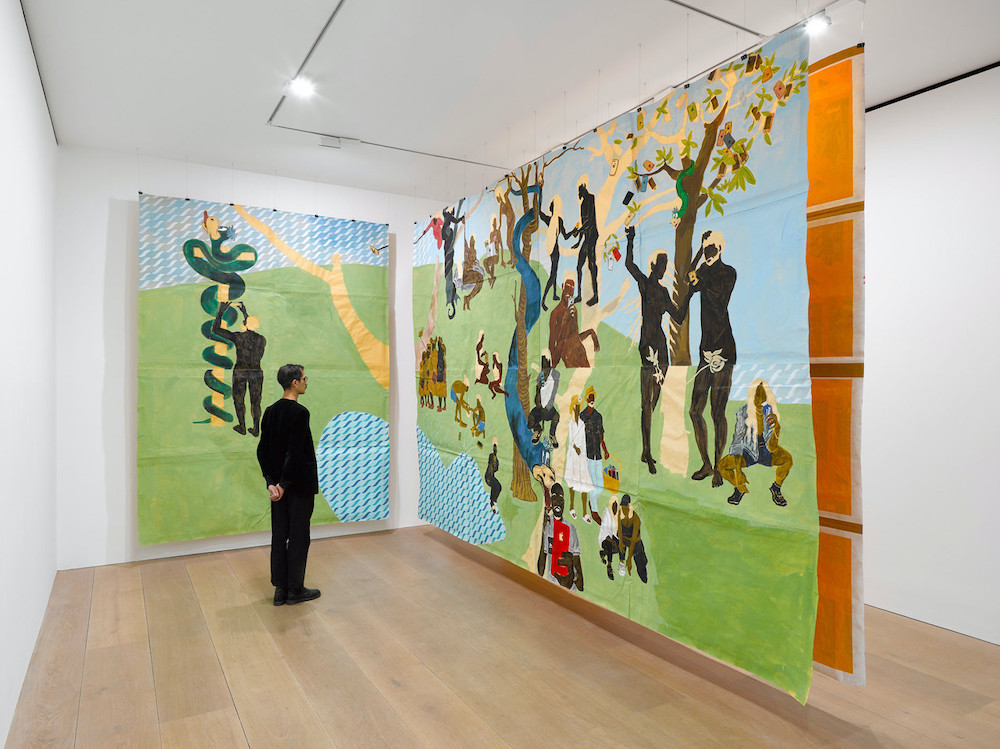 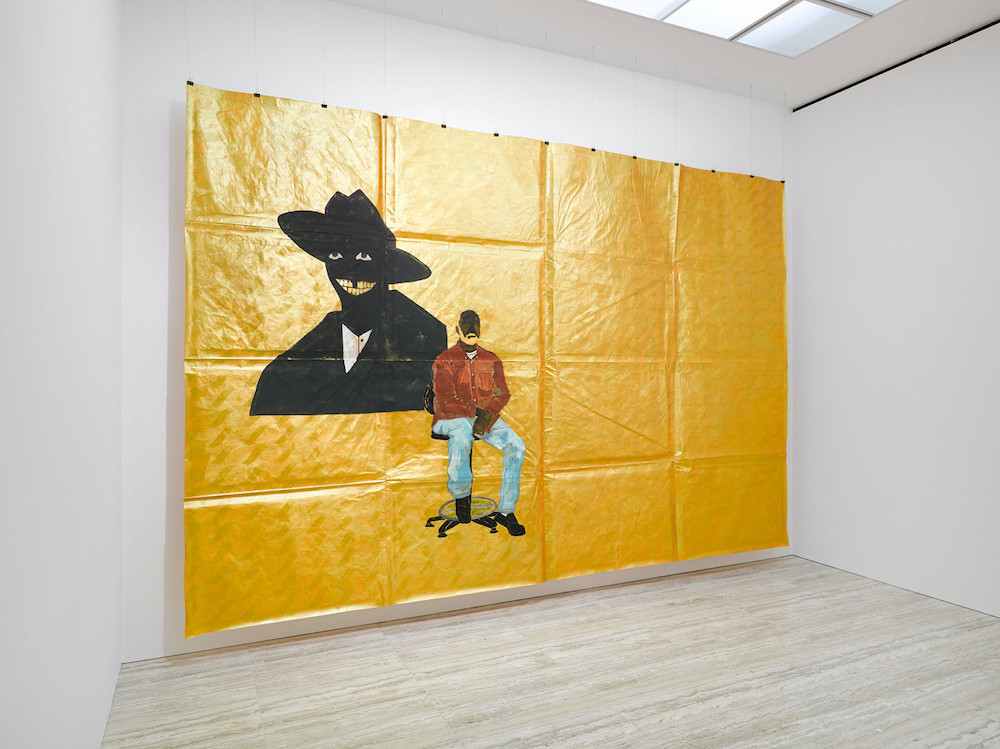 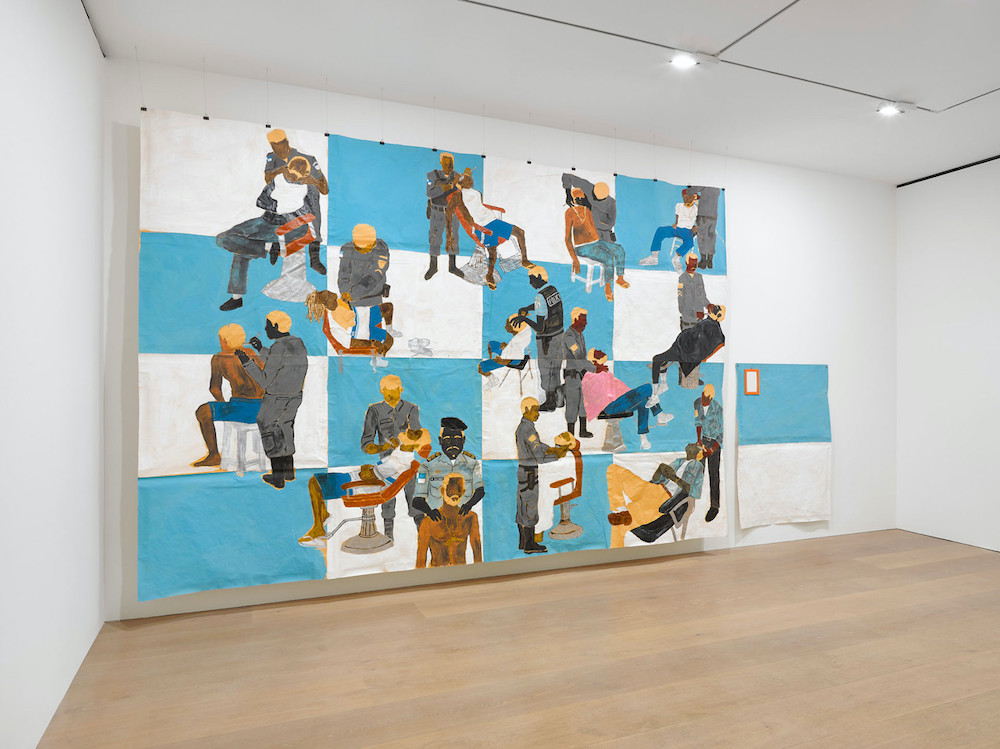 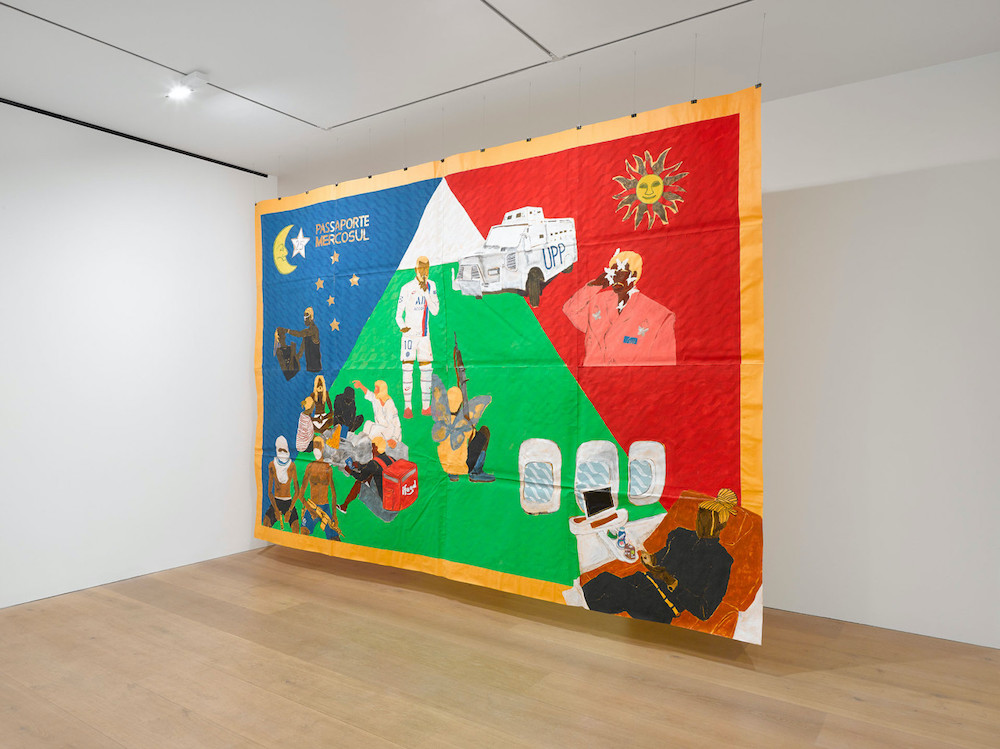 David Zwirner is pleased to present Pardo é Papel: Close a door to open a window, an exhibition of new works by the Brazilian artist Maxwell Alexandre (b. 1990), on view at the gallery’s London location. This is Alexandre’s first solo exhibition in the United Kingdom.

Raised and residing in Rio de Janeiro’s Rocinha favela, Alexandre roots his practice in the densely populated and socioeconomically diverse neighbourhood that surrounds his studio. Observing how forces such as the evangelical church, organised crime, and state violence exert control in the city’s favelas, the artist makes visible the primary authorities that shape the lives of its Black inhabitants and amplifies everyday symbols that serve as displays of strength and resilience. In his works, he employs found objects and nontraditional supports, such as iron doors and window frames as well as plastic tarpaulin with wave-like patterns, used to make paddling pools, incorporating material elements that are at one with his surroundings. These intimate details establish a graphically striking backdrop for the individuals and groups of figures he portrays in these vast collaged paintings, which are pieced together from numerous parts. Alexandre absorbs and reinterprets cues from popular culture, particularly Brazilian and international hip-hop music, to create a body of work that conceptualises new representations of power.

The exhibition will feature new work from the artist’s ongoing Pardo é Papel series. The title takes its name from the Portuguese word pardo, meaning ‘brown’, which refers to the widely available kraft paper that Alexandre uses as a support for his work as well as to the census-designated category used to describe Afro-Brazilian people and others of mixed race. Using this historically loaded term, Alexandre deliberately engages and contends with Latin American colonial and Afrodiasporic legacies that continue to affect how Black society is stratified in Brazil.

Alexandre conceives this new exhibition as a new “album,” and he emphasizes in his paintings the impact of global hip-hop in contemporary Black storytelling, setting up his own language of representation that similarly privileges pride and self-determination. His earlier and recent work is influenced by three rappers from different areas in Brazil: Baco Exu do Blues from Bahia, Djonga from Minas Gerais, and BK’ from Rio de Janeiro. Pardo é Papel: Close a door to open a window takes its name from a verse by Tyler, the Creator, and other exhibited paintings’ titles are also extracted from lyrics by Solange and Frank Ocean. Alexandre collapses prescriptive boundaries by threading the vernacular poetry that flourishes in the favelas to the work he shows in spaces devoted to high art.

On the ground floor, the namesake painting of the exhibition synthesizes many of its themes. Close a door to open a window (2020) uses as its background a popular illustration found on LSD blotter sheets in Brazil: a snow-capped mountain framed by a sun and crescent moon, with “1943” spelled out at its base. The painting brings into the gallery space images common in favelas and complexly references moralistic discourses on drugs and the politics of “respectability.” In Dalila retocando meus dreads (2020), Alexandre composes a scene in a barbershop, a hub of Black life, whose floor is covered by a blue-and-white checked pattern that repeats the state flag of Rio de Janeiro—an area notorious for its ruthless police force.1 Alexandre creates a dialogue between physical and psychic violence as it manifests in an uncertain but vibrant present.

Its title inspired by a Djonga verse, Peço bênção pra sair e pra chegar (2020) in the Travertine Gallery acknowledges that a spiritual threshold has been crossed.2 In this work, he yokes his evangelical Christian upbringing with the Afro-Brazilian religion candomblé to pay homage to the American artist Kerry James Marshall, whose paintings were exhibited at David Zwirner, London, in 2014 and 2018. Mounting a sacred space that absorbs these past resonances and connecting Marshall to Exú, the guardian of orixás (deities) and their main interlocutor in Yoruba religions, Alexandre constructs a mystical genealogy that transcends the linear historical trajectory to generate a work that is both original and syncretic.

The second floor debuts New Power, a subseries of Pardo é Papel that has its genesis in Alexandre’s 2019 solo exhibition at Musée d’art contemporain, Lyon. Here, Alexandre envisions a twenty-first-century art history that is shaped and led by Black practitioners and thinkers who not only create but also experience and consume works of art. Juxtaposing two large pardo “paintings,” both ornately framed in gold and hanging on a white wall, the diptych Dois quadros SAMO na parede (2020) interprets Baco Exu do Blue’s lyrics “two SAMO paintings on the wall” as the moment when one has enough wealth to own works by Jean-Michel Basquiat and alternatively, with their play on the original words in Portuguese, as “we are two paintings on the wall.”3

Maxwell Alexandre was born in Rio de Janeiro, where he currently lives and works. After a decade as a professional roller-skater, he completed his mandatory military service and went on to obtain a degree in design from Pontifical Catholic University of Rio de Janeiro (PUC-RJ) in 2016.

Alexandre presented his first solo exhibition O Batismo de Maxwell Alexandre at A Gentil Carioca gallery in Rio de Janeiro in 2018. That year his work was also featured in the group exhibition Histórias Afro-Atlânticas at Museu de Arte de São Paulo Assis Chateaubriand (MASP). His work was recently the subject of a 2019 solo exhibition at Musée d’art contemporain de Lyon, France, and at the Museu de Arte do Rio (MAR), Rio de Janeiro, which has travelled in 2020 to Fundação Iberê Camargo, Porto Alegre, through 2021. In 2021, he will have a solo presentation at the Palais de Tokyo, Paris. Alexandre is a finalist of the 2020 PIPA Prize and has just been named as a Deutsche Bank Artist of the Year 2020.