Marcel Dzama: Who Loves the Sun 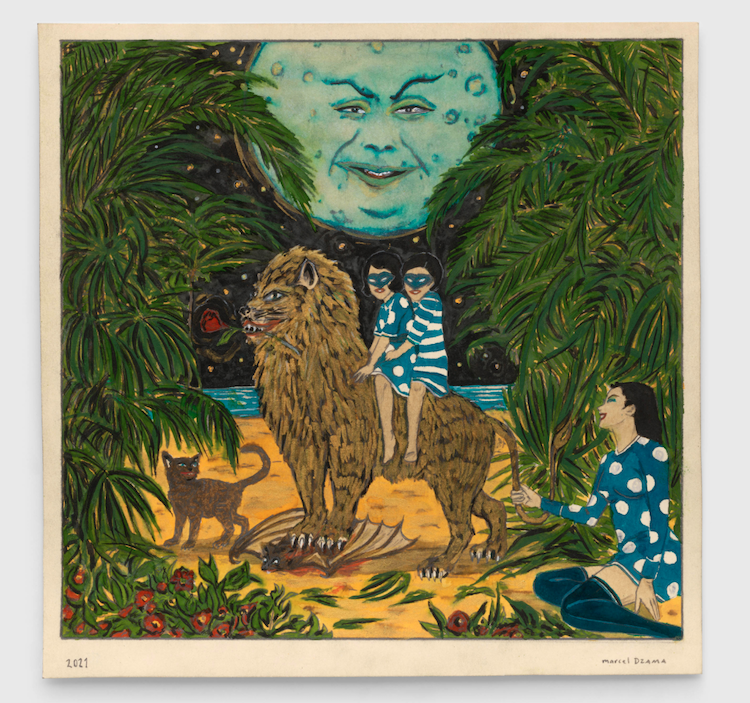 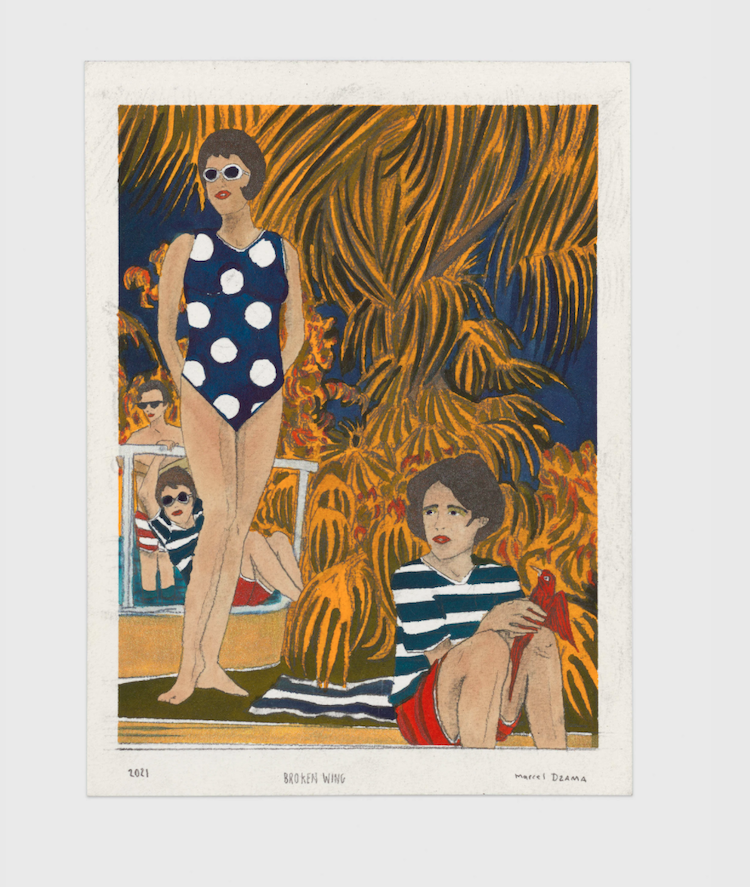 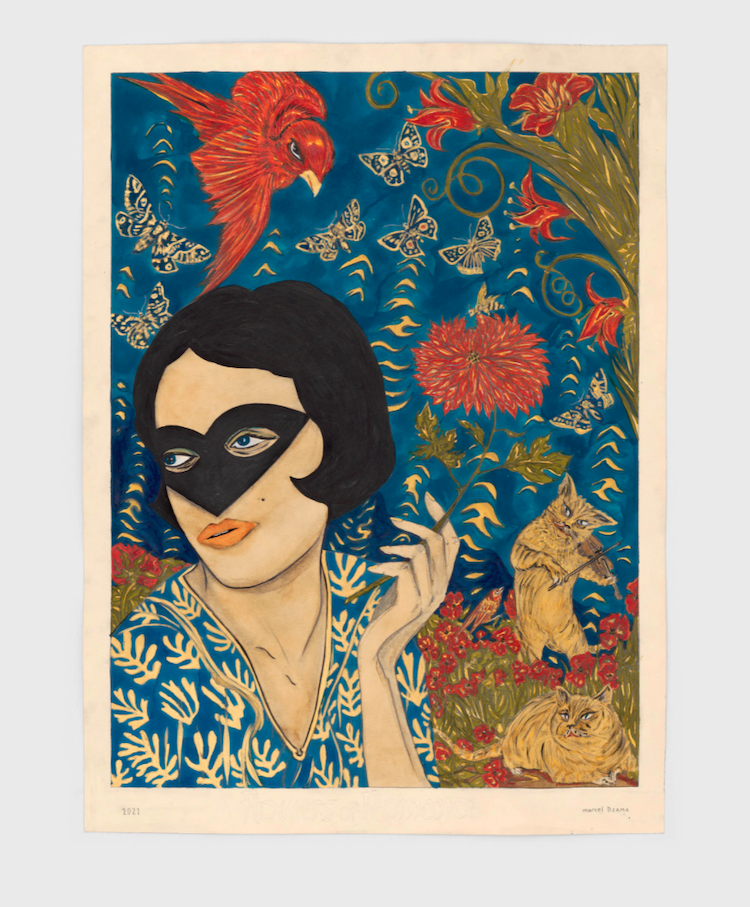 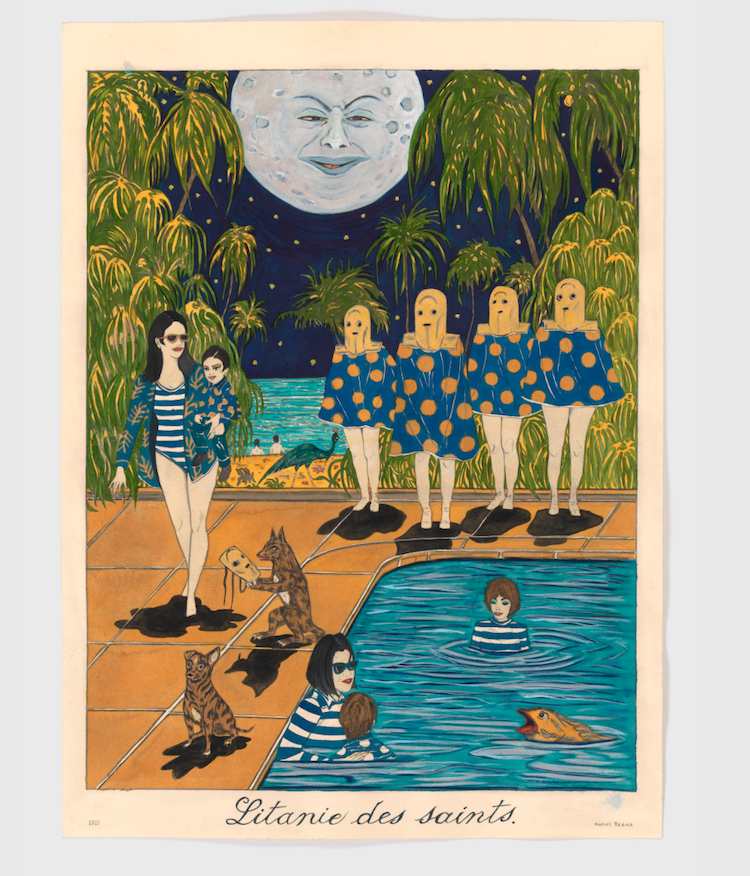 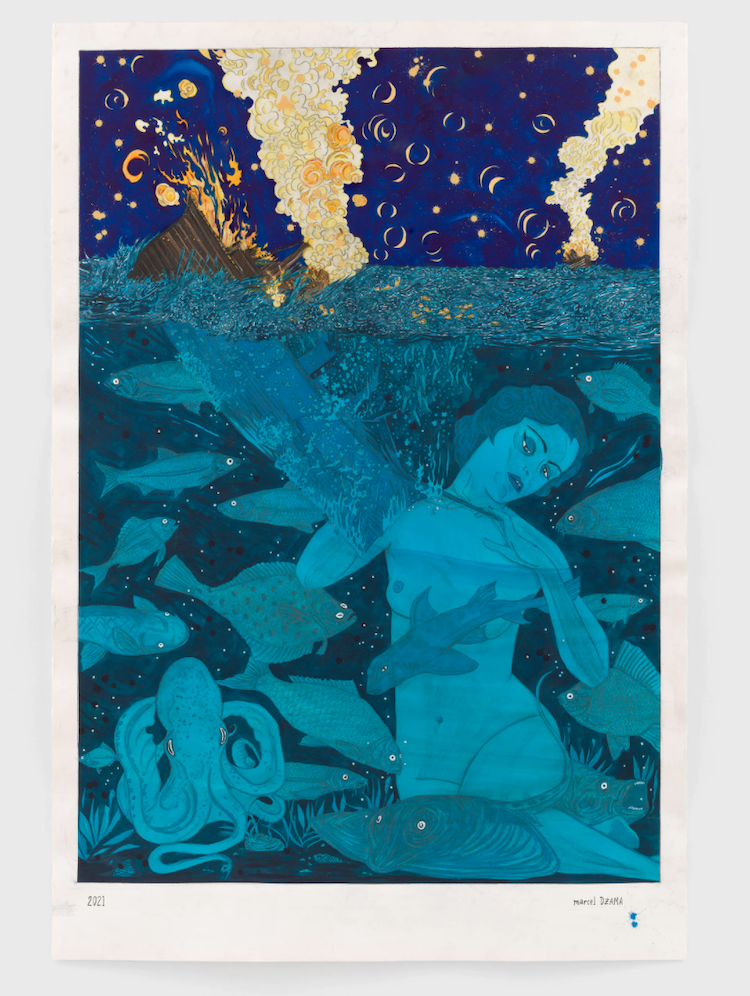 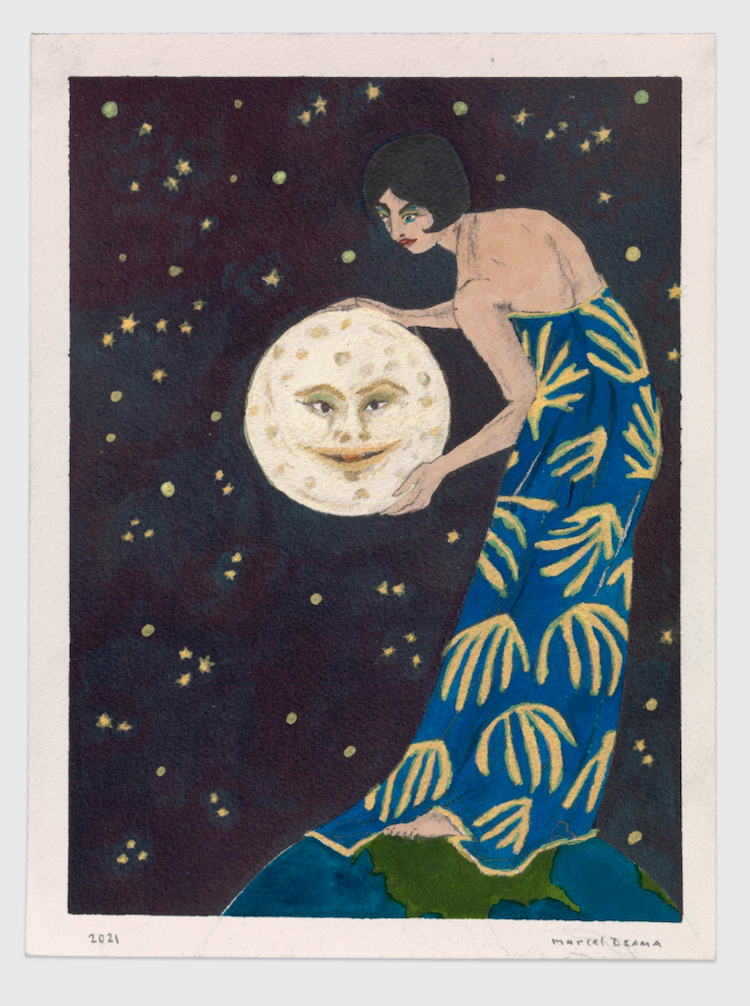 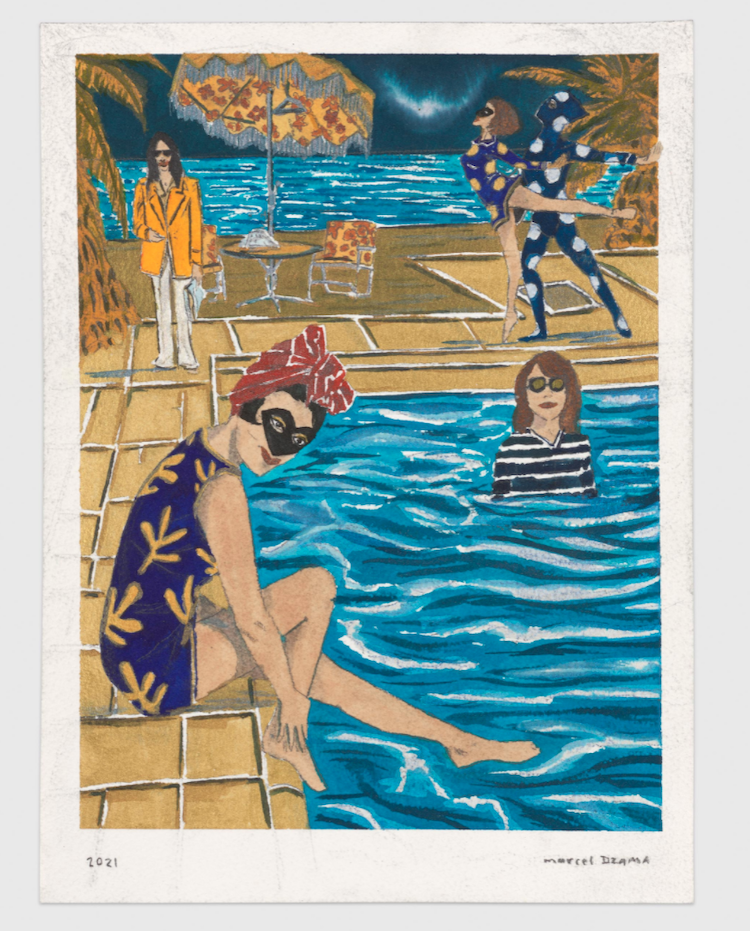 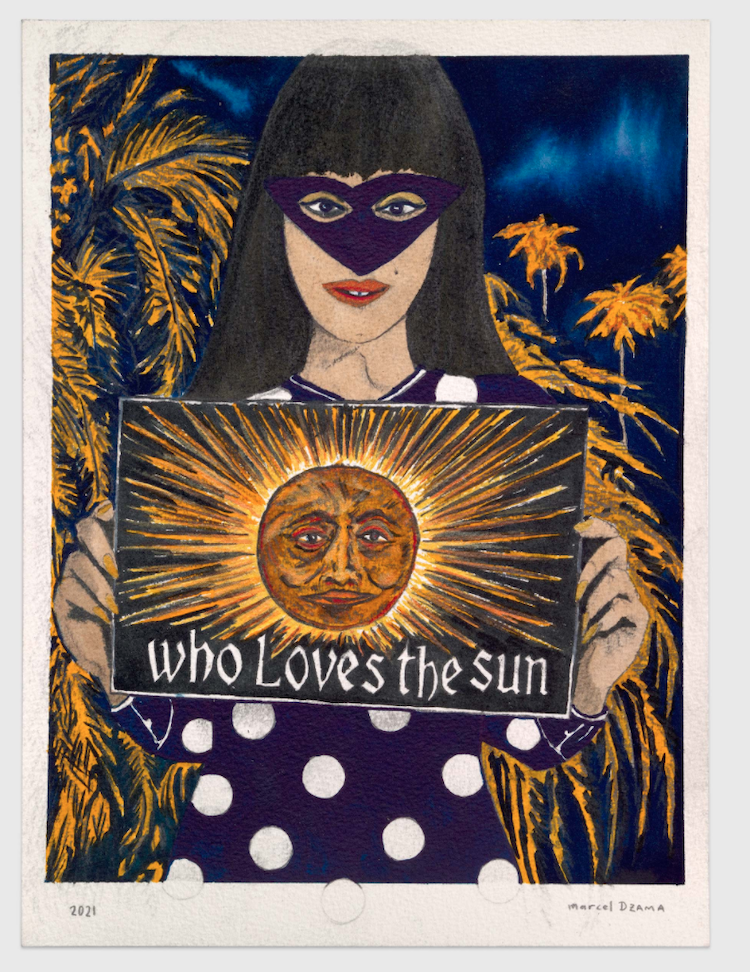 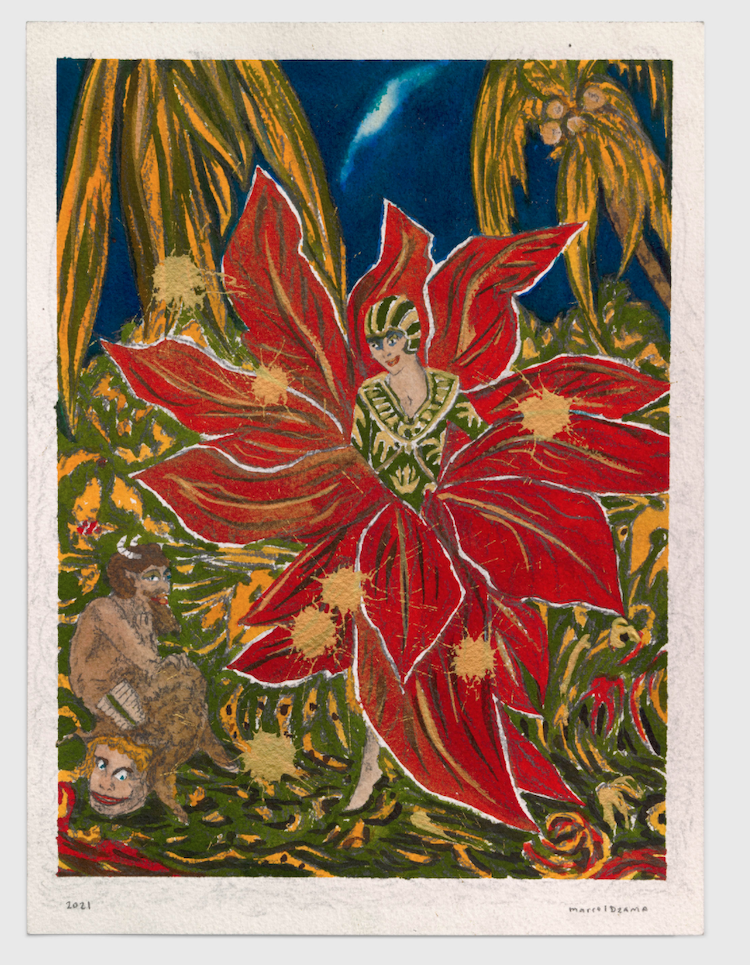 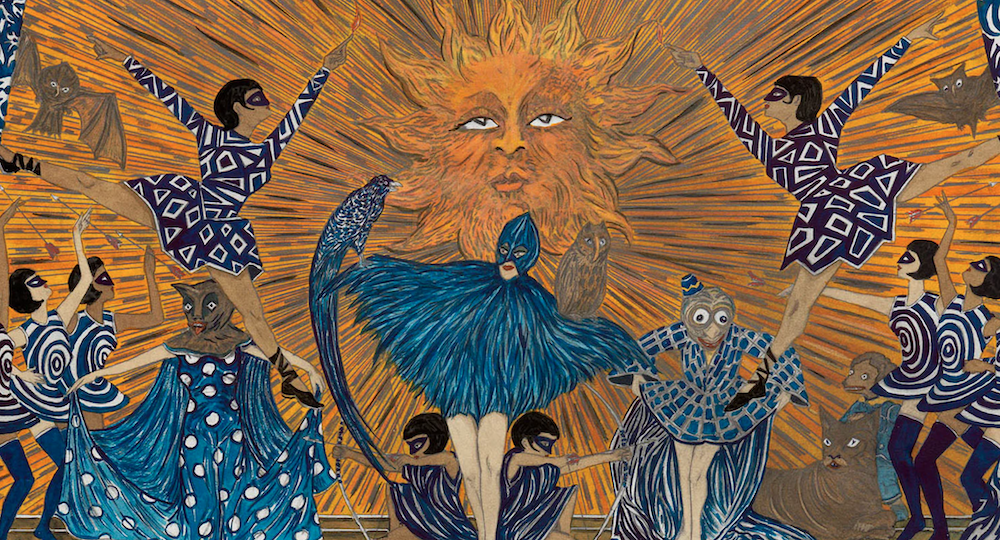 David Zwirner is pleased to present Who Loves the Sun, an exhibition of new work by Marcel Dzama, on view at the gallery’s 34 East 69th Street location in New York. The exhibition coincides with the opening of a major survey of the artist’s work at the Sara Hildén Art Museum, Tampere, Finland.

Taking its title from a song by the Velvet Underground, Who Loves the Sun features an array of new drawings that expand on Dzama’s interest in travel and nature, two themes that have become increasingly prevalent in his art. Many of these new works were initially inspired by photographs Dzama took in Morocco, Mexico, and Fire Island, places he traveled before the 2020 COVID-19 pandemic. Dzama incorporates elements of the photographs into the world of his art, resulting in works that mix tropical imagery, depictions of leisure and play, and bright colors with illustrations of masked and mysterious characters, as well as dancers, wild animals, and hybrid figures inspired by mythic, biblical, and literary subjects.

An anthropomorphized moon figures in several of these drawings, directly recalling the moon in French filmmaker Georges Méliès’s seminal early film A Trip to the Moon (1902), while also alluding to the rare convergence of recent lunar events, including a so-called super blood moon and a blue moon. Other works present delicately colored underwater vignettes of seahorses and marine flora and fauna undisturbed by the world above. For Dzama, these fantastical compositions of familiar yet far-off, enchanted worlds respond, in part, to the universal experience of isolation during the pandemic, and a sense of wanderlust that many experienced while in lockdown. “I find the fear, anxiety, and sadness from the virus has changed my art,” Dzama notes. “It has focused it in a more hopeful and positive direction. I find when things are more easygoing, I get a little more cynical and world-weary, but when things are down, I find myself being more hopeful and positive in my work.”

A large six-part work on paper, measuring over twenty-five feet long, which Dzama first debuted at his 2021 solo exhibition at the Savannah College of Art and Design Museum of Art, Georgia, will also be included in the show. Similarly influenced by the plant and wildlife Dzama encountered in his travels, this massive work offers a view into a lush environment filled with bats, monkeys, and butterflies, as well as dancing figures, a beaming moon, Humpty-Dumpty, and several skulls, which serve as somewhat sinister memento mori among an otherwise jubilant scene.

Also on view will be the original drawings Dzama created for public artwork in mosaic commissioned by the Metropolitan Transportation Authority Arts & Design for a subway station in Brooklyn, New York. The drawings, and the corresponding murals, feature vivid theatrical scenes of masked dancing figures, whose attire references the artist’s own costumes and designs for his 2016 collaboration with the New York City Ballet, as well as the avant-garde costumes and stylings of Oskar Schlemmer’s iconic Triadic Ballet (1922) and Francis Picabia’s signature polka dots. The loose bilateral symmetry of these works—whereby leaping and pirouetting dancers are counterbalanced by complementary figures on the opposite side of the composition—pivots around depictions of the sun and moon derived from imagery Dzama found in fourteenth-century manuscripts on alchemy.

Contrasting with these more hopeful and joyful works are a series of drawings that present foreboding representations of ecological disaster. Mixing literal and symbolic imagery, these works are informed by the artist’s own growing sense of urgency over environmental degradation. In a large-format diptych, for example, Dzama shows the personification of Mother Nature sinking an oil ship. In the pendant image, Mother Nature lies dead at the bottom of the sea.

In addition, the exhibition will present several films by the artist, including Lost Cat Disco, a film Dzama made with his son that premiered at Performa in 2020; another recent film he created starring Amy Sedaris and Raymond Pettibon; and a new film made specifically for this show. Dzama has also prepared a special zine for the exhibition that will reproduce one of his scrapbooks as well as illustrations of the new works.