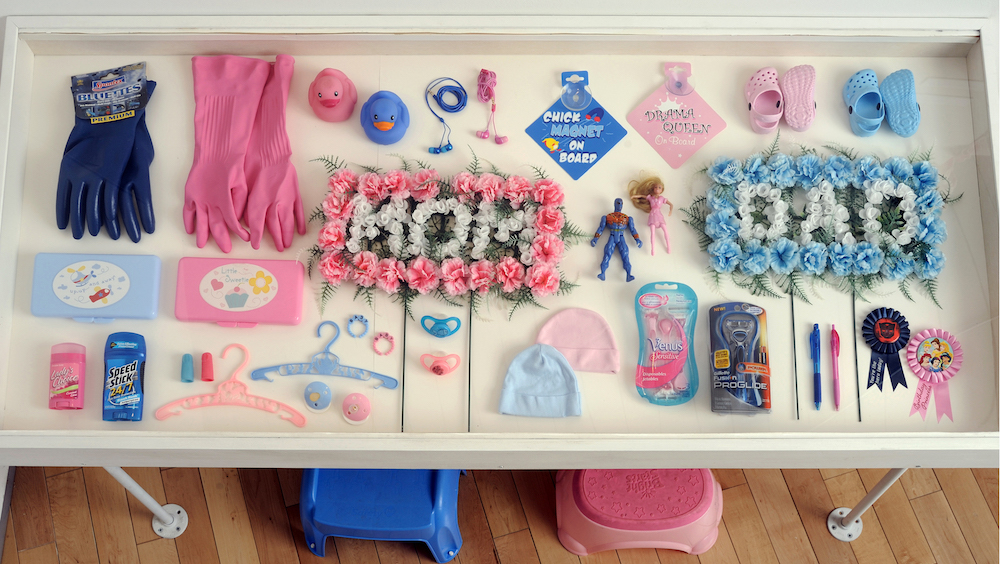 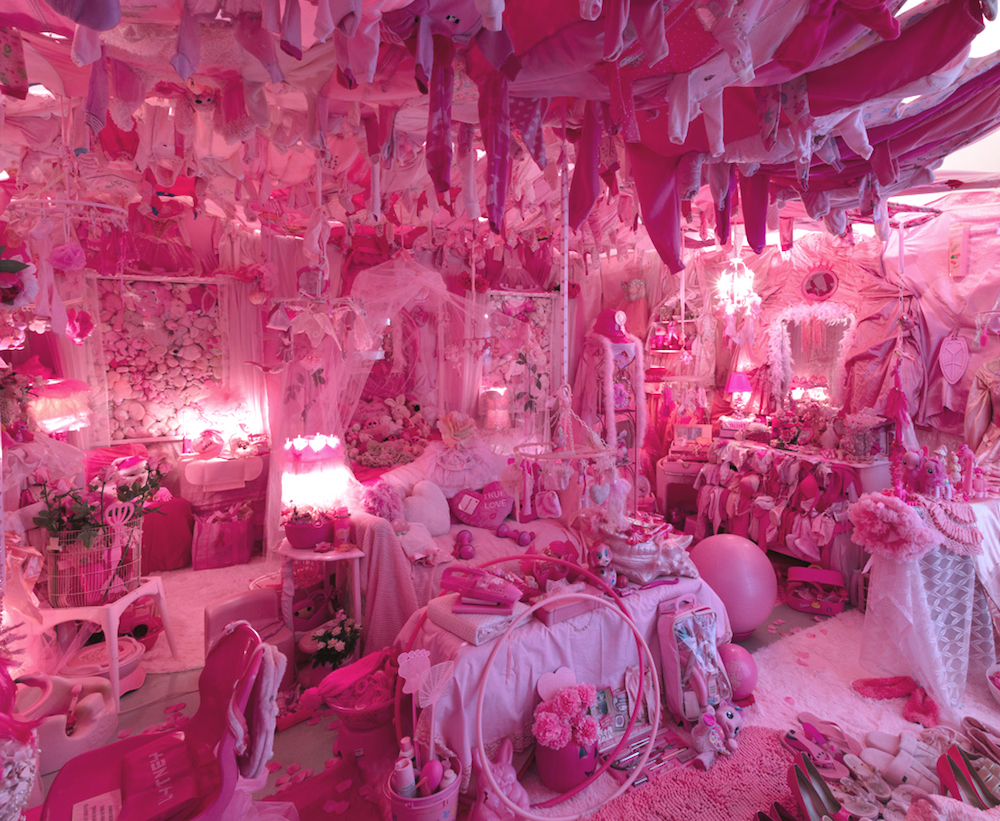 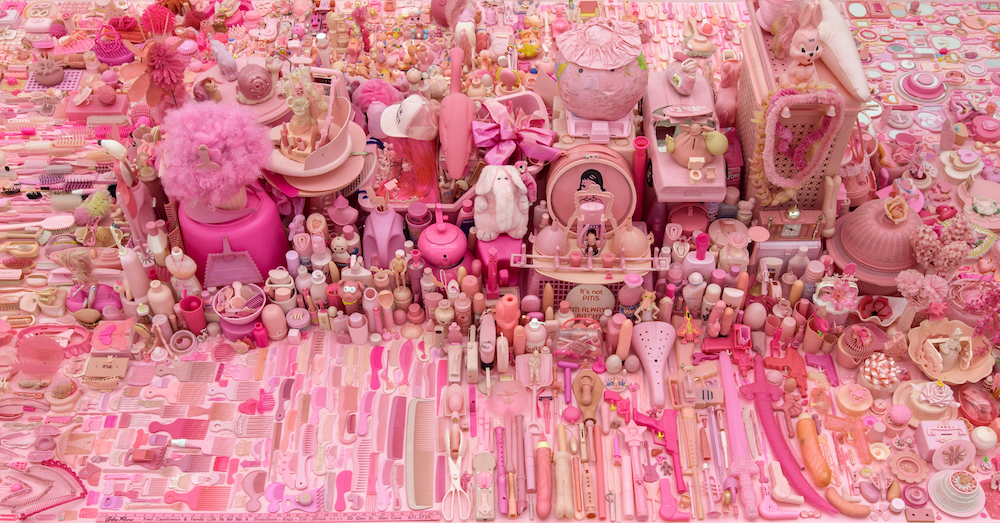 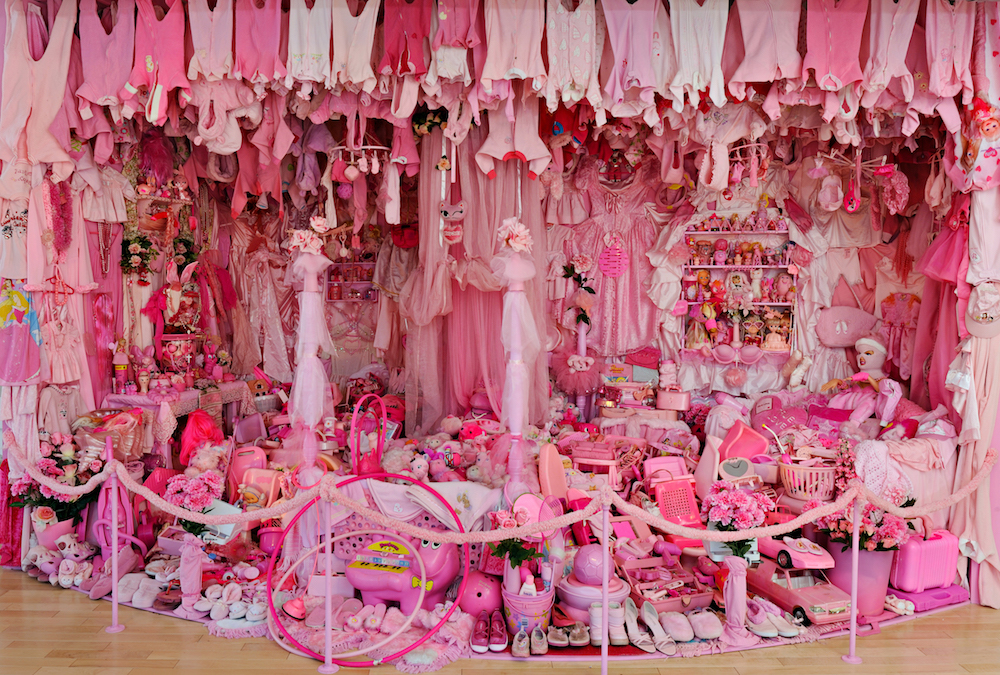 Portia Munson’s elaborate installations are akin to holding a mirror to contemporary culture’s mass consumerism and cis- normative gender norms, an experience that is at once captivating and mesmerizing. It is easy to become enveloped in Munson’s Bedroom (1994- 2018), a room-sized space, replete with windows, and crammed with thousands of pink objects commonly marketed towards girls. In Her Coffin (2016), a long rectangular glass box seems ready to explode with the plastic pink bric-a-brac inside, including iconic pink ribbon refrigerator magnets and breast cancer awareness wristbands. The work is a carefully arranged reminder by Munson that even in death, women can look forward to a smothering of gendered ephemera.

From September 30—December 16, 2018, the Bedford Gallery in Walnut Creek, California will open Her World/Her Room, an exhibition of prints, video, paintings, and installations by New York artist Portia Munson.

For almost twenty-five years now, Munson has been creating artworks that fall into her series The Pink Project, where she systematically unpacks the engrossing aura of the color pink and its mandated symbolization of the feminine. The Bedford Gallery exhibition includes Munson’s massive installations Bedroom and Constellations along with prints, a projection, and additional sculptures from Munson’s art practice.

Munson’s obsession with color is intrinsically tied to her interest in found and discarded objects: cheap but evocative remnants of a dystopian commodity culture—the same culture that pushes a rose-tinted femininity onto its consumers.

In Munson’s words: “There’s also an embedded history in a thing that’s already been used. I’ve always been intrigued by what gets thrown out, i.e. often perfectly usable things. Increasingly over time, found objects have become a way for me to comment on our material-driven lifestyle and economy... The “over-load” is a comment on the pressure we experience from our consumer- driven culture to buy more new stuff.”

Munson’s shrine-like installations critique materialistic culture while simultaneously honoring discarded, plastic objects that often spark nostalgic remembrances among viewers. Memorializing forgotten or discarded objects and creatures is also central to Munson’s mandala images, in which the artist meticulously arranges sacred circular forms out of picked flower pedals that surround the bodies of dead birds and other animals found in her neighborhood. These photographs capture the fleeting lives of urban wildlife, as well as the devastating encroachment of human activity in rural, wild areas.