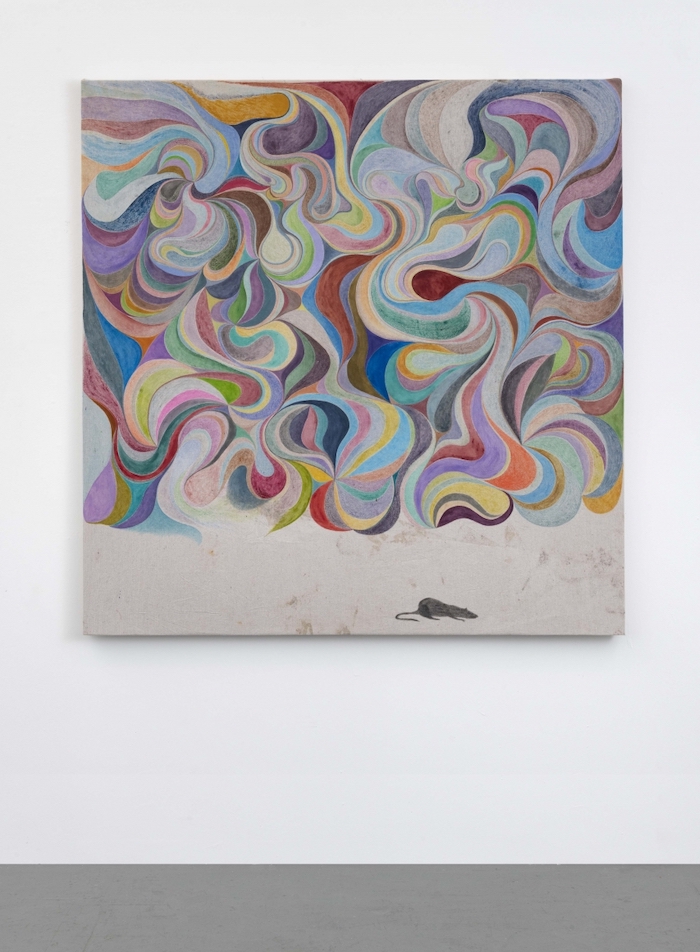 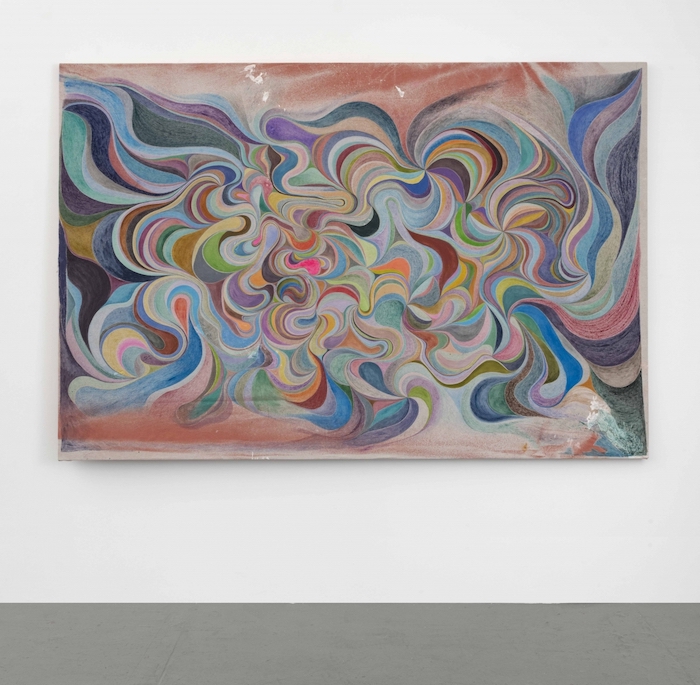 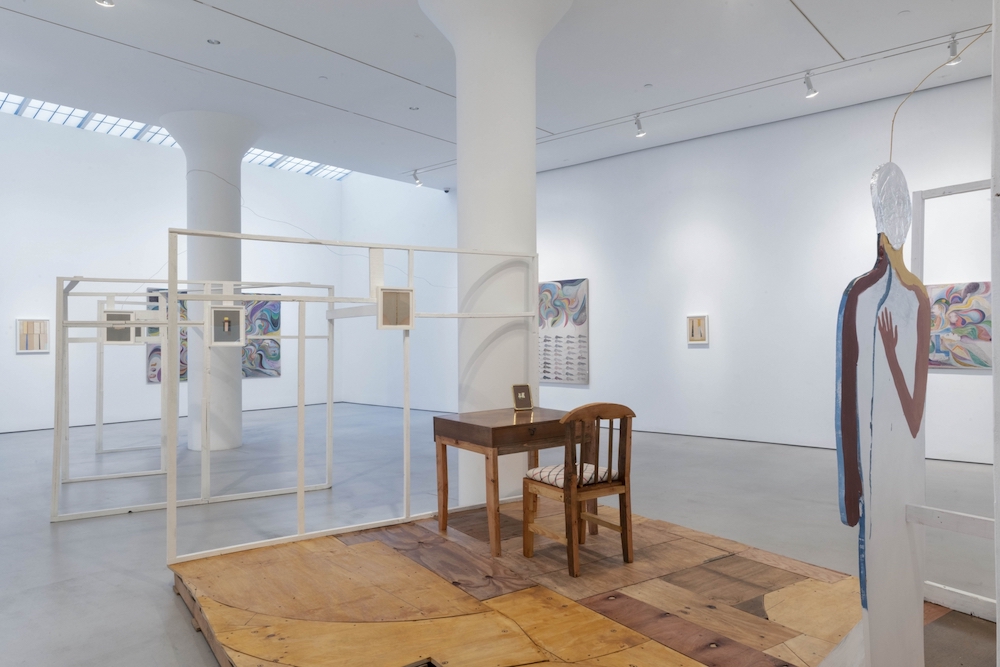 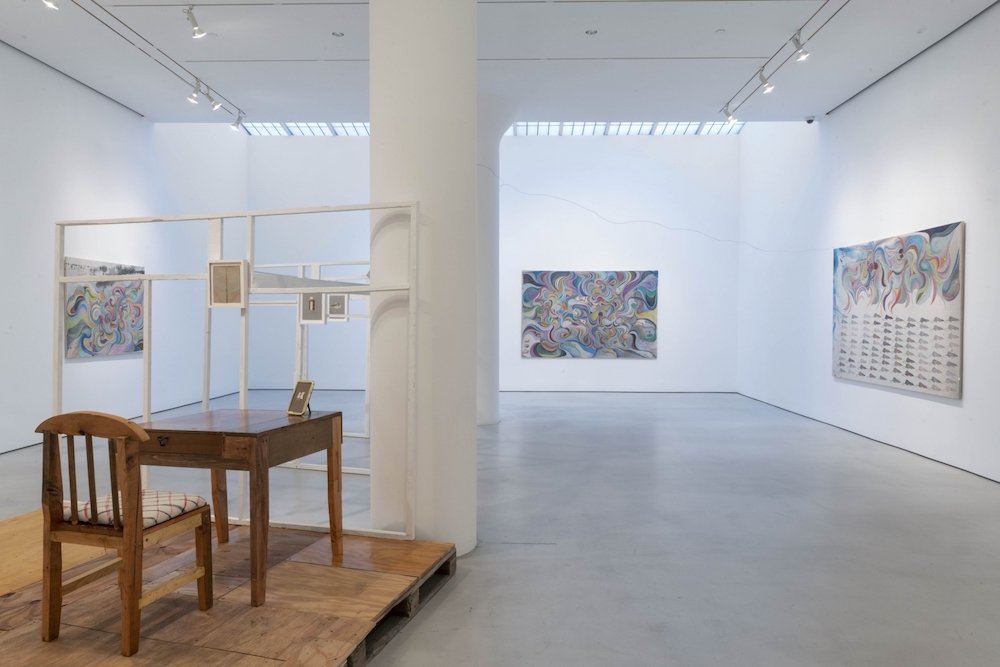 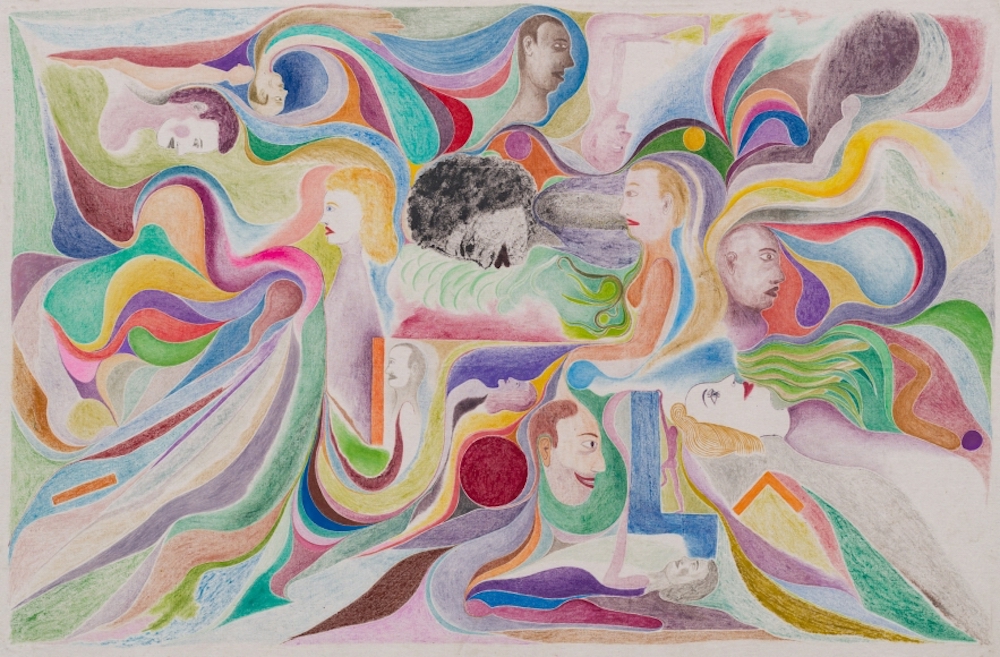 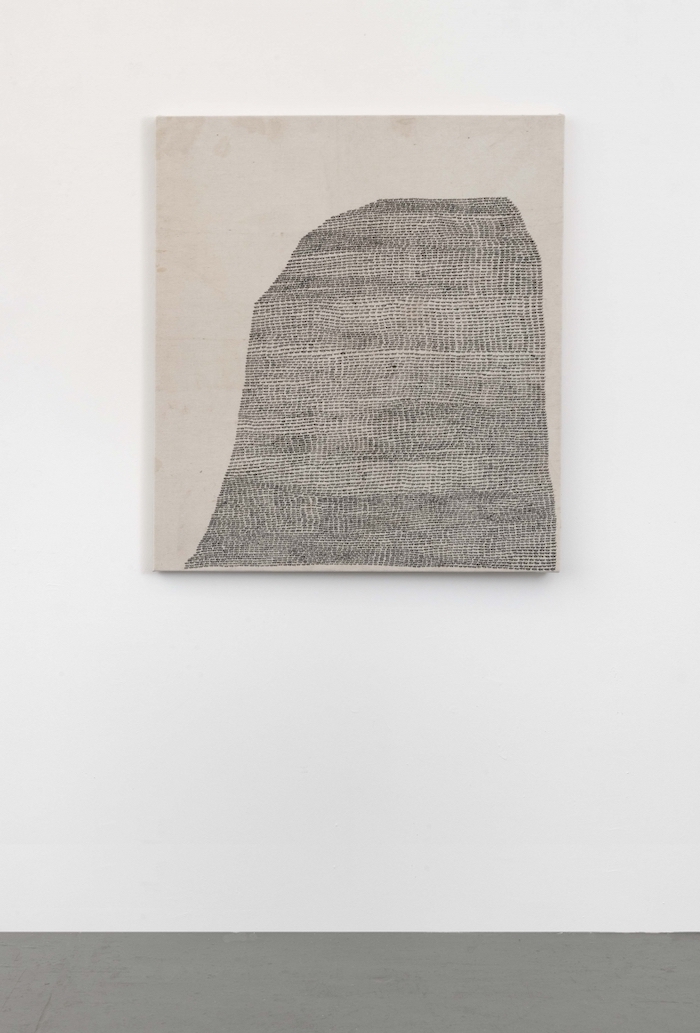 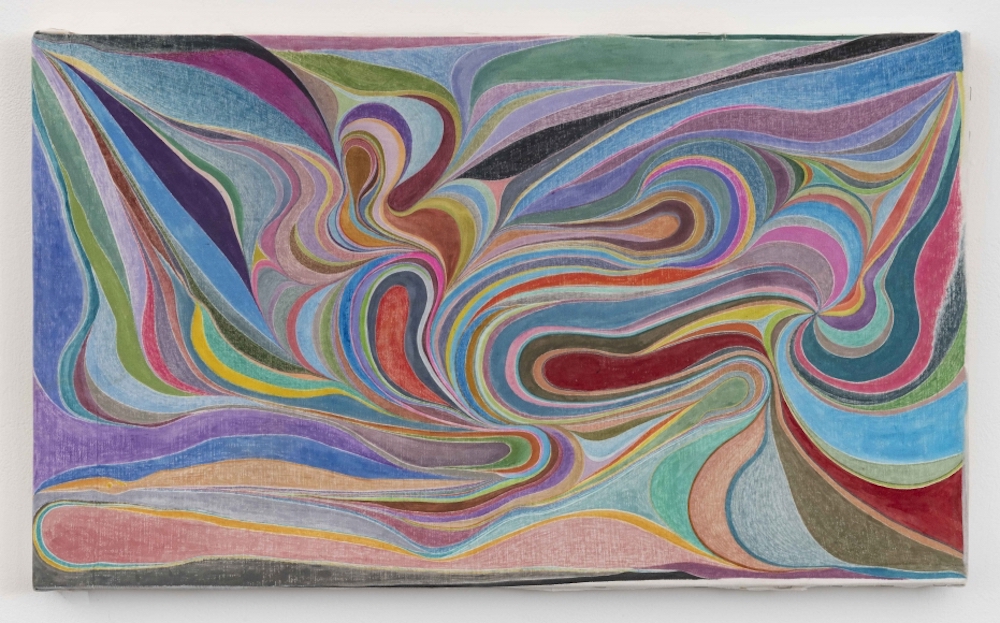 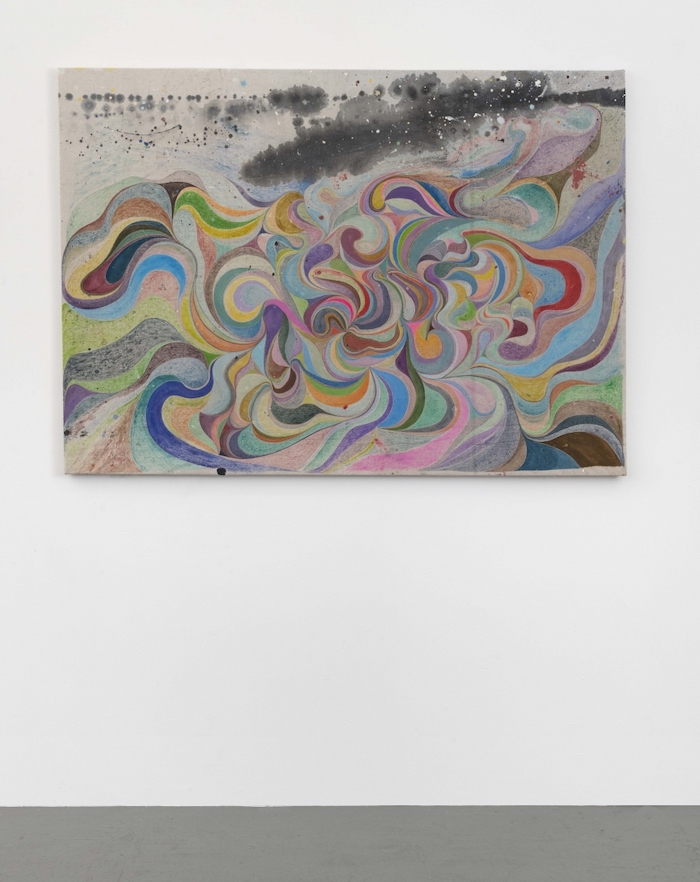 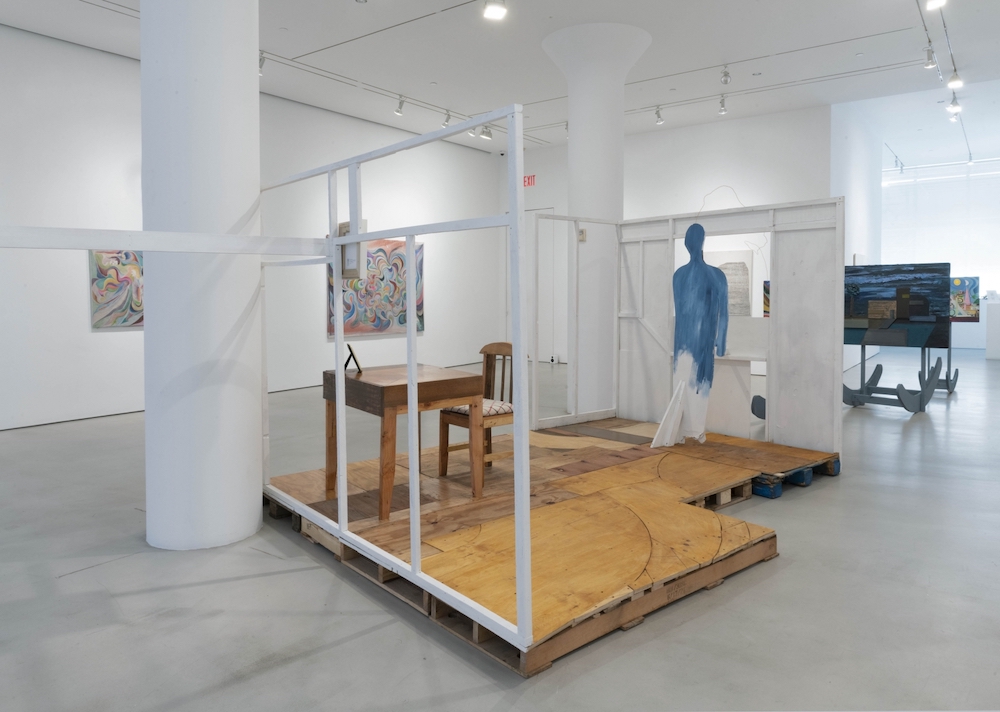 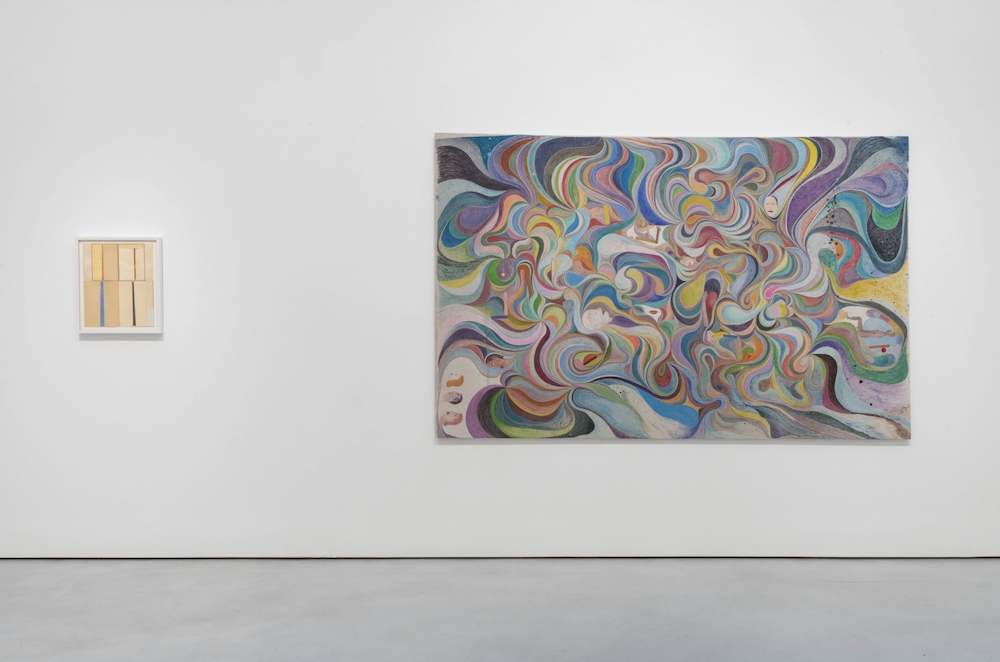 Mitchell-Innes & Nash is pleased to announce its third solo presentation of work by Chris Johanson, Considering Unknow Know With What Is, And, featuring new paintings on recycled canvas. The exhibition will be on view through December 18.

Over the last five years, Johanson has made a significant departure from previous bodies of work. Reflecting on life and the material footprint that humans leave behind, Johanson has abandoned wood substrates for discarded drop cloths and clothing stretched over found stretcher bar materials, creating slow and meticulous paintings reminiscent of ancient frescoes or mandala paintings.

A deliberately measured and thoughtful method, Johanson considers his work on these paintings to be a meditative process. He contemplates themes of impermanence, fluidity and the overall fleeting nature of existence. The subject matter ranges from swirling abstractions to floating emotive heads to armies of ants. Johanson seeks to emphasize the potential healing effects of art making as we all deal with the over-stimulation, anxiety and loss that go hand in hand with recent pandemic life.

Alongside the paintings, Johanson will incorporate six artworks by his late friend and fellow artist, Chris Corales (1969-2018), that will be displayed in an architectural intervention constructed by the artist on site in the days leading up to the opening. Additionally, a collaborative furniture piece by the artist and his partner, Johanna Jackson, will be included. This underscores the artist’s exploration of both bereavement and collaboration as meaningful components of a meditative and balanced artistic practice.

The exhibition will be accompanied by a fully illustrated catalogue dedicated exclusively to Johanson’s recent explorations on recycled canvas. Designed by Perron-Roettinger, the publication features new essays by both the artist and Jenny Gheith, Associate Curator of Painting and Sculpture at the San Francisco Museum of Modern Art (SFMOMA).

In her essay for the catalogue, “Harmonic Meditations: Chris Johanson’s Form of Deep Listening,” Gheith writes:

“Johanson uses words like ‘therapeutic’ when describing the process of making his recent ‘peaceful paintings.’ Foregrounding the work’s healing effects, Johanson paints in a way that is ‘slow and deliberate, and because of that creates a calm meditative headspace.’ He has been working in this manner in order to ‘slow down my thoughts, to reduce the noise of my life.’ Just as in his continual search for personal and creative growth, Johanson has used his tinnitus—the persistent illusion of sound in his ears—to reimagine his sonic environment and relationship to listening, so have the sonic elements in his artworks and installations quieted and slowed down. Not only have they shifted in tone and register, but some have nearly disappeared. For example, Johanson’s recent compositions rarely speak to us through speech bubbles and text; rather, his paintings emphasize a more formal visual language grounded in an energetic flow. These rhythmic hums manifest as swirling shapes based on the curvature of his hand as it shifts against the surface. Johanson’s vivid palette has transformed into more muted tones and organic forms that are less saturated and at times seem to fade into or look worn against the cotton surface.”