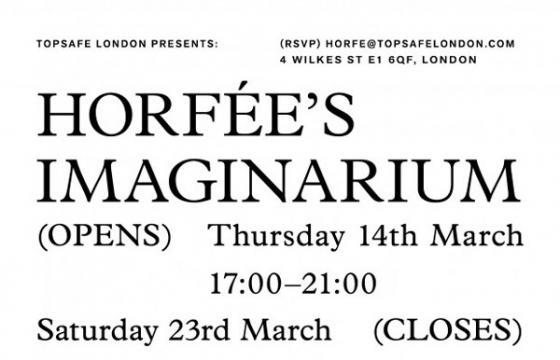 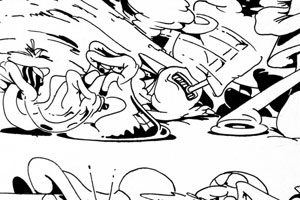 Topsafe London is pleased to announce Horfee’s debut London show, Horfee’s Imaginarium, opening in London on March 14th. Paris graffiti legend Horfe has left an indelible mark on the streets of his home city and far beyond. Enigmatic, tirelessly prolific, hugely innovative and obscenely talented, he’s earned a reputation across the world for his instantly-recognizable style and his audacious commitment to getting up... 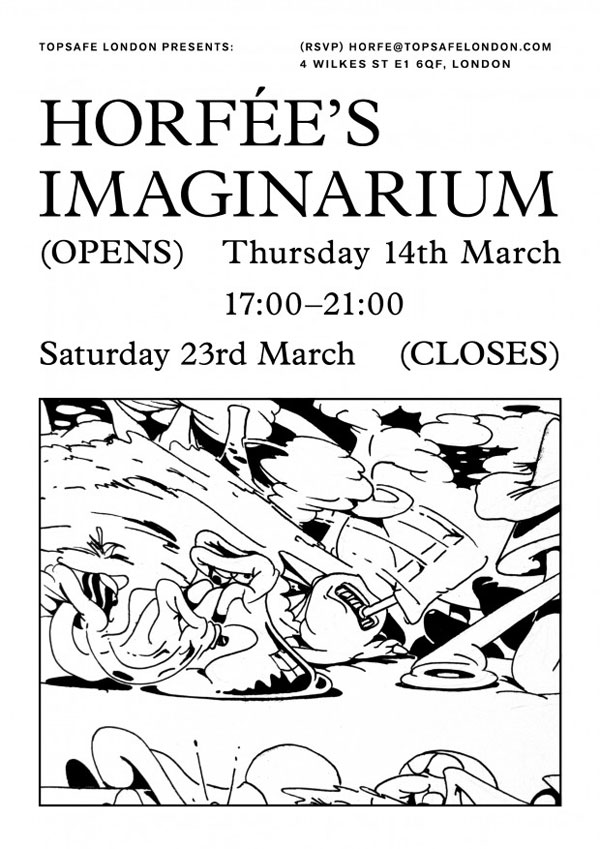 Topsafe London is pleased to announce Horfee’s debut London show- Horfee’s Imaginarium, opening in London on March 14th. Paris graffiti legend Horfe has left an indelible mark on the streets of his home city and far beyond. Enigmatic, tirelessly prolific, hugely innovative and obscenely talented, he’s earned a reputation across the world for his instantly-recognizable style and his audacious commitment to getting up. He’s a graffiti writer’s writer, whose illegal and gloriously idiosyncratic work has earned him recognition across the globe.

This month sees Horfe cross the Channel and cross seamlessly over into the world of high art, as he unveils his first ever London solo show with Topsafe London. Just don’t expect graffiti. “This show is not graffiti at all” says the artist. “I mean; I do graffiti outside, but to me, an art exhibition can't be graffiti. Graffiti is just not the same as ‘accepted art:’ it has to be illegal to fit that bill.”

Imaginarium is the culmination of Horfe’s lifetime obsession with drawing and making - on paper, on canvas, on wood and in sculpture - away from the streets, trains and rooftops that have made him internationally famous. The result is a ludicrously energetic collection of images and 3D pieces, all painstakingly executed by hand over many months. The show recalls graffiti, Horfe says, in the way that he has “taken all the energy I used to put into my illegal painting and focused it towards one goal: describing and organizing my aesthetic in a way that I can share with everyone, graffiti fan or not.” 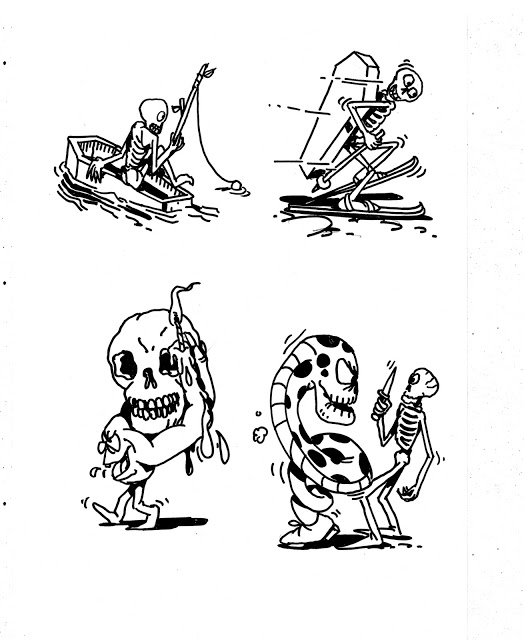 Influenced by everything from “the kids whose signatures I see in the streets” to obscene underground comics, Manga films like Akira and old Walt Disney movies, Horfe’s art is gleefully playful, dark and witty and brain-bendingly weird. It’s also masterfully-executed: the product of years of sketching and painting and a deep-seated, graffiti-influenced obsession with perfect ‘rhyming’ composition. All of the work in the show has been made specifically for the show; Horfe has ensconced himself in his studio and pushed himself further than ever before. He talks of going “into a sort of trance-state” while making these new pieces, forcing himself to work ceaselessly for long hours, being “100% dedicated to pushing my body to work non-stop.” He wants the cacophonic results to work on an almost sonic level for its audience, making the viewer “feel directly the effects of rhythm and rhyme, the visual noise in the work.” Everything in Horfe’s loud and lively work is shifting and writhing; “I just want things to move,” he insists.

Imaginarium is nothing if not kinetic: it takes the viewer on a wild fairground-ride of whacked-out imagery. Alongside Hokusai and Mike Kelley, Horfe cites early comics and animation geniuses as some of his biggest inspirations: Winsor McCay, Edmond-Francoise Calvo, Paul Grimault, Tex Avery, the Fleischer brothers and Osamu Tezuka. His show conjures the zany energy of early cartoons and catapults it into an eye-boggling and trippy hyperspace. “It's always in the psychedelic that I recognize myself the most” he says.

Horfe - Death is Home from ilovedust on Vimeo.

Horfe’s off-the-wall art carnival is a whirl of weird anthropomorphic figures and mental lurching machines. It manages to simultaneously be a response to the hustle and grind of city life and a surreal, grin-inducing escape from it. “It has to break reality codes” says Horfe of the new work; “It has to help me remember that it's only a question of will: pushing what you draw to other dimensions, volumes, distortions of the image.” Imaginarium creates a dream-space that’s a world away from po-faced ‘gallery graffiti’ or the heavy-handed didacticism of street art. It’s in a far-out world of its own. “The world needs artists to offer new perspectives to people with none” decrees Horfe. With his outsider’s view of the art world, his dizzying draftsman’s skill and his infectious sense of visual mischief, Horfe has given us a brilliant and barmy new perspective. One of Europe’s greatest illegal painters has transcended graffiti, gone legit, gone bananas and gone in, guns blazing, to a triumphant new place.