Fredericks & Freiser is pleased to present a survey of drawings made by Gary Panter between 1973 and 2019. The show features 29 works on paper, many of which have never been exhibited, and charts the development of this acclaimed draughtsman and formal thinker. The show will be on view from November 14, 2019 to January 11, 2020. 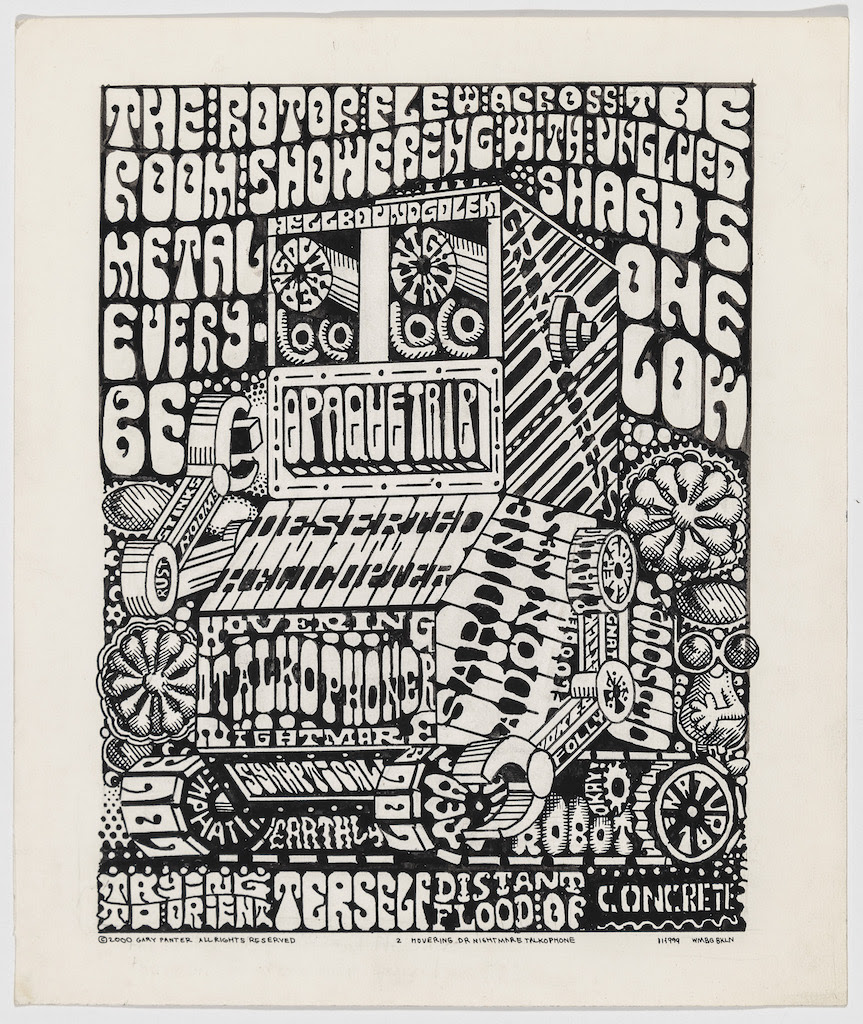 “The primary thing,” Panter has said, “is drawing.” Over the past 46 years, he has earnestly engaged with historical modes and contemporary expressions of art and culture, synthesizing his observations and obsessions into a graphically eccentric body of work. This exhibition focuses on his drawing activity—which encompasses comics, contemporary art, and illustration—and has as much to do with Picasso and H.C. Westermann as it does with 1950s gas-station signage and Big Daddy Roth. Mike Kelley called Panter “the most important graphic artist of the post-psychedelic (punk) period.”

Panter’s early drawings, made from 1973 to about 1977, were made during his time at East Texas State University, Commerce, and in Los Angeles, where he moved in 1976. Like Kelley, Panter was finding a way to carry forward the ecstatic, political, and grotesque visions of Oyvind Fahlstrom, the Hairy Who, and Peter Saul.

In Los Angeles, Panter developed his Rozz Tox Manifesto, a tongue-in-cheek futurist screed that exhorted artists to infiltrate the mainstream with subversive art. The manifesto was widely popular with underground artists of the time, and, though Panter was not a punk himself his drawings during this period, characterized by an angular and staccato line, exerted a strong influence on the scene. He befriended the Germs and the Screamers, for whom he produced an iconographic drawing that has come to represent the fierce exuberance of punk and has been widely reproduced. In the ’80s, Panter expanded on earlier iconography while further enriching his visual language. His drawings during this fertile period are particularly protean: one can see confluences with Basquiat, Baselitz, and neo-expressionist drawing. He also applied this dizzying array of techniques to comic book pages featuring his everyman character Jimbo, whom he created in 1974 as guide through ethical, cultural, and metaphysical ideas.

Panter’s psychedelic drawings of the 1990s are an attempt to summon the confused, idealistic spirit of the ’60s, which he only ever saw in a head shop on a childhood trip to California. He employs literary and visual genres—from horror to cubism to humor—as a way to generate material. So, when he makes a psychedelic drawing it is not design but a vehicle for invention and mark making. His abiding interest in hippie culture links, too, to the era’s underground comix, which he experienced just as the movement was winding down. His most recent work springs from a conceptual investigation into 1960s counterculture vernacular—the language not of, say, Robert Crumb but of regional Crumb-inspired hippie artisans. It is this mode that Panter employs in his most recent drawing, Fog Pad, which brings him full circle. Having influenced several generations of artists, he is returning to his art-obsessed roots, both digging into and reinventing cultural history through ambitious narrative drawing.