I was the Dreadloctopus: Contributing Editor, Joey Garfield, on the passing of Adam Yauch 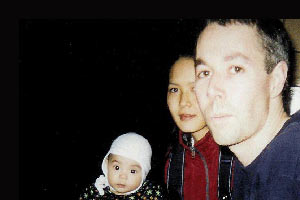 Juxtapoz contributing editor Joey Garfield, who collaborated with the Beastie Boys in the past, sent us a message he wrote about the passing of his friend, Adam "MCA" Yauch. The piece makes it quite clear; someone special was lost, and his reach as an artist and a man will live on with a very special legacy....

*
Juxtapoz contributing editor Joey Garfield, who collaborated with the Beastie Boys in the past, sent us a message he wrote about the passing of his friend, Adam "MCA" Yauch. The piece makes it quite clear; someone special was lost, and his reach as an artist and a man will live on with a very special legacy....

I was the Dreadloctopus monster from the “Intergalactic” video.

This news of Adam’s death hurts. A lot. It hurts because his life mattered to so many of us on so many levels that now that he is gone the void is so wide it’s hard to get perspective. Writing about Yauch has been a real struggle but I feel the need to share, not only as a contributing editor of an art and culture magazine, but as a friend, a fan.

In the early Nineties I was living in lower Manhattan. The worlds of music, art, graphics, fashion, graffiti, stickers, film, video, photography, and what was to become xtreme sports were connecting in front of my eyes in a very real and tangible way. I’ve never been so turned on as I was back then. A big part of this convergence for me was due to The Beastie Boys returning to New York from LA around the same time. They had a way of bringing everyone together. I suddenly found myself writing articles for Grand Royal Magazine, playing hoops in their weekly game and eventually appearing in Intergalactic in a giant dreaded octopus costume. I had minimal experience in all of the above categories but their “Do Now, Laugh Later” attitude was contagious. It was all a restless head, alive in New York City, could ask for. One thing I know for sure is if they hadn’t had me write for Grand Royal I wouldn’t be writing to you now for Juxtapoz.

Yauch always made me feel welcome when I came around. He was like a mischievous camp counselor led by the words “Why Not?” Why not rhyme about French Fries? Why not have a mutant octopus attack our robot spaceship? Why not free Tibet? This mindset had a huge impact on me and it pushed me to go further in many aspects of my life. I hope it does for you to.

I am thankful that he awarded me the role of the Dreadloctopus. The audition process was grueling and rehearsing the fight choreography was endless. I’m kidding. I just happened to be the only guy around whose head fit in the mask and Adam’s only real direction was “come out fighting.” But I can’t think of a better way to have been included in their legacy.

I will remember Adam for a lot of things but there are three moments that stick out to me presently.

The first was during the video shoot, Adam would laugh at the mistakes, mess-ups as if they were better than the result he was actually looking for. Laughing at himself seemed to come natural to Yauch. Mr. Hornblower?… maybe not so much.

The second is his walk. He had an awesome walk for a human. It was both laid back and slouched forward at the same time. You could spot him from blocks away.

And thirdly… On the way back from sneaking into the movie Walkabout (which I recommend everyone should see), I asked Adam about group dynamics and if it ever got frustrating for him. He said, “Everyone is adding something they like to the song. You may not like it but they do and you have to either deal with it or say something.” I didn’t realize this back then but what he said is one of the fundamental building blocks for compassion; you begin by understanding another person’s perspective and deal from there.

Live In Peace Everyone

*This shot was taken with a 3D stereo camera one evening after hoops probably around 1998? I had no clue that the .gif would be invented years later. It is dedicated to the whole Yauch Family.