Feature: An Interview with Chris Sollars 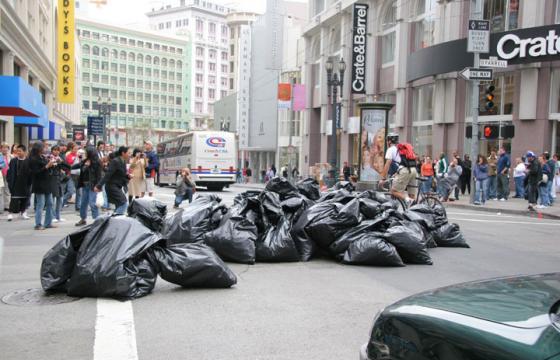 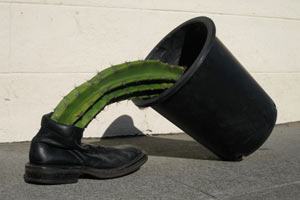 Artist and director of 667Shotwell, Chris Sollars work revolves around the reclamation of private and public space through interventions. The results are documented using drawing, photographs, sculpture, and video that are integrated into mixed media installations. Awards include 2007 Eureka Fellowship Award, a 2007 San Francisco Bay Area Artadia Grant, and 2009 Headlands Center for the Arts residency. 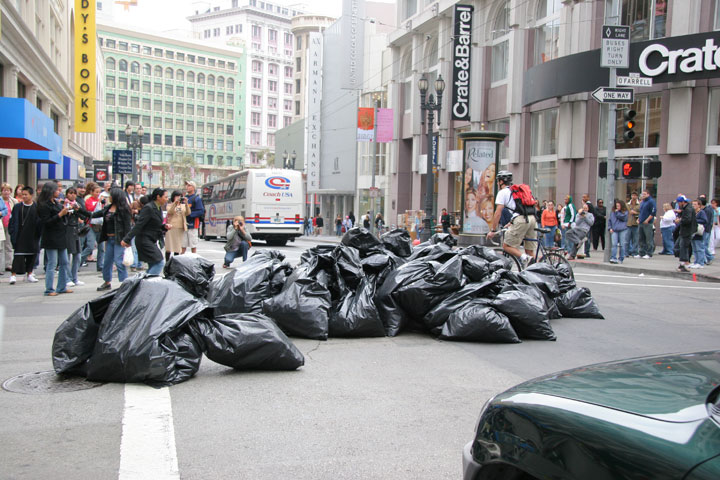 Sollars in 2008 completed C RED BLUE J which screened at SFMOMA on Election Day and was included in CREATIVE TIME’s Democracy in America show at the NY Park Armory. Recent exhibitions include 2011 Bay Area Now 6 at Yerba Buena Center for the Arts, and Trash at the new children's museum in San Diego. All of Sollars' work is sorted chronologically by category starting in 1996 as a record of his practice regardless of failure.

Max Karnig: What are your inspirations? How do you usually move from idea to idea, project to project?

Chris Sollars: The street and the immediate space around me influences my ideas directly. My work takes inspiration from a range of art from Bruegel & Durer, to Duchamp to the Diggers & Yippies; Fischli/Weiss, Gordon Matta-Clark, Nauman, Chris Burden, David Hammons, Ana Mendieta, Paul McCarthy. Pipilotti Rist, Kim Jones, Acconci, Adrian Piper, Kaprow, Paul Kos, Bruce Conner and other 60 & 70s artists: that showed or made their work within the world / public spaces immediately within everyday life and often using their body as material. All my early videos in the street of performances are also influenced by Skate videos I grew up watching in the mid 80's to early 90's. More recently I've been influenced more and more by filmmakers. I work both physically and conceptually. I let my stream of consciousness flow and write down all the weird ideas that come to me for any project / subject that I am focused on, or work directly on the spot with intuition. I investigate material as a subject or process. 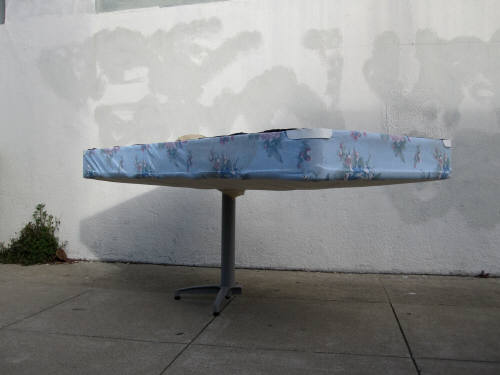 One of your projects that stood out to me was your "Left Behind" series of ready-made sculptures that you created from materials literally left behind in the streets of the Mission district in San Francisco. This process of finding objects, working them into a sculpture, documenting it, and then leaving it behind once again is a unique and interesting approach. Is this something you have continued to do? What are your thoughts on it after working on it for a while?

The left behind series started in 2009 after working on a video project that took four years to complete I wanted to get back to making and working quickly without any attachment to the end result. I wanted to work without a budget for materials and without a physical space to experiment, I went outside.

Also after studying sculpture for undergraduate and graduate school I wanted to challenge both myself and other "great" sculptures I'd been seeing in books, galleries, and museums. There is a satisfaction that comes from this unexpected audience that have to deal with these objects in space, they can avoid, destroy, or yell at me the maker. Its a different viewing experience than art spaces with predetermined rules. I don't have to wait for that audience in the street, and I know I've hit something when someone laughs or glances with a look that they get it.

I consider these public sculptures even though they are not permanent. It also got me excited with the possibility of what can go together. After spending a lot of time video editing, this same editing process has affected my sculpting through juxtaposition of two dissimilar elements/objects/materials to make this form and create an unexpected outcome. The parts of the sculptures are determined primarily out of physical function / support and through the components build a comedic narrative. Especially where they are placed. These sculptures are as transient and time based as the materials folks put out in front of their homes and into the street. The photos of the sculptures are displayed digitally or hopefully at some point in book form. Some examples of these sculptures were done as interventions at SFMOMA and shown on the SFMOMA blog through artists Brion Nuda Rosch in 2010.

i continue to make these and go back out for a walk in the neighborhood when I need that inspiration or have that desire or simply when I see stuff. By now I also react immediately to materials or objects I know can work fit together and where they can be placed, If I connect the dots or get inspired one gets made and is added to the series. 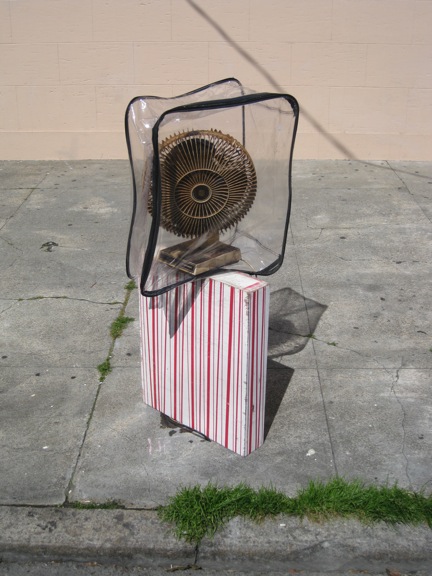 Some of your more performative works also seem to have a similar use of materials and sense of humor. The trash bag outfits where groups of individuals entirely disguised in black plastic trash bags moving in masses from place to place in the city are particularly amusing. Could you talk about those a bit and what it was like to do those performances?

My process of making is fun. There is a joy in making and that comes out in the work. The Pile of Trash works came from wanting to feel/exist as a pile of garbage. What is its point of view? Trash might be the focus, but I'm not making a declaritive statement or message about it. I do like having it be visually and physically confrontational for people. I did Pile of Trash solo in 2002 and when my sister was working for the Bush Administration in the Department of Energy I decided to make the pile larger. So I did it again with larger groups in 2005 in San Francisco and in 2011 in San Diego. Trash is funny, ridiculous and very disturbing. These elements get exaggerated when I animate the trash with people inside the bags. I started performing in public space in 1997 with Street Clean. I picked up trash washed it and put it back. I never announced "this is a performance / intervention." It starts and I stay in "character", never calling it art in public space, in order to let folks deal with the action as I am doing it. There is exhilaration and ability to confront people in performance, especially when you don't talk in Pile of Trash and are purely using body and gesture. When I make the left behind sculptures I also go through this change in consciousness of having to work publicly in front of others. Even when I make the sculptures I don't talk or engage with others I let the objects communicate for me. Its like, "i'm in the zone and don't disturb me." 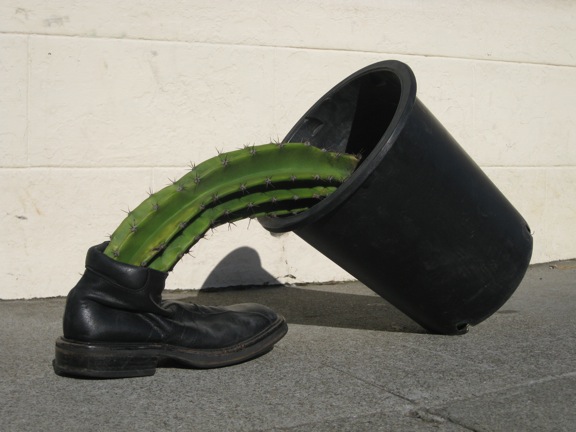 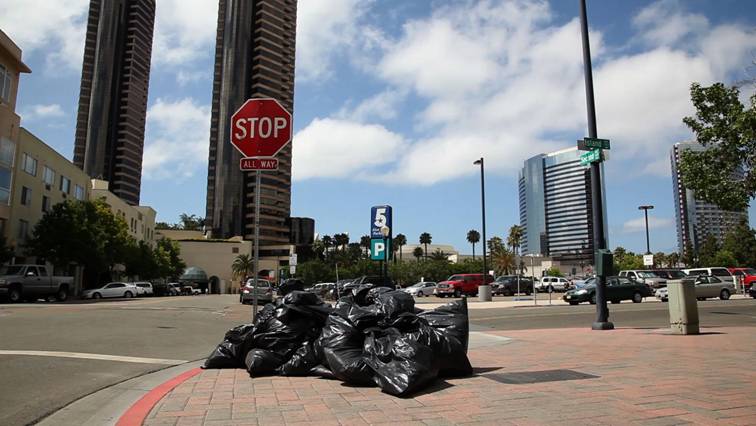 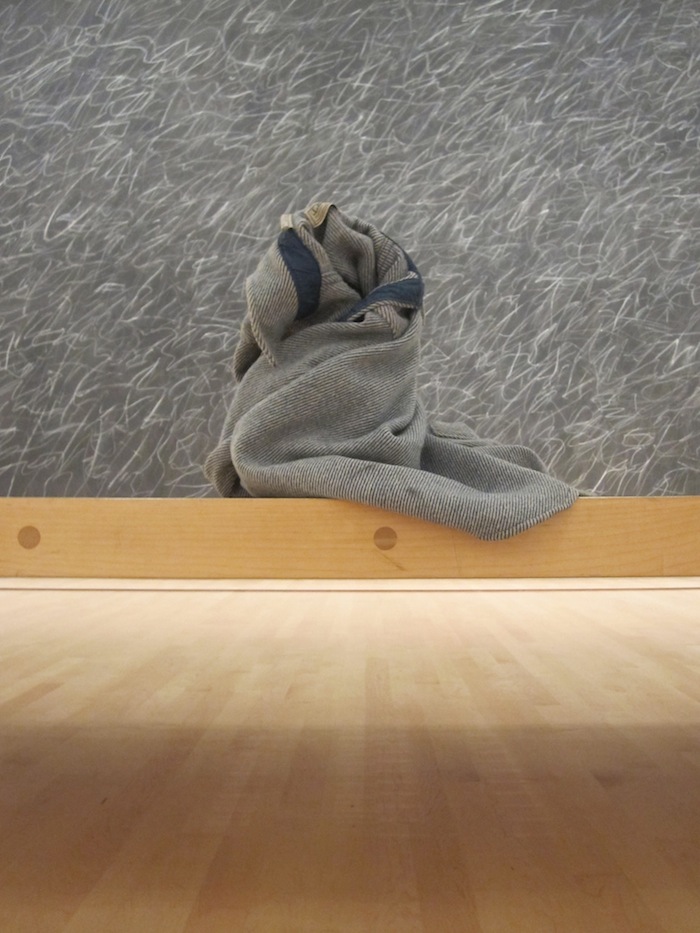 It begins with beard as material and everything that you can make with a beard, I got this idea to rub my beard on everything around the house and have those objects changed. It's a question of what you can do with a minimum gesture or elements for a maximal output. The axe shave came from loving this axe I found in Maine and thinking of works I could make with it. I tried this performance in the woods of Maine when I was 22, but couldn't grow a full beard and in 2011 I had it professionally sharpened razor sharp to shave with. I like the humor, awkwardness and tension that it creates and how it unnerves people.

Hair was something friends were identifying me by and I wanted to alter their perception of me and in the process save these elements or my hair for later. The idea is that this artwork would not be complete until I put the wig back on when I am 64 wearing my hair from when I was 34. 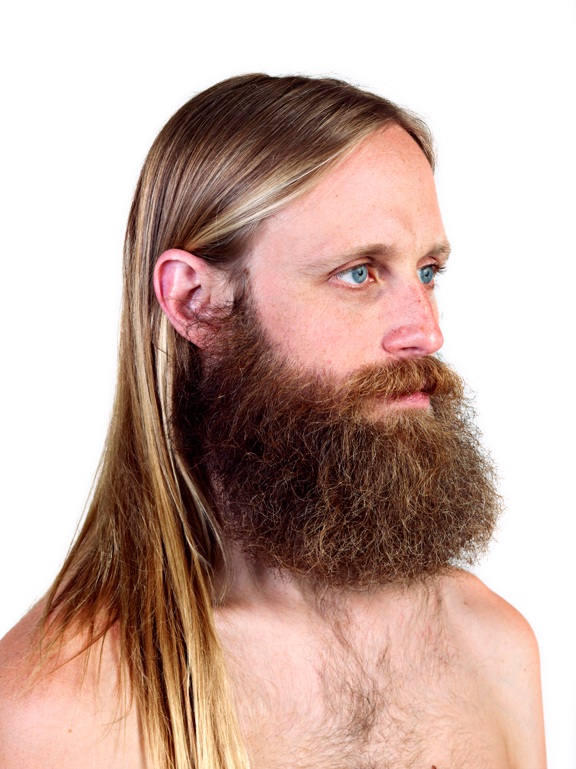 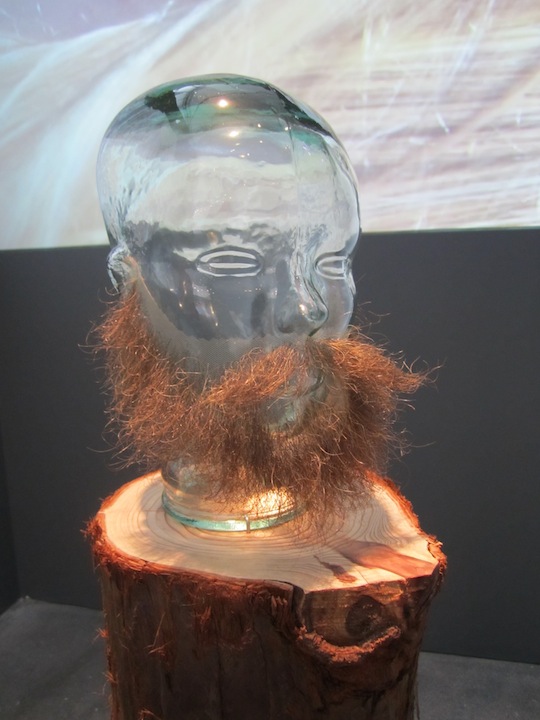 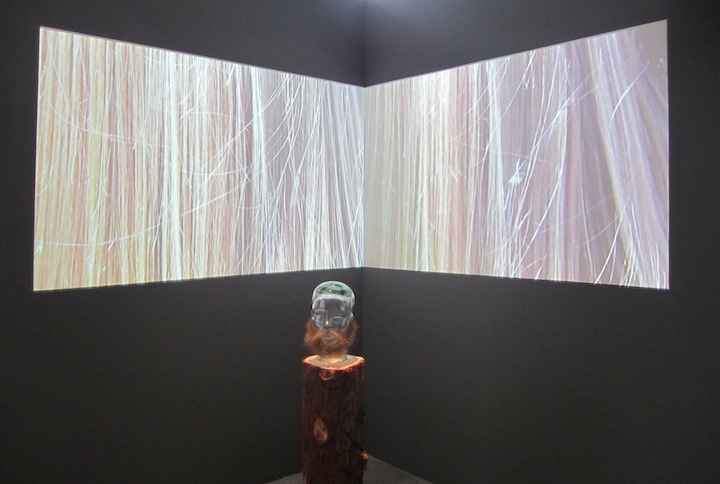 How do you feel about San Francisco and working here as an artist?

San Francisco was always a city that is bigger than Providence where I studied and moved from, but smaller than New York. In San Francisco my art is far enough from major Art institutions that allows it and me to be free from limits of what type or for whom my works should be considering. I don't need a car and that allows me to have a grip/control of what I can do. The community is supportive and the artists and music here keeps me very inspired. There is a lack of economic support and affordable studio space for artists here, which makes it hard. Especially with the Dot com 2 happening here and those dollars are not translating to art dollars for me or friends. Porsches and homeless camps next to each other in my neighborhood. A complete collision. A lot of friends have had to move to the east bay or not have studios. Which is what has also influenced which work I make and where. I do have friends in other cities I keep in touch with too to stay grounded and connected to art outside the Bay Area. In San Francisco the cross generation conversations happen naturally out here. I'm very lucky to have a friendships with older generation of artists that have informed the work I make and inspiring to have students that are hungry to tackle current world and make work about it. 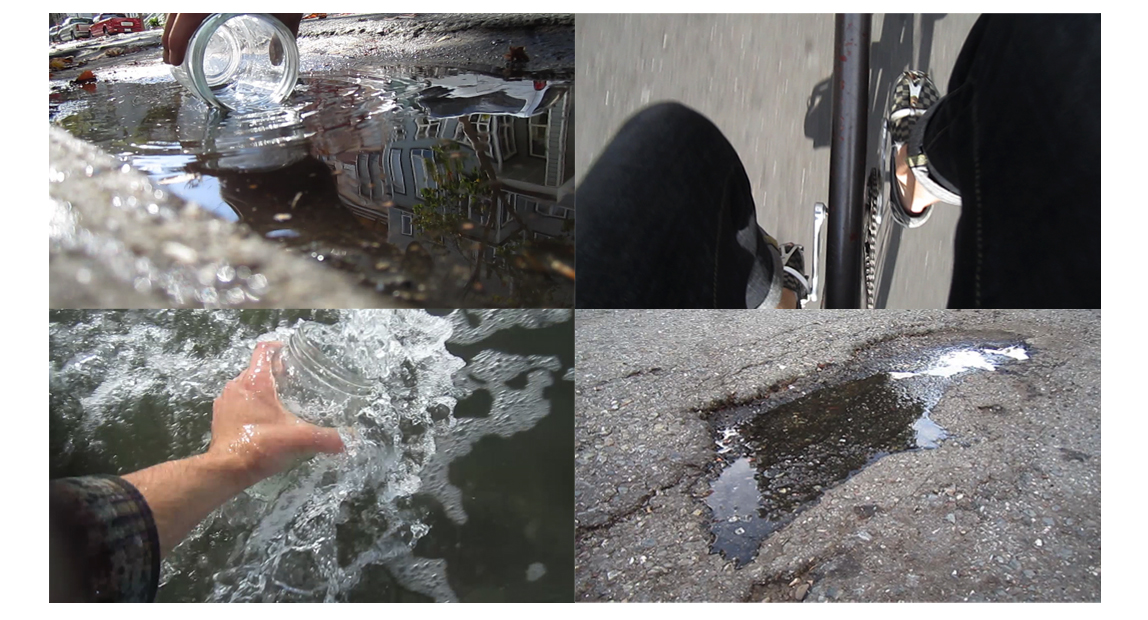 What is coming up in the near future?

I am beginning Street and Water works in or around San Francisco. I'm on land more than water and want to change and explore this. Water surrounds the city and I want to spend more time with it, which is what I'll be doing this summer. .