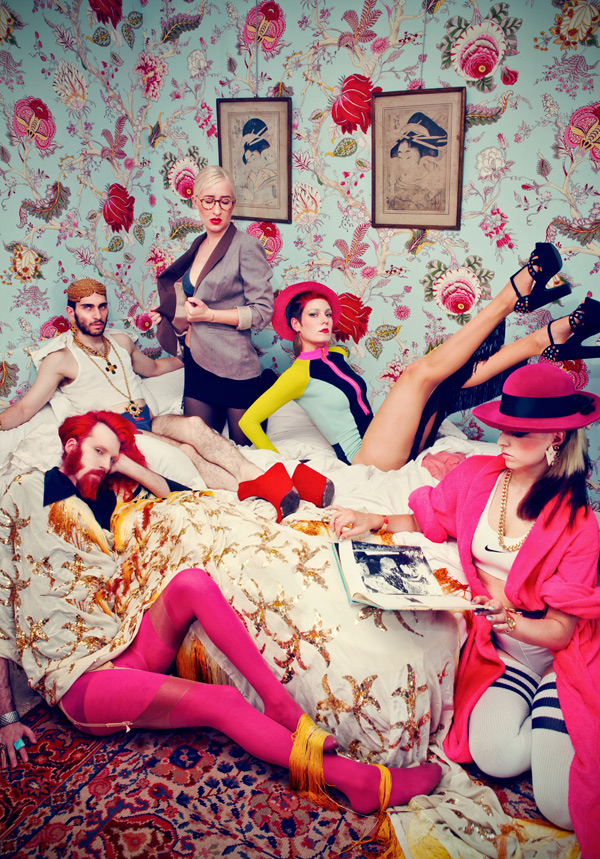 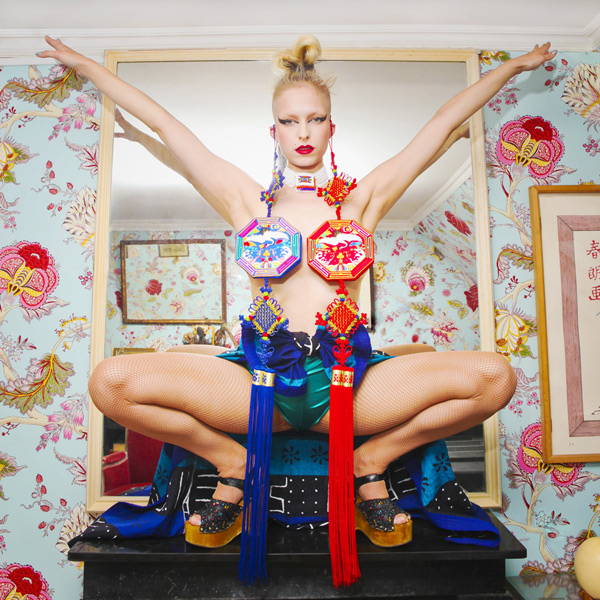 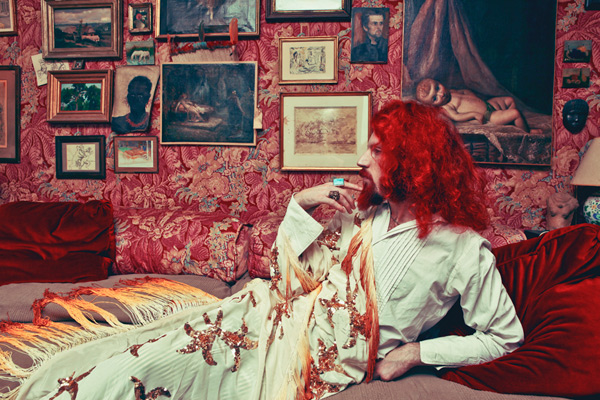 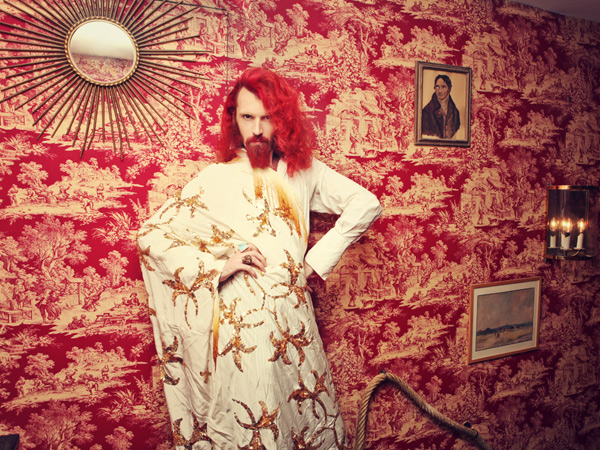 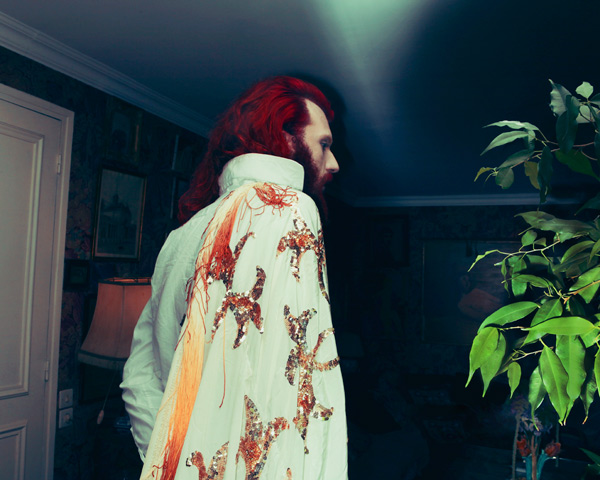 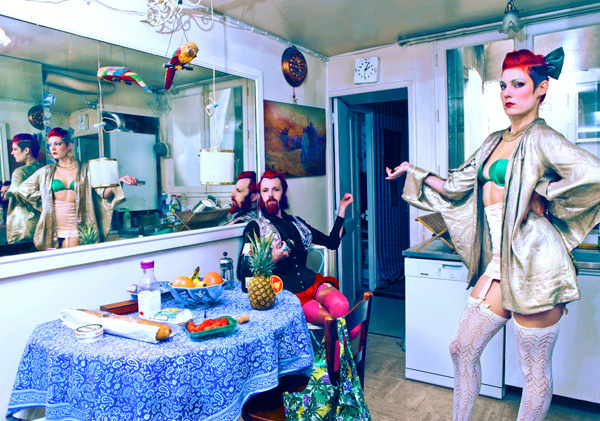 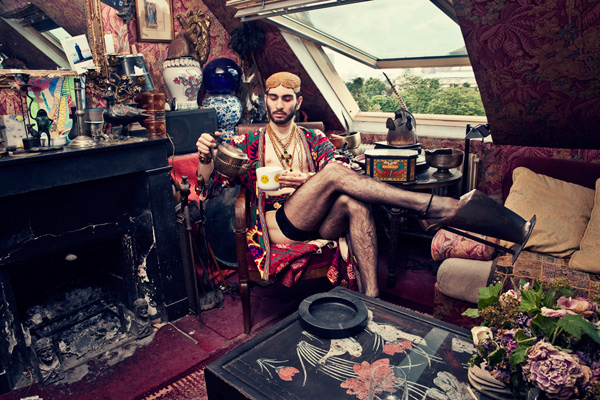 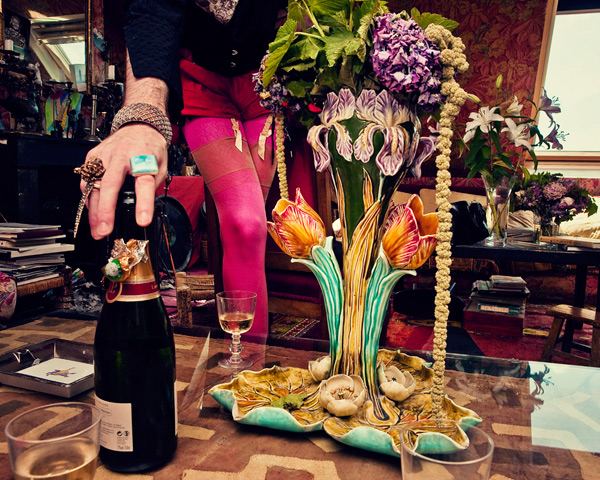 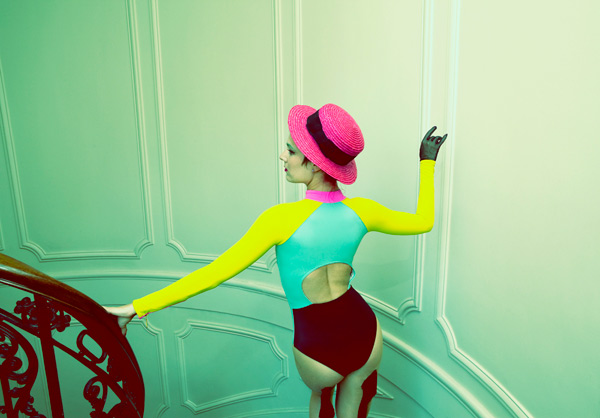 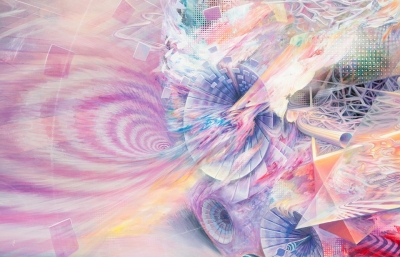 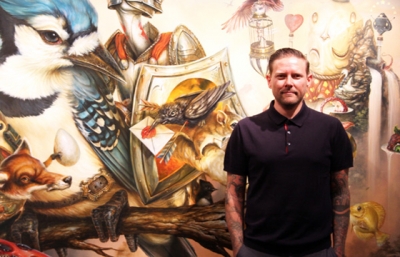 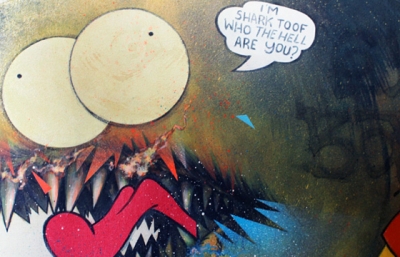 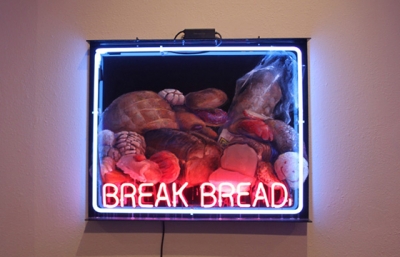 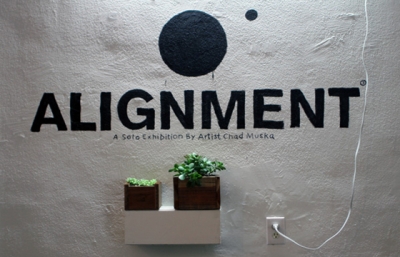 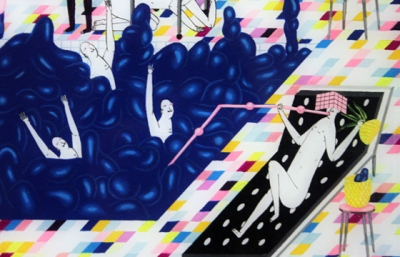 “Eat Cake” is a large format photographic series depicting French performance artists, House of Drama. Young met the troupe, which typically perform in the Paris underground night scene, in a basement lounge during Miami Art Basel and followed them to their hometown Paris to create this series. Inspired by still life painting, Romanticism, and magical realism, the work addresses conventions of sexuality, class, and culture. The subjects role-play in a bohemian bourgeoisie apartment in Paris. In some images, they parody traditional husband and wife roles, in others, formal family portraits. In Igor Brewing, Igor casually pours tea, resplendent in 10-inch homemade welded stilettos and thigh-high hosiery. In Ylva in Bloom, dancer Ylva poses spread-legged atop a mantle – one part ornamental Goddess, one part provocative study on female subjugation. The outcome is a colorful exploration of identity and self-expression, art and artifice. Employing their own bodies as canvases, these performance artists become ‘tableaus vivants,’ living pieces of art.

Born in Sydney, Australia, 1982, Faith-Ann received her Bachelor in Arts at Barnard College, Columbia University, in New York City. Inspired by photographers such as Diane Arbus, Nan Goldin and Ryan McGinley, she began her photographic career chronicling the gritty underground music and arts scene in downtown Manhattan in 2007. Since moving to Los Angeles in 2011, she shoots majority of Justin Timberlake’s behind-the-scenes photography, as part of his creative digital team, while freelancing for multiple publications. A long admirer of magical realists like Frida Kahlo and writer Isabel Allende, she endeavors to capture the surreal within the real world in her photos and has a predilection for bold colors and dramatic backdrops. “Eat Cake” marks a critical shift from straight documentary style to more stylized Fine Art portraiture. Acutely aware of today’s growing visual culture, her goal is to create a portrait of a generation of fearless creators, thereby inspiring others to live fully.

Her editorial work has been published in Dazed and Confused (UK), Rolling Stone, More Intelligent Life, The Economist, Fast Company, and Dwell.