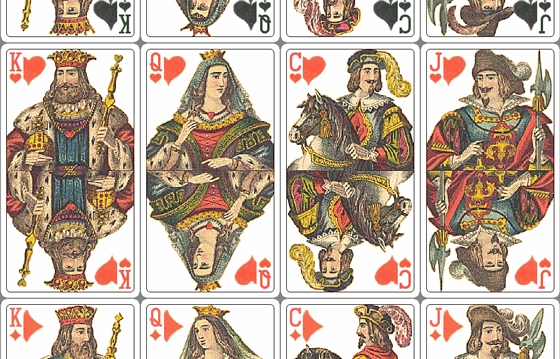 One of the most versatile items ever invented is the playing card. The number of decks sold each year is staggering; the US Playing Card company alone sells more than 100 million decks to individuals per year and another 20 million decks to casinos. The number of games played with standard playing cards is impressive as well. Pagat, one of the largest collections of card game rules on the internet, lists more than 1,200 games, not including solitaire and newly invented, but not well known, games.

Nearly every game in the casino involves playing cards. Cards have been used as currency, teaching aids, and are a staple of every magic act.

It is also difficult to find an item with such a simple design that is imbued with such symbolism and mysticism. The court cards have been used to show respect and pay homage to political and religious figures. The various suits represented everyday items and their relative “power” in the relation to one another. They have been used to divine the future, and to tell contemporary religious stories.

A Brief History of Playing Cards

To understand how the standard designs of today’s playing cards came about, it is necessary to look at card origins.

India and Persia are the most likely birthplace of our current playing cards. It is in this area in the 11th century that the different suits (up to 32 in some cases) and the court or face cards began to show up. While the familiar rectangular design was prevalent even then, various cultures began to experiment with the design. Indian playing cards, for example, were round. 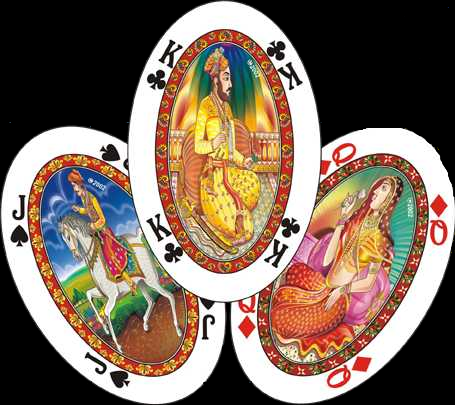 It is during this time that artists began to experiment with the various graphic designs. The “court cards” have existed for centuries but have not always been face cards. Early Persian cards have abstract designs and calligraphy, but do not depict people. (This is most likely due to the Sunni Islam proscription against doing so.)

Playing cards arrived in Europe in the 1300s. It was there that the current royal court cards were introduced and where the various elements that eventually led to today’s standard playing cards occurred.

Originally, the cards were made by hand and were often hand painted, a time intensive and expensive process. In the early 1400s woodcut printing became popular and became the main method of making cards. Playing cards were rivaled only by devotional images in terms of popularity. The decks were still colored by hand.

Throughout France and Germany companies dedicated to the manufacturing of playing cards were started. These card houses, which were appointed and regulated by the respective governments, became the main sources of playing cards throughout Europe and the UK for centuries. The suits and court cards became standardized and have remained relatively unchanged. The “Knave” which was designated as “Kn” was changed to the “Jack” but did not change in rank. The most recent change to a standard deck of cards occurred in the 1800s in the US with the introduction of the Joker. However most card historians do not consider this a significant change since the card has no rank or value.

With the suits, ranking and court cards standardized and considered to be in the public domain, the design of the cards and the artwork began to garner the most attention. Due to the aforementioned popularity of playing cards, attempts to make playing cards better and to use them as a form of artistic expression has remained strong for hundreds of years.

The first major design innovation was the introduction of the indices (the value of the card) on the corner of the cards around 1693. This design change made card games easier to play as players could now hold their cards in one hand in the now common fan style and still be able to tell their value.

In 1745 a French card maker came up with the idea of making the court cards reversible (meaning they looked the same regardless of the direction of the card in the player’s hand.) The logic of this design change seems sound as players no longer had to turn the cards in their hands in order to see the rank an act which gave their opponents valuable information as to their holdings. Despite the logic behind the design change, the French government, which regulated the printing of all playing cards, prohibited the change.

However, by the end of the century the reversible decks were standard throughout Europe, Great Britain, and the United States, and soon were allowed in France.

The back of the playing cards were the first place where artist expression was first expressed. Designers began to experiment with abstract designs and artwork. The artwork was often used to promote specific activities and themes. This trend had a practical purpose as well as it helped to hide wear.

This design change resulted in the growth of playing cards being used as travel souvenirs, promotional items, and expressions of particular personal interests. The variety of back designs has also been a large factor in the playing card collector arena.

As stated earlier, the popularity of playing cards has supplied a steady demand for new, innovative and artistic designs.

The only non-standard card in a modern deck is the joker. Since the card has neither historic origins nor value it has long been the first place for designers to show their artistic innovations. Companies have long used the joker as their trademark card. The joker is also frequently discarded along with the advertising cards and therefore has become a favorite of card collectors. 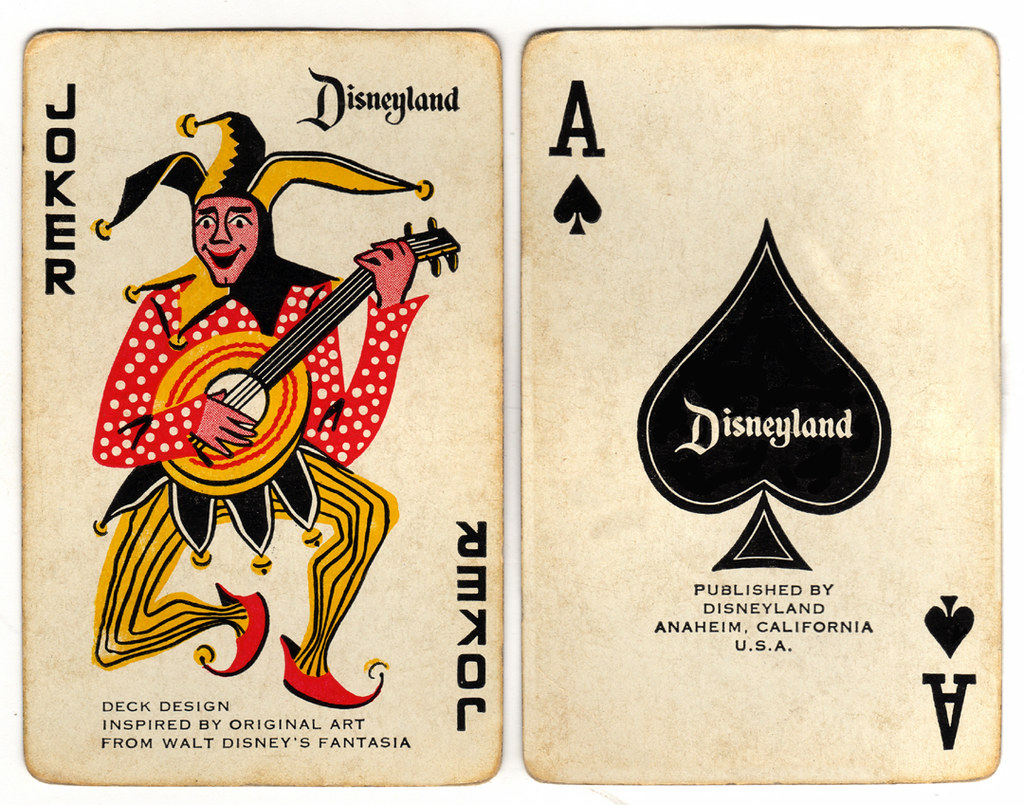 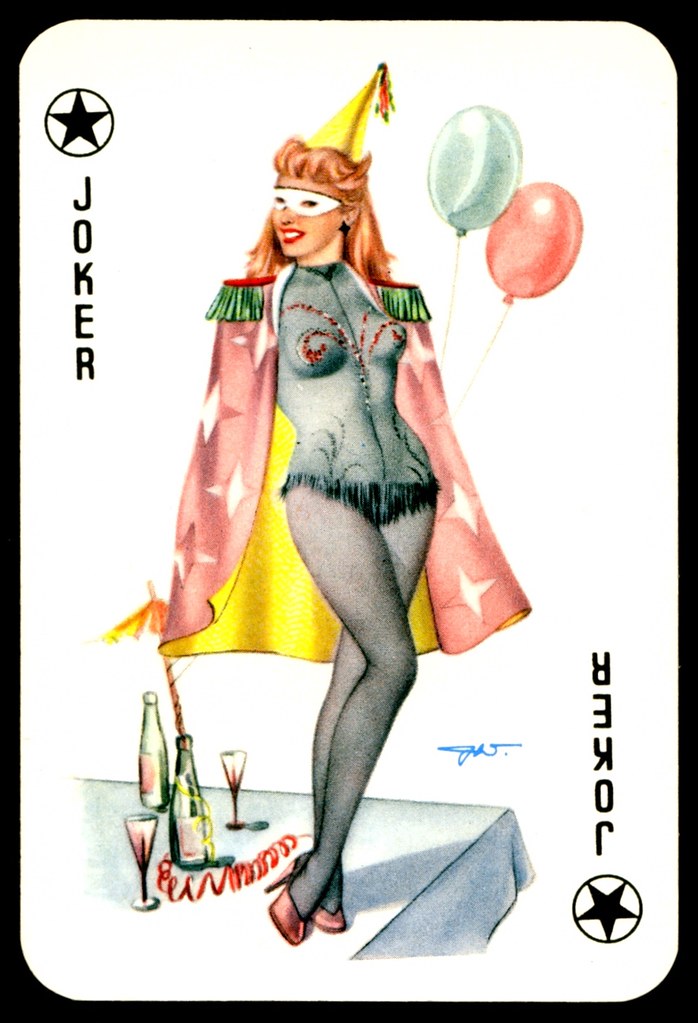 Reproductions of historic card designs are fairly popular. The US Old West and Civil War era cards are especially popular in this regard as examples of the originals are widely available.

New innovative designs have proven to be very popular as well. In 2011 a graphic designer quit his day job and launched a Kickstarter campaign to bring his new playing card design to the market. He raised almost $150,000 and launched a very successful company which sells new editions of his cards along with company merchandise.

The goal of making card playing accessible to all has resulted in many design techniques. Some of these innovations include jumbo index cards, four-color decks, and super jumbo index decks. One of the surprising uses of accessible decks is that super jumbo indexed decks are often featured on live dealer tables, which makes card dealing easier for the croupier. 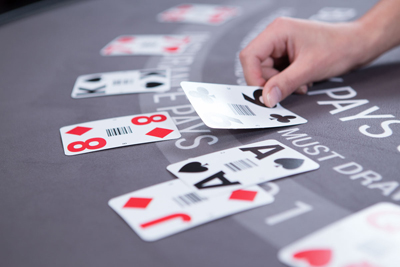 It is interesting to note that the design for Braille decks is not standardized.

Other innovations over the past few years have included waterproof decks, clear decks, magnetic decks and luminescent decks that allow players to play in the dark.

While playing cards come in two standard sizes, poker and bridge, there is not set size standards for playing cards. This has led to designers frequently experimenting with sizes and shapes. This has led to decks barely larger than a postage stamp to cards that can be measured in square feet. The Indian circular design has reappeared and cards whose shapes would make Dali and Picasso proud are also available.

The World Series of Poker in Las Vegas is the largest poker festival in the world. Each spring, poker players in the tens of thousands descend on the city in hopes of claiming a share of the millions in prize money that is awarded.

In 2007, Kem was chosen to design the cards used for the tournaments. The goal was to provide a long lasting durable deck that was easy for the players to read. Kem also hoped that the new design would prove popular with other casinos and home game players.

Unfortunately once the cards were in use, it soon became evident that the design was a complete failure as players had difficulty distinguishing a six from a nine.

The cards were quickly replaced and the casino’s regular cards were put into play much to the delight of the players and the chagrin of the manufacturer.

Card games are more popular now than in any time in history; a trend that shows no sign of being a victim of the digital age. This provides innovative and creative designers a chance to create 53 (counting the joker) small works of art.