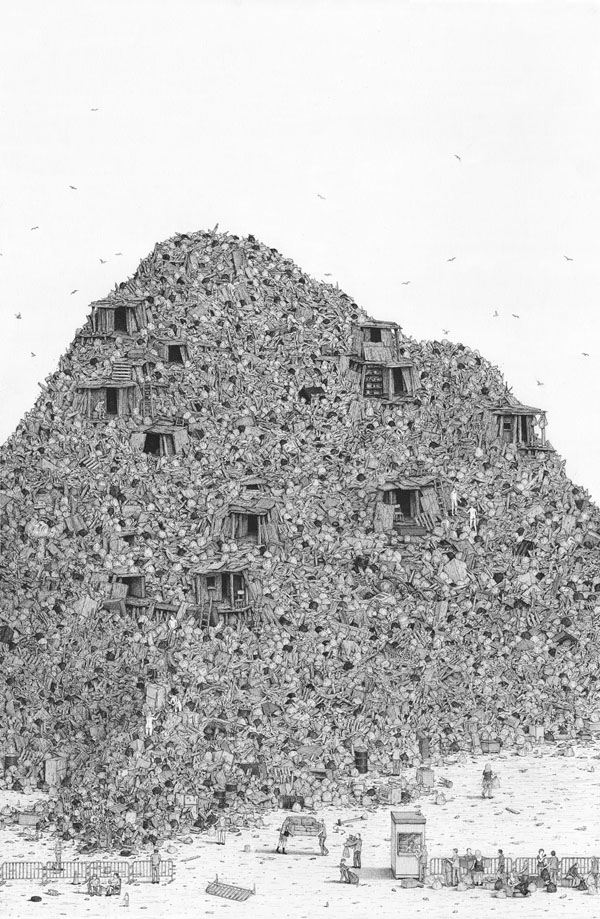 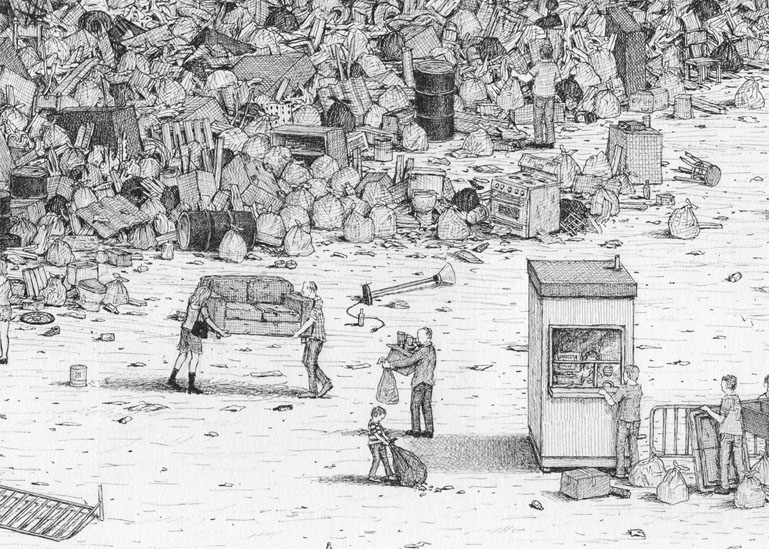 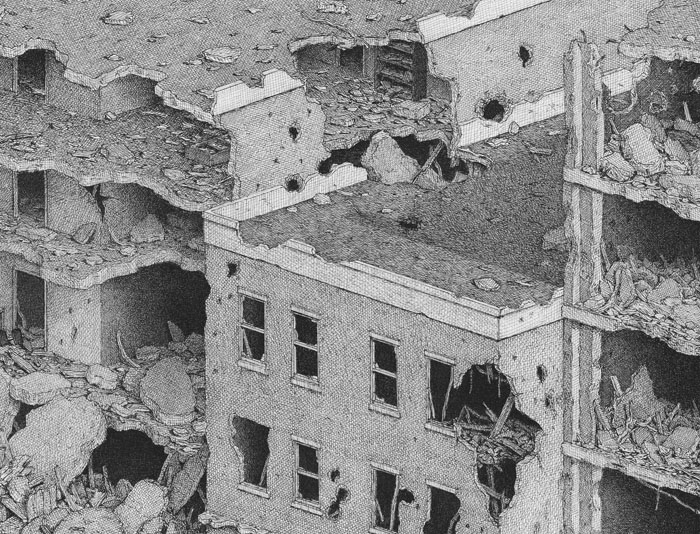 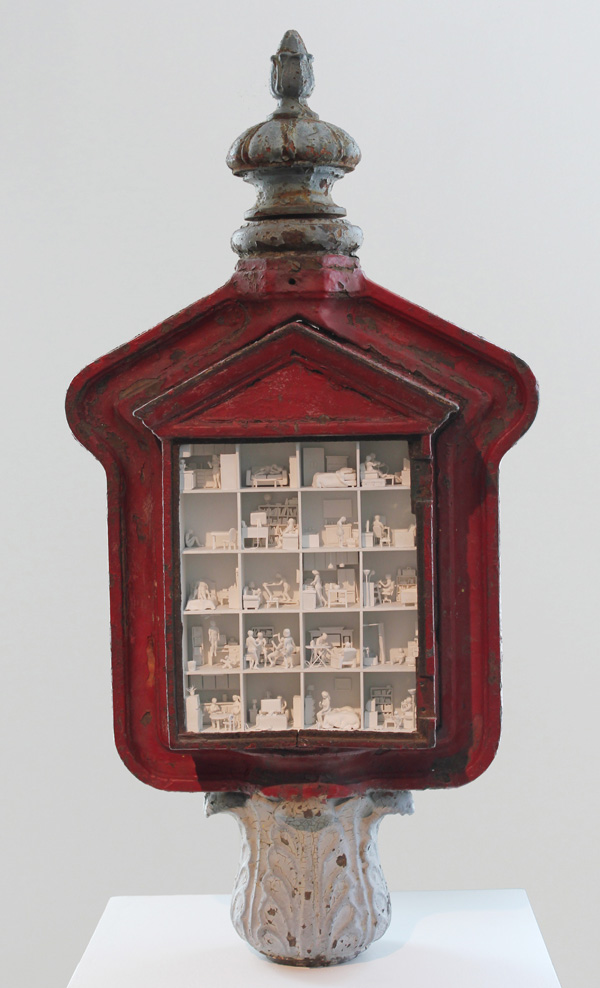 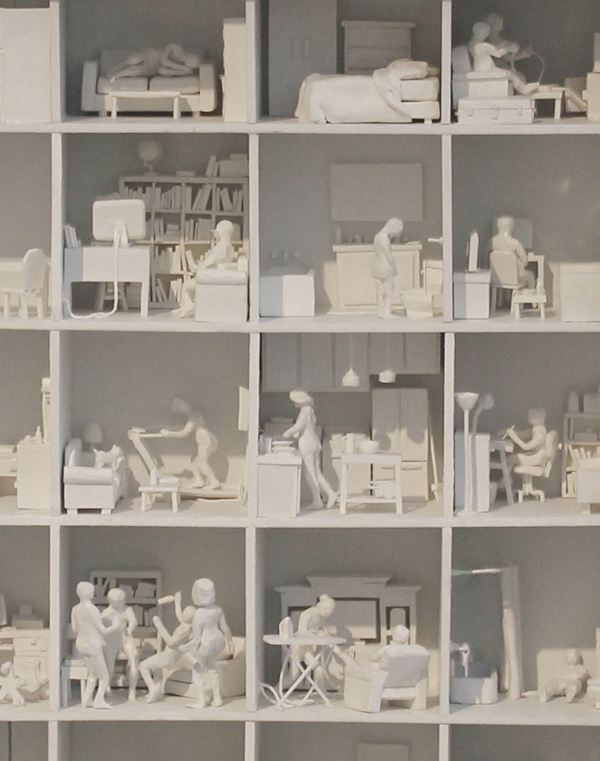 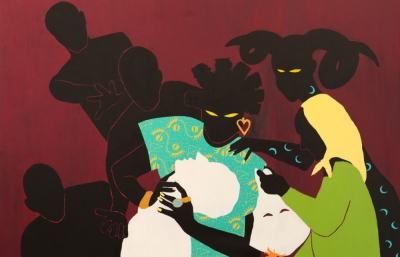 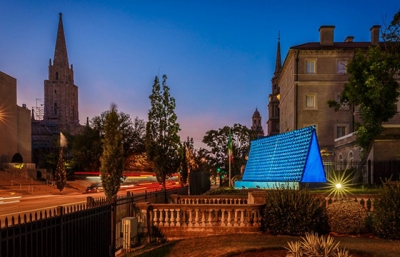 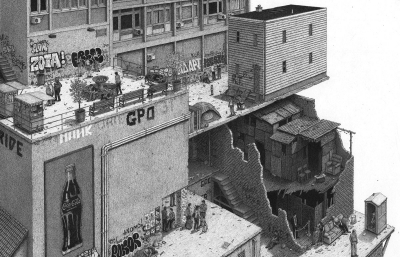 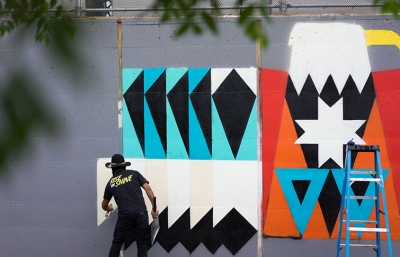 Pow!Wow! Takes Over Washington, D.C. with 15 Artists Painting Around NoMA: A Recap 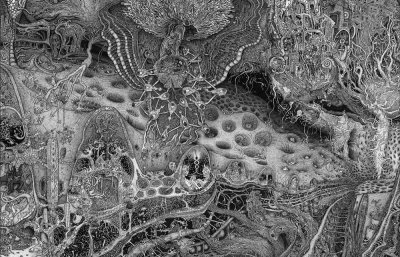 Ben Tolman creates densely rendered ink drawings depicting multi-tiered dramas of urban life. Reflecting on patterns of behavior within our constructed environments, he explores a wider view of the extraordinary systems that shape our society.

Following three nearly sold-out shows, Tolman opens his fourth solo in our nations capital: “Civilized” at Flashpoint Gallery on February 27th from 6-8pm. The show is comprised of one sculpture and nine recent drawings. There are three large vertical compositions, each measuring 76x50 inches, and six mid-sized drawings at about 40x26 inches. Tolman found an abandoned call box from the old fire reporting system and fashioned sixteen tiny apartments with furniture and hand sculpted manikins inside the space.

I stopped by Tolman’s studio at the Freezer, an enormous back-alley warehouse aptly named for its frigid winter temps, and was given a wonderful tour of the show’s production. Each drawing begins with the rudiments of a spacial concept, be it a shanty town, a sky-rise modern industrial building, or an alley. With an architect’s precision and MC Escher rule-bending perspective, Tolman constructs multi-leveled stages for human action.

Tolman’s stream of consciousness flows out onto the paper as a matrix of increasingly emboldened hatch marks. In these compositions of urban landscapes bedazzled by a variety of building surfaces, often crumbling and graffitied, one finds a human zoo of where’s-waldo surprises. Tolman’s imagination fills the various rooms and spaces with his keen sense for situational humor. The various scenes represent quirky truths of the complex strata of our society. Many spaces are inhabited by little clothed and naked-butt men and women. Some people are busy doing naughty things around a corner, while a few doors down there might be a parade of suited men in rabbit masks marching by.

In the upper right hand of his drawing titled “SOME” a few people obliviously enter an H&M while a crowd of protestors clash with riot police just a few steps away. Heading into the lower levels of structural elevation we observe society getting rougher and more desperate until we reach the lower alleys populated by rhino-sized cockroaches.

Each of the smaller drawings are named after prominent wall graffiti depicted in the composition. For example, one of my personal favorites depicts a shanty town built with the most wonderful mosaic of nailed boards is titled SAMO. -David Molesky