An Interview and San Francisco Visit with Nychos 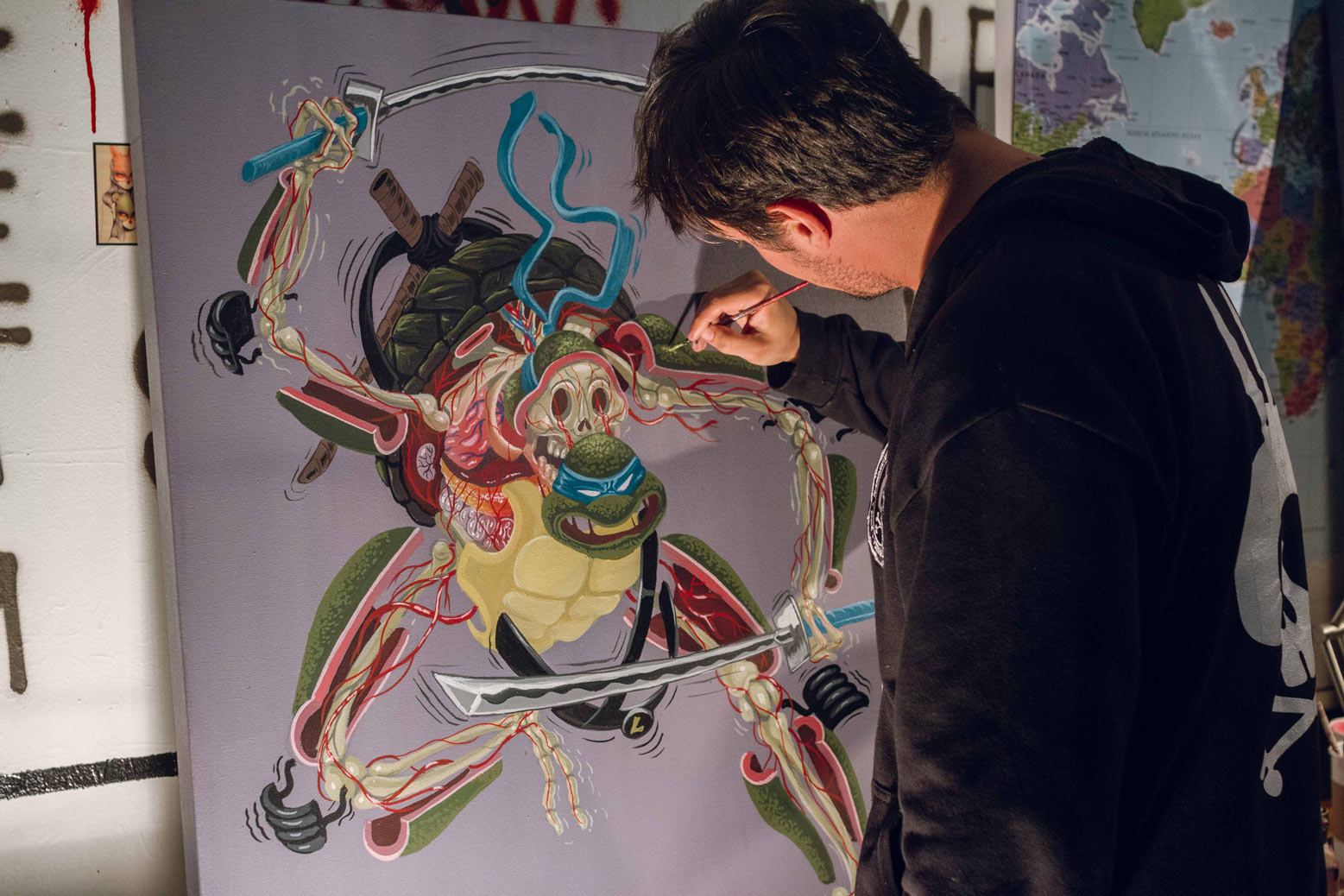 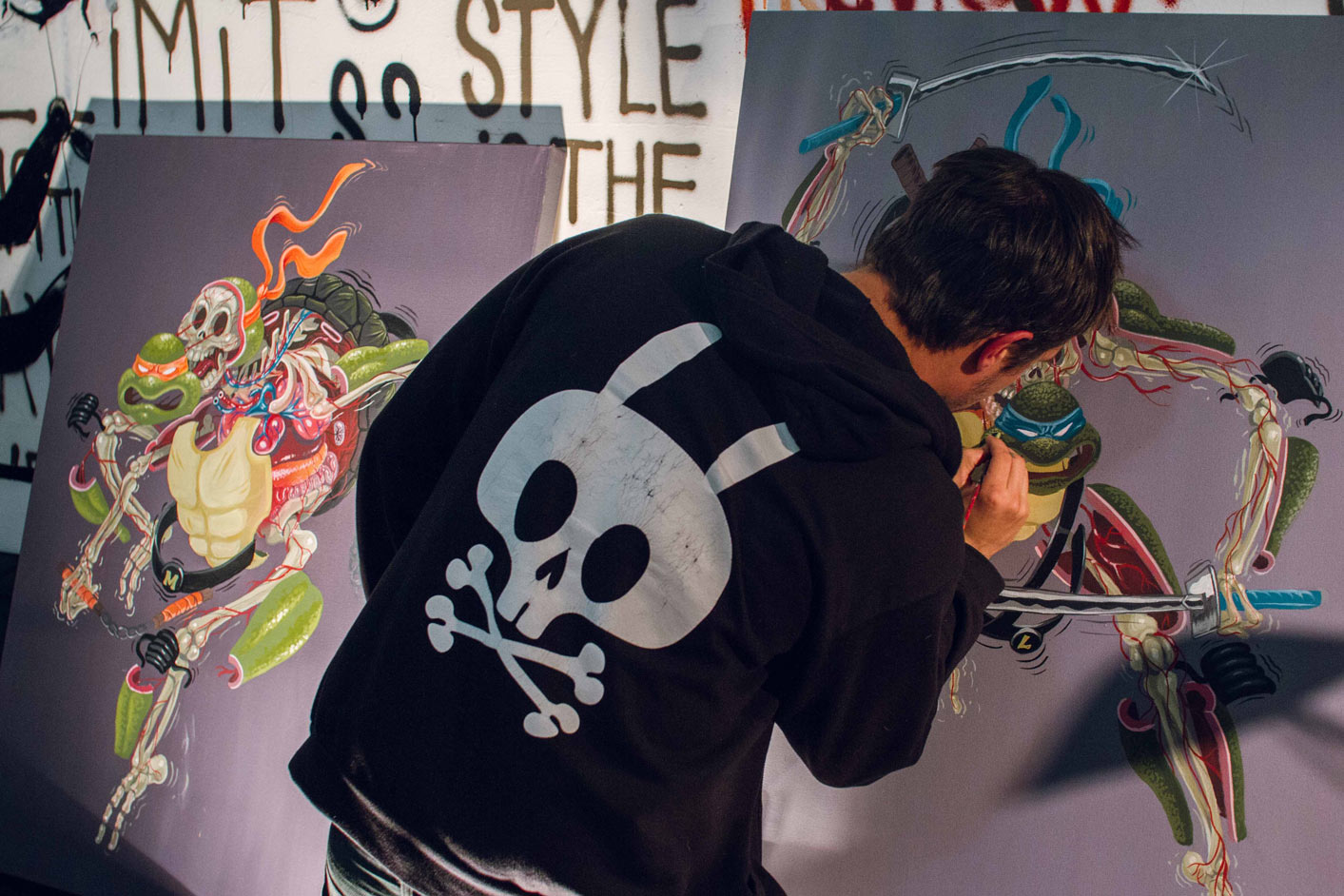 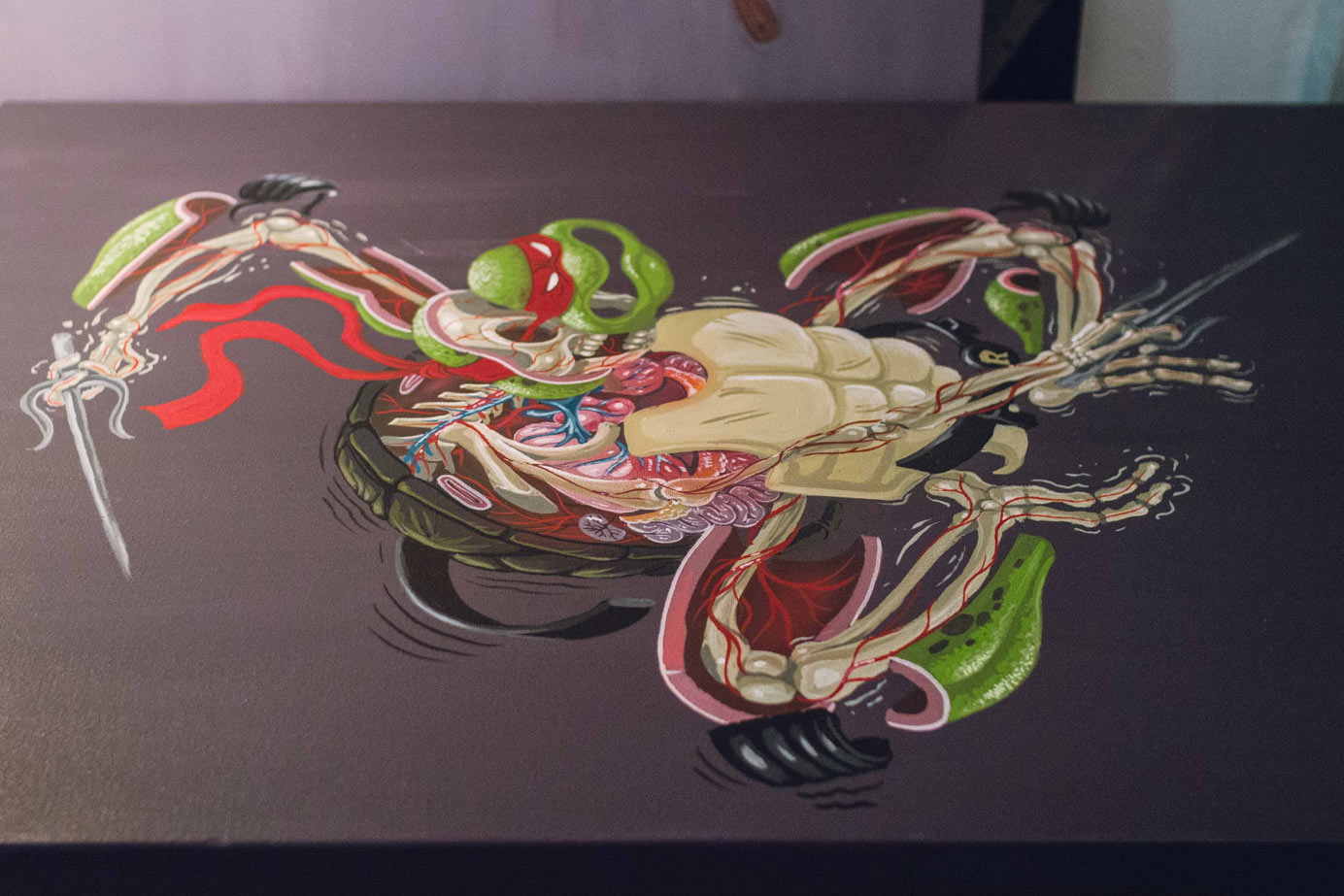 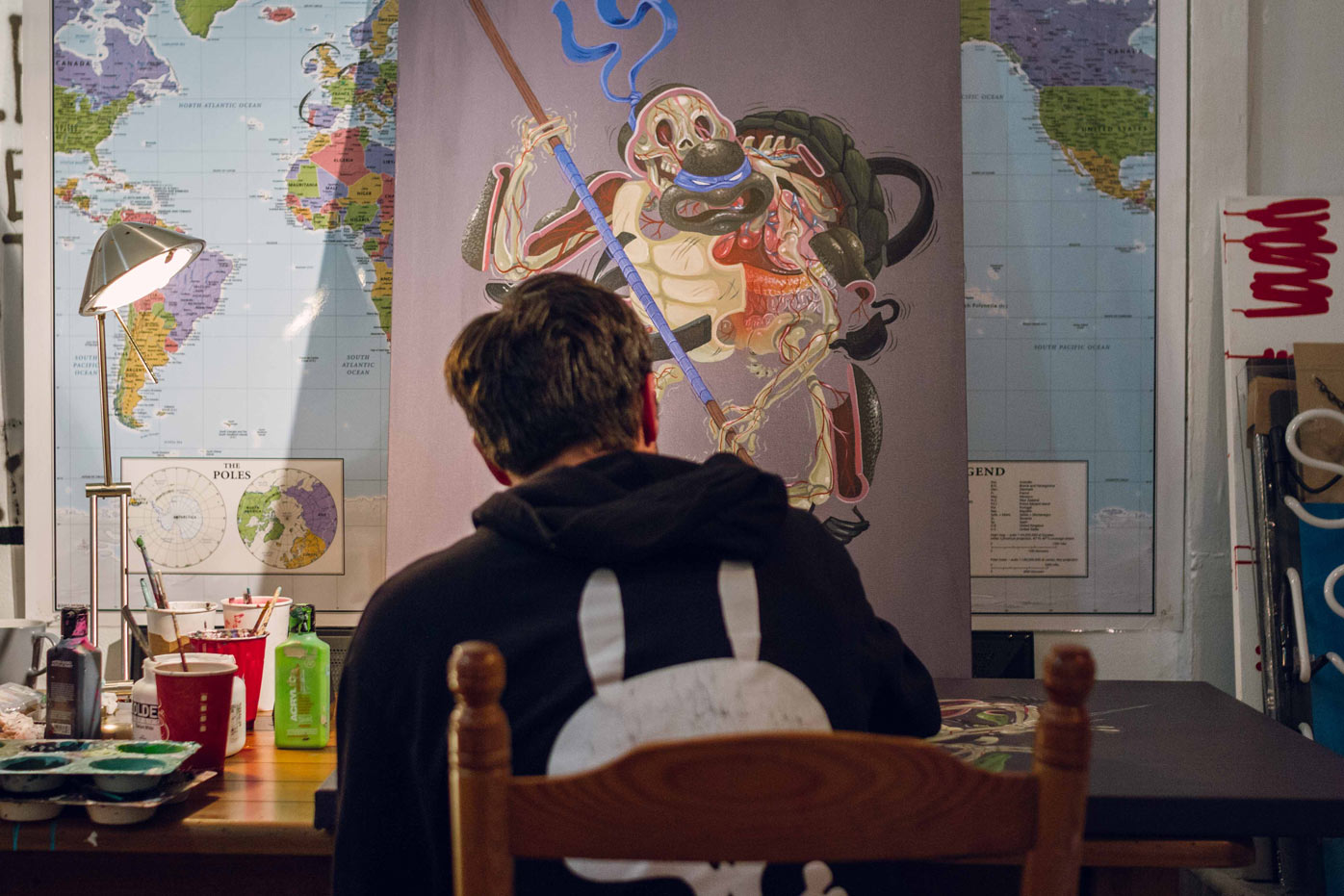 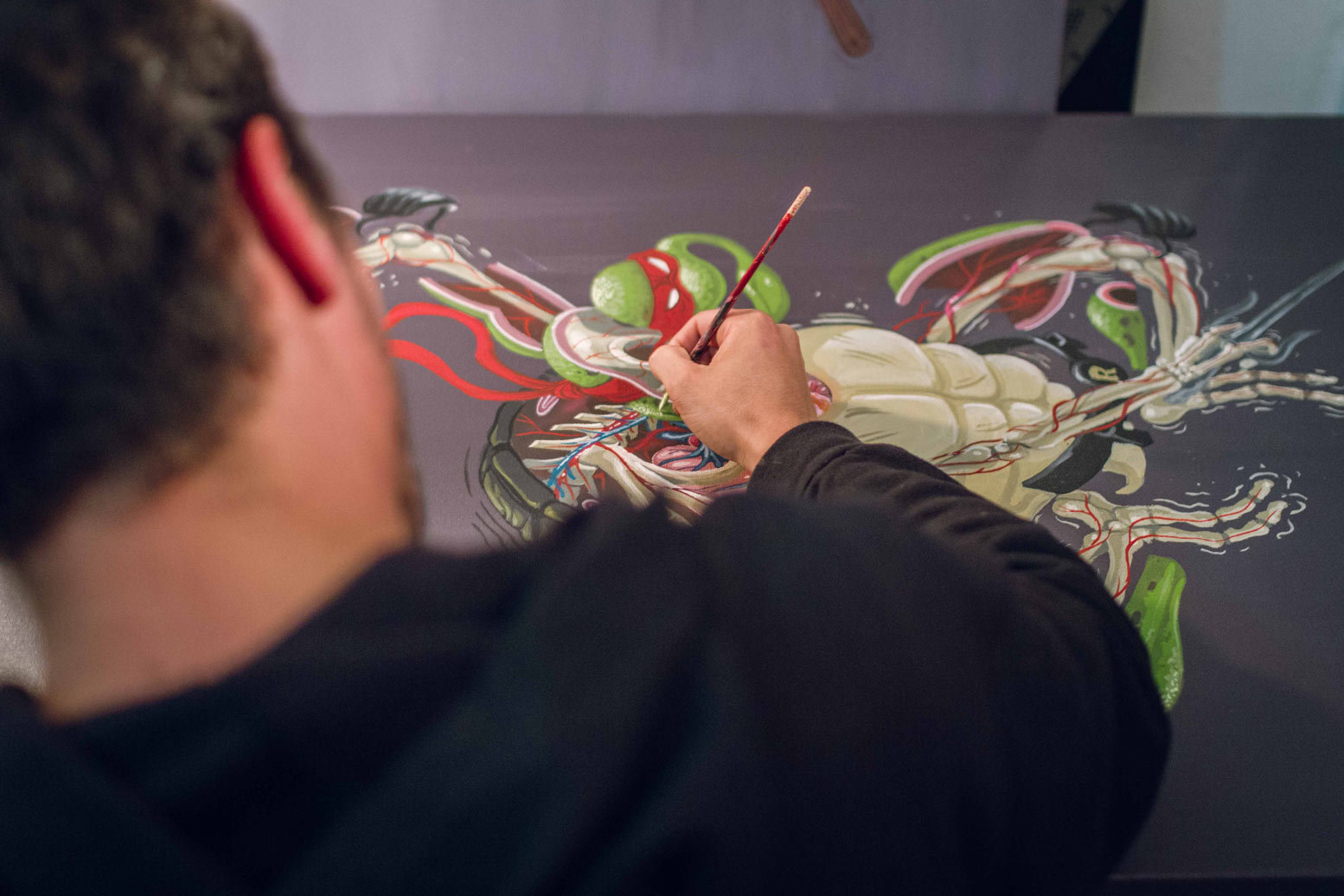 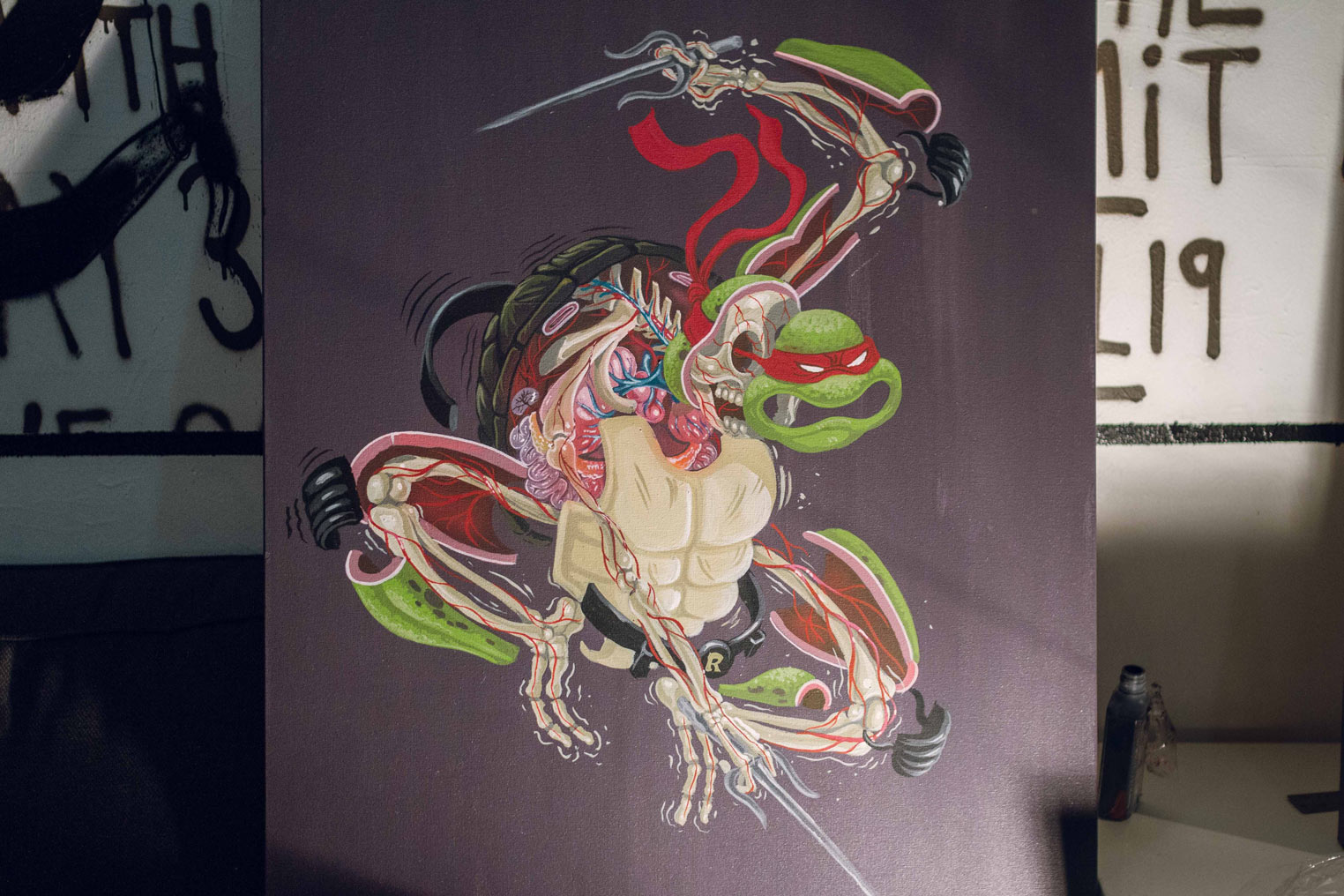 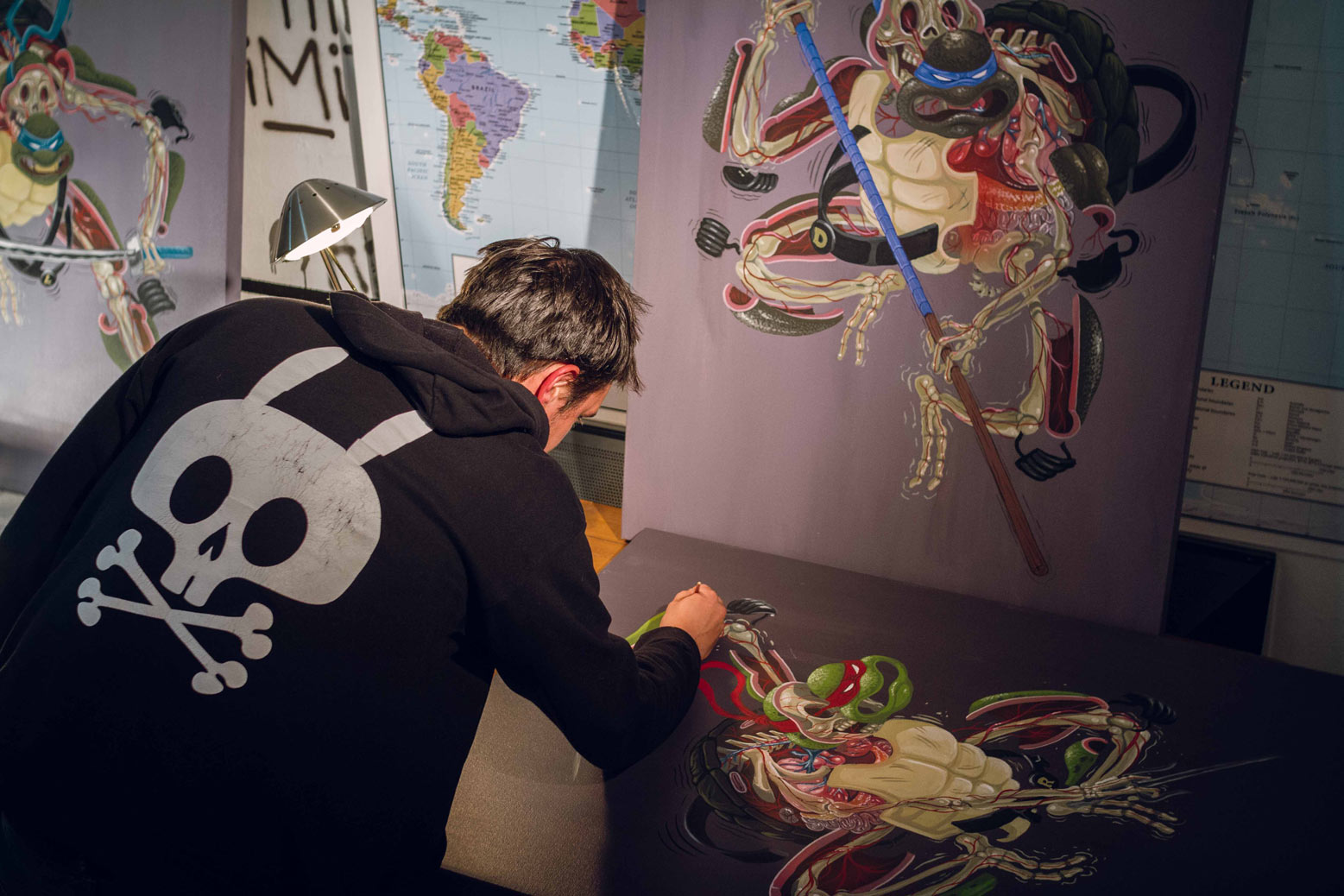 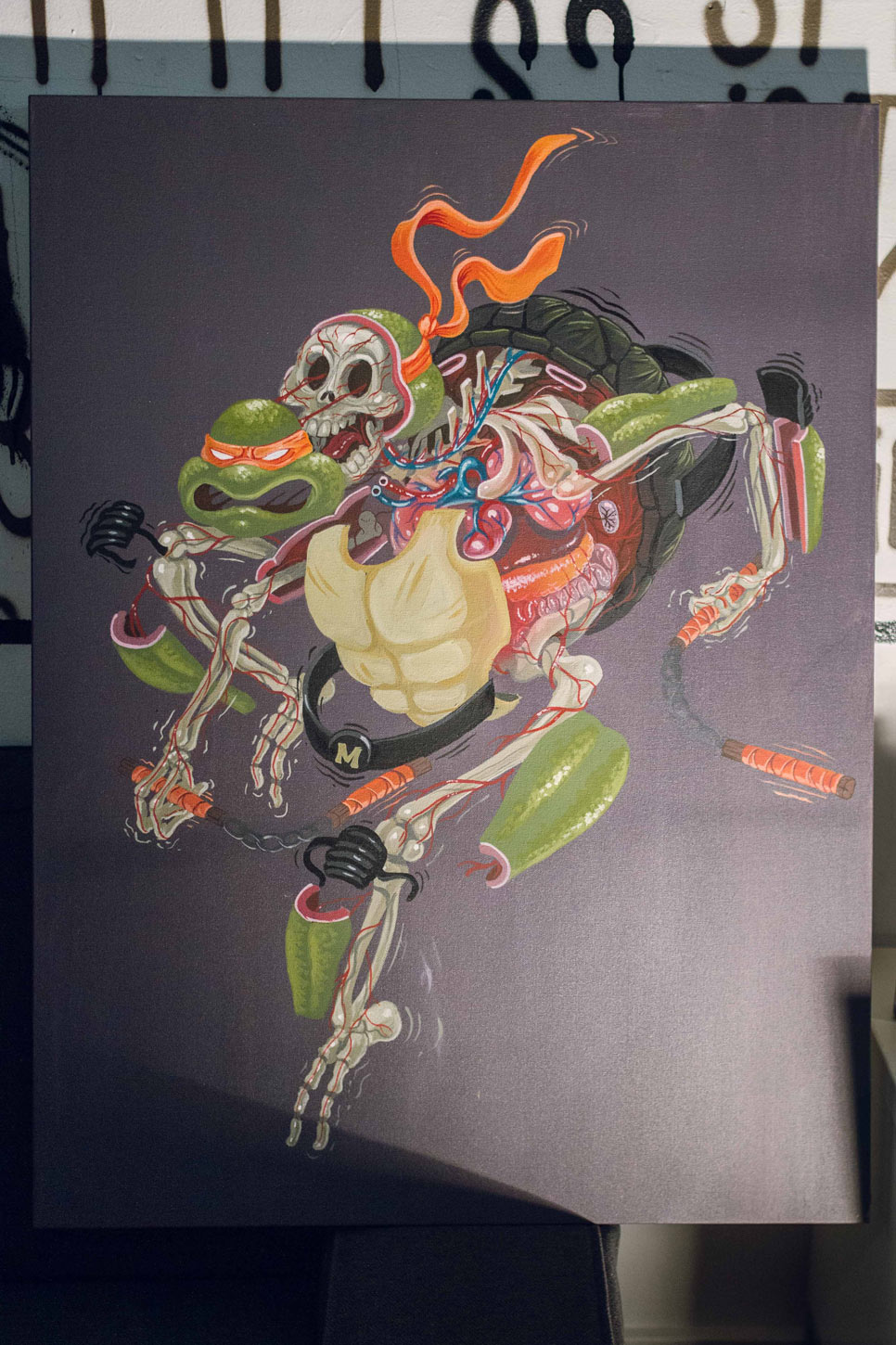 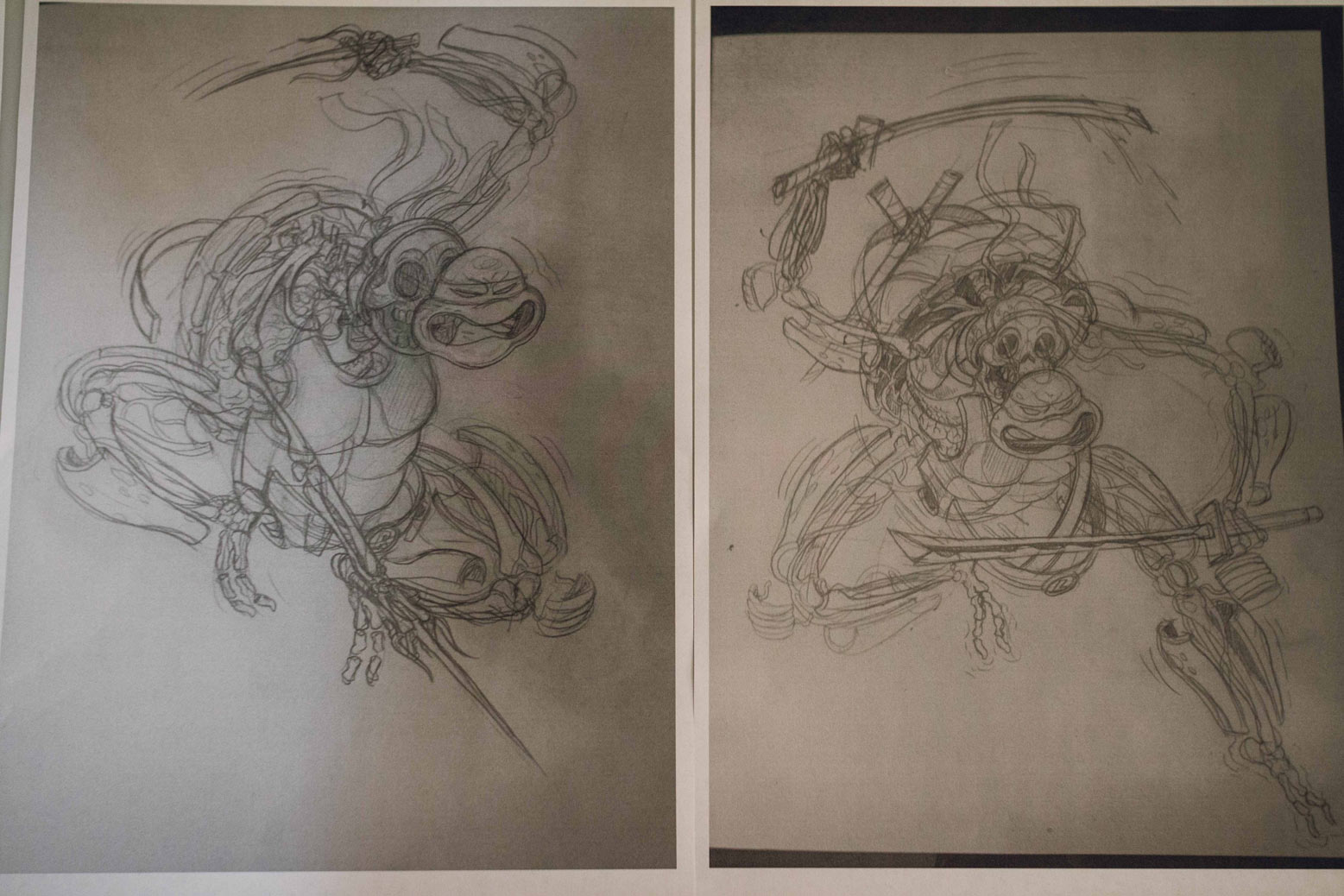 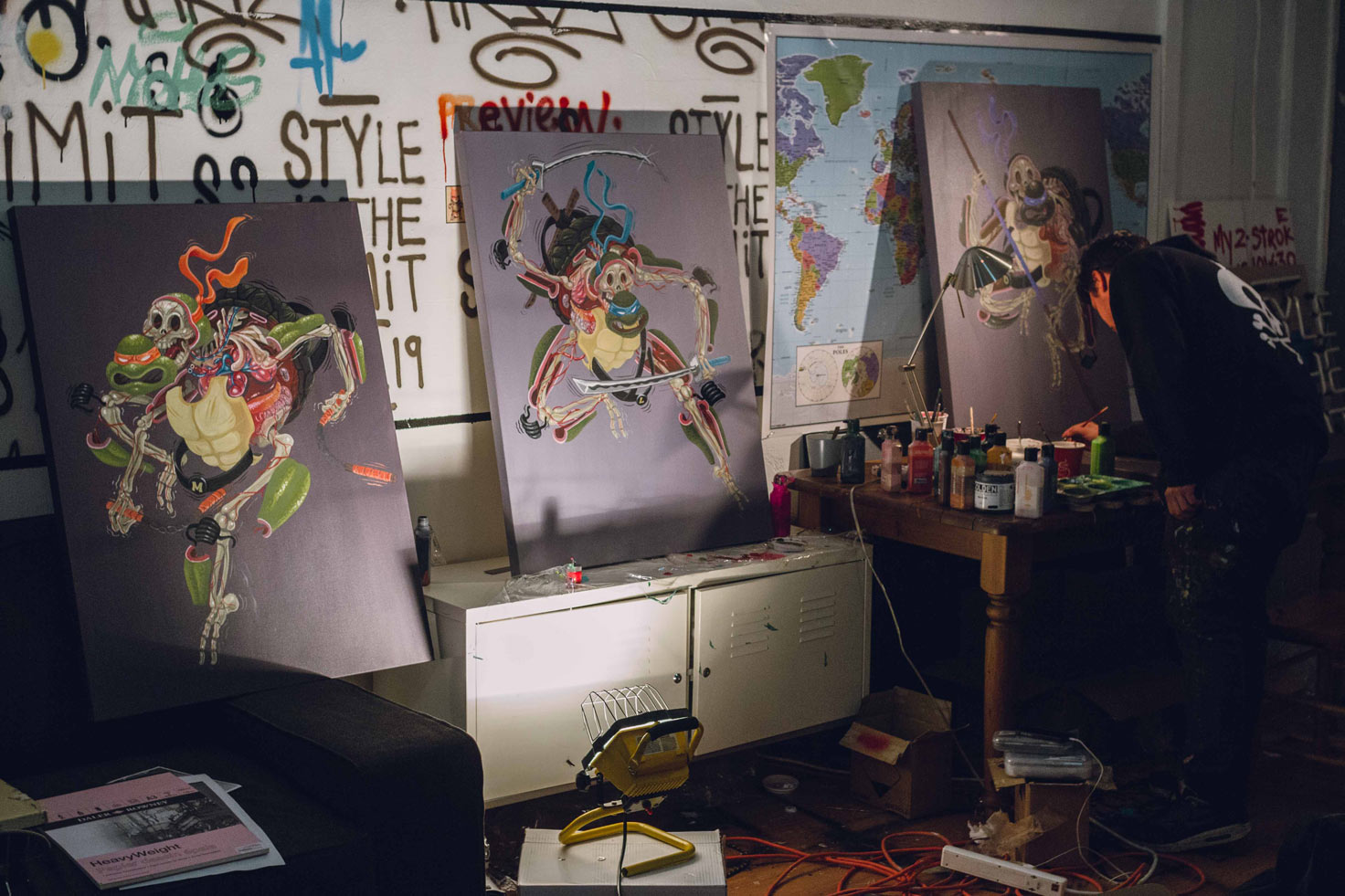 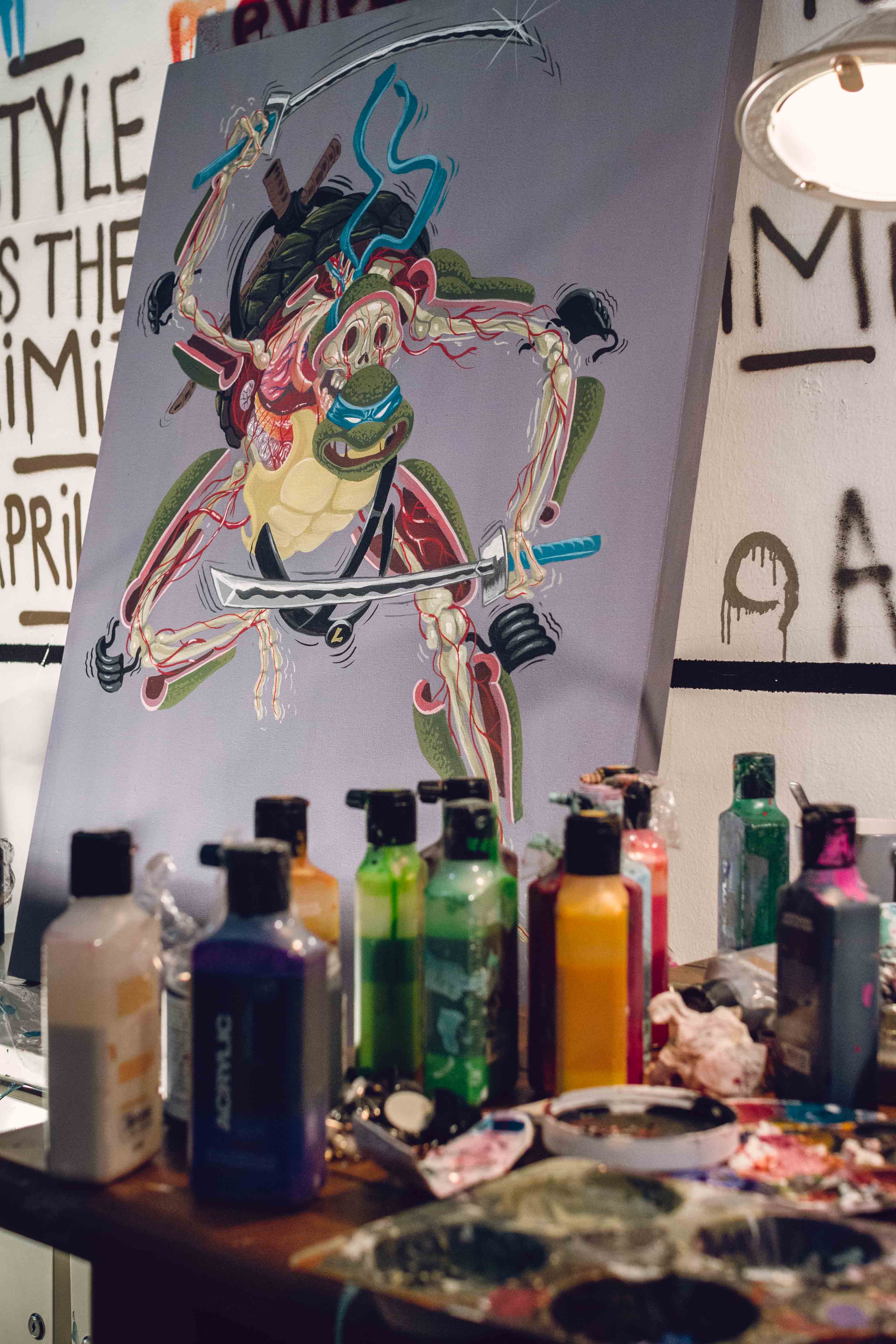 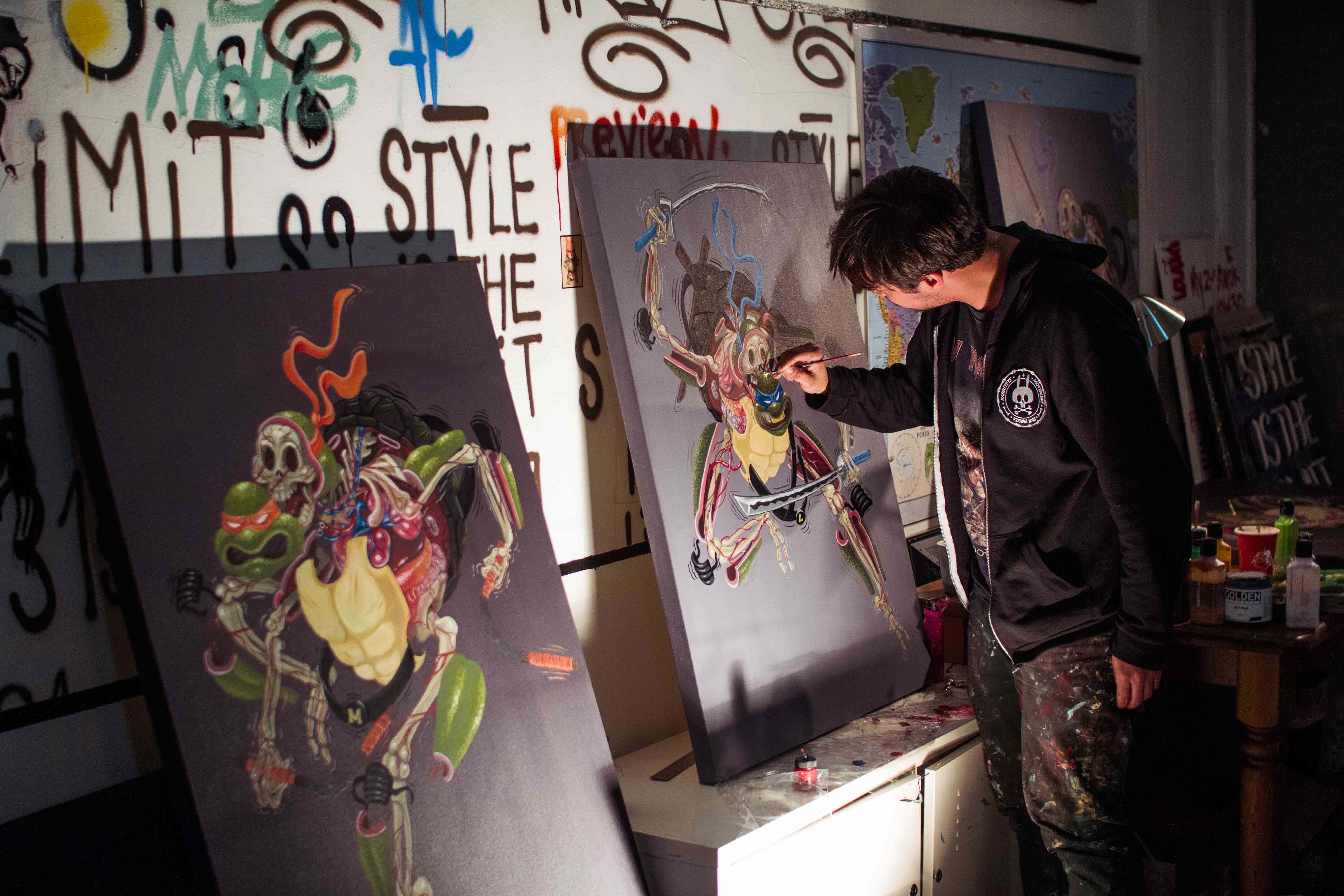 With his solo show, "Street Anatomy," opening at Fifty24SF Gallery in San Francisco this Friday, April 18th, 2014, NYCHOS has been quite busy the past few weeks painting murals around the bay area and prepping for the exhibit. We stopped by his temporary studio to catch him as he finishes up several new paintings, get a couple pictures, and ask him a few questions!

With his solo show, "Street Anatomy," opening at FIFTY24SF Gallery in San Francisco this Friday, April 18th, 2014, NYCHOS has been quite busy the past few weeks painting murals around the bay area and prepping for the exhibit. We stopped by his temporary studio to catch him as he finishes up several new paintings, get a couple pictures, and ask him a few questions!

Lauren YS: Let's get right to it then--why did you start making art?
NYCHOS: I always wanted to be a comic artist or character designer because I like to laugh at myself when I draw. Art has to be funny but it also has to give something back to you. It always has to tell a story. The hard part is to find something you want to talk about with your art. For me it was always there, but for a long time I didn’t realize what it was.
So that’s where the anatomy comes in?
Yup! I grew up in the south of Austria and I needed to keep warm in the winter, so I killed a deer, cut it up and slept in its carcass. Ha! No, let’s be serious. I was always interested in how the body worked. I was so into skeletons--my dad and grandpa were both hunters, so looking at a deer skeleton was daily business. It was normal to me.
You kept the whole skeleton?
Just the heads. We kept them as a trophy, always had them around. I would sit and sketch all the bones, and I remember thinking, “how does this work?” I remember I was maybe 3 or 4 and my dad killed a deer and brought it back home. I watched him cutting its belly open and all the intestines, all the guts and everything just fell out and it smelled like crazy. I asked my dad, “What is this?” and he explained, this is the digestive tract where you eat things before you go caca. Here’s the liver, lungs, heart. It smelled so bad you could barely keep the dogs from it. In my family it was important to know about hunting. It’s not just going out to kill, you have to go through many steps before you can eat. It’s a crazy process—much harder than just going to the supermarket where you buy a steak and you don’t even realize that this is a muscle.
Did you ever go hunting?
One day when I was twelve, my dad took me out. I shot a fox, and that’s when the hard part started. I had to carry it home and then cut it open and take out all the organs, and then you have this empty thing hanging there. You want to keep the fur as untouched as possible so you start skinning off, and I remember pulling my whole weight trying to get the fur off the fox. If you're a visual person it totally affects you. I never saw it as disgusting—rather it shows you how much life is worth and how crazy a body really is. It makes you respect other lives, which is why I never became a hunter. I think that’s the last thing I ever killed.
So that’s when you started dissecting things with your art?
I knew I wanted to put this into my art at some point. Just painting a character is boring, why not take it to another level and show how the anatomy works? For a lot of comic characters, it’s not easy to show in a normal body structure. When I was 12 I watched The Little Mermaid. When you're a little kid you kind of get excited watching that movie, and I started to wonder, how does she get laid? How does that work? Does it work like pulling pants down? Is she going to lay eggs? I never really found a resolution. But with the last piece I painted in Linz I tried to kind of get an idea of how it’s built. Her pelvis is still a human pelvis and the rest is still kind of a fish tail. I also dissected SpongeBob for Nickelodeon. I had a lot of fun with the square brain. They also told me not to show any "sexual instruments."

How did you take that?
I wasn’t going to anyway! Spongebob is just worried about his burgers, he doesn’t have any balls! Humor is so important in art. I always wanted to keep that. I always wanted to show things that might be darker or death-related, things that people normally block out of their lives. People are afraid of skeletons. It gives me really interesting reactions when I paint on the streets. You can immediately tell what kind of person this is. Some people see me working and their reaction is “Yeah! I fucking love this.” Someone who is afraid of god might not be so down with it. There’s this controversial flavor that I like to provoke sometimes, but it's not my main goal to fuck with people. I always have the excuse of painting in a comic/cartoony way, but it is funny. Come on! Painting something so serious in this unserious just brings it to the next level.
Do you think you'll be on the anatomy kick forever?
I don’t need to. I haven’t gotten bored yet, but if I do somehow then I will find a new way, like playing with cross-sections and the X-Ray stuff I’ve been doing. It’s more about pushing the style to the next level rather than the concept. It’s going to get more detailed and more crazy and there will be loads more bone breaking and exploding going on and every organ in itself can be dissected again—it’s gonna be fun.
How did you end up painting on such a huge scale?
I started painting graffiti because when you're 15 you don’t want to sit at home and hold a brush. I’m not a patient persona and I like to get a quick result with the spray can. But it took me ten years to get a proper feeling for colors. Coming from black and white comics, I had to work so hard to get rid of my outline. Thinking as a cartoonist is totally different. Working on a big scale developed with my graffiti. As your style and colors develop, your patience develops also. It’s a slow push and then suddenly you paint a huge piece. Sketching it up and thinking about it as a cartoonist first makes it a bit easier. This method just developed in the last 3-4 years... getting bigger, adding more detail, having fun with the fat cap, and suddenly you’re just standing in front of a piece in the center of San Francisco that you never thought you were going to paint. 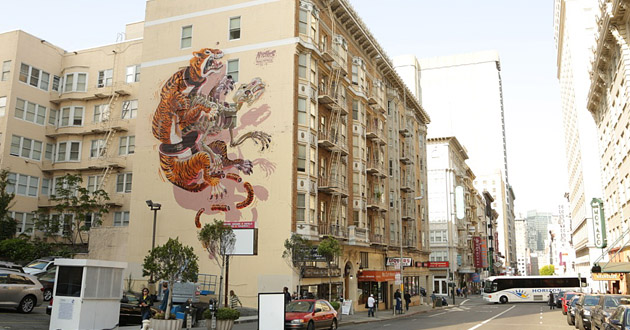 How did Rabbit Eye Movement come into being?
Rabbit Eye Movement is my art space in Vienna. It’s a concept I started in 2004 after I just I had a really personal encounter with the white rabbit, which will be revealed in a book we’re doing next year to tell the whole story. Back then when I started painting rabbits I remember the first one I did was already rotten and bones were coming out and it was really more disgusting than I do now. There was a lot of blood. From painting on the streets it developed to the really simple shape that I can paint in 2 minutes, and I started putting it out there for two years. It got famous really fast but at that time I didn’t do much art-wise. It was strictly a street art mission—logo dropping—which was normal back in 2005, but it didn’t make me happy really. I wanted to tell more of a story. Finally it got to a point where a whole team was working on it, and it became a label, a brand. Now we have this little art space in the center of Vienna. It’s connected to my studio so we’re always there, making videos showing what we do, what other artists do. It functions like an agency for art painting or illustration jobs. We are also currently producing a documentary called “The Deepest Depths of the Burrow,” which is about traveling and meeting other artists, about the lifestyle of an urban muralist and how this art form connects them.
Which ninja turtle are you?
Leonardo. He knows what’s going on, and he has a plan. He reflects while the others are just having fun.
Would you donate your body to science?
I don’t have any tattoos yet because I decided, I’m not going to be stupid, I’m not going to get a tattoo before I'm 30. Now I was thinking I’m going to start getting tattooed and when I’m 150—because that’s how old I’m going to get and still be beautiful, no wrinkles, I’ll have white fur though, but that’s alright—I’m going to be covered with tattoos and when I die they will skin it off and they’ll put it up in a gallery and this will be my last, greatest art piece. 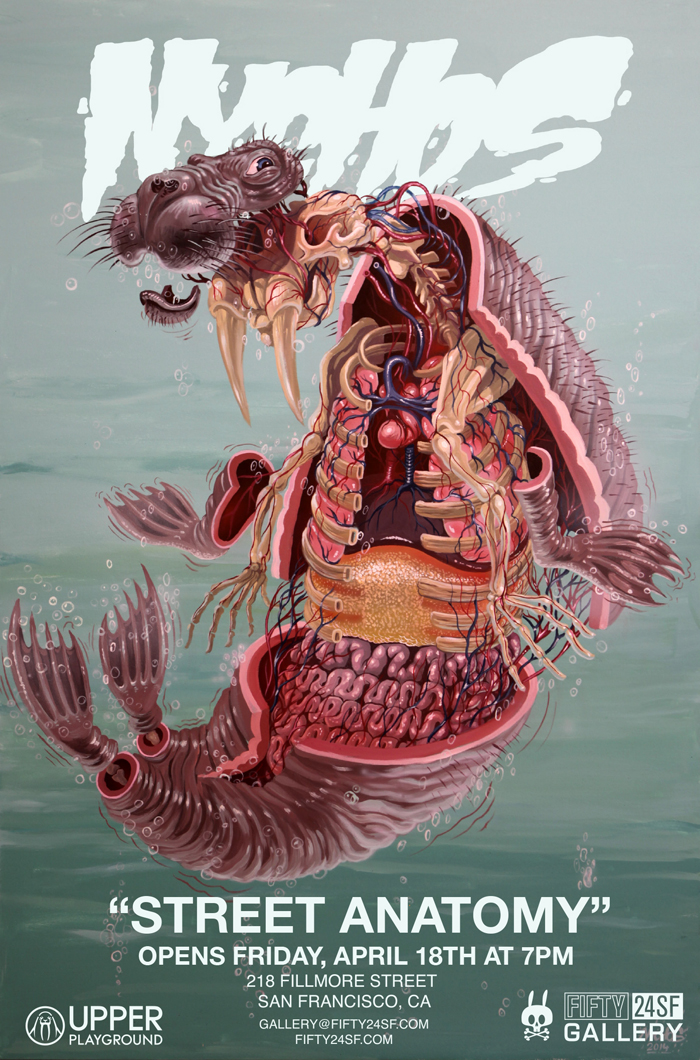