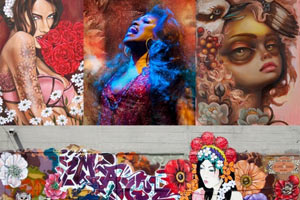 Cassel Gallery and Goorin Bros. Hat Company are proud to present, Flora N Fauna, curated by Amandalynn. By definition, Flora and Fauna means Nature, the environment of plants and animals living around you. Amandalynn has been inspired by this subject matter her whole life, spending much of her childhood hiking through the woods, finding and identifying different types of wild flowers and forest creatures. 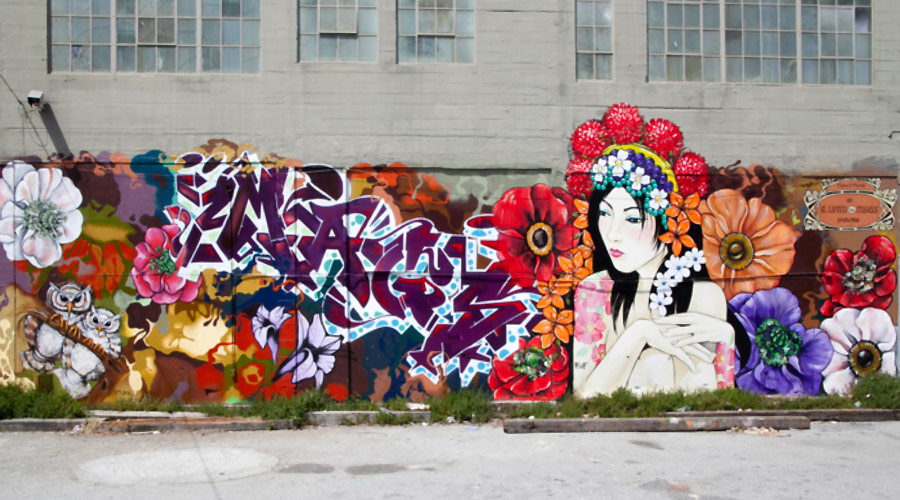 Cassel Gallery and Goorin Bros. Hat Company are proud to present, Flora N Fauna, curated by Amandalynn. By definition, Flora and Fauna means Nature, the environment of plants and animals living around you. Amandalynn has been inspired by this subject matter her whole life, spending much of her childhood hiking through the woods, finding and identifying different types of wild flowers and forest creatures. As her course of life has brought her to the West Coast, she has met and been inspired by many artists who are enticed by similar themes in their artwork. One extremely influential artist and cohort is Renee Fontana, a floral designer and visual display artist based out of Los Angeles, CA. Renee and Amandalynn are collaborating with Lady Mags and several of the other participating artists, to create a large scale mural installation within the gallery, and adorning it with live flowers.

Throughout 2012, Lady Mags and Amandalynn focused on the theme of Flora and Fauna. The pair designed and executed a large-scale mural production in the Mission district in San Francisco, in an effort to bring the beauties of the natural world to the city streets. The mural serves as the inspiration for the Flora N Fauna exhibition. Flora N Fauna exhibit artists Erin Ashford and Nick Lea Bruno, beautifully documented the production of the mural. Nick and his partner, Dorian Young, created a video piece highlighting the 'Flora N Fauna' mural, taking a look within the artists' studio, and going on an outdoor mural adventure into the woods with Mags and Amandalynn.

Tatiana Suarez based out of Brooklyn, NY is known for her seductive imagery of female characters found not only hanging in galleries but also in many street art productions.Gloria Muriel aka Glow, is also known for her street art and fine art. Her mysteriously alluring characters denote a sense of magical wilderness, fitting to the Flora N Faunatheme. Meme, the organizer of the all female street art collective, Few and Far, will be showcasing some very innovative sculptures adorned with flowers and feathers. Evan Kolker, also a sculptor, creates botanical, carnivorous pieces out of blown glass. Lindsey Millikan will be bringing the Fauna imagery to the show, with her creative and well-executed pigeon paintings. Christa Baker, the official Goorin Bros. custom hat and hair fascinator expert, will be creating one-of-a-kind pieces for Flora N Fauna. Christa's creations can be seen in action at Goorin Bros. Custom Hat Shop in North Beach, San Francisco. Robin and Mouse Grass are two prolific painters based out of Pennsylvania. They have taught and inspired Amandalynn and her family for decades now, and she is very honored to have them participate in Flora N Fauna. Megan Shaffer is known for her detailed paintings of creatures, and has participated in several shows with Amandalynn, always bringing a delicate touch to the exhibitions.


Amandalynn has been inspired and encouraged her whole life through close friends and family, and she always loves working in close relation with them. Amandalynn's sister, Margaretta, is an extremely talented artist, ranging from fine art painter to custom furniture builder. Margaretta will be showcasing some of her work, as well as assisting on many of the displays and installations. Their mother, Sue Grazier, also a fine art painter, will have her work on display as well. Flora N Fauna is overflowing with amazing imagery and installations. The opening evening will be a memorable experience for all who attend and participate. The live musical performance featuring Kathryn Hodges and Monique Hernandez Fuentes is not to be missed.